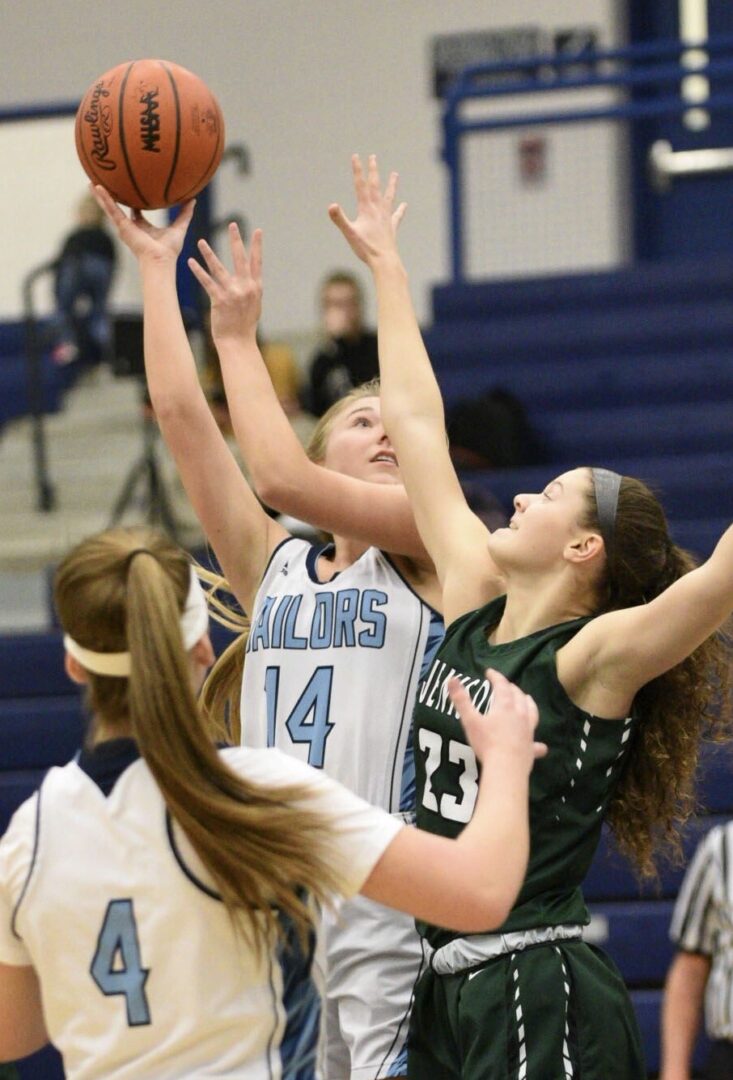 On Friday the Sailors stunned Muskegon, one of three teams that was tied for first in the conference.

On Tuesday they were at it again, nipping Jenison, another conference co-leader, 36-34 in a thriller at Mona Shores High School.

That leaves R-P alone at the top of the standings with one game to go. The Rockets can clinch the championship with a win on Friday.

It the Rockets end up winning the title, they can thank a Mona Shores squad that showed a lot of poise down the stretch on Tuesday.

With under 10 seconds to play, the Sailors held a 35-34 lead, but Jenison star Ally VanTimmeren had the ball in the paint with a chance to score.

But the Sailors collapsed on defense and VanTimmeren’s shot was blocked.

After gaining the ball via the possession arrow, Mona Shores senior Megan DeLong was fouled on the inbounds pass with 4.1 seconds remaining.

She made one free throw before missing the second, but the one proved to be enough.

“I did the same thing last week,” said DeLong, who also sealed the upset win over Muskegon at the free throw line. “It gave me more confidence going into it.” 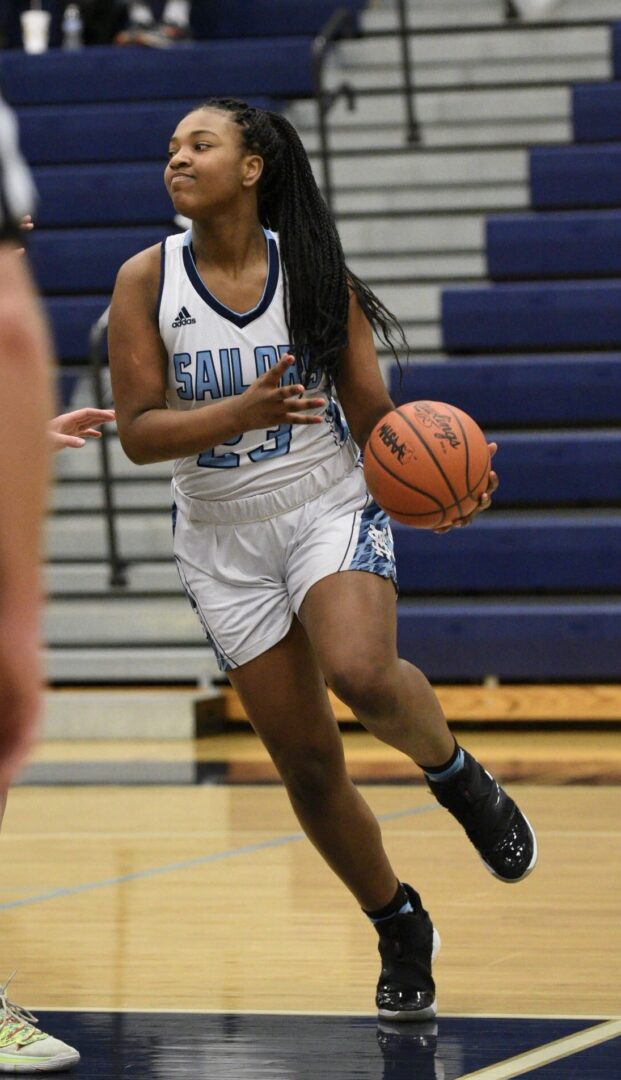 The rebound from the missed free throw was gathered up by Mona Shores’ Bri Wade, who attempted to score but missed. Wade’s shot was rebounded by teammate Brooke LeRoux, who ran out the remaining time.

As the clock hit zero, the Sailors bench exploded with joy over their fourth straight victory.

“It’s very exciting,” said Mona Shoes head coach Mike Phillips about the recent success his team has had after losing six games this year by five points or less. “We’ve taken a leap to where we wanted to be. It’s taken three quarters of the season, but we’re in a good place.”

Mona Shores’ success left Jenison with a final 9-3 conference record. Reeths-Puffer, 9-2 after beating Kenowa Hills on Tuesday, can sew up the outright championship with a win on Friday.

“The nice thing is we can go into these games with nothing to lose,” said Phillips about his team’s spoiler role. “The kids get to play a little more loose, so they go out and have fun.”

The two teams started out even on Tuesday night, with Mona Shores holding a 14-13 lead after one quarter thanks to a 7-0 run over the final two minutes. LeRoux led the Sailors with five points in the opening quarter.

VanTimmeren scored all seven of her team’s points in the second quarter, but Mona Shores was able to extend the lead to 23-20 at halftime.

Sophomore Olivia Sobczak had six points for the Sailors in the third quarter, and they clung to a 31-30 lead headed into the fourth.

Scoring was limited in the final eight minutes. Mona Shores outscored Jenison 5-4 to  pull out the win.

VanTimmeren led all scorers with 18 points. Sobczak scored 11 points while LeRoux added seven for the Sailors.

“It feels amazing,” said DeLong about about her team’s first win over Jenison since Jan. 5, 2018. “It’s something that us seniors have wanted for a long time. It feels great to get over that hump as a team.” 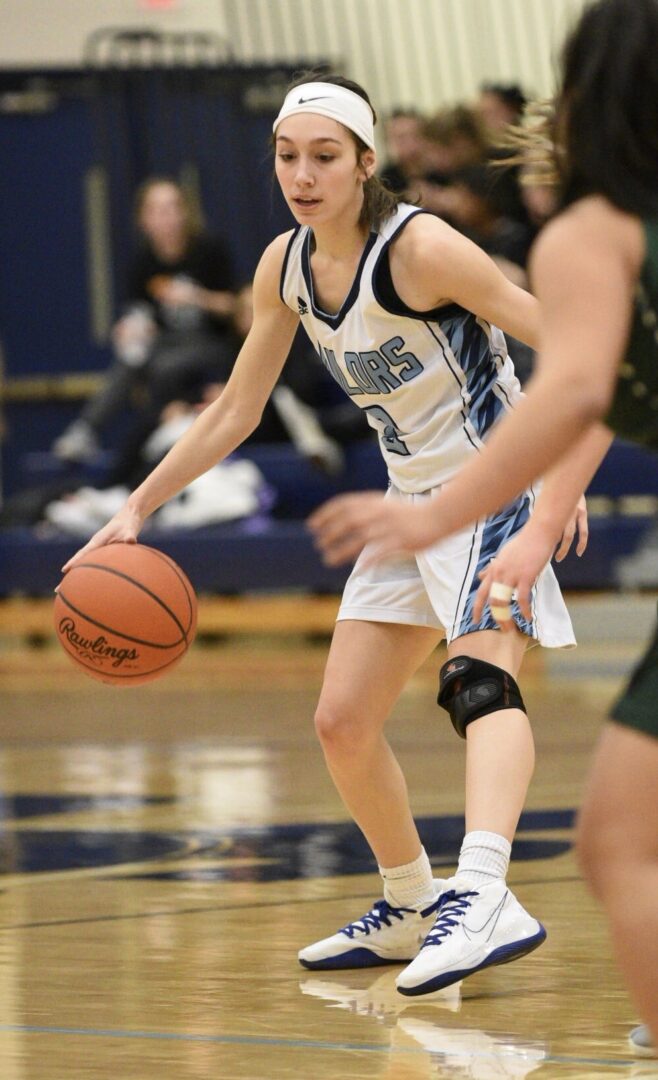 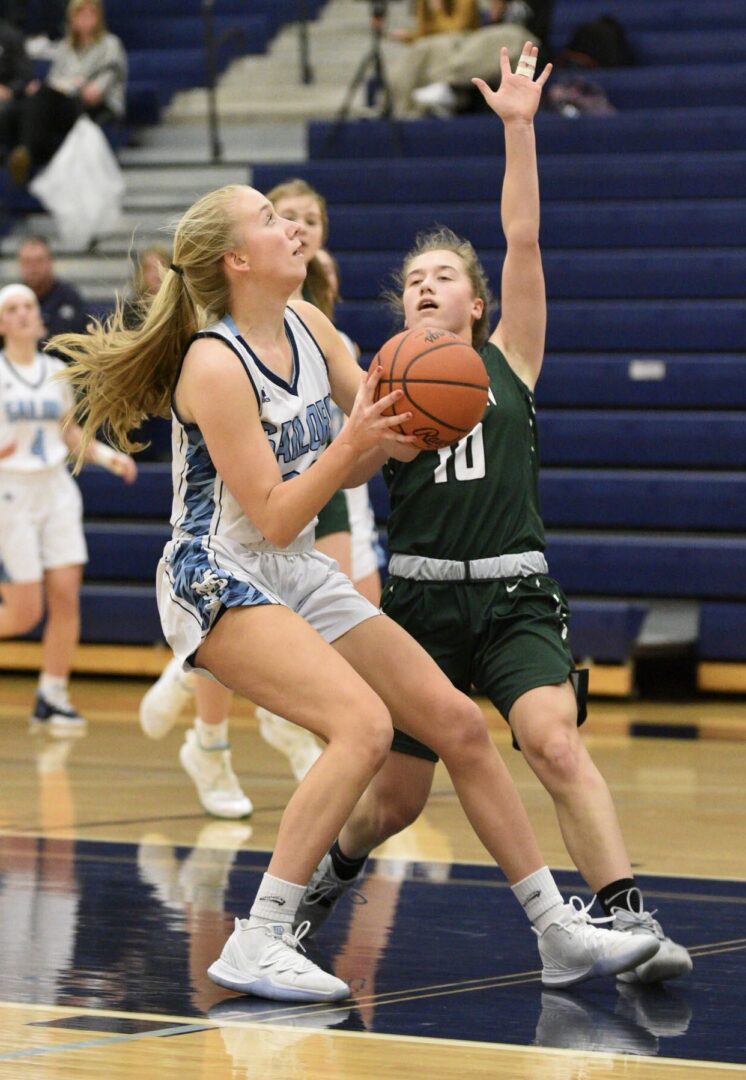 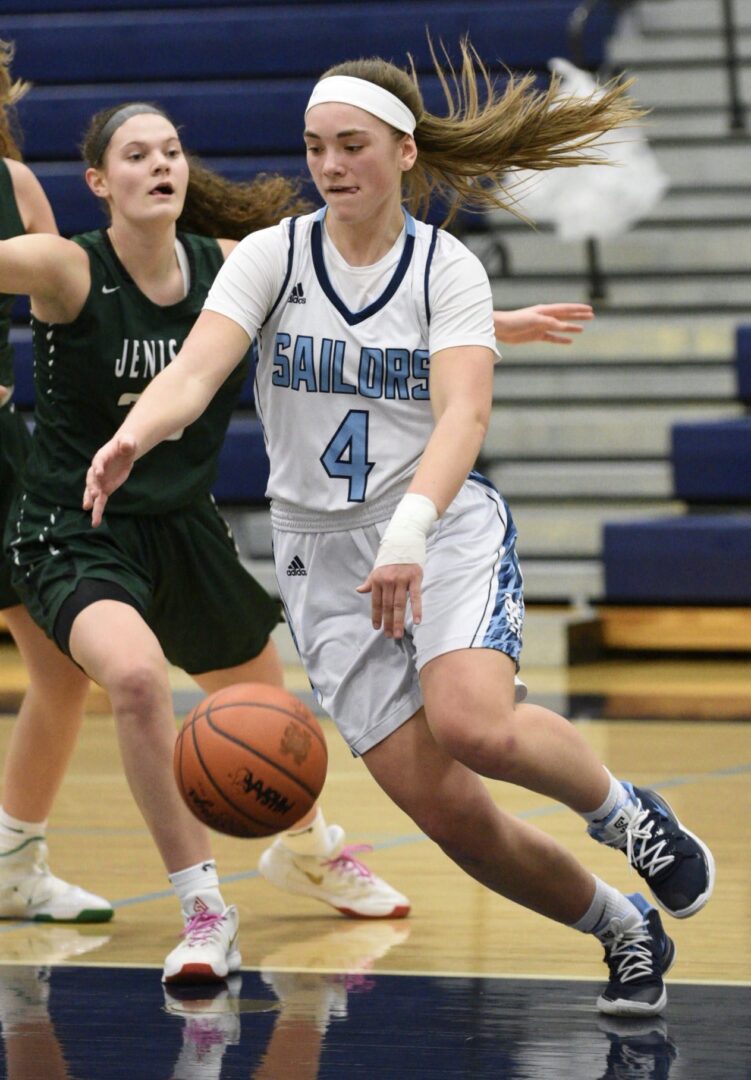 Brooke LeRoux moves the ball up the floor for Mona Shores. Photo/Marc Hoeksema 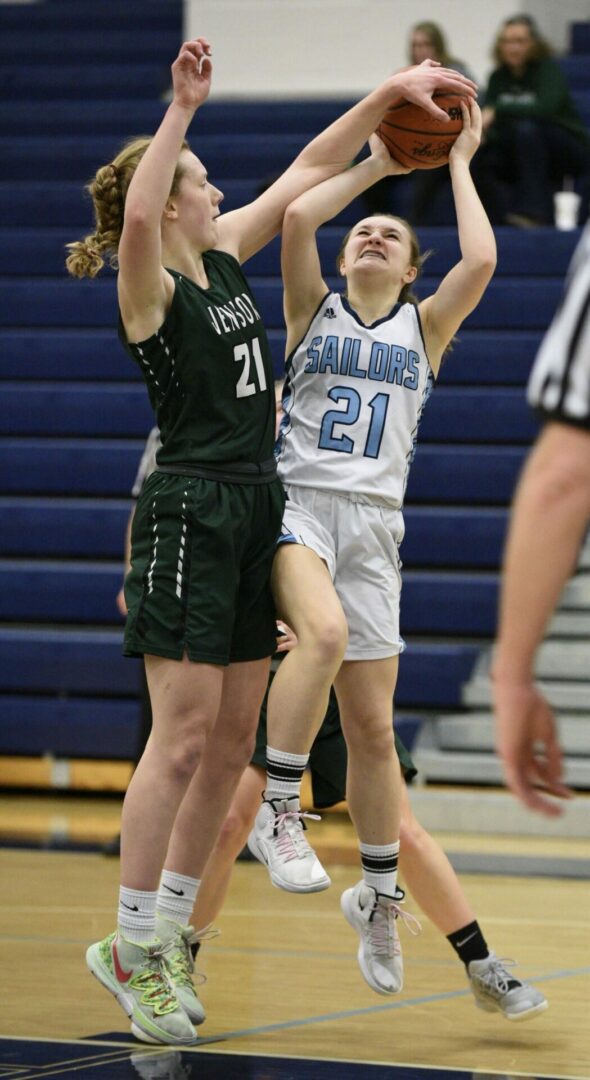 Jenna Tierman tries to go to the hoop for Mona Shores. Photo/Marc Hoeksema 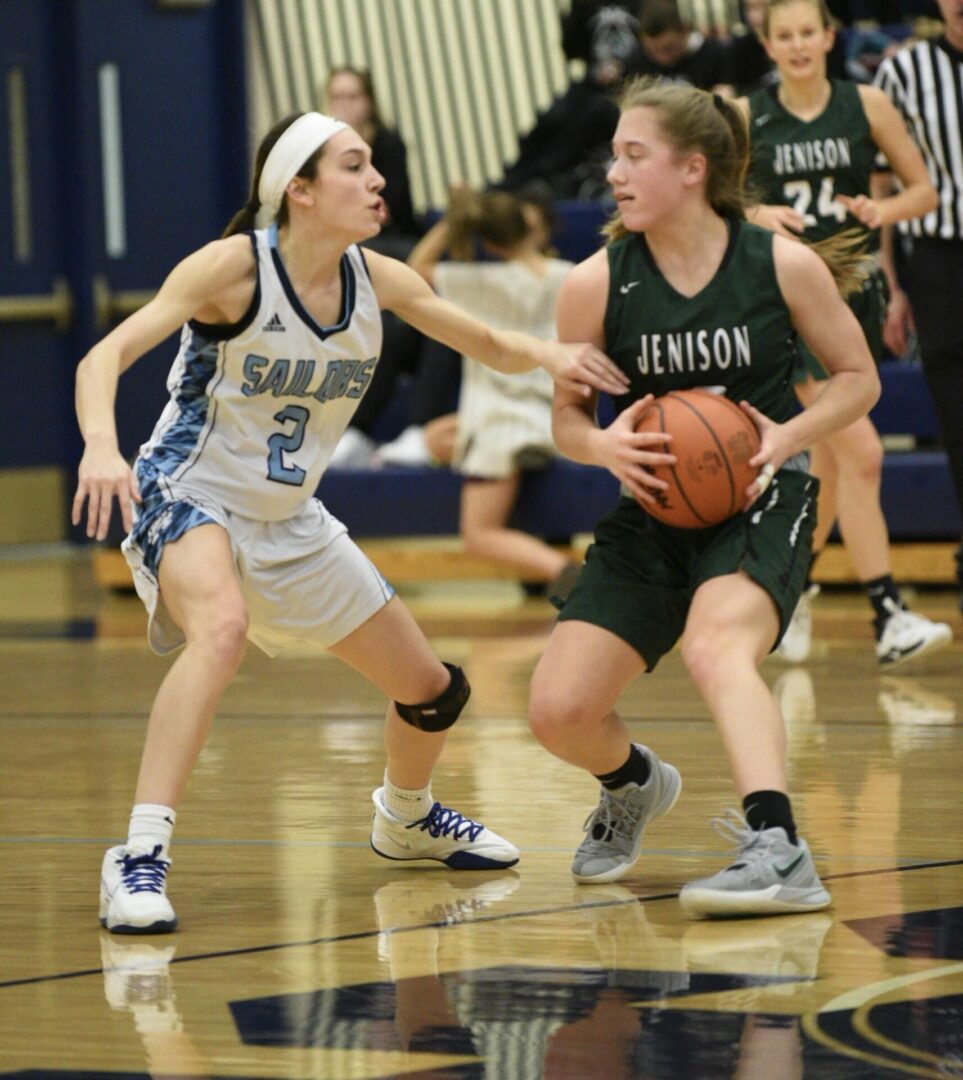 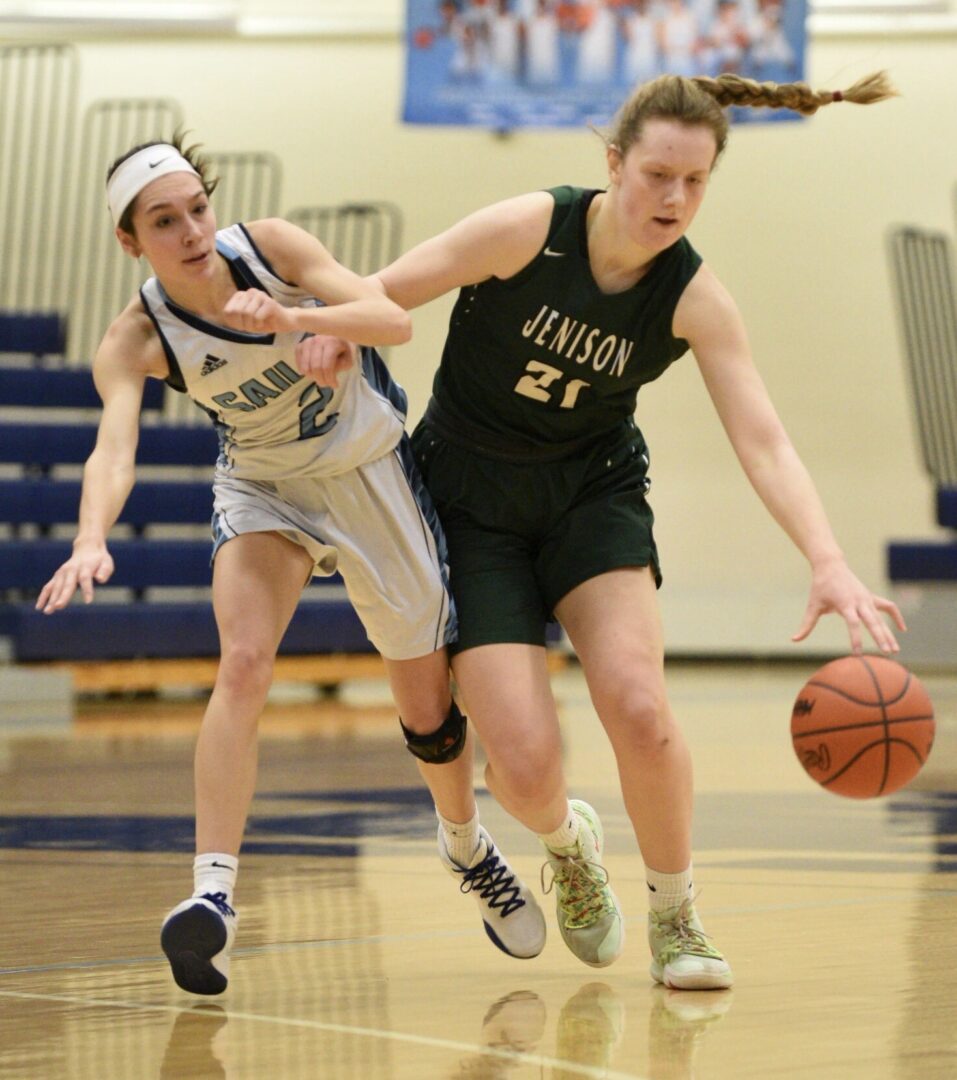