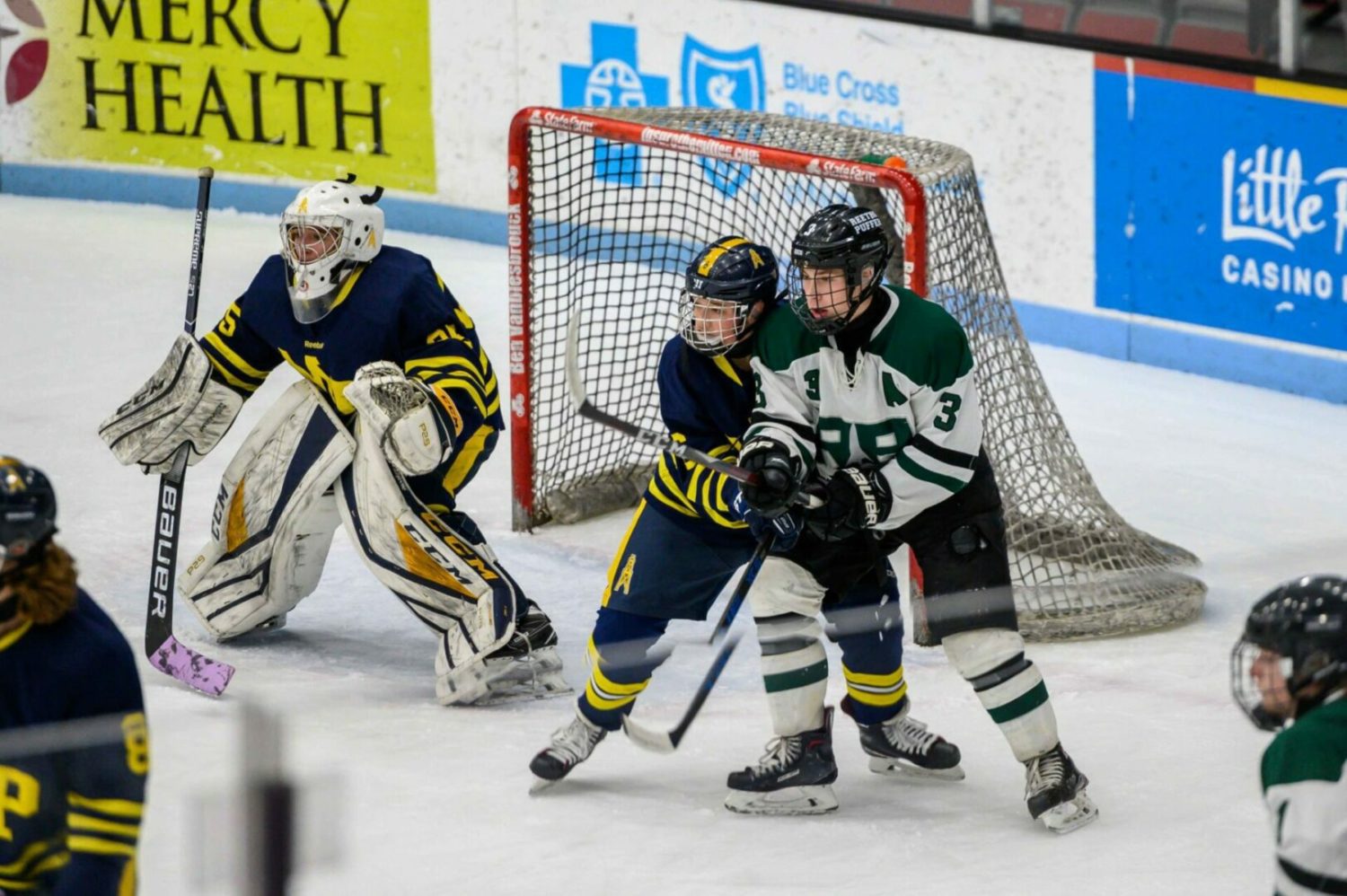 MUSKEGON – Good teams know how to step on the gas and get things done when opponents throw up unexpected challenges.

They also know how to take full advantage when an unexpected opportunity comes along.

The Reeths-Puffer hockey squad is clearly a good team, and did both of those things on Saturday. After giving up an early two-goal lead, the Rockets fired back with four unanswered goals to claim a 6-2 victory over Mount Pleasant on Saturday at Mercy Health Arena in Muskegon. 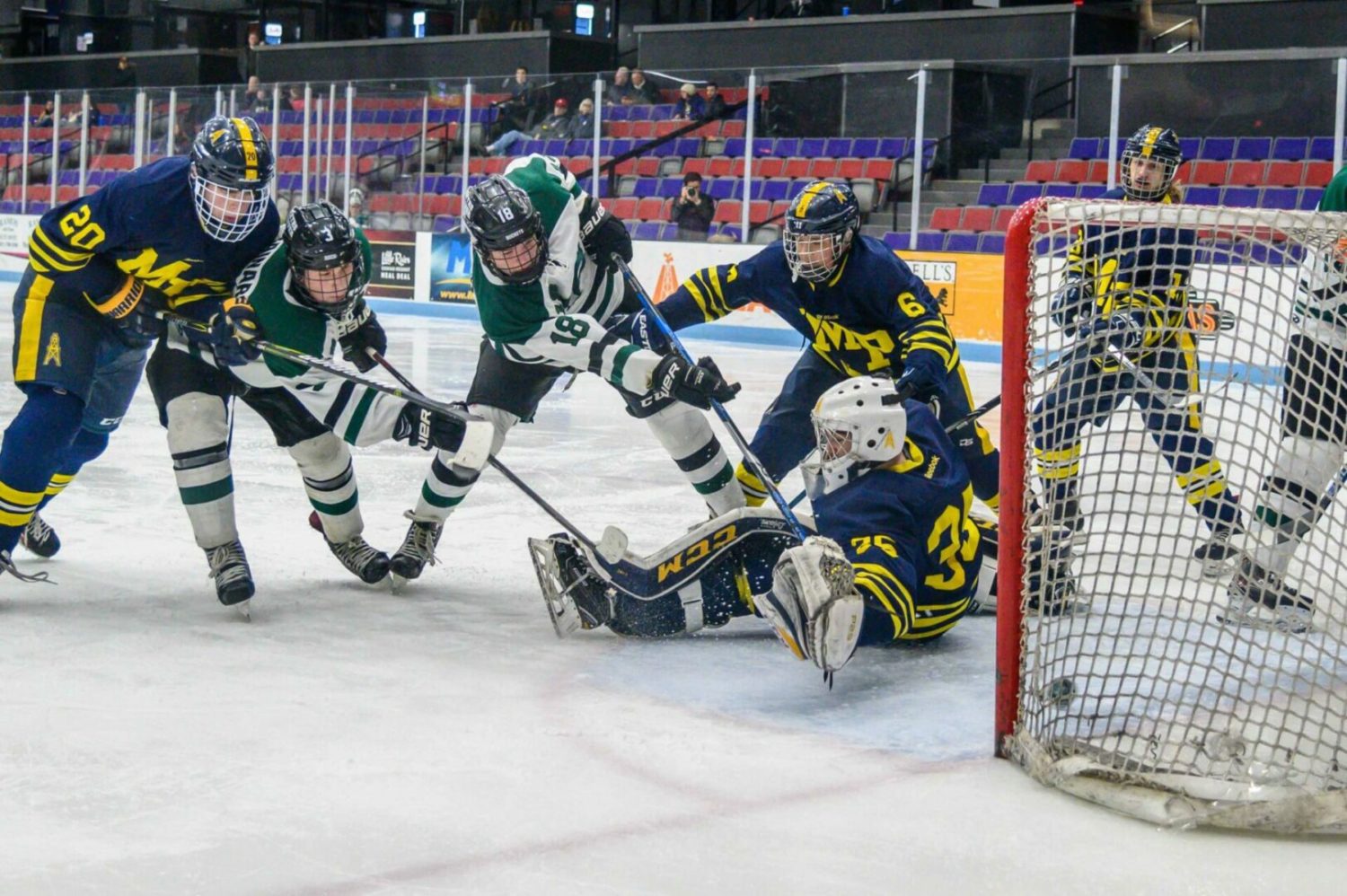 The victory ended Reeths-Puffer’s losing streak at one game and improved its record to 13-6-2. The Rockets will host Rockford on Wednesday.

“We’ve been struggling all year coming out and trying to get going quickly,” said Reeths-Puffer Coach Bill Zalba. “For some reason, we just can’t seem to get the motor running right in the first 10 minutes of the game. We go up 2-0 then we just fall asleep. It’s mental lapses and that’s what we have to clean up.”

R-P forward Quinn Fowler gave his team an early 1-0 lead with a power play goal off a dish from captain Nolan Convertini 5:18 into the first period.

Less than a minute later, senior Connor Hilliker found the back of the net with Caden Brainard assisting, extending the lead to 2-0 at the 6:12 mark. 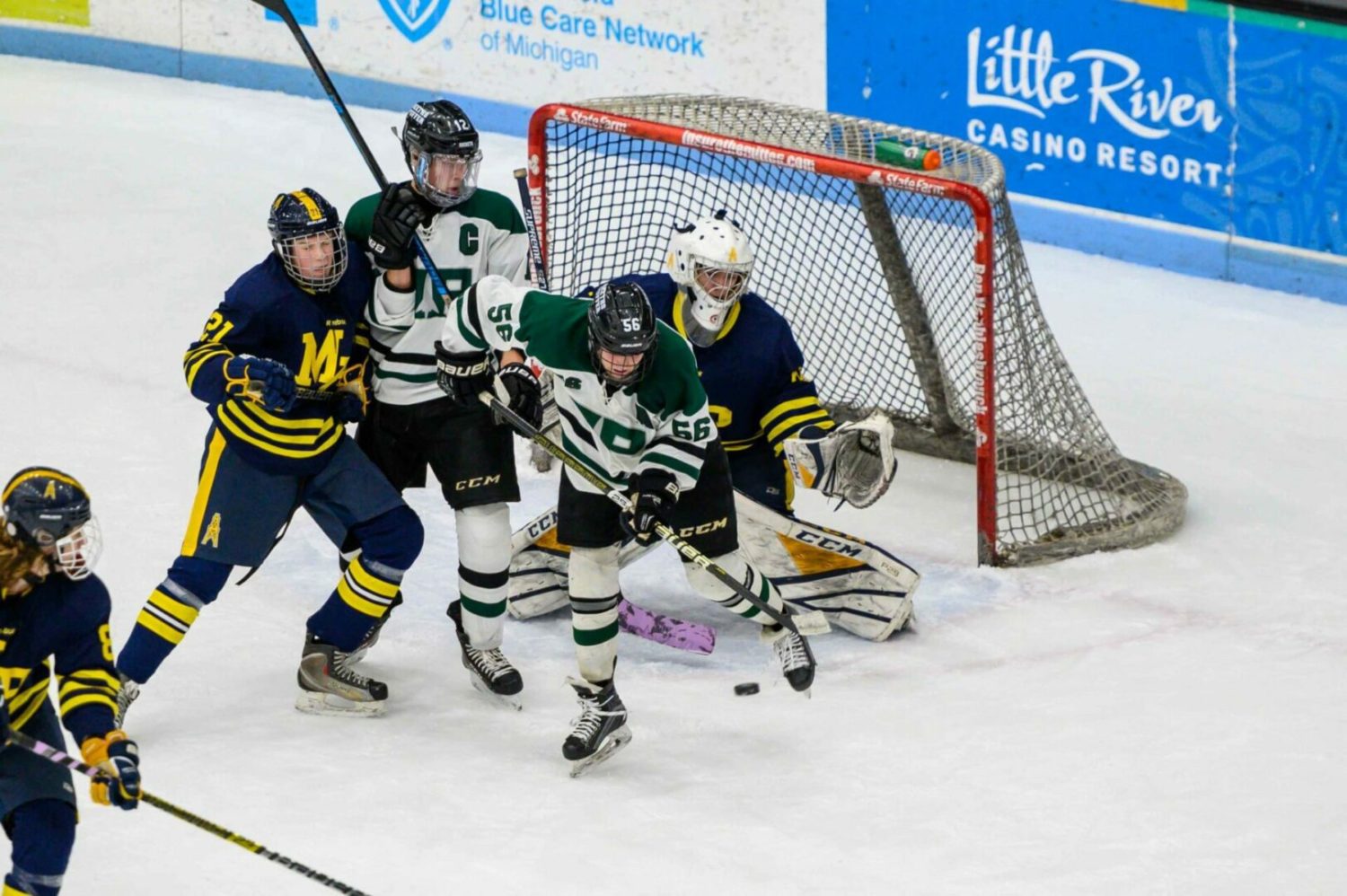 Matt Herniman looks for the deflection on a shot from the point. Photo/Eric Sturr

But that lead didn’t last long.

Mount Pleasant forward Andrew Hovey’s speed proved to be a problem for the Rocket defense. He scored a breakaway goal with 2:27 left in the first period, then cashed in again with another unassisted goal with 44 seconds left in the period, tying the game 2-2.

So it didn’t hurt the Rockets when Hovey was ejected with a game misconduct at the end of the first period.

R-P forward Navarre Klint scored 2:04 into the second period off a feed from Matt Herniman, giving his team a 3-2 advantage. Then defenseman Andrew Bouwman beat the Oilers goaltender off an assist from Fowler, stretching the Reeths-Puffer lead to 4-2 with 8:19 left in the period.

Just over a minute later, defenseman Dylan Stawski connected with Brainard to set up a goal with 6:58 remaining, giving his team a 5-2 lead heading into the final stanza.

The Rockets dominated the shot column, outpacing Mount Pleasant 19-5 in the second period.

Klint scored again with 10:51 remaining in the game. The Rockets outshot the Oilers 19-5 in the final stanza.

Rockets goaltender Brad Egeler recorded the win, stopping 13 of 15 shots. Reeths-Puffer successfully killed off all six Mount Pleasant power plays, and cashed in on one of four of its power-play opportunities.

“We have to learn how to come out and compete these next couple of weeks and into the playoffs,” Coach Zalba said. “We’ve got a lot to clean up next week. We need to set the tone, not just kind of hang out. We need to be a lot better going forward.”