FRUITPORT – First the Fruitport volleyball team endured an uncertain offseason, with the players practicing outside and wondering if they

would be playing this fall. 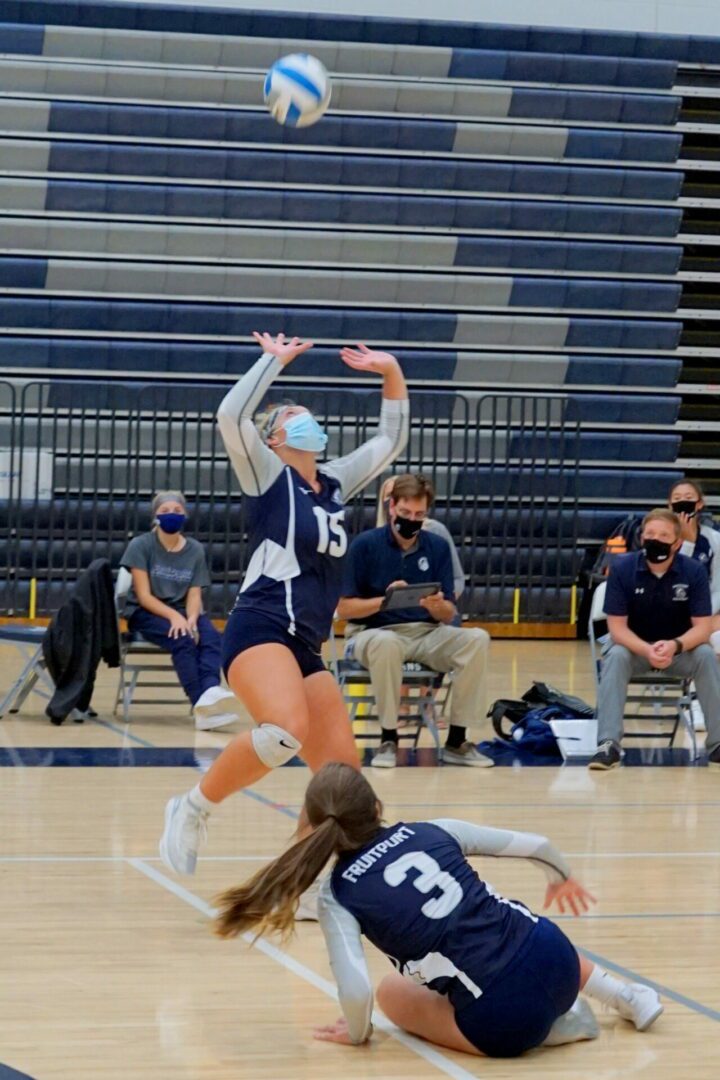 Now the Trojans have to adjust to the challenging new world of the O-K Blue Conference.

The Trojans, a perennial power in the O-K Black, were switched to the Blue in the offseason, which means they will be facing some powerful opponents on a regular basis.

They were rudely welcomed on Thursday night with a disappointing five-set loss to Grand Rapids West Catholic. Fruitport led 2-1, then dropped the last two sets and the match. The Trojans were one point away from securing the victory in the fourth set, but couldn’t put the win in the books.

“This new conference we are in is a beast for volleyball,” said Fruitport Coach Nicole Bayle, whose team is now 1-3 overall and 0-1 in the conference. “When the rankings come out, teams like Hamilton, Coopersville and Holland Christian are going to be highly ranked. We welcome the challenge, and will raise our level of play throughout the season.”

Fruitport will have some early growing pains, with only a couple of players on the roster who saw significant playing time last year. The Trojans also have the challenge of shaking off some rust, after missing several early matches due to the COVID-19 ban that was lifted last week.

“This has been the product of not being indoors and training,” Bayle said. “We missed all of our summer, and I said to our kids that right now is like our second day of summer camp. We are working on how to work together and communicate.”

The Trojans looked great in the opening set, despite trailing 5-2 and 10-8 early on. They went on a 12-7 run to take a 20-17 advantage, before closing the set by scoring five of the last nine points.

Grand Rapids West Catholic responded in the second set, jumping out to a 13-5 advantage. The Trojans cut the deficit to 13-7 before the Falcons closed the set with a 12-4 run. 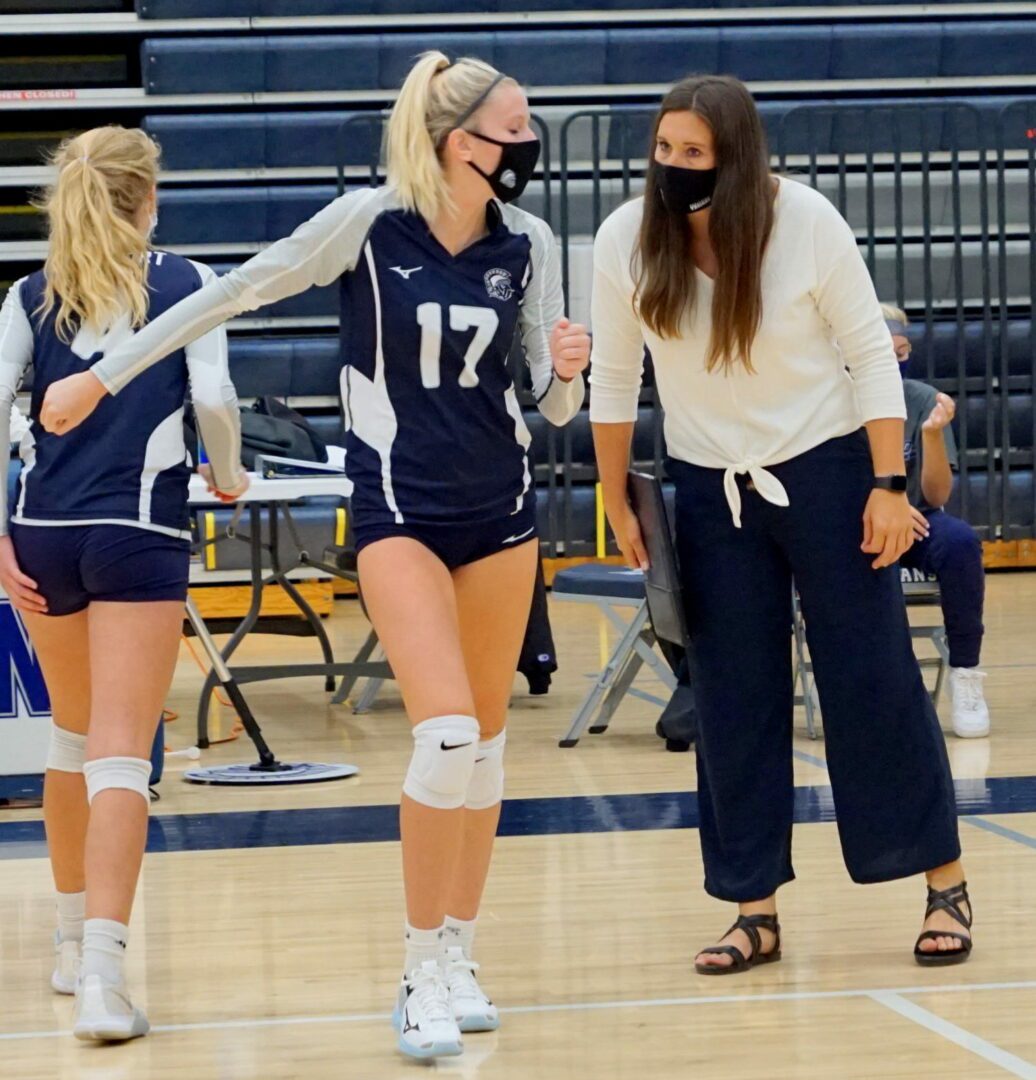 Fruitport bounced back during the third set after trailing 5-2 early on. The Trojans led 17-10 after going on a 15-5 tear, with strong service runs by seniors Autumn Sharlow and Brooke Sieplinga. The Falcons closed to within four points, 24-20, before Fruitport sealed up the win.

The Trojans tried to put the match away in a tightly contested fourth set. After trailing 8-4 early on, Fruitport scored six straight points to take a 10-8 lead on a strong service run by senior Jenna VanderVelde.

The Trojans had a 24-22 lead late in the set, and were within a point of clinching the match, but West Catholic scored the final six points to win 26-24.

Fruitport led 6-5 and 7-6 during the fifth and deciding set, but lost nine of the last 13 points as the match slipped away.

The Trojans were led offensively by Sydney Woods with 14 kills, Sharlow with six aces and VanderVelde with 35 assists. 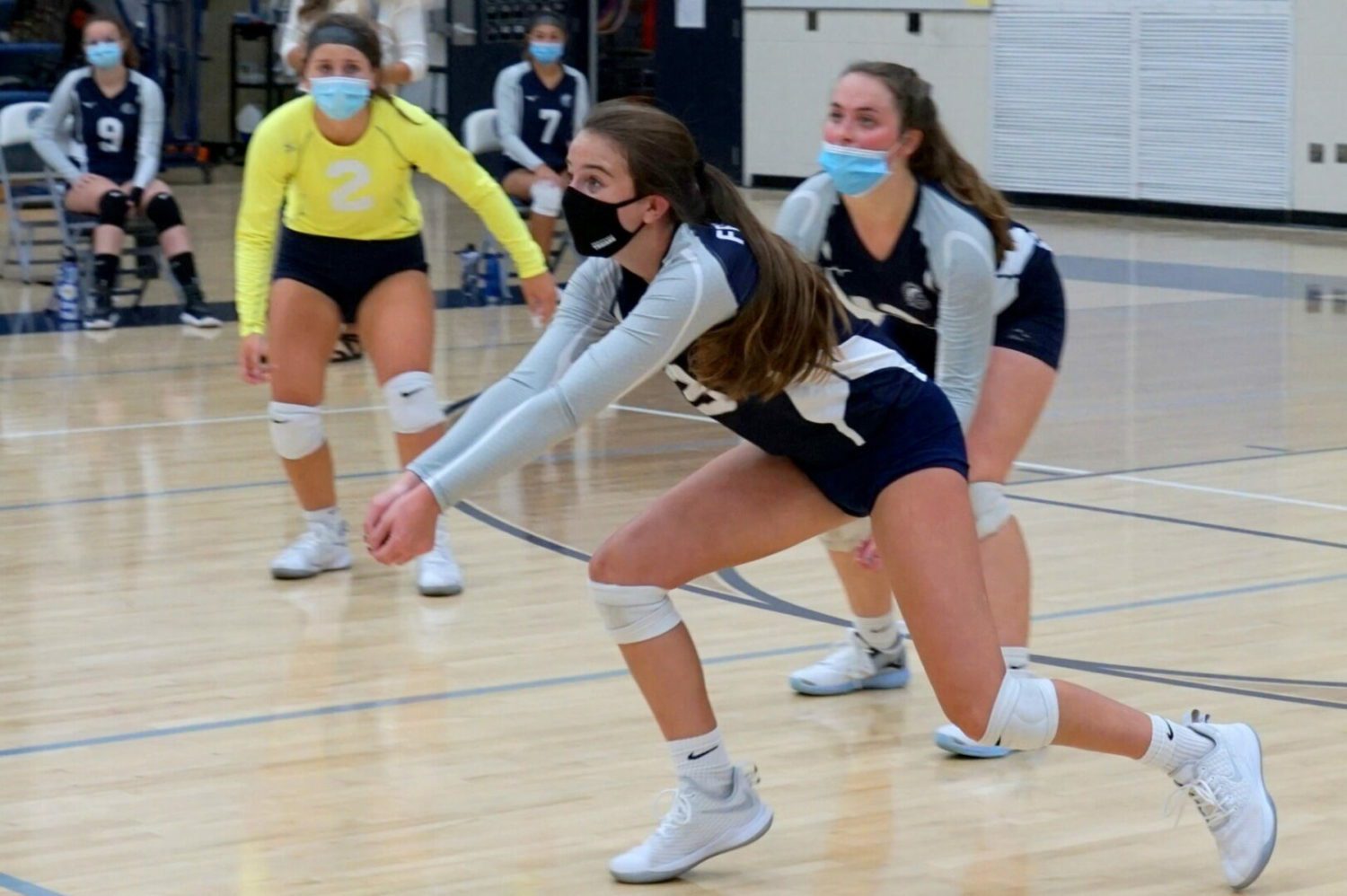 Brooke Sieplinga gets ready to make a dig for Fruitport. Photo/Leo Valdez 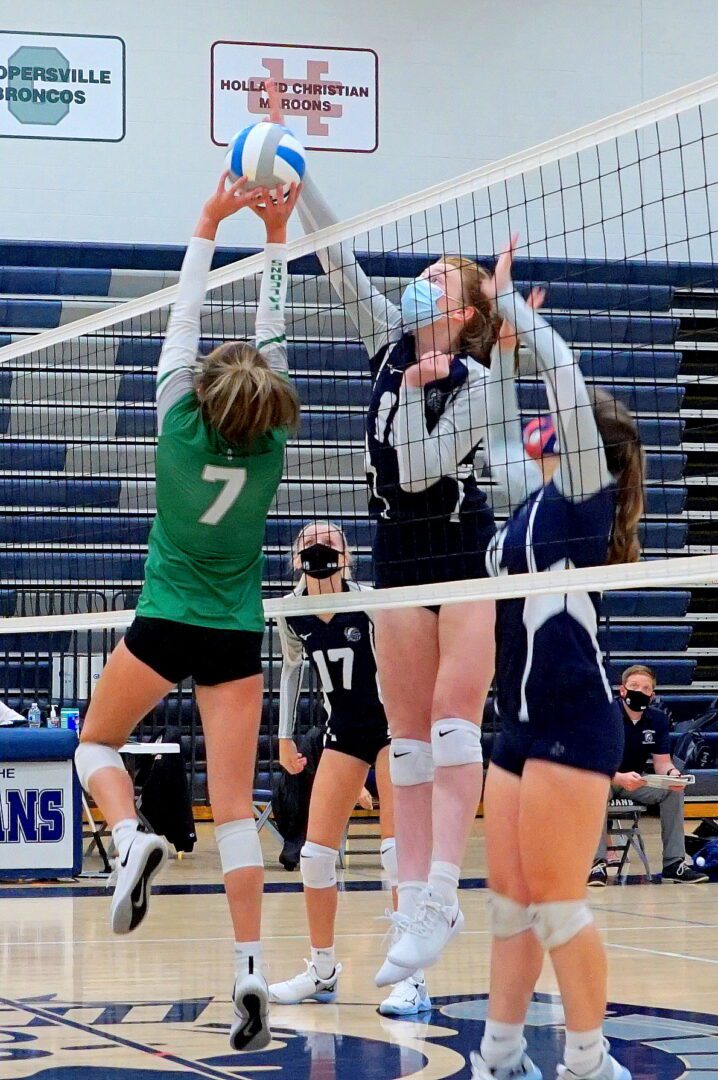 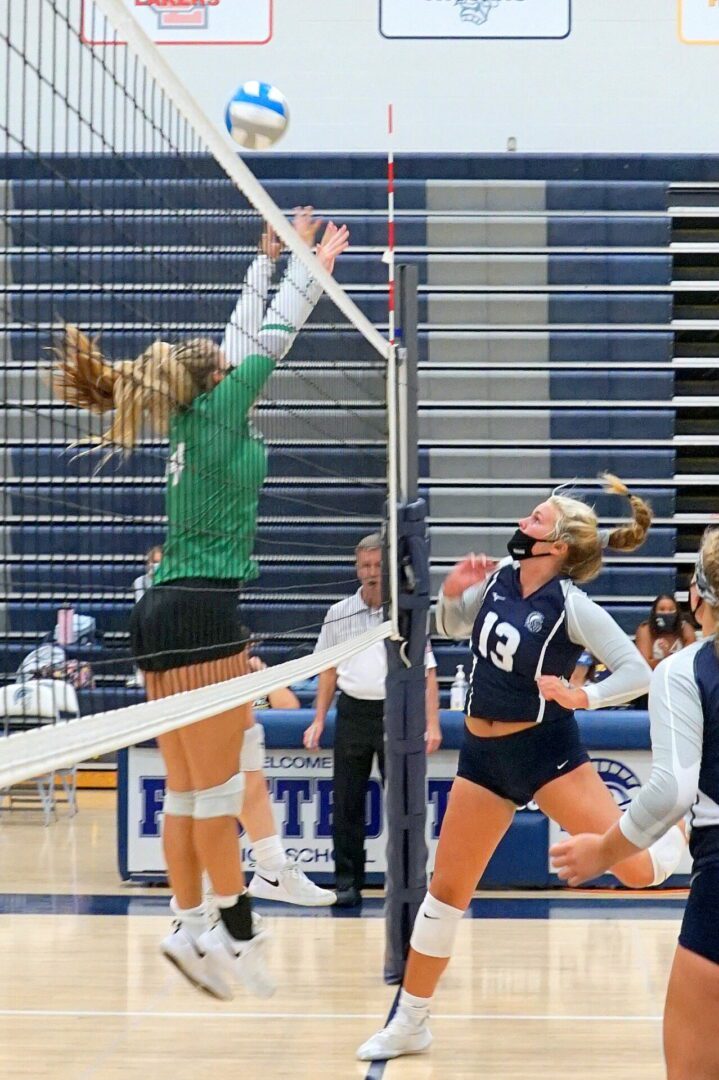 Brooke Sieplinga lofts a shot over the net for Fruitport. Photo/Leo Valdez 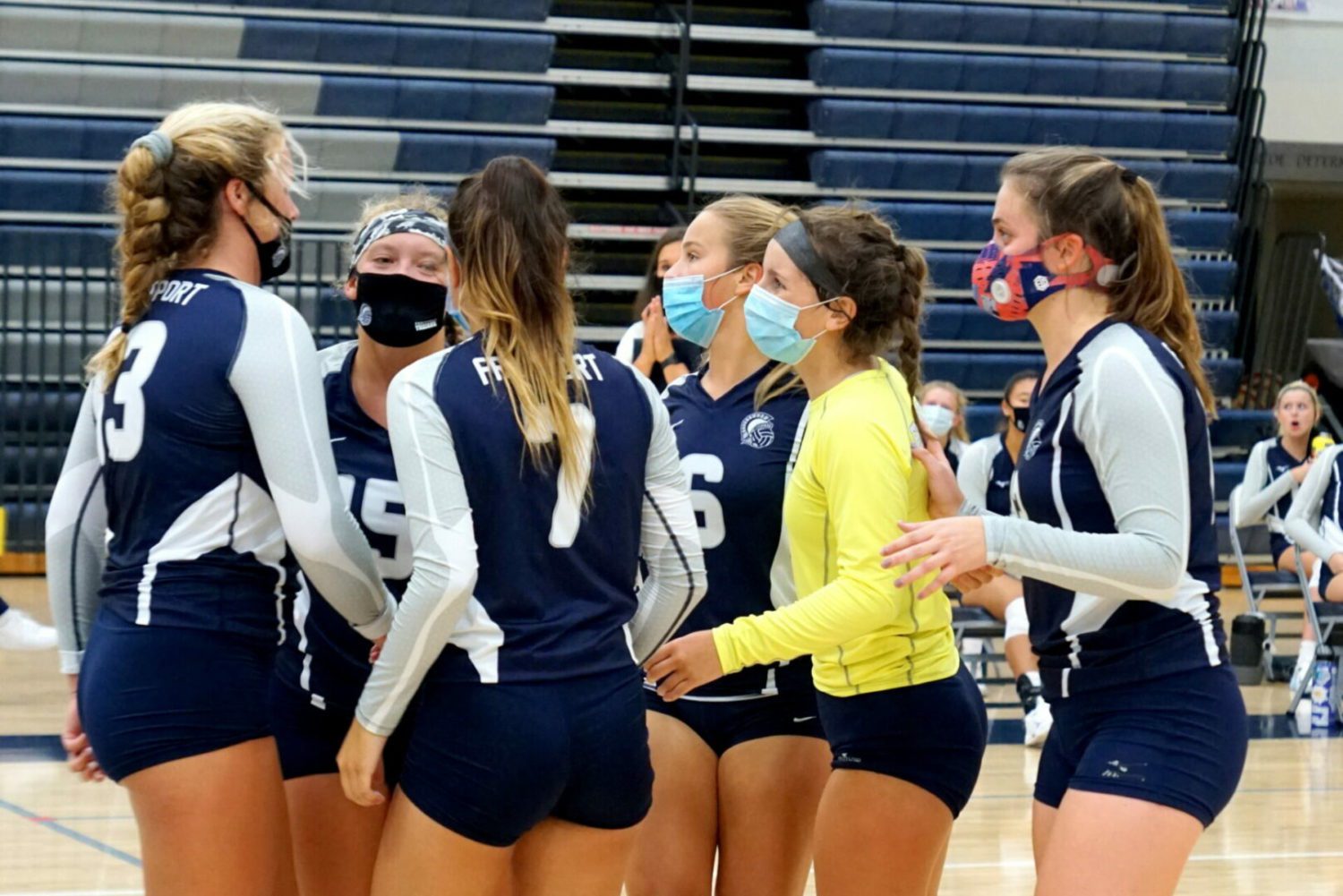