Otherwise, Caledonia might have prevailed with its preferred ground-and-pound, slow-it-down offensive attack. 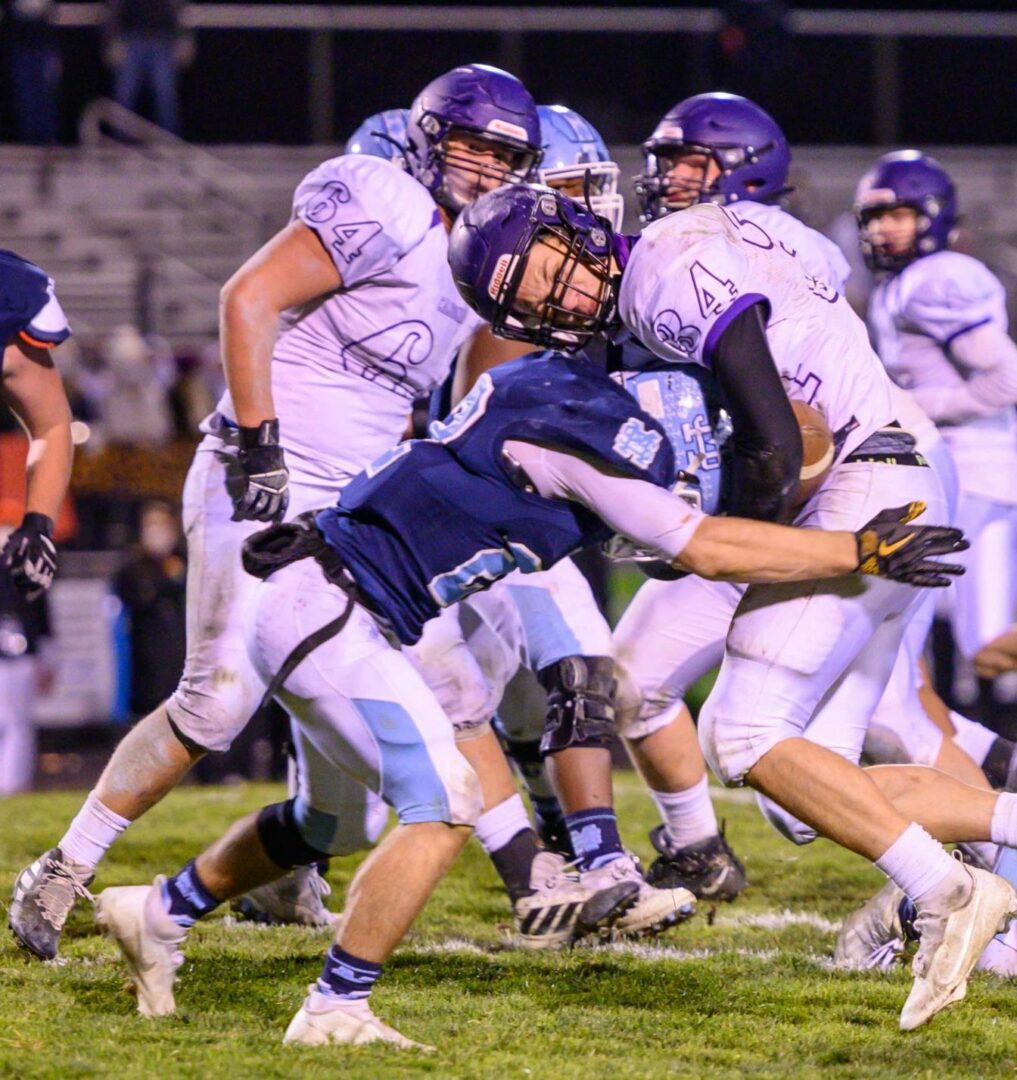 But on a clean, dry turf – which is not always a sure thing in November – Mona Shores’ high-powered veer offense produced just enough at crunch time, giving the Sailors’ their second-straight nail-biting playoff victory, 43-35.

The Sailors improved their flawless season record to 9-0 and advanced to next week’s regional showdown against East Lansing, which is also unbeaten.

Mona Shores head coach Matt Koziak gushed about the performance of Caledonia running back Carson VanderHoff, who carried the ball an astounding 43 times for 230 yards.

His 44-yard touchdown run tied the game at 35-35 with 6:01 remaining in the fourth quarter, but unfortunately for the Fighting Scots, the score happened too quickly.

The Sailors, which had three touchdown drives of three plays or less in the first half, got the ball back with plenty of time to score, and took full advantage.

The Mona Shores offense used seven plays, and took five minutes off the clock, before senior quarterback Brady Rose made a great fake to lead back Elijah Johnson, pulled the ball to his side, broke a tackle in the open field and scooted 13 yards for what turned out to be the winning touchdown.

Rose was the holder on the extra point attempt, and turned what could have been a dangerous error into a big plus.

He bobbled the snap, but made a quick decision to pick up the ball and sprint to the right corner of the end zone. He beat the defense to the pylon to put Mona Shores up 43-35.

“Brady’s just a playmaker for this team,” Johnson said. “He’ll do anything to get it in the end zone. He’s a good leader that this team needs.” 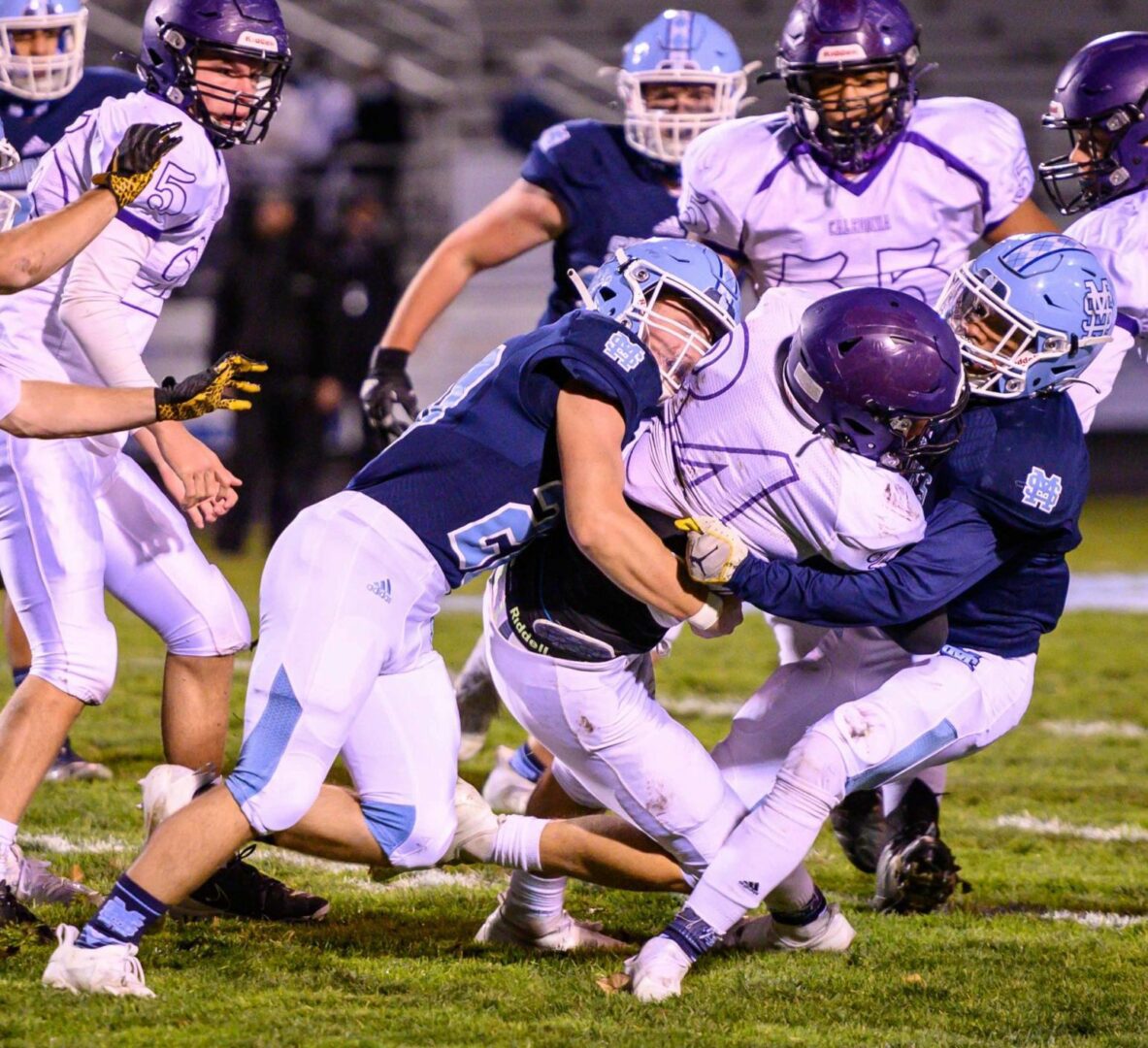 Caledonia had 1:20 left on the clock for a last-gasp drive, but on the opening play, quarterback Mason McKenzie threw a wild pass across the middle that was picked off by Mona Shores’ senior Gary Humphrey.

For Humphrey, the pick made amends for two drops at his receiver position in the first half.

“He was beating himself up about those drops, but the kids came up to him and told him, ‘You got this,’” Koziak said. “He came through, just like this senior class has done so many times.”

Caledonia managed to force a Mona Shores’ punt with five seconds left, but the Fighting Scots’ could manage just a short two-yard pass on their final play, and an attempted backward lateral didn’t produce any last-second craziness.

Koziak said the best method for slowing Caledonia was keeping its offense on the sidelines, and the Sailors did that early in the game.

Mona Shores forced a fumble and a stop on fourth down on the Fighting Scots’ first two drives of the contest, and the Sailors’ offense was amazingly efficient.

They scored on a 24-yard sweep by Dahmir Farnum on their first play from scrimmage, then Rose scored on a 70-yard sprint on their second play, giving Mona Shores a 14-0 lead after one quarter.

But then VanderHoff and Caledonia began to control the clock with their power run game. They scored on a touchdown run by Brock Townsend to open the second quarter, making the score 14-7.

Mona Shores’ Elijah Johnson had a 35-yard TD run about a minute later, and the Sailors led 21-7. 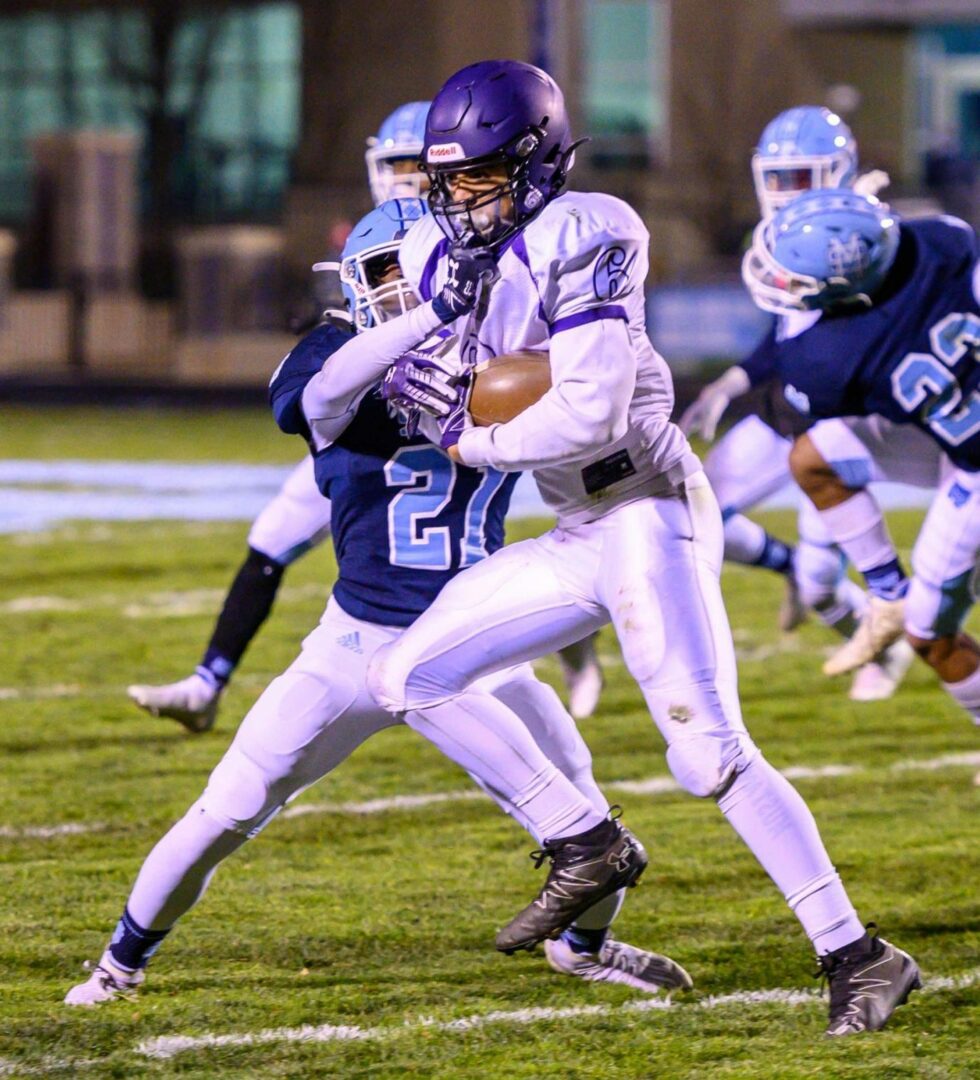 Caledonia got another score with 3:35 left in the half on a 1-yard plunge from VanderHoff, making it a 21-13 game.

On Mona Shores’ next play from scrimmage, a pass to Farnum that appeared to be incomplete was instead ruled a fumble, and Caledonia took advantage.

The Fighting Scots’ two-point conversion was also good, tying the game at 21-21 at halftime. Caledonia ran 42 offensive plays in the first half, while Mona Shores had only 10.

“That’s what they do to every team,” Koziak said about Caledonia.

But Mona Shores’ offense didn’t slow down in the second half, either. The Sailors marched down the field to open the third quarter, with Johnson scoring on a one-yard run to re-take the lead.

Caledonia capped a long drive with another game-tying touchdown early in the fourth quarter on a well-executed wide receiver screen to Nicholas Fox, who maneuvered through traffic to score from nine yards out.

The Sailors took the lead again with under nine minutes left when Farnum showcased his great speed again on a 62-yard swing pass from Rose.

“These kids just don’t quit,” said Koziak. “Again, we found a way to make some plays at crunch time. We know, when we get into another tight situation like this, and I’m sure there will be another one, it won’t be new to us. We know how to win in these tight games.”

Rose had another tremendous all-around game, completing 5 of 9 passes for 121 yards and also rushed 14 times for 125 yards.