HOLTON – The Holton Red Devils are red hot this season, and so is their star player Aidan Poling.

The Devils squared off against CSAA Silver Division rival Kent City on Friday, and Poling was at his best the double-overtime thriller. 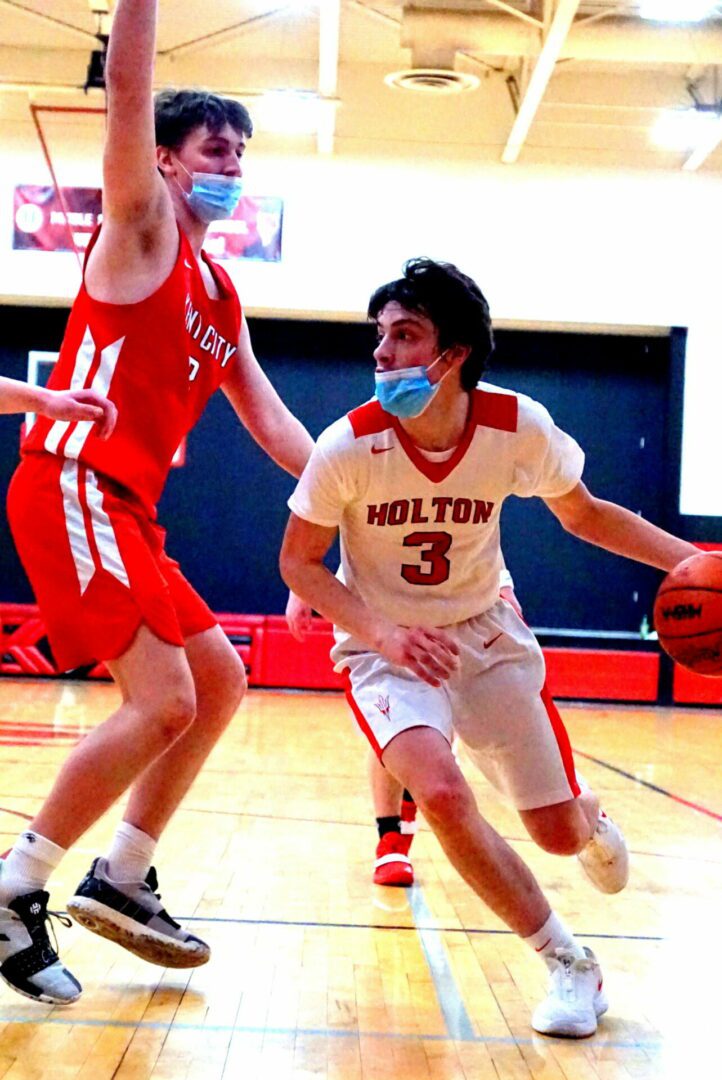 Poling notched 23 points, including six in overtime, to lead Holton to a 44-40 victory over the Eagles in a key CSAA Silver Division game.

Freshman Carter Brant also got into the late-game heroics, making two clutch steals in the second OT to help Holton secure the win.

The Red Devils improved to 10-2 overall and lead the Silver Division with a 7-0 mark. Kent City fell to 5-5 overall and 4-3 in the conference.

“Aidan hit a ton of clutch shots down the stretch,” said Holton Coach Keith Swanson. “I’m so proud of all our players. They have so much fight in them, it’s incredible to watch time after time. I’m very lucky to have them, just an amazing group.”

The game started off slow, with both teams playing well defensively.

Kent City had a 6-5 lead with two minutes to go in the first quarter before Poling put back an offensive rebound for his first points of the game. On the next possession, he got a steal and drove down the court, drawing a shooting foul and hitting both free throws to put Holton up 9-6 at the end of the first. 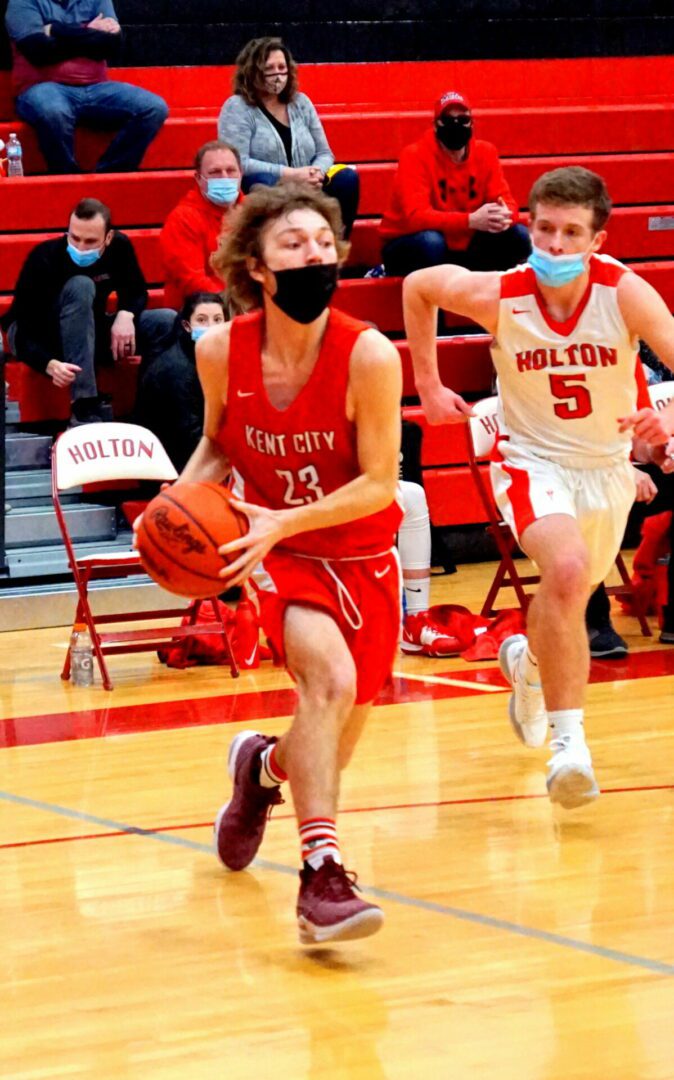 The second quarter kicked off with a Kent City technical foul and Poling sinking both free throws. Later in the quarter, Poling nailed back-to-back three pointers to give Holton a 17-10 lead with just under three minutes to go in the half.

The Red Devils led 19-12 at halftime, with Poling scoring 12 points.

Holton’s offense sputtered in the third quarter, when Kent City held the Red Devils to two points. Luckily for Holton, Kent City was pretty cold, as well, and didn’t take advantage of the opportunity.

Back-to-back three pointers from Jaret Jaramillo and Webb Longcore brought the Eagles within one point of Holton with under two minutes to go. Both teams went scoreless for the rest of the quarter, and Holton led 21-20 heading into the fourth.

“They took away our inside stuff, and we went cold from the outside, and turnovers also let them back into the game,” Swanson said about the quiet third quarter.

Holton took the momentum back to start the fourth. Wyatt Monette hit two free throws, then under a minute later Poling got a steal and a three-pointer to extend the lead to 26-20. After each team traded baskets and a few good defensive stops, Jaramillo hit two free throws, which was immediately followed by a turnover and a three-pointer by Kyler Larson, pulling Kent City within one, 28-27, with less than two minutes to go.

Holton killed nearly a minute of clock before Poling hit another layup. On the other end, Kent City moved the ball around before Hayden Carlson got open and hit a three to tie the game at 30-30 with 28 seconds to go. 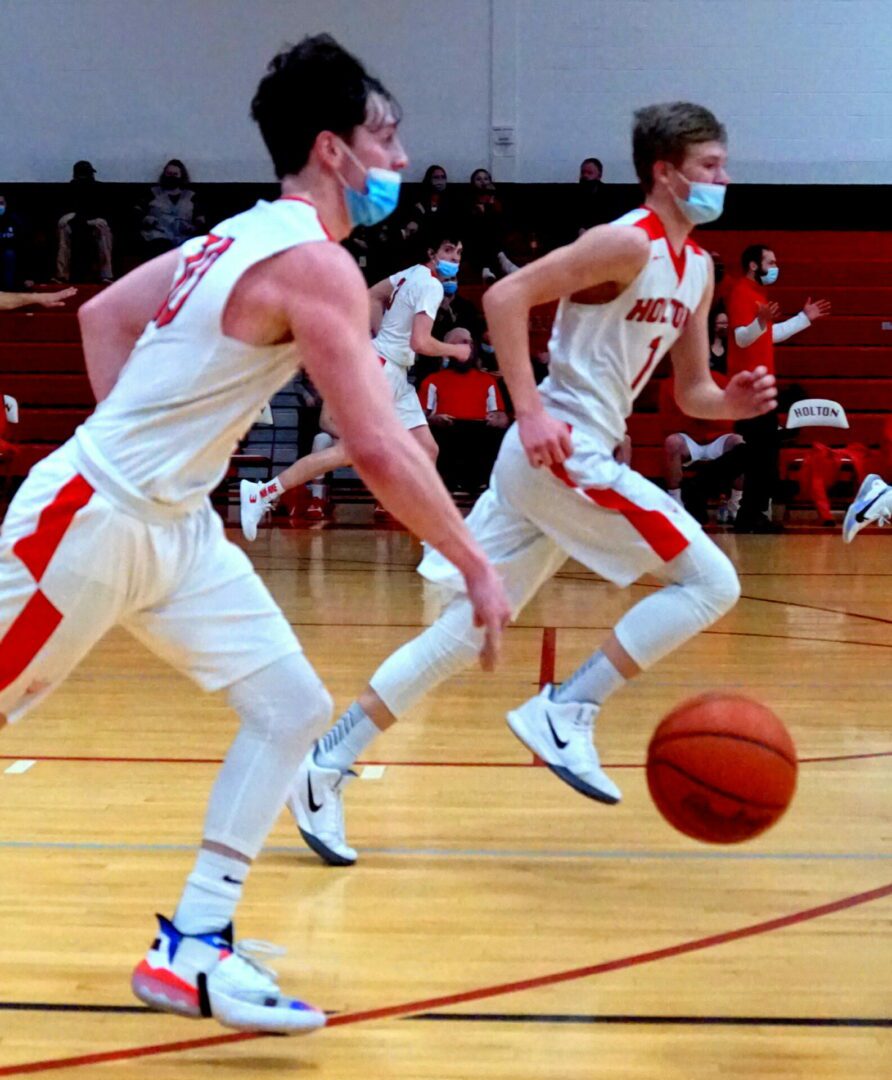 Holton’s Aidan Poling dribbles up court with No. 1 Kevin Erickson at his side. Photo/Leo Valdez

Poling dribbled out the clock on the final possession, and as three Kent City defenders waited for him to drive, he kicked it to Carter Brant, whose potential game-winning triple attempt missed the mark with one second to go.

That took the game to overtime.

Holton held possession for a full minute before a travel ended the possession. Larson scored the first points in overtime, then Poling nailed a deep three with about 90 seconds left to give Holton a 33-32 lead.

Larson answered with a three of his own to give Kent City a 35-33 lead. With 10 seconds to go, Holton’s Broderick Fialek was fouled and hit two clutch free throws to tie the game once again.

Jaramillo’s attempted game winning three was off the mark, and the game went to double overtime.

Kent City led 38-37 with two minutes left in the second OT when Brant got a steal and passed to Poling, who nailed a triple to put Holton up 40-38. Longcore had a putback to tie the game for the Eagles on the next possession, but Fialek scored very quickly for the Red Devils to give them a 42-40 lead with under a minute to go. 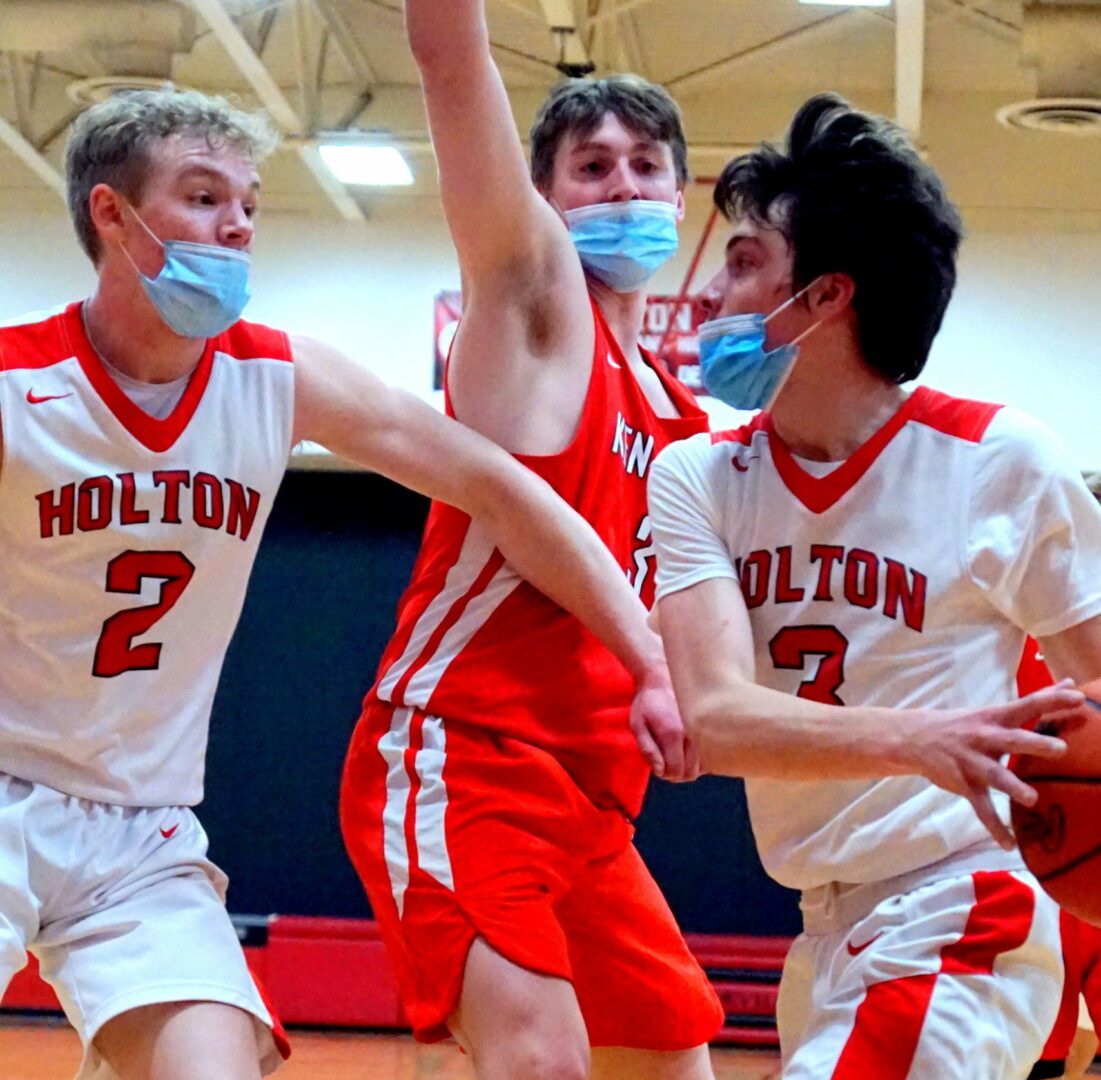 After that basket, Kent City was setting up their play when Brant stole a cross-court pass and sank a clutch layup with 16 seconds left to give Holton its final margin of victory.

“Carter kept reading the back side so well, and it paid off perfectly at the end.” Swanson said about Brant. “For him, as a freshman, to have the head he does is very telling for the future of this program.”

Poling had four steals for Holton. Fialek had eight points while Monette had six points to go along with 10 rebounds.

Larson had 17 points for Kent City, with Jaramillo and Longcore each contributing eight points. 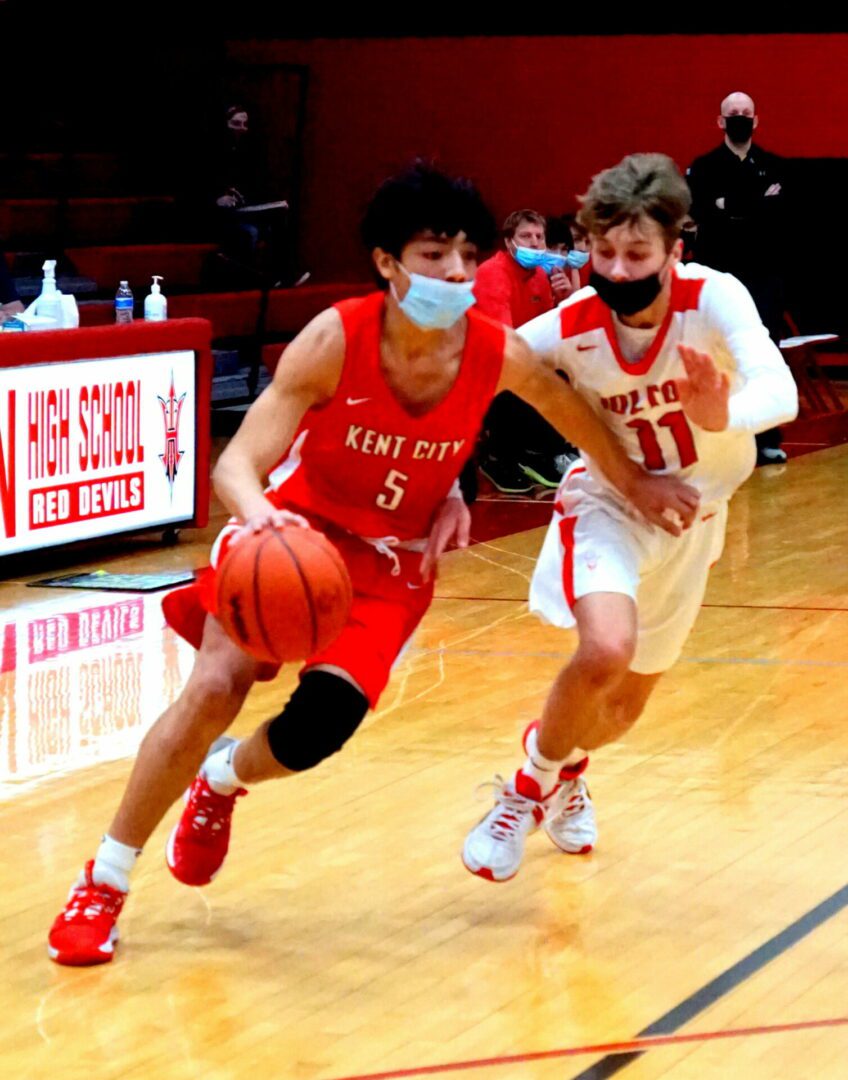 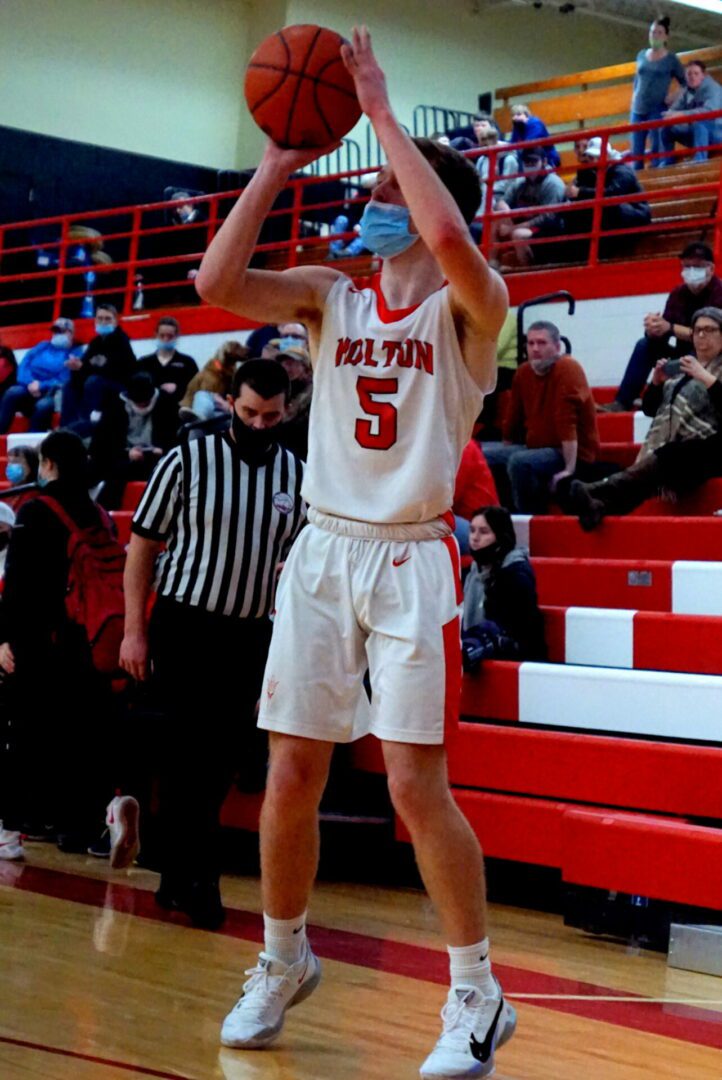 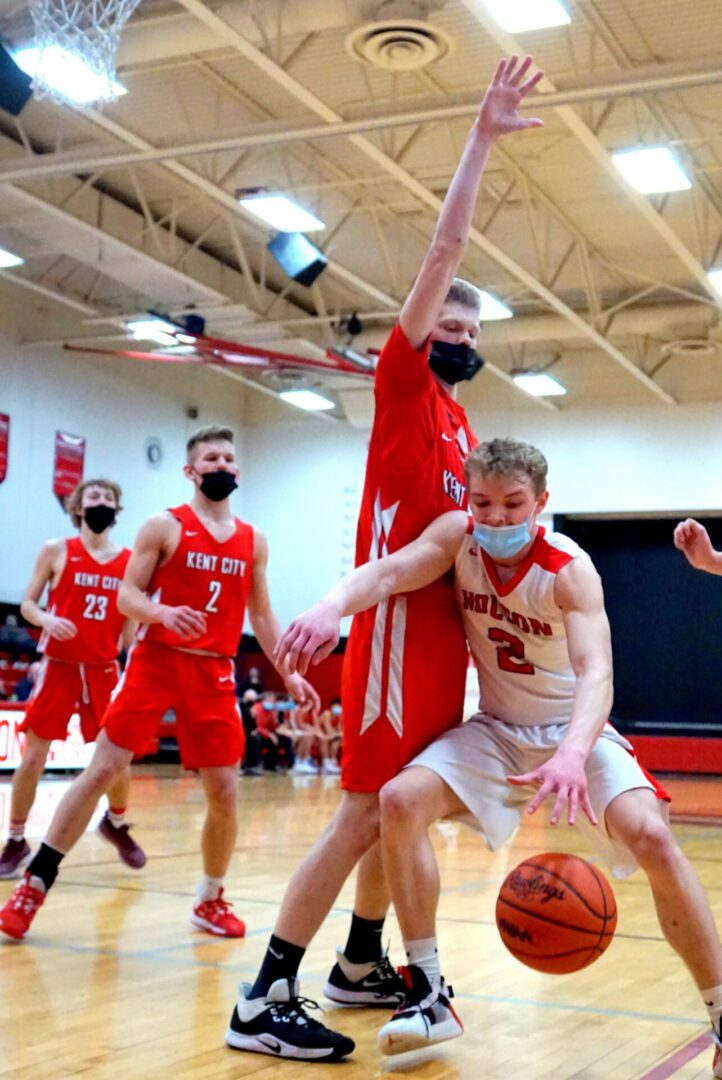 Brodrick Fialek works in the post for Holton. Photo/Leo Valdez 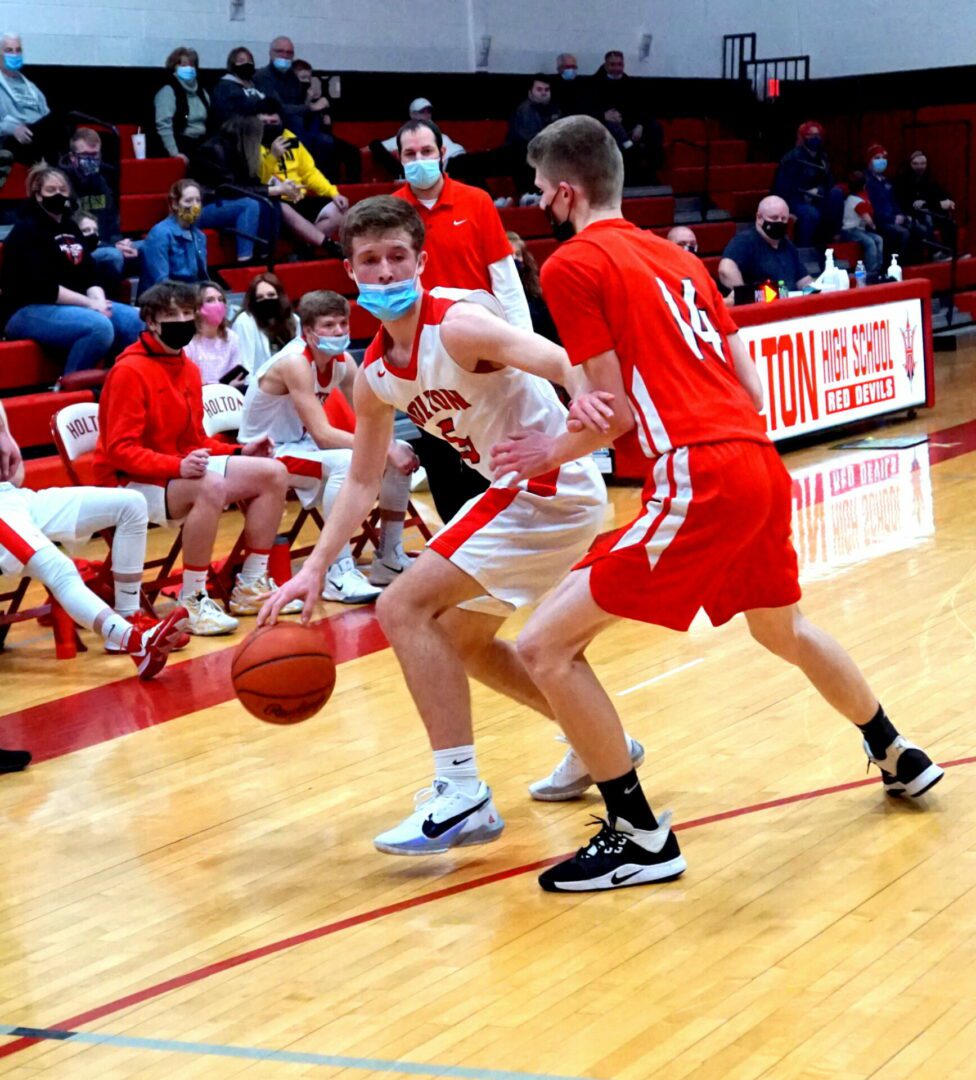 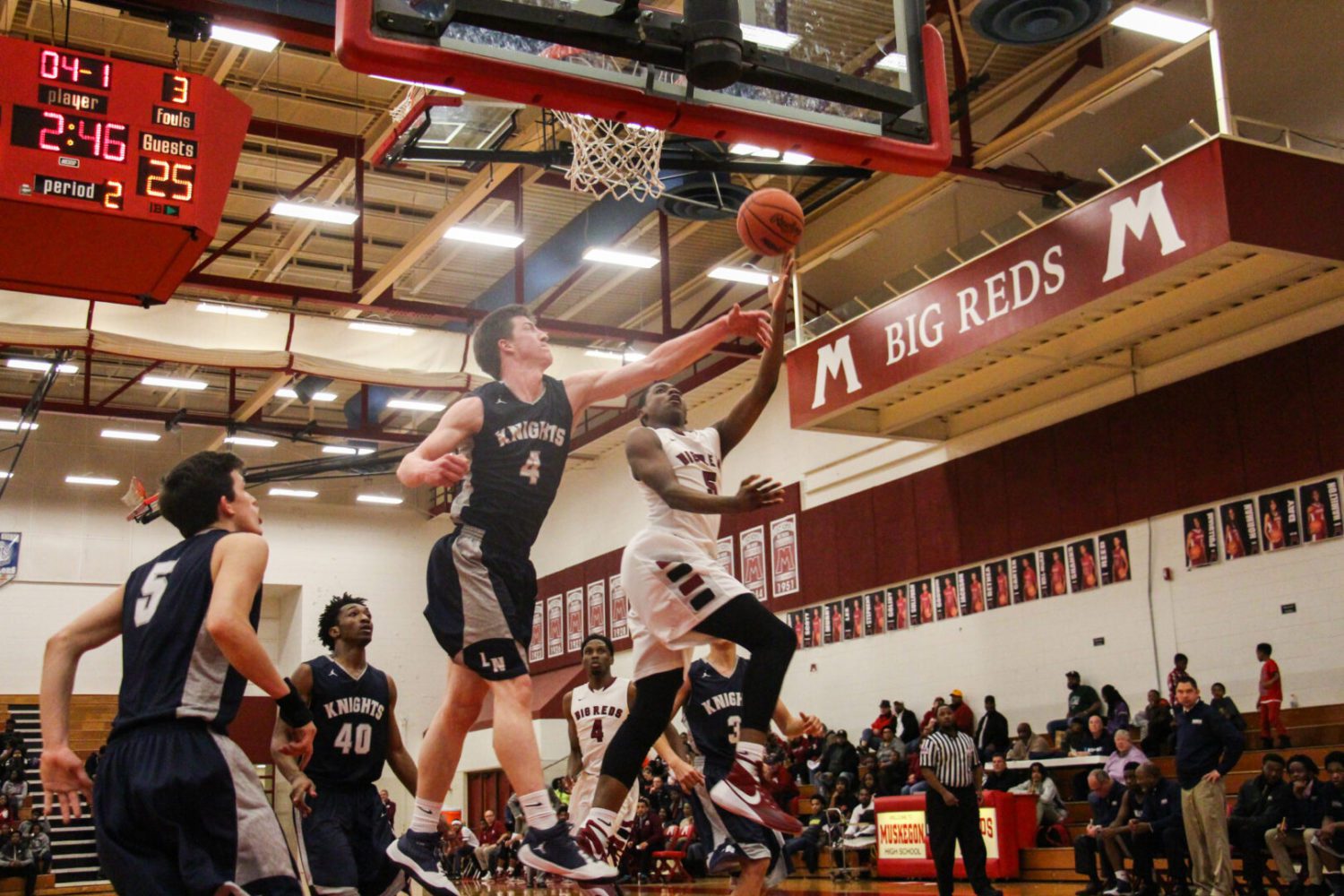