FREMONT – The Fremont High School baseball program received a boost when Payton Mansfield and his family moved to the area from southern Illinois four years ago.

The coaches just didn’t know how big of an addition Mansfield would be until this season. 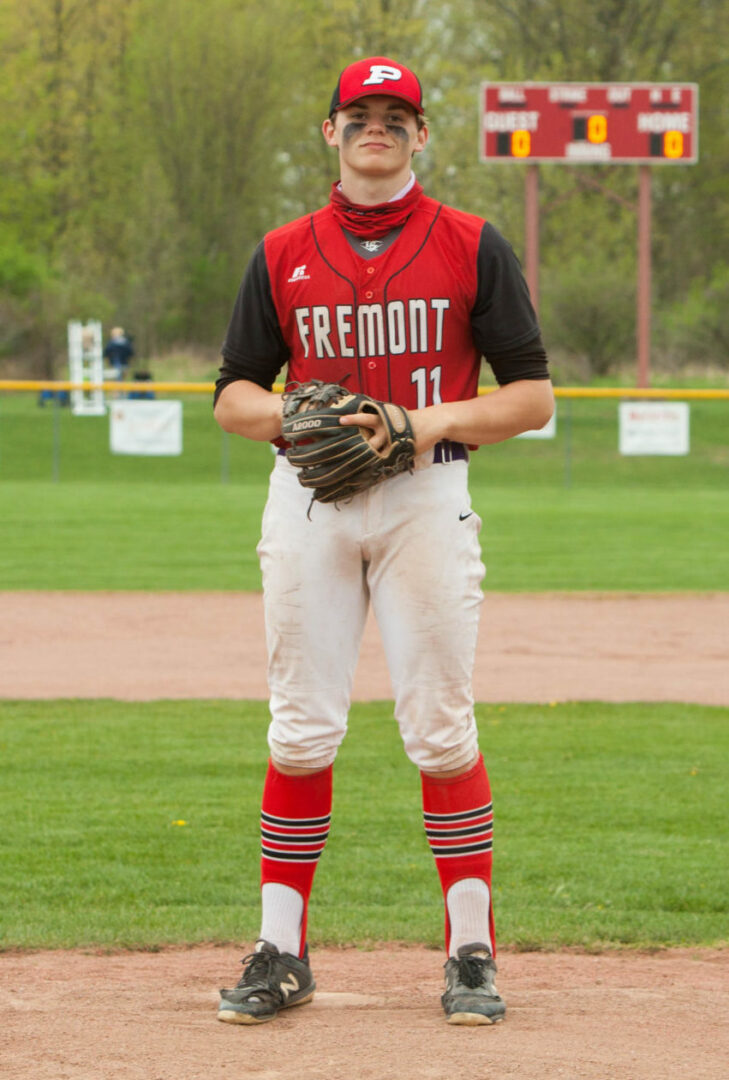 As a sophomore he was on the varsity squad as the starting catcher who could also pitch a little bit. He had a good bat and seemed to be developing on the mound, and Packers Coach Jeff Foster figured he would be a valuable all-around player when the 2020 season rolled around.

Of course 2020 never happened, and this spring when the team regrouped, Foster had a pleasant surprise. Mansfield was far advanced from the player who showed a lot of potential as a sophomore.

He always had a strong bat, but now he may be the area’s most dangerous power hitter. On last week’s LocalSportsJournal.com baseball leader board, he was tops among local hitters with four home runs and 30 RBIs. Nobody else on the leader board had more than one home run. Mansfield’s two nearest competitors in the RBI category – teammate Logan Nelson and Ludington’s Brad Mesyar – both had 14.

Nelson was the only hitter in the area with a higher batting average. He was hitting at a .565 clip while Mansfield was hitting .537

Mansfield also became an overwhelming power pitcher. In the leader board he led area hurlers with an impressive 67 strikeouts and only three walks in 31 innings. He had a 5-0 record with a brilliant 0.97 earned run average.

His closest competitor in the strikeout category was Fruitport’s Cody Matuz with 36.

With a good chunk of the season left, Mansfield has a good shot at breaking four single-season school records – home runs (9), RBIs (49) strikeouts (88) and pitching wins (10).

More importantly, Mansfield’s all-around strong play has helped his team soar this season. The Packers are 14-1-1 overall, and lead the CSAA Gold Division with an 8-0-1 record. They can wrap up the overall conference title with another league victory, even though the regular season still has several weeks to go. 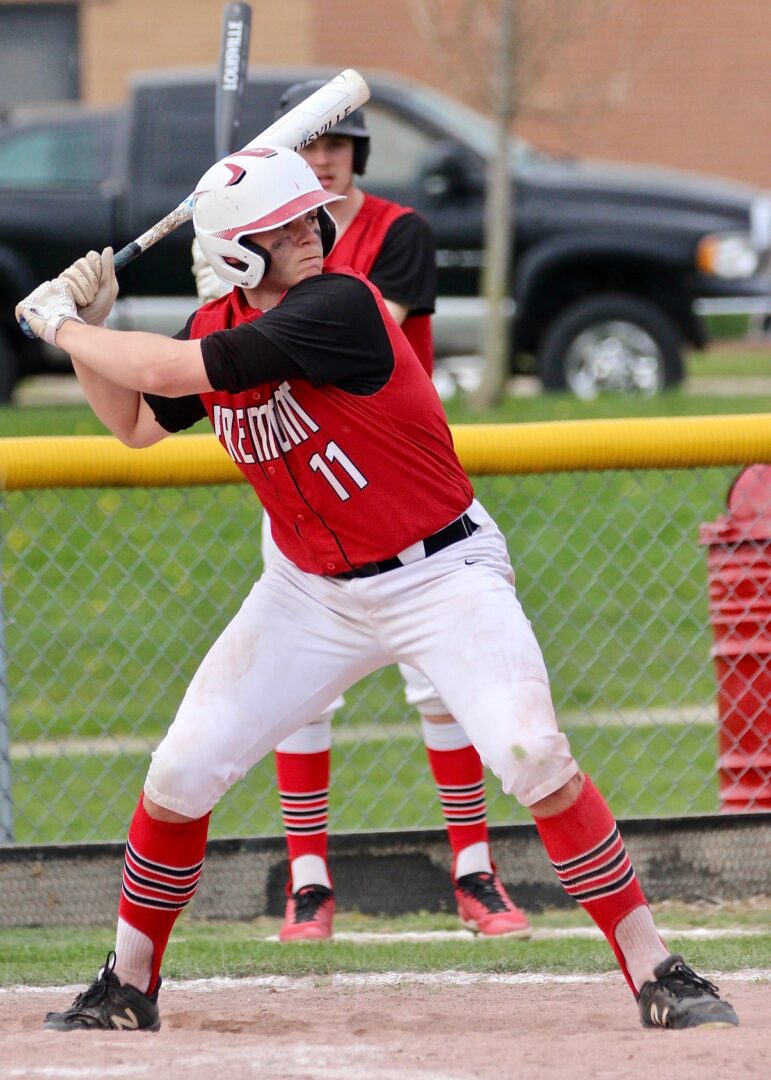 Mansfield gets ready for an incoming pitch.

“I didn’t know we would be this good,” said Fremont Coach Jeff Foster, who is in his eighth  year with the team. “(Mansfield) is definitely the highlight of our team, the structure we build off from.”

Mansfield’s hitting was anticipated this year, but the advanced pitching skills were more of a surprise for Foster and the team.

“We had three senior pitchers coming back, but we didn’t know who was going to be our number one,” Foster said. “After the second time around (in the rotation), we knew he was going to be No. 1. He probably gained about six to eight miles per hour on his fastball since his sophomore year.”

Mansfield said his extra power, at the plate and on the mound, comes from working out in general and lifting weights from his father. Playing football in the fall and wrestling in the winter probably added a lot of strength to his frame, as well.

He also gained valuable experience over the past two summers playing on an elite travel baseball team, before varsity baseball returned this spring.

He says he’s really surprised himself on the mound this season.

”I’m just trying to go out there and hit my spots and pitch for the win,” said Mansfield, who is currently 6-0 on the season, and usually plays third base when he’s not pitching. “I was normally always a catcher, then two summers ago I got a little taller and could pitch a little bit, but in my sophomore year I think I only pitched about five innings.

“I think it has come with more experience. As a sophomore  pitcher I was a little intimidated, but now I have a lot more confidence.” 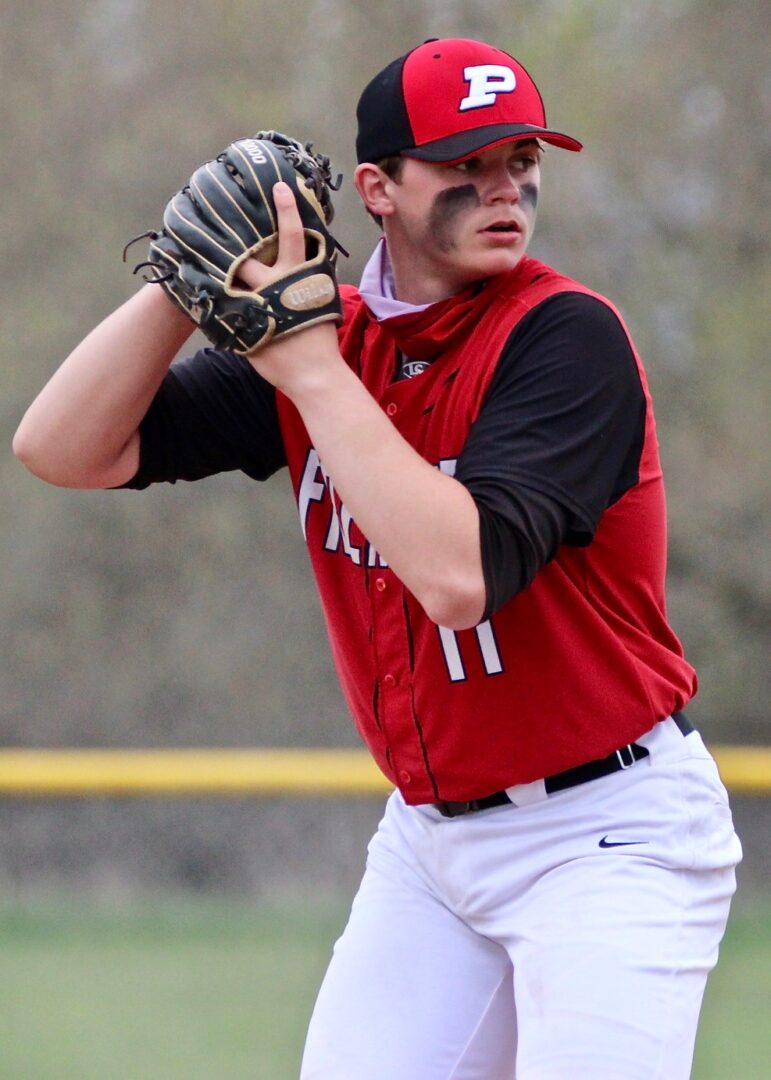 Mansfield gets ready to throw a pitch.

More than anything, the big numbers are probably just the result of sheer determination. Mansfield counts on himself to come through for his team, and when he comes up short, he makes up for it by working even harder.

He disappointed himself in a game earlier this season, then was out on the field early the next morning with a teammate, taking batting practice before classes started for the day.

“It was against Central Montcalm, and I didn’t do well,” said Mansfield, who has drawn six intentional walks from opposing teams this season. “It was the bottom of the sixth or seventh inning, and we had the bases loaded with one out, and I popped out. The next morning me and my friend came out and hit.”

Mansfield said he hit “a lot better” in the next game, and that’s easy to believe, because he’s had a lot of big games this season, at the plate and on the mound.

In a win over Ludington, he had three hits and four RBIs, and pitched the victory with 10 strikeouts.

In a 3-0 victory over Big Rapids, he provided two-thirds of the run production with a two-run homer in the first inning, and pitched a complete-game three-hitter with 15 strikeouts and only one walk.

Last Friday against Tri-County, he pitched a no-hitter while striking out five.

That kind of success leads Foster to believe that Mansfield may become a first-team All-Stater this year, which would make him the first during Foster’s coaching career at Fremont.

“I would really hope we can get him there,” Foster said.

Regardless of how the rest of the baseball season works out, Mansfield knows where he will be when the 2021-22 academic year rolls around – playing both baseball and football at Albion College.

That will probably not surprise some Fremont football fans, because Mansfield displayed his talents as a first-year quarterback last fall. In his most memorable game, he rushed for 147 yards, passed for 266 yards and scored five touchdowns, including two in the fourth quarter, to nail down an exciting 42-26 victory over Chippewa Hills, which ended Fremont’s painful 17-game losing streak that dated back to Sept. 14, 2018. 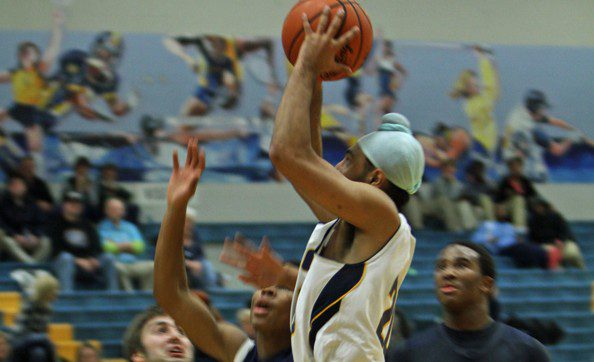