The Montague Wildcats and Lansing Catholic Central are both on a mission.

The Wildcats are looking to repeat as the Division 6 state football champions. Lansing Catholic was eliminated in the semifinals a year ago and is looking to take their season one step further this time around.

The Wildcats and Cougars will battle at 1 p.m. Saturday in hopes of extending their season at least another week.

The Cougars got a bit of a scare from Millington in the district final, but the Cougars reeled off the final 21 points to win, 28-8.

“Offensively, they are very talented,” said Montague coach Jason Dennett. “The quarterback has only thrown two interceptions all year and their receiver leads the state in yards.

“Defensively, they have decent size and are athletic.”

Cougars senior quarterback Joey Baker was 13-of-23 passing for 89 yards and one touchdown. The one touchdown was a completion to senior Alex Watters, who had nine receptions for 76 yards. Senior receiver Owen Biergans had three catches for 43 yards.

Lansing Catholic rushed for 184 yards on 22 carries, with junior Nic Gruber leading the way with 82 yards on five attempts with a touchdown, while junior Brandon Lewis added 68 yards on eight carries and Baker had 33 yards on six attempts and scored two touchdowns on the ground.

Montague turned back a strong Reed City team, 35-22, in its Division 6 district final against Reed City. It was a tight close until senor running back Dylan Everett ran the ball eight straight times, including the final 23 yards for the clinching touchdown on fourth down. 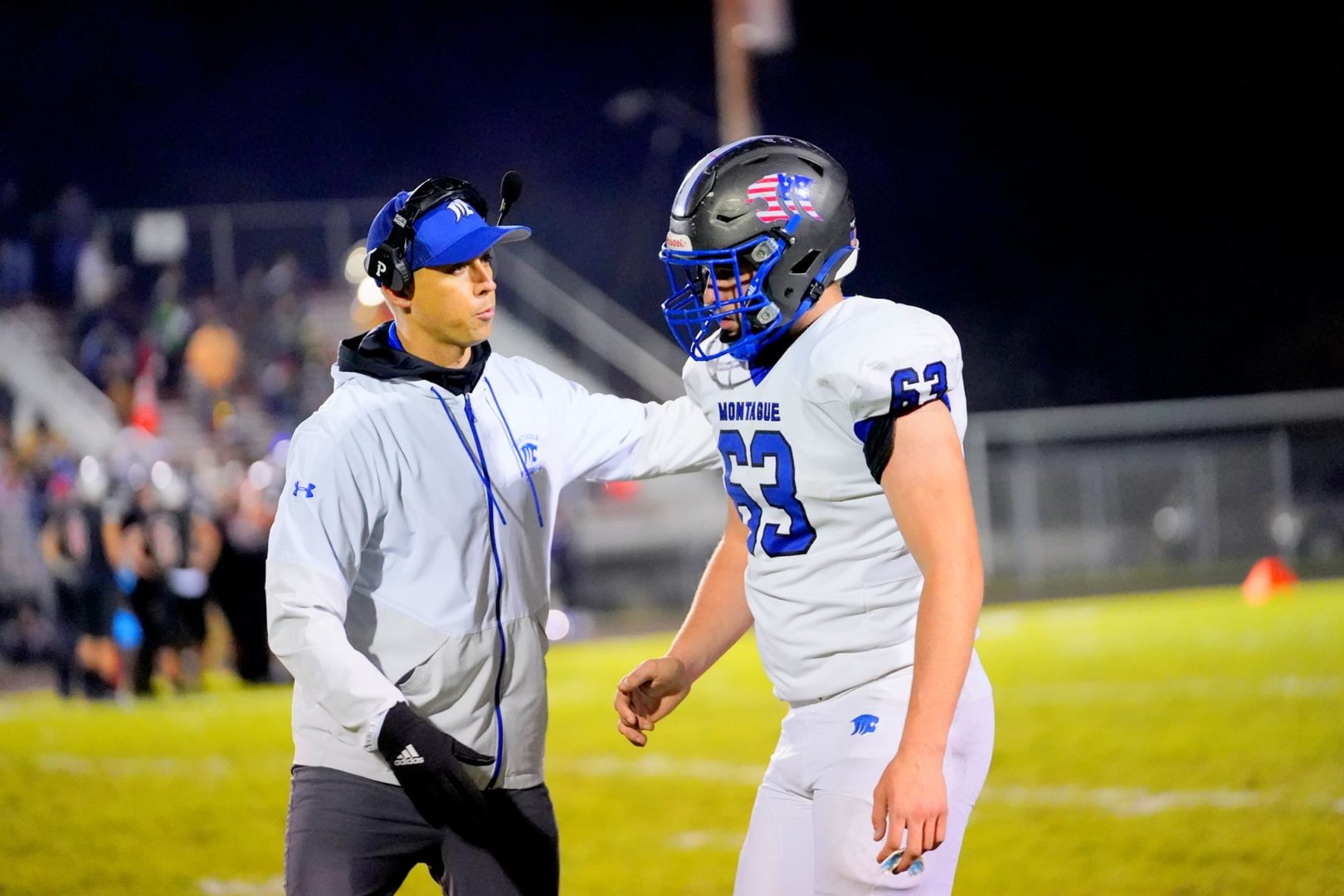 “Our guys have been pretty focused this year and not worried about defending the state championship. Our focus is winning this game and they understnd the importance of it.” (Montague head coach Justin Dennett). Photo/Leo Valdez

“They are a completely different team than Reed City, so our preparation will change,” Dennett said. “Reed City was wing ‘T’ and 90 percent run.

“Lansing Catholic is unbalanced spread and throws the ball all over the field. We feel like we match up well with them, but it is a very different style than we normally see.”

What will be the keys to stopping Lansing Catholic?

“The biggest key will be containing their stars on offense,” Dennett said. “They are dangerous playmakers, so we need to keep them in check in order to win.

“We also need to create some turnovers. They typically take care of the ball, so we need to find a way to force a turnover. Last, we need to get our running game going on offense. We have been running the ball well lately and need to continue that in order to get the win.”

Dennett added that he expects special teams to play a big role again.

“They have a great kicker,” Dennett said. “And a unique punter that we need to be prepared for.”

He isn’t worried about the Wildcats being ready for the game.

“Our guys have been pretty focused this year and not worried about defending the state championship,” said Dennett. “Our focus is winning this game and they understand the importance of it.”