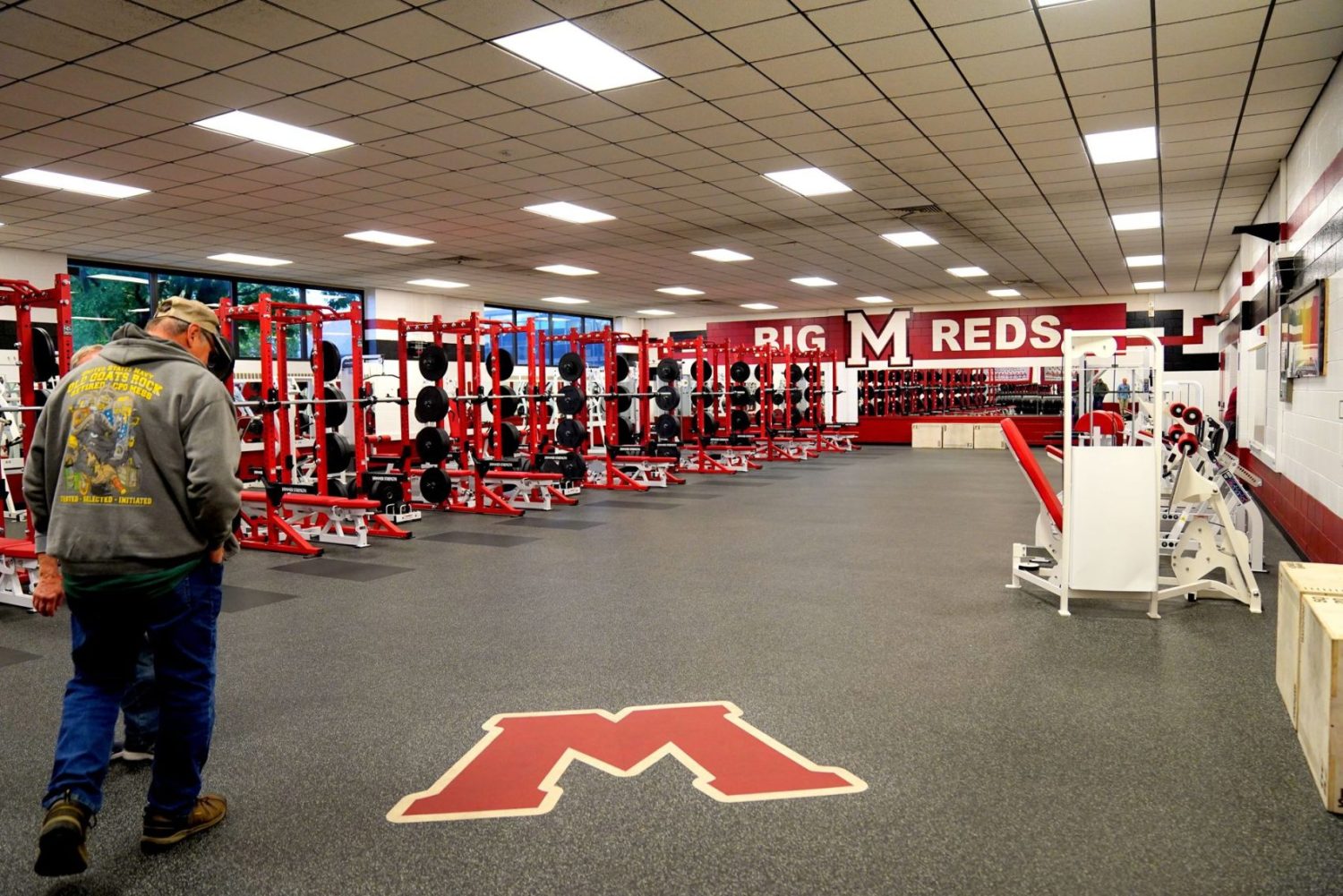 MUSKEGON–The dozens that gathered on this early autumn Monday in the atrium of Muskegon High School’s Redmond/Potter Gymnasium were in for a treat.

The evening was a reunion of sorts. A daughter of the late Harry Potter – a namesake of the building who had served as a Muskegon coach from 1927 until 1956, then as the school’s athletic director – was present, as were two of his granddaughters. Much of the crowd sported Red and White attire, school colors since its beginning. The majority in attendance were alumni, male and female, some young, others of an older vintage. Many were former athletes. A few residents from the longstanding neighborhood that surrounds MHS, were also present.

All were there to visit athletic facilities usually inaccessible to the general public. The occasion was the unveiling of projects completed by a “Support the Tradition” campaign that had launched in July of 2021 for the purchase of new LifeFitness Hammer Strength equipment and flooring in the Wellness Center located within Redmond/Potter. In addition, the drive allowed for the purchase of new lockers and flooring for the Big Red varsity locker room at historic Hackley Stadium. 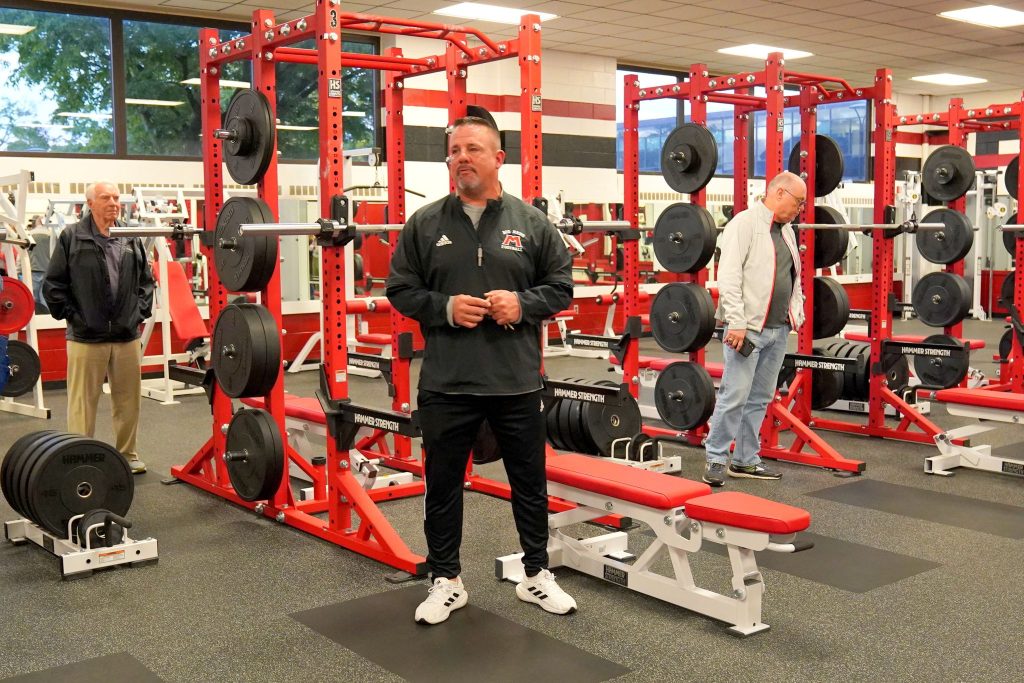 The fundraiser, guided by a committee of eight, raised just under $200,000 and wrapped up a year later.

Based on the smiles on their faces, all enjoyed seeing greenbacks converted into tangible tools that would benefit Big Red student/athletes for years to come.

The tour began in the school’s multi-purpose “Legacy Room” opened in 2019, a gift to the school by the Class of 1968. Among the largest to ever graduate from MHS, the space was outfitted with elevated theater-style seating by many who were involved with the newest campaign. There, John Usmial, chair of the committee along with coaches Shane Fairfield and Keith Guy, gave some background and insight into recent work done at the school.

Those in attendance were then allowed a first look at the new auxiliary gymnasium and locker rooms constructed at the high school thanks to a $104.7 million two-part bond proposal passed in 2020 by voters for upgrades to the district’s teaching facilities. Several marveled at the new court and locker rooms, flashing back to memories of the old basketball floor that once served the school. Opened in the late 1920s and in service until the late 1970s, that hardwood surface had been laid out on the raised stage of the school’s glorious expansive auditorium, several feet above the cascading audience seated below, and in the balcony above. Back then, an errant pass might bounce off the edge at any time. 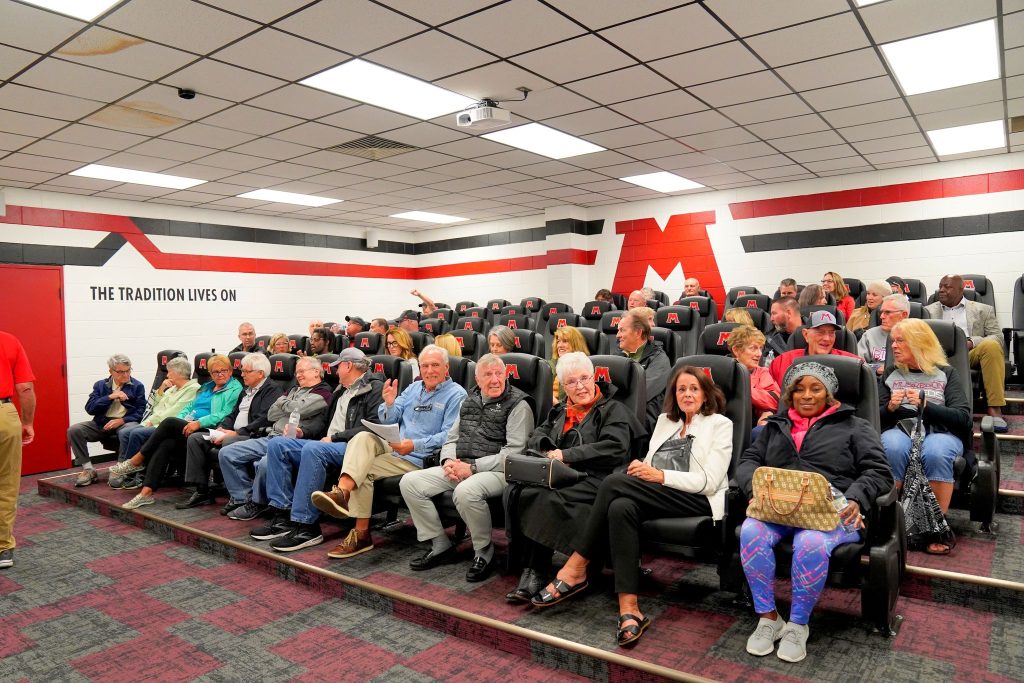 The “Tradition Campaign” was designed to address wish-list projects that would be untouched by the bond. Guy, who also serves as the school’s athletic director, helped identify areas of need.

So, the committee went to work, searching out names of past graduates and potential donors, sending out some 600 letters and emails, pitching the plans, and collecting dollars to add some icing to the millage upgrades. A total of 187 donations – an impressive 31 percent response rate – flowed in the door.

The new weight room, updated and outfitted with college-level equipment that all student/athletes can access, brought more oohs and aahs, as several remembered when such training wasn’t a big part of the game. Folks entering the space were told to avoid stepping on the red “M” inset into the new flooring.

“The kids that do,” said football coach Shane Fairfield, “need to drop down and do 100 pushups.”  As folks departed the room, one former Big Red, called out by former teammates for such an indiscretion, dropped to the floor to pay his penitence, garnering a big laugh.

Next on the tour was a trip down to the northern end of Hackley Stadium, built in 1927, and the varsity locker room, home to Big Reds on Friday nights. There, visitors were admitted to sacred space. On display were the collegiate-style lockers, painted red, filled with equipment, jerseys, and capped with helmets, each labeled with the names of the players that fill out the 2022 roster. A red LED-lit block ‘M’ mounted on an end wall casts a fitting glow within the space. 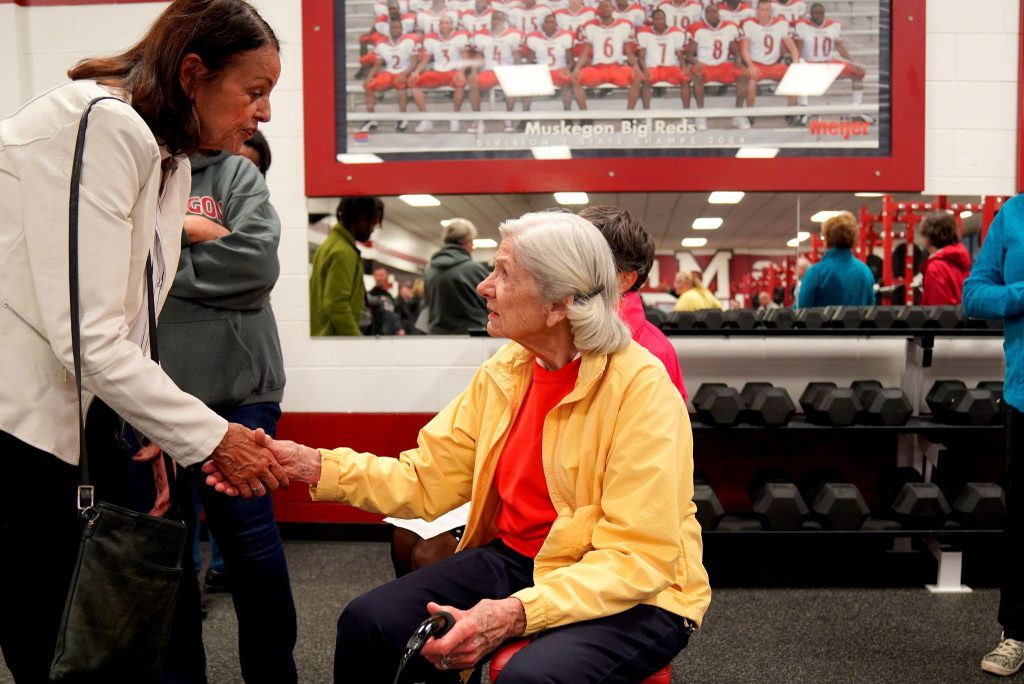 Not included within that campaign’s dollar total is the value of the sweat equity added by volunteers who invested time and effort into assembling and installing lockers.

“We knew how much money we had to spend,” said Jim DeVries, a member of the Class of 1968 who served on the committee. “You could buy them unassembled … I’m pretty mechanically inclined so I figured it couldn’t be that hard.”

That decision saved substantial dollars but initially brought some challenges.

“The instructions weren’t very good … they’d show you two pieces, and they looked the same. Well, they weren’t. Me and John Usmial … we spent four hours putting that (first) baby together. But once we knew how to do it, we set up some sawhorses and tabletops and brought in other alumni. We’d have like three or four at one time. Once you kind of bummed your way through one you could pretty well figure out how to do it. And then we found a way to do it faster.”

Finding a way to improve and speed up the process was a godsend, as there were 53 lockers in total to assemble. 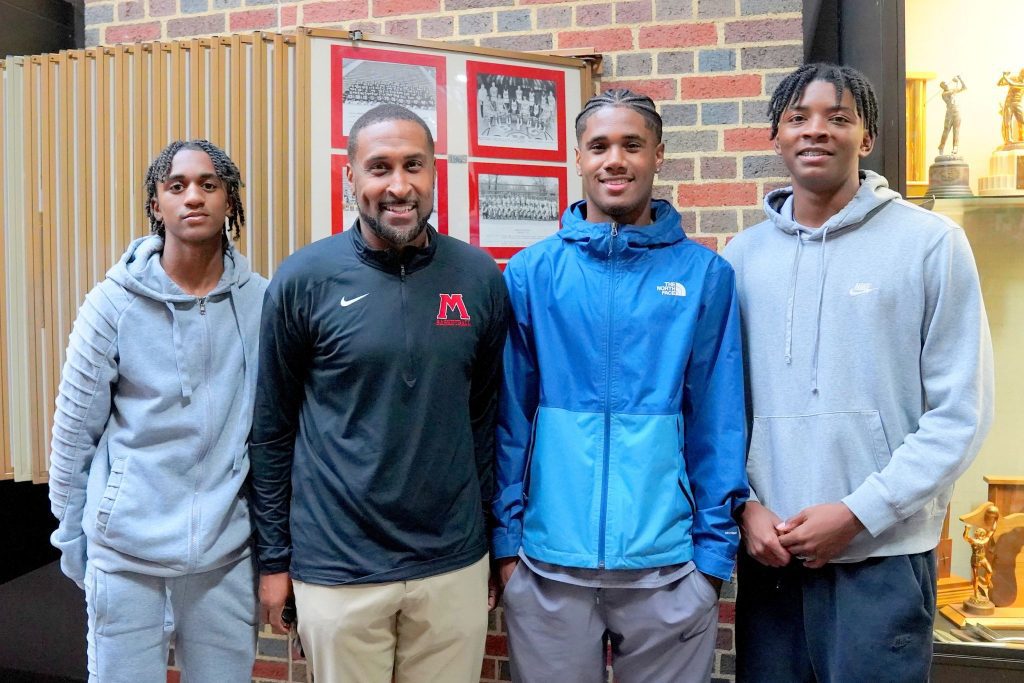 Once a Big Red

Perhaps the most fascinating aspect of the effort can be found in the demographics. Donors to the fundraiser spanned MHS graduation classes from the 1940s into the 2000s. The great majority came from the 15-year span 1960 to 1974, prime baby-boomer years that featured some of the largest graduating classes in the history of MHS. Now in their prime retirement years, many live in the area, but several reside or once resided outside of Muskegon following graduation, as jobs moved or disappeared when countless companies from the Port City’s industrial past relocated or vanished.

Consequently, it’s not surprising that gifts to the campaign came from multiple cities in Michigan, as well as from 22 other states.

Usmial and his wife, Barb, tapped into past business connections from the couple’s days working with the YMCA of Metropolitan Chicago, to ensure purchase dollars were maximized. Their extensive ‘Y’ fundraising experience helped guide the project.

“The personal ask is the most important,” said Barb, noting the key to the drive. Big Reds asking other Big Reds to support current and future Big Reds helped push the project to success. Tapping old classmate lists and parlaying Facebook comments and likes into donors were vital.

Previous generations established the Muskegon Big Red Athletic Foundation at the high school and propelled past projects like the purchase of an athletic transportation van, the building of a concession stand and installation of athletic history displays at Redmond/Potter, as well as many other projects.

Going forward, the hope is that the torch of fundraising and involvement in projects like this will get passed to the next generations of alumni, as those involved today recognize that dollars for “extras” like these projects generally don’t appear in tight modern-day urban education budgets.

“We’re (hoping) to cultivate people from the 1980’s and ’90,” said DeVries, contemplating the future. “We’re trying to get younger people involved.”

“I didn’t play football,” he added. “I just went to school there. I just loved that old school.” 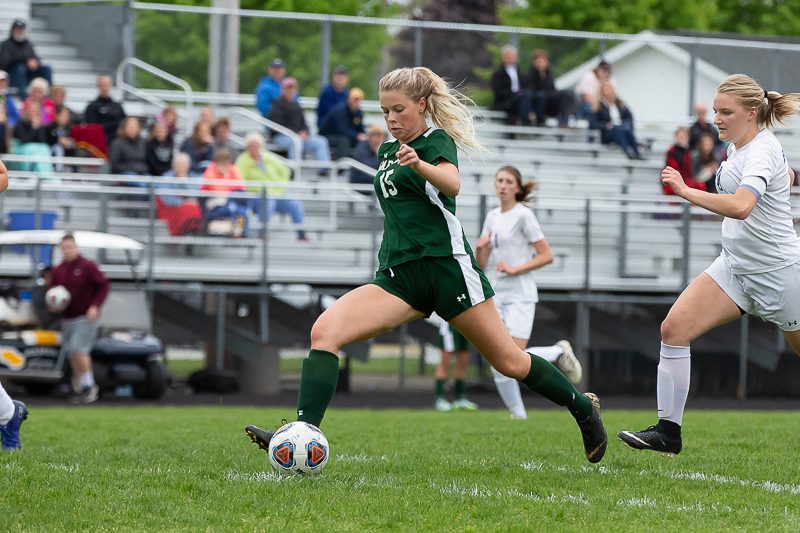 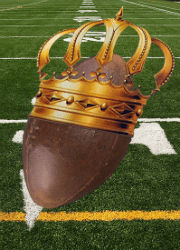