New Muskegon Lumberjacks coach Todd Krygier knows his team has a lot of talent and determination.

But that’s about all he knows for sure as the Lumberjacks prepare to kick off their fourth season in the United States Hockey League. 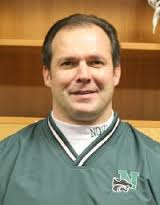 Muskegon opens the 2013-14 campaign Saturday night in Green Bay, plays the following Friday against Team USA in Ann Arbor, then returns to L.C. Walker Arena Sept. 28 for the home opener against Indiana.

The team hopes to improve on last year’s fourth-place finish in the Eastern Conference and first-round exit from the playoffs.

The new crop of Lumberjacks is very young, with only six players returning from last season, along with a host of new guys with little or no USHL experience. By contrast, Sioux City has 19 players back from last year’s team.

At the start of training camp this summer, the Lumberjacks had 16 unaffiliated players – that is, players who had not made commitments to college hockey programs. Most USHL teams have about 15 players who have signed letters of intent to play for various universities.

There were a few more experienced players at the start of training camp, but as Krygier and his coaching staff sorted through the roster and judged strengths and weaknesses, they ended up going with a big crop of younger guys who have yet to prove themselves.

There have been trades and other transactions in recent weeks as Krygier tries to find the right balance for his club.

Despite the team’s relative youth, Krygier believes he’s put together a winning group capable of competing with the best as the season unwinds.

“They all have the potential to be very good players in this league,” the coach said.

The hard fact is that Krygier and his staff started from behind. They were hired over the summer, after former members of the Lumberjacks front office picked players in the USHL draft in the spring.

“We had no idea what their thought process or plan was (in picking players),” said Krygier, a former NHL player who most recently coached at Novi High School near Detroit. “We stepped into the situation, and now it’s our job to take it and make it work.”

Krygier said he hasn’t been disappointed with the players he inherited. But he knows the level of experience is low, and the players will have to pack a lot of learning into the first few weeks of the season.

“The reality is we have six players with USHL experience,” Krygier said. “That’s it. We have 17 players who have never played in this league. At this point we’re young and inexperienced. We’re going to have to develop quickly.

“We’ve been spending a lot of time in practice – some unusually long practices – doing a lot of teaching and preparing these guys for this level.

“These are my players now, and I take a lot of pride in them. I really like our team. They work hard and they have talent and skill. We’re going to be successful. It’s just going to be a matter of growing quickly.”

Despite posting a 1-4 record in preseason tournaments, the Lumberjacks were highly competitive in all but one game, Krygier said. And the college scouts watching the tournaments were wildly impressed with many young Lumberjacks, to the point that 10 have now committed to various universities.

“(The scouts) were crawling all over our guys, and most of them haven’t played a game in the USHL,” Krygier said.

All but one of the Lumberjacks returning from last season are forwards, meaning offense could be a strength for the team. Returning up front are Connor Hurley, his brother Cullen Hurley, German native Frederik Tiffels, Matt Mendelson and Mason Jobst.

Connor Hurley has been selected as a team co-captain this year and is a second-round draft choice of the Buffalo Sabres. Jobst will be the other co-captain while Mendelson and newcomer Trevor Morbeck, a forward, will serve as alternate captains.

Unlike most of the new players, Sandler has previous USHL experience.

Goalie Jordan Uhelski, a Lumberjacks backup last year, will start in goal Saturday against Green Bay, although Krygier stressed that Eric Schierhorn will also get plenty of work in the net.

“Whoever gives us the best chance to win on any given night is who will play,” the coach said.

The defense will be completely manned by newcomers, including three who are expected to anchor the blue line in the early weeks of the season – Tommy Panico, Adam Larkin and Janik Moeser.

LSJ Gridiron Picks: The games have to be closer than last week … don’t they?