The duo of Smith and Waller combined for almost 300 rushing yards.Smith led the way with 184 yards on 14 carries and three touchdowns, while Waller added 107 yards on 12 carries and two touchdowns. 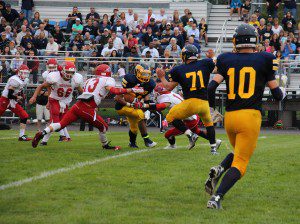 Venonell Smith gets ready to break through Holon’s defense for a big touchdown run. Photo/Jason Goorman

“The running backs need to thank their line and we also need to continue to block for each other.” said Waller about the team’s strength as an offense.

The Norsemen started the scoring by taking advantage of an early interception by Waller which gave them good field position at the Red Devils’ 35-yard line.

The 35-yard, nine-play  drive resulted in a 3-yard touchdown run by Waller. The extra point snap was botched, but was recovered by Erick Bleakley for a two-point conversion, giving the Norsemen an 8-0 lead.

Bleakley led the Norsemen at quarterback for the first time in his varsity career. He threw for 34 yards on four completions and did not turn over the ball.

“He didn’t turn the ball over but he tried.” said Norsemen coach Mike Belmonte jokingly. “He played well and this was his first start at quarterback since his freshmen year.”

Moments later, the Norse defense would continue to set the tone for the offense with a second interception by Ben Gautraud. 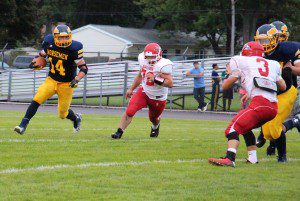 “Our defense played better then I thought we were going to play.” said Belmonte.“I’m pleasantly surprised. It’s a good start, but a good football team shows the biggest improvement from the first to the second game.”

The interception resulted with the game’s first big play, a 74-yard touchdown run by Smith on the drive’s first play giving the Norsemen a 15-0 lead after a successful extra point kick by Andrew Butzow.

Smith, who ended with three touchdowns, closed the half off with a 48-yard touchdown run which gave the Norsemen a 22-0 lead heading into the locker room.

But the Red Devils would continue to struggle at stopping the run late in the game. The Norse answered their touchdown with a 65-yard scoring run by Waller late in the third quarter. 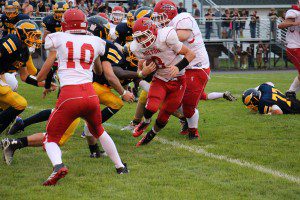 The fourth quarter was managed well by the Norsemen offense. The unit closed the scoring with a long 12-play, 50-yard drive which concluded with a 2-yard touchdown run by Butzow.

“Offense is the strength of our team going into the season, we have some guys in the backfield that are special guys.” said Belmonte. “We have to keep getting better up front if we are going to compete in the West Michigan Conference.”

Vernonell Smith rushes in for a touchdown before halftime. Photo/Jason Goorman

North Muskegon and Fruitport tennis teams power through regionals, move on to finals