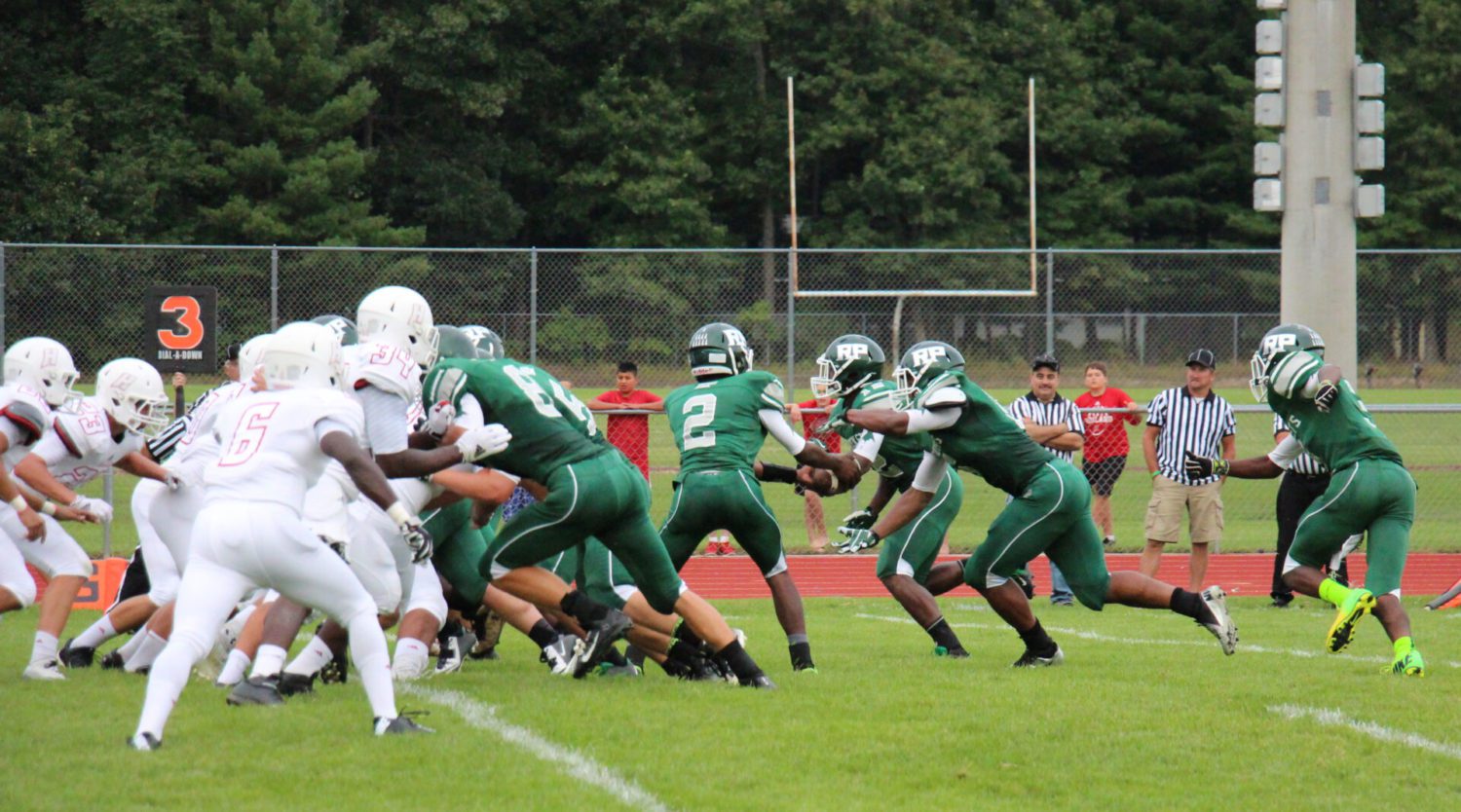 MUSKEGON – There’s good news for Reeths-Puffer fans who were worried about scoring after losing some key players from last season:

The new guys look pretty darned good, and DeAndre Oakes-Owens, a returning standout from last season, is better than ever. 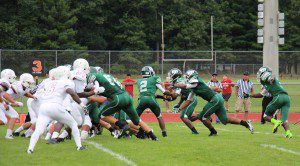 Even McCrary rushes in for the TD to put Reeths-Puffer up 6-0. Photo/Jason Goorman

The new starters and Oakes-Owens played key roles Thursday in helping the Rockets grab a 41-27 opening night victory over Holland in an O-K Black Conference matchup.

A big concern at Reeths-Puffer was the loss of last year’s offensive backfield, which helped power the team to seven wins and a playoff berth. Two of the backs graduated, while senior standout DeReko Riley is out with a hamstring injury.

But two new starting running backs showed Puffer fans they have nothing to fear.

Junior Jordan Cooley rushed for 132 yards on 15 attempts, including a 58-yard burst. He also stood out defensively, scooping up a fumble and running it back 80 yards for a touchdown and intercepting a pass.

Then there was Oakes-Owens, who did much of his damage from his defensive cornerback position. He shut down Holland’s passing game with three interceptions, and added seven tackles, including two for losses. He also caught four passes for 55 yards, including one touchdown pass. 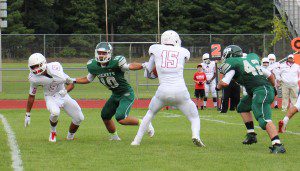 Reeths-Puffer’s No. 42 Tyler Habetler gets ready to take down Holland quarterback Wade Buckman as RP’s Austin Malotke reaches to do the same. Photo/Jason Goorman

Count Oakes-Owens among those who believe this year’s team may be better than the 2013 squad.

“The overall team speed is better, the team chemistry is better,” he said. “I think we’re going to have a great season this year.”

Reeths-Puffer coach Kyle Jewett was not completely thrilled with his team’s play – particularly its 11 penalties for 70 yards – but he did admit that Oakes-Owens was outstanding.

“He made them pay,” Jewett said. “That’s what you expect from your returning starters. He’s capable (of having a big season). He’s grown up over the years, we count on him a lot, and he showed his true colors tonight.”

Reeths-Puffer drew first blood with a 12-play scoring drive late in the first quarter, capped by a one-yard touchdown plunge by McCrary.

Holland answered in its next possession with a 13-yard, 61-yard scoring drive early in the second quarter. Mateo Cervantes did the honors for the Dutch, plunging in from one yard out to tie the score at 7-7.

Reeths-Puffer took the lead with 1:42 left in the half, following a seven-play drive that started at the Holland 47. Jordan Cooley pitched in with runs of 13 and 10 yards while Oakes-Owens added a 10-yard catch from quarterback Jalen Cooley. 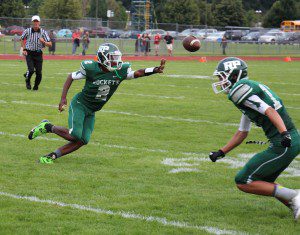 McCrary capped the drive with a another one-yard touchdown run.

Reeths-Puffer regained possession less than a minute later on Oakes-Owen’s second pick, but the Rockets threw an interception of their own two plays later, and Holland’s Aaron Rann returned it to the Reeths-Puffer 34.

Holland quarterback Wade Buckman hit Elroy Payne with a 21-yard scoring pass with four seconds left in the half. The extra point was no good, leaving R-P with a 14-13 edge.

The Rockets struck early in the third quarter, after Oakes-Owen’s picked off his third pass at the Holland 45 and returned it to the 32. Jordan Cooley exploded for a 23-yard run, then McCrary put the icing on the effort with a nine-yard touchdown run, putting R-P up 21-13.

The Dutch kept pace with a 14-play touchdown drive that started at their own 34. Cervantes plunged in from five yards out with 4:43 left in the third quarter, but a two point conversion failed, leaving Reeths-Puffer up 21-20.

It was all Reeths-Puffer from there.

The Rockets ended the third quarter with a six-yard scoring drive, sparked by a 58-yard scamper on a reverse by Jordan Cooley that left the ball at the Holland 20. McCrary scored from two yards out a few players later, giving Reeths-Puffer a 27-19 edge.

Cooley’s interception, with 10 minutes left in the game, gave the Rockets the ball at the Holland 45. They scored five plays later on a 24-yard touchdown pass from Jalen Cooley to Oakes-Owens. 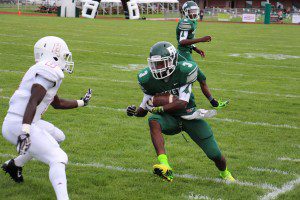 Jordan Cooley rushes up the sideline after catching the pitch. Photo/Jason Goorman

The Rockets finished their scoring when Jordan Cooley picked up a Holland fumble around the Reeths-Puffer 20 with 6:25 remaining and raced back 80 yards for a touchdown, putting his team up 41-19.

Holland added a touchdown with 2:35 left on a 14-yard run by Cervantes, but it was too little, too late.

Jalen Cooley completed 4-of-5 passes for 55 yards and one touchdown in his first start for Reeths-Puffer. Sean McWilliams and David Gordon contributed to a strong R-P defensive effort with five tackles apiece.

Buckman completed 12 of 23 passes for Holland for 160 yards, but was burned by four interceptions.