FREMONT – For the Fremont boys cross country team, the distance between a mediocre season and a regional championship was about 500 miles.

Fremont, a perennial power on the Michigan high school cross country scene, might have been expected to have a rebuilding season with a roster full of underclassmen. 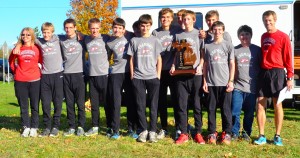 But last spring Packer Coach Cliff Somers challenged each of his varsity runners to log 500 miles over the summer, which is quite a lot of running during the hot and muggy season.

According to team member Sam Kaastra, four team members met that goal while another three finished in the high 400s.

With so much preparation prior to the season, the Packers hit the trail running, so to speak, and have surpassed their own expectations.

They successfully defended their Lakes 8 Conference title this fall, capping off the league season with four runners finishing first through fourth in the conference meet.

Last weekend the Packers did even better, winning a Division 2 regional championship in Traverse City with five runners placing in the top 15, and their top four finishing fourth through seventh.

Andrew Goodspeed, the senior leader of the team, finished 13th with a time of 17:04.

The Packers cruised to victory in the meet, totaling a miniscule 35 points, well ahead of runner-up Sparta, which had 96 (the lower score wins in cross country).

The regional championship established Fremont as a contender to win the team title at Saturday’s Division 2 cross country state finals at Michigan International Speedway in Brooklyn.

“The 500 miles of training is the main reason we’ve gotten anywhere,” Kaastra said. “How much Coach Somers stressed that, and the bar that we set for ourselves, both stand out.”

Winning regionals was a huge accomplishment for such a young team. Fremont’s top four runners – Zerfas, Hamilton, Kaastra and Stitt – are all sophomores.

The 10th graders been running together since the 7th grade at Fremont Middle School, and have consistently told one another that they could start winning as soon as they reached high school.

They ran the 500-mile challenge together this summer. When the season began they started challenging their other teammates to improve, and their teammates pushed back.

As a result, everyone on the team is better than they were a few months ago.

That matters a great deal in cross country races, from a team standpoint. The top five runners earn points for their team, based on where they place. The rest of the team is responsible for pushing the top five and helping them improve their times.

“What (people) don’t realize is that you can have one or two guys stand out, but what it really comes down to is the (number) four, five, six and seven runners on the team,” Kaastra said. “Those are the guys who win the meets, who push us to get better.”

When five runners from the same team finish in the top 15 – like the Packers did at regionals – the result is always impressive.

“The last couple of meets we have been really closing down on our 1-5 split (the time separating the team’s top five runners), getting it under a minute at regionals, which is pretty important,” Somers said. “That’s a strength for us.”