The Lakers canned 28-of-34 free throws, including 13-of-15 in the fourth quarter, to defeat the Vikings 56-45. Spring Lake advances to Wednesday’s district semifinal game against Orchard Viev at 7:30 p.m. 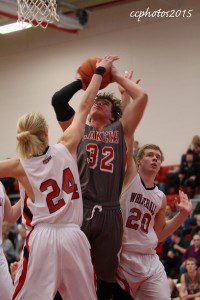 Zachary Montgomery goes up for a shot while Whitehall’s No. 24 Patrick Johnson and Keenan Aylor contest. Photo/Carol Cooper

“I think I watched seven or eight Spring Lake games and they are great with the lead late,” Whitehall coach Nate Aardema said. “They are smart. And the one guy we know we don’t want handling it is Zietlow.”

Indeed, it was Kyle Zietlow who led the way for Spring Lake. He finished with 18 points,  with 12 coming from the line. He was 10-for-10 from the charity stripe in the final quarter and 12-for-12 for the game.

It didn’t appear the Lakers would need the key free throws down the stretch after earning a 33-19 halftime lead. But the Vikings came back with a 15-3 advantage in the third quarter, led by two 3-pointers from Patrick Johnson..

“They came out aggressive and scrappy (in the third quarter),” Spring Lake coach Bill Core said. “We lost our mental toughness a little bit.”

“We did three quarters of real good basketball and had our struggles in the third quarter, of course,” Core said. “We also regained our composure  and scored 20 in the fourth. 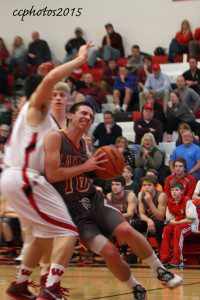 Keegan George, a junior, chipped in with 13 points for the Lakers. He also suffered an ankle injury late in the game. Zach Montgomery finished with eight rebounds and three assists.