KENTWOOD — Andrew Ward’s lips were trembling and goose bumps covered his bare arms as blustery winds and snow flurries flew at his face.

The afterglow of Muskegon’s 19-8 victory over Edwardsburg in the Division 3 state semifinals at East Kentwood High School on Saturday was enough to warm the hearts every Big Red player, coach or fan.

That’s because Muskegon is now on its way to Ford Field in Detroit to play for a state championship.

“It’s an amazing feeling to be able to go back to Ford Field with my teammates,” Ward said. “But we’re still knocking on the doorstep. We’ve got one more win to go.”

Behind a tremendous defensive effort that limited a respectable Edwardsburg offense to just 138 total yards of offense, the Big Reds put themselves in a position to win their 18th state championship in school history. 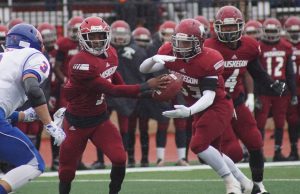 Standing in the way will be Orchard Lake St. Mary’s, which advanced with a 49-7 rout of Dearborn Divine Child.

The state title game will be Saturday at 7:30 p.m. It’s a rematch of the 2014 state championship that St. Mary’s won by a 7-0 final. But this year’s Big Reds are more experienced at key positions, more versatile offensively, and hungry to end an eight-year state title drought.

It took some time on Saturday for the Big Reds to find their groove offensively against the Eddies, due to a slick, snow-covered turf that limited big plays for both squads.

After a scoreless first quarter, the Big Reds put 13 points on the board in the second quarter, with Ward scoring on a 11-yard touchdown run with 9:17 left in the quarter, and junior quarterback La’darius Jefferson turning in the most explosive offensive play of the game a couple minutes later.

The 6-foot-2, 210-pound Jefferson, who has alternated at quarterback with senior Kalil Pimpleton throughout the season, made his presence felt on his very first snap, busting free for a 79-yard touchdown run that was keyed by a great downfield block by Pimpleton.

Jefferson also contributed with a huge play at linebacker, stepping in for an injured teammate and making a big tackle for a loss on a fourth-down run by the Eddies’ Austin Cline to keep the game 13-0 at halftime. 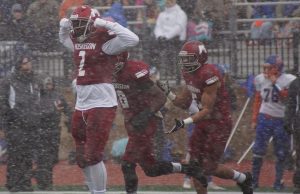 “He’s just a big boy who likes to go downhill,” said Muskegon head coach Shane Fairfield of Jefferson. “He waited for his opportunity and his moment and he’s just a whale of a football player. The kid comes in and makes a heck of a play on defense. The kid played the entire second half on defense, which I think was good for him because it kept him warm.”

Muskegon put the finishing touches on the victory early in the third quarter. Jefferson made a heads-up play on a scramble during the opening drive, lateraling the ball downfield at the last second to an uncovered Pimpleton, resulting in a 30-yard gain. Jefferson found the end zone on the next play, scoring on a 3-yard scamper.

With their Wing-T offense unable to create big gains against a stout Muskegon front seven, Edwardsburg wasn’t in a good position to make a comeback. The Eddies avoided the shutout with a 21-yard touchdown run by Cline with 2:34 left, but it was far too late for a squad that entered the game averaging 372 yards and 42 points a game.

Pimpleton had just four carries in the second half but finished with 100 yards on 14 rushes for the Big Reds. 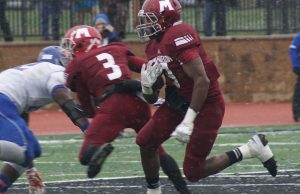 Quarterback Cameron Ekanayake was the leading rusher for Edwardsburg with 78 yards on 14 carries. The Eddies completed only one pass.

Ward said he distinctly remembers the battle against Orchard Lake St. Mary’s two years ago, but added that this year’s team is better prepared for state championship glory.

“I remember it was a close game throughout,” he said. “We were running the same stuff that we’re running now, but now we’re more experienced and I trust my teammates in anything that we do.

“A lot of us have been playing together since we’ve been nine,” Ward added. “It feels great that I get to go indoors with my brothers and go play on the big stage.”