MUSKEGON – The Muskegon Catholic boys’ soccer team is living proof that you should never, ever give up, no matter how hopeless a situation may seem.

After experiencing a disheartening eight-game winless streak early in the season (six losses, two ties), MCC is on a roll.

The Crusaders have won four straight games in the Division 4 state tournament, collecting district and regional championships along the way. 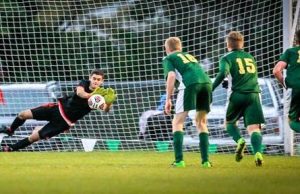 Two of those victories have come against highly-favored, state-ranked teams from North Muskegon and Grand Rapids Covenant Christian.

Now the Crusaders, 11-7-4 on the season, are ready for Wednesday’s Division 4 state semifinal game against Kalamazoo Hackett at 6 p.m. at East Kentwood’s Creston Middle School.

The winner will advance to Saturday’s state championship game against the winner of the Genesee Christian-Ann Arbor Greenhills semifinal.

Hackett (16-4-1), like North Muskegon and Covenant Christian, comes into the semifinal as a state-ranked team that will probably be favored. But the Crusaders seem to thrive on being underdogs, and they certainly aren’t scared.

“Hackett has been destroying everyone that they’re playing,” MCC Coach Bill Moulatsiotis said after beating Covenant Christian. “(They) have been highly-ranked all year long. But so was North Muskegon and and so was Covenant.

“We like to be the underdog. We’ve got a chip on our shoulder no matter what.”

MCC had high hopes heading into the season, with a lot of experienced players expected back from last year’s squad. 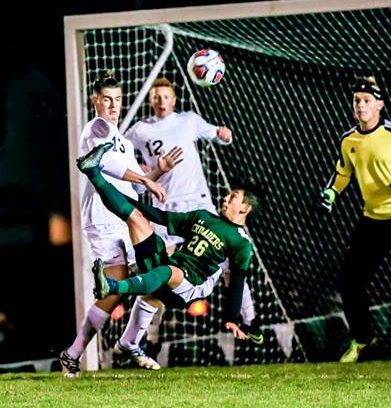 Jose Mojica scores the game-tying goal off a bicycle kick for MCC in the regional finals. Photo/Tim Reilly

Then morale sunk when four key seniors announced they were going to skip the soccer season to concentrate on other sports.

Early in the season MCC had a not-so-pretty 3-6-2 record, with a few ties tossed in. To make matter worse, the players were not playing the way they had been taught, according to Moulatsiotis.

“I think the kids just needed to grow up a little bit,” the coach said. “They had a hard time growing into the system. They were a little slow to buy in. They wanted to do things their own way.

“We were about to play Muskegon, and I remember saying ‘Guys, just try it my way. You haven’t even given my way a try yet.’ We were up in that game by one, then they tied it with a last-second goal. Our defender wasn’t playing according to the system, which allowed (Muskegon) to tie it.

“Afterward I said, ‘Look, if we had been playing the way we should have been playing, the keeper would have made the save and we would have won instead of getting a tie.’

“The next game we started playing a little better and got a victory. Then it just started snowballing. The more success we had, the more the guys started believing in and playing disciplined soccer.”

MCC’s fortunes were bolstered at midseason when two seniors who originally chose to skip the soccer season – defender Nate Sullivan and midfielder Collin Powers – decided to rejoin the team, bolstering a small roster that only had 13 players.

Meanwhile senior goalkeeper Conner O’Neill, who had showed great promise in previous years, started the season in a bit of a funk, according to Moulatsiotis.

Part of the reason was the loss of the team’s goalkeeper coach, who pursued another opportunity at a different school before the season started, leaving the post vacant at MCC.

Then TJ Prince, a former All-State goalkeeper for the Crusaders, stepped forward and started working with O’Neill, and it made a world of difference, Moulatsiotis said.

“Conner had shown promise to be better than any keeper at Catholic, then he started out a little shaky,” the coach said. “But then TJ started working with him and he started blooming. His performance against Covenant Christian (in last week’s regional finals) was virtuoso.”

With two key seniors back on the team, and O’Neill regaining his form in goal, MCC started to roll. The Crusaders finished the regular season at the .500 mark in wins and losses and headed into the Division 4 district tournament with a lot of confidence.

“I would say at the beginning we were really struggling and had our heads down for awhile, but once we started to play with heart, we found the back of the net and started to produce and got our heads back into it,” said MCC senior defender Zeke Jacobs.

Few people outside of MCC noticed the Crusaders’ sudden momentum.

All eyes were on North Muskegon and Western Michigan Christian, two teams ranked among the top five in the state. They drew each other in the first round of districts, and most agreed that the winner of their showdown would make a long run in the state tournament.

No. 9 Collin Powers battles his way up field for MCC in its regional final win over Grand Rapids Covenant Christian. Photo/Tim Reilly

North Muskegon beat WMC, then played MCC in the semifinals. Nobody expected the Crusaders to give the Norse much of a fight. So just about everyone was shocked to learn that they not only gave them a fight, but handed them a stunning 2-1 defeat.

MCC rallied in the second half for the victory. Nick Morgenstern tied the game with a penalty kick, then Jose Zambrano added the game winner after taking a long pass from teammate Bobby Ahern.

“Having the media and opposing coaches cast the WMC-North Muskegon game as a ‘state championship level game’ only fed our fire,” Moulatsiotis said after the victory.

The Crusaders did not let off the gas after their big upset victory, defeating Kent City Algoma Christian 6-1 in the district championship game.

The going got tougher against Buckley in the first round of regionals.

The game was scoreless headed into the final minute of regulation. MCC finally scored the winning goal with only 39 seconds left when Zambrano gained possession of the ball on the left wing, attempted a centering pass, and the ball hit a Buckley defender and ended up in the back of his own goal.

“It was a quality win for us and we’re happy about it,” Moulatsiotis said after beating Buckley. “I don’t think we’ve played our best soccer yet. We’re still searching for that.”

The Crusaders played a great game against Covenant Christian in last week’s regional finals. They trailed 1-0 at halftime after Covenant scored 20 seconds into the contest. They tied the game in the second half when Jose Mojica scored with an acrobatic “bicycle kick” with 19:12 remaining.

The game was still tied after two overtime periods and a five-round overtime shootout, when each team scored three times.

That led to a dramatic sudden death shootout, and the Crusaders responded. O’Neill put the Crusaders in a position to win with a tough save of a Covenant Christian shot, then Mojica kicked in the winning goal to secure a 2-1 victory and the regional title.

“When they scored 20 seconds into the game I was worried that our guys might get deflated, but they just kept playing hard and getting stronger as the game went on.” Moulatsiotis said. “Then Mojica gets the bicycle kick to tie it. I’ve never seen that in high school soccer, and I’ve been around a long time.”

“Covenant Christian was the ultimate goal for us,” Jacobs said. “We hadn’t beaten them in seven years. That was extra special, especially for our coach, since he’s stepping down at the end of the year.”

MCC is fully prepared for another tough challenge on Wednesday against Kalamazoo Hackett, a traditional power that’s been ranked among the top teams in the state all season. Hackett was a state finalist last year before falling to Genesee Christian in the title game.

“I like our chances, but we’re going to be playing on artificial turf, which we’re not used to, so we’re preparing for absolute war,” Moulatsiotis said.

“The question is whether our bodies can hold up. Our guys have been pushing themselves to the limit every game. Nate Sullivan had to be helped out there to get his regional medal. He was completely spent.”

After coming this far, Jacobs said the Crusaders will not be sidetracked by fatigue.

“We’re ready to go for sure,” he said. “With all the work we put in during the offseason – running and agility training every single day – we are ready for this moment. We knew we would have a small roster, and we prepared.”