Last fall she learned she was accepted into the National Honor Society.

Considering what she’s been through over the past few years – physically and mentally – those are truly amazing accomplishments. 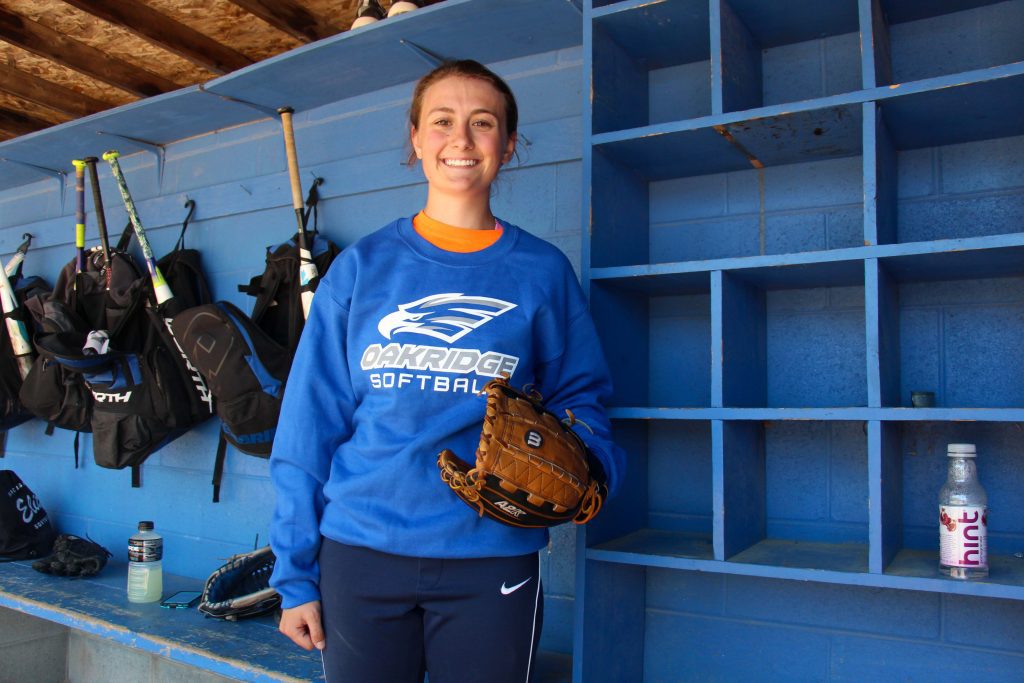 Holly Wydeck, who is back on the Oakridge softball team after suffering a scary brain injury two years ago. Photo/Jason Goorman

Wydeck was a freshman in the spring of 2015, starting in right field for the Oakridge varsity softball team. That was quite a feat for someone so young, since Oakridge has one of the best softball programs in the area.

But her first varsity season came to an abrupt halt in early May of that year, when she was hit in the head by a softball thrown wildly by a teammate during warm-ups.

The hard throw knocked her out for a few moments, and she was taken to the hospital, where doctors did a CAT scan and determined she was bleeding from the brain.

She was released after a few days, but has been experiencing difficult complications ever since. She endures random periods of severe depression-like symptoms, and tests revealed a loss of reading comprehension.

Meanwhile, doctors said that another blow to the head, in the same spot, could potentially be fatal, according to her father. They suggested that future athletic competition may not be wise.

That’s where Wydeck drew the line. She agreed to wear special protective head gear during practice and games, then pushed on with her softball career when the next season rolled around.

Her decision paid off. She’s currently the hottest hitter on a state-ranked Oakridge team that will compete for a Division 2 district championship on Saturday at Cedar Springs High School.

“I wasn’t going to stop playing softball,” Wydeck said. “Softball kind of gets me through life. I was not going to live in fear.”

Her parents supported her determination to get back on the field.

“My wife and I talked about it quite a bit,” said her father, Bill Wydeck. “Holly was adamant about playing again. She didn’t even want to leave the game that night (when she was hit by the ball).

“It would have been devastating for her, after all of this, to not be able to play again. And softball is not much of a contact sport. But they told her she had to be very, very, very careful.”

The blow to the head occurred during a game at Montague High School in 2015. Oakridge was headed out to the field to warm up between innings. The infielders were already taking grounders and throwing the ball back to first base, and Wydeck was headed out to her right field position.

One of the throws from an infielder was wild, and caught Wydeck square in the head. 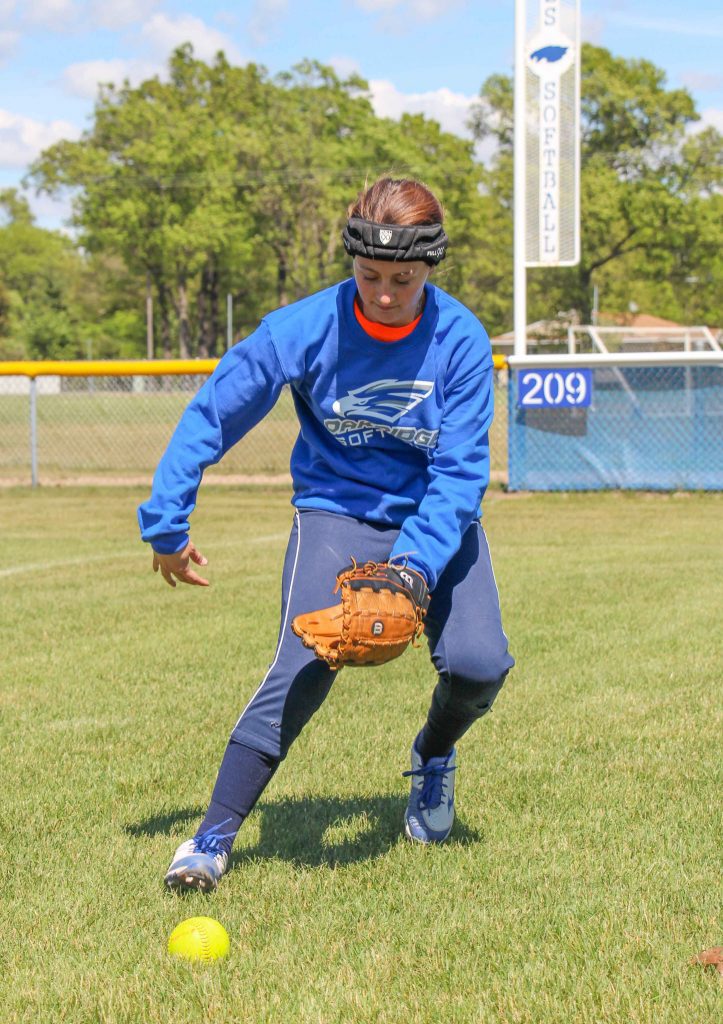 Wydeck works out during a practice this week. Photo/Jason Goorman

“I stopped to sneeze behind first base, and suddenly I felt like I got punched in the head,” Wydeck said. “I remember waking up and seeing everyone around me, then it clicked that I got hit in the head.

“I remember the trainer taking me to the dugout, and saying they were going to call an ambulance, but my dad said he would take me to the hospital. I started bawling because I still wanted to play.

“It felt like we waited for hours in ER, then a doctor came and said they were moving me to a room in ICU because I had bleeding on the brain. I remember they had to wake me up every hour and I had to get CAT scans every morning.”

After several days in intensive care, Wydeck went home, but missed the rest of the softball season.

“I had to stay home from school for a week,” she said. “I couldn’t even bathe myself at first. My mom had to help me with a lot of things. It was hard.”

Bill Wydeck remembers being dazed by the news that the injury was so serious.

“As soon as I heard ‘bleeding on the brain,’ I was like ‘this is not happening,’” he said. “At that point I kind of zoned out a bit. They explained that if we hadn’t come in, the bleeding may not have stopped.”

The long road back

Wydeck’s road back to varsity softball, and then the starting lineup, was not easy.

She went out for varsity as a sophomore, but was not performing up to par. It became obvious to longtime Oakridge softball coach Joe Coletta that she needed to spend a season on the junior varsity squad, to regain her confidence and sharpen her skills. 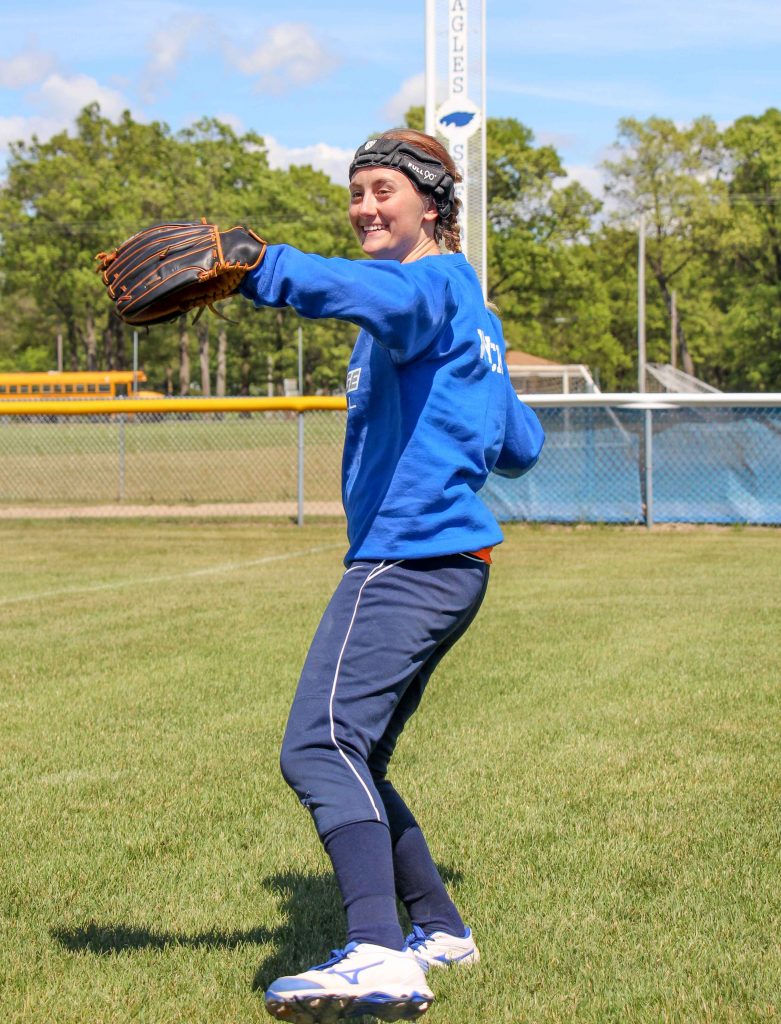 “She played a lot of travel ball when she was younger, and was a very skilled softball player,” Coletta said. “She started out with us as a freshman and earned her spot. Softball has never been just a hobby for her. She put a lot of time in to be good at it, and when this happened it put her way behind schedule.

“When she came back as a sophomore she was not her normal self. She was a bit tentative, a little apprehensive about everything we did. So she didn’t make the varsity. That was a hard thing for her to process, but I really felt it was the best thing for her. I wanted her to play JV and get her confidence back.”

Wydeck took the news hard at first, then accepted the decision, went down to the JV team, and worked as hard as she could to return to top form.

“A lot of girls on the JV team didn’t know as much about the game, so I helped them out with stuff and kind of became a leader,” she said. “I played wherever the coaches needed me to play, because I can play any position, and we ended up winning the conference championship.”

Wydeck made the varsity squad this spring, but wasn’t in the starting lineup for quite some time.

“To be honest, she was not one of our top three outfielders at the start of the season,” Coletta said. “She still had to prove herself. She started out as kind of a role player. She played defense only, which was kind of by design, because she still wasn’t real confident at the plate.

“But she came to practice every day, had a great attitude, and as the season wore on, probably about mid-year, we put her back in the lineup.”

Since then Wydeck has been starting in left field and is hitting a sizzling .488. Her hot bat has obviously been noticed, because she was recently chosen by league coaches as a first-team All-West Michigan Conference selection.

“She just earned her way back,” Coletta said. “She’s paid the price, cut no corners, and overcame tremendous obstacles and confidence issues. I just think it says a lot about her character, and her will to contribute to our team. I’m really proud of her in a lot of different ways.”

Wydeck said she refused to be discouraged by her lack of playing time early in the season.

“I just knew that since I wasn’t starting, I had to put more work into things as much as I could,” she said. “I knew I had to start watching the ball better. I still have my off days (at the plate), but when I’m on, I’m on.”

Wydeck still faces a lot of challenges in her everyday life.

The periodic depression-like symptoms, which remain undiagnosed, can come at any time. She’s missed some school and some softball games while dealing with that issue.

“She has a hard time functioning during those episodes,” her father said. “Sometimes I will ask her how she’s doing and she will cry. She made a base-running error at a tournament this season and she cried over that. She doesn’t normally react that way. But I think her medication is helping a lot.”

“Sometimes it happens at school,” Wydeck said. “I just start crying, and everyone is like ‘what’s wrong?’ A lot of times I just want to sleep. But my parents help me out a lot with it, and so does my team.”

The loss of reading comprehension had been tough for Wydeck, who has always been an outstanding student. But she applied the same philosophy in the classroom as she did in softball – if things are a little more challenging, she works even harder.

She has kept her grade point average in the lofty 3.8 range, and last fall she learned that she had been accepted into the National Honor Society.

“I just knew I couldn’t let (school work) go,” she said. “I want to get into Michigan State, so I’ve been taking all the extra classes I can. I study my butt off and make sure I get my homework done when I get home, right after practice. I put school first.”