“We’ve put it behind us,” said Sailors senior quarterback Tristan Robbins. “It’s our goal to win a state championship, and we haven’t lost sight of our goal.”

Mona Shores took the first step toward making that a reality on Friday, easily dispatching Portage Central in the opening round of the Division 2 playoffs at Sailor Stadium, 45-17.

The Sailors, 9-1 overall, advance to next week’s district championship game at undefeated Forest Hills Central, which breezed past Mattawan in its opening-round contest, 40-14. 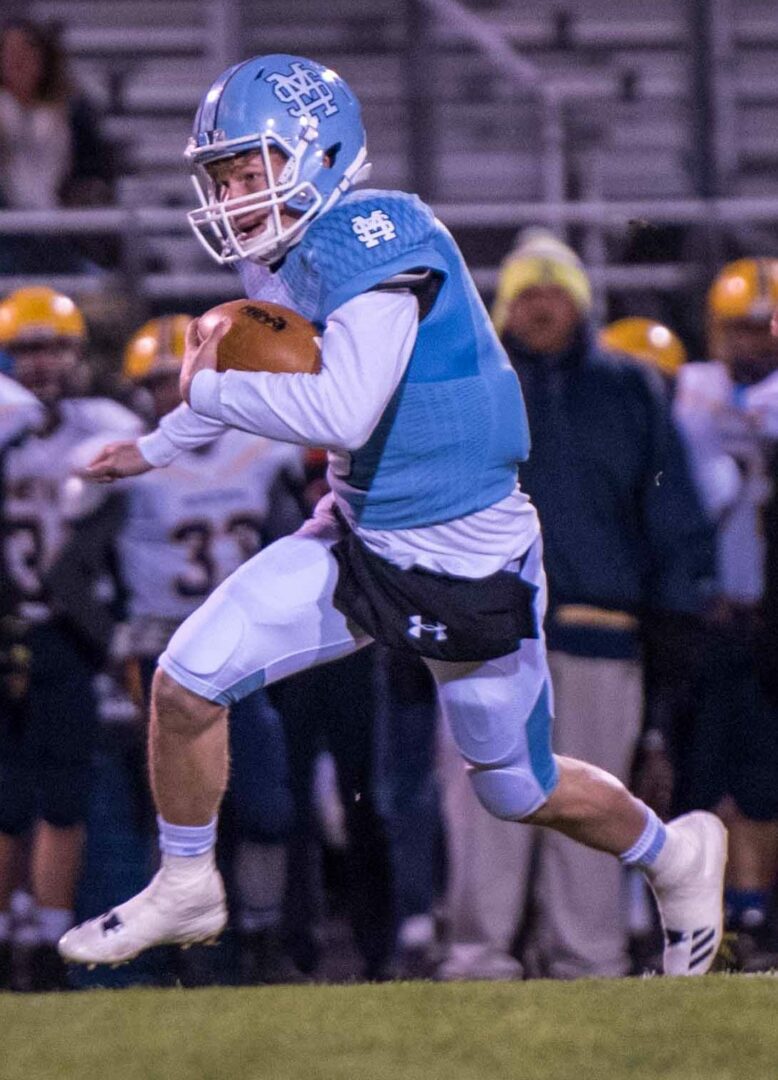 Tristan Robbins takes the ball up the middle for a big gain. Photo/Eric Sturr

Robbins was dazzling with his feet in running the Sailors’ blazing read-option attack. He had six runs of 15 yards or longer and totaled 217 yards on 16 carries.

When the Mustangs tried to stack the box defensively, Robbins simply relied on his arm, connecting with senior receiver Keyshawn Summerville on three touchdown passes of 43, 45 and 37 yards.

“Keyshawn is a hard guy to cover,” Robbins said. “He was beating their corners and he’s got great hands. It’s nice throwing to him.”

Mona Shores had to overcome an early deficit.

The Mustangs caught the Sailors’ defense off guard with quick play-action passes on their opening drive, including a 13-yard touchdown pass from quarterback Carson Hodge to tight end Kyle Dotson barely a minute and a half into the contest.

“We saw it on film, but it’s tough to simulate the speed of it, especially with that tight end bump (route),” said Mona Shores coach Matt Koziak. “But our kids adjusted to it and I thought we really flourished the rest of the way.”

The Sailors buckled down and forced Portage Central to punt on four of its next five possessions. The fifth possession ended with an interception by Sailors’ senior safety Austin Flowers.

Meanwhile, the Sailors’ offense couldn’t be stopped. The unit totaled 467 total yards and didn’t have to punt the entire contest. 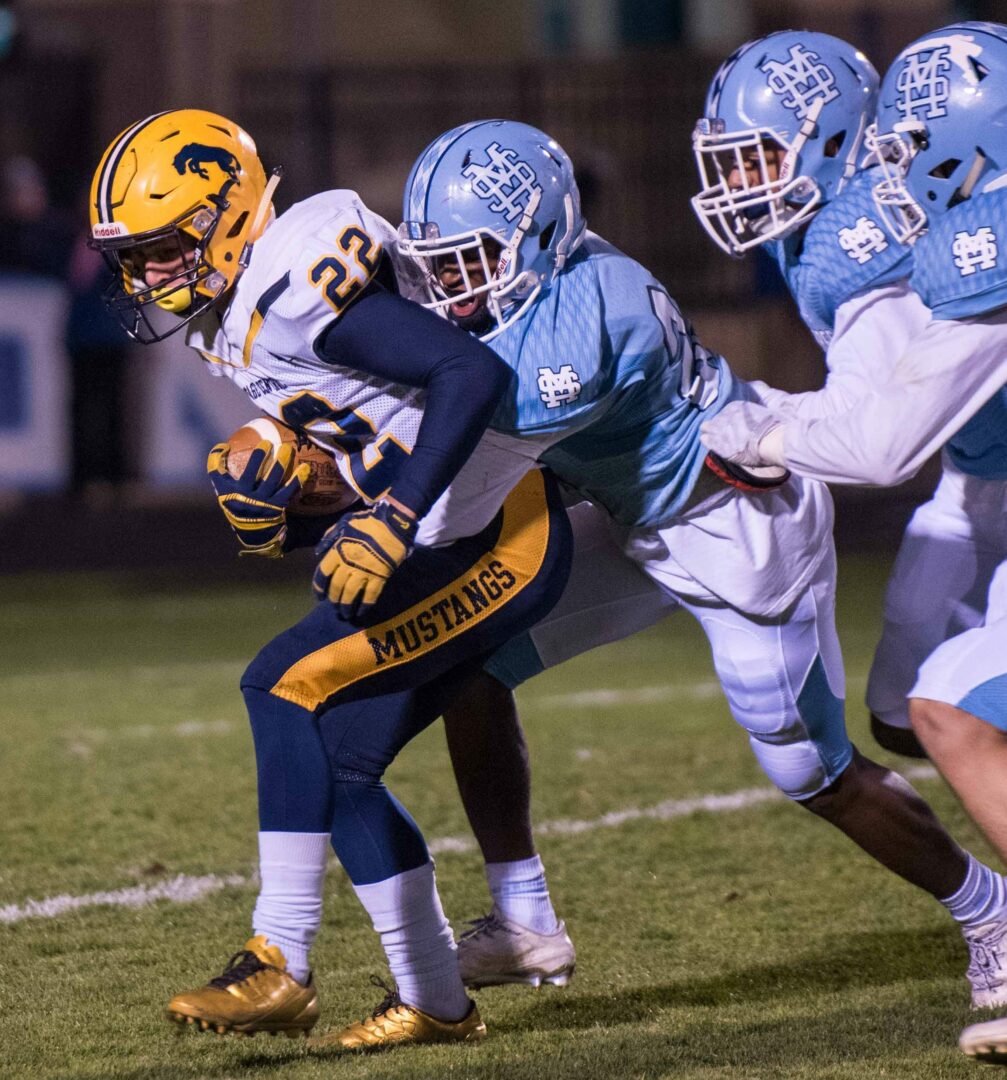 Robbins scored on a 29-yard scamper up the middle to get Mona Shores on the board, and the Sailors added a 37-yard field goal by Flowers to grab a 10-6 lead after one quarter.

Flowers’ diving interception of Hodge early in the second quarter set up Robbins’ second touchdown run, a 30-yard sprint that gave the Sailors a 17-6 advantage.

The lead swelled to 31-6 after back-to-back deep TD tosses from Robbins to Summerville.  Robbins only completed 3 of 5 passes on the night, but totaled 125 yards.

Portage Central cut its deficit to 31-9 following a 37-yard field goal just before the half, but Mona Shores remained in control throughout the third quarter.

Robbins made it a 38-9 game with his most impressive run, a 42-yard score that saw him nearly stumble to the turf at the 5-yard line. But as a Mustang defender closed in for the tackle, Robbins regained his footing, spun away and jogged into the end zone in a tremendous athletic display.

“We knew they’d probably be squeezing down on our fullbacks, so we knew there’d be some holes to run through,” Robbins said. “Our offensive line did a great job of getting off (linebackers) and paving the way.”

The Sailors lost starting guard Jacob Dethloff to a leg injury in the first half, but have flourished all season with the “next man up” mentality. It’s been needed, as they’ve lost a handful of key contributors in the last few weeks, including junior standout Damari Roberson to a torn ACL.

“It’s a credit to the kids for keeping that mindset,” Koziak said. “We’ll see if we can keep it rolling.” 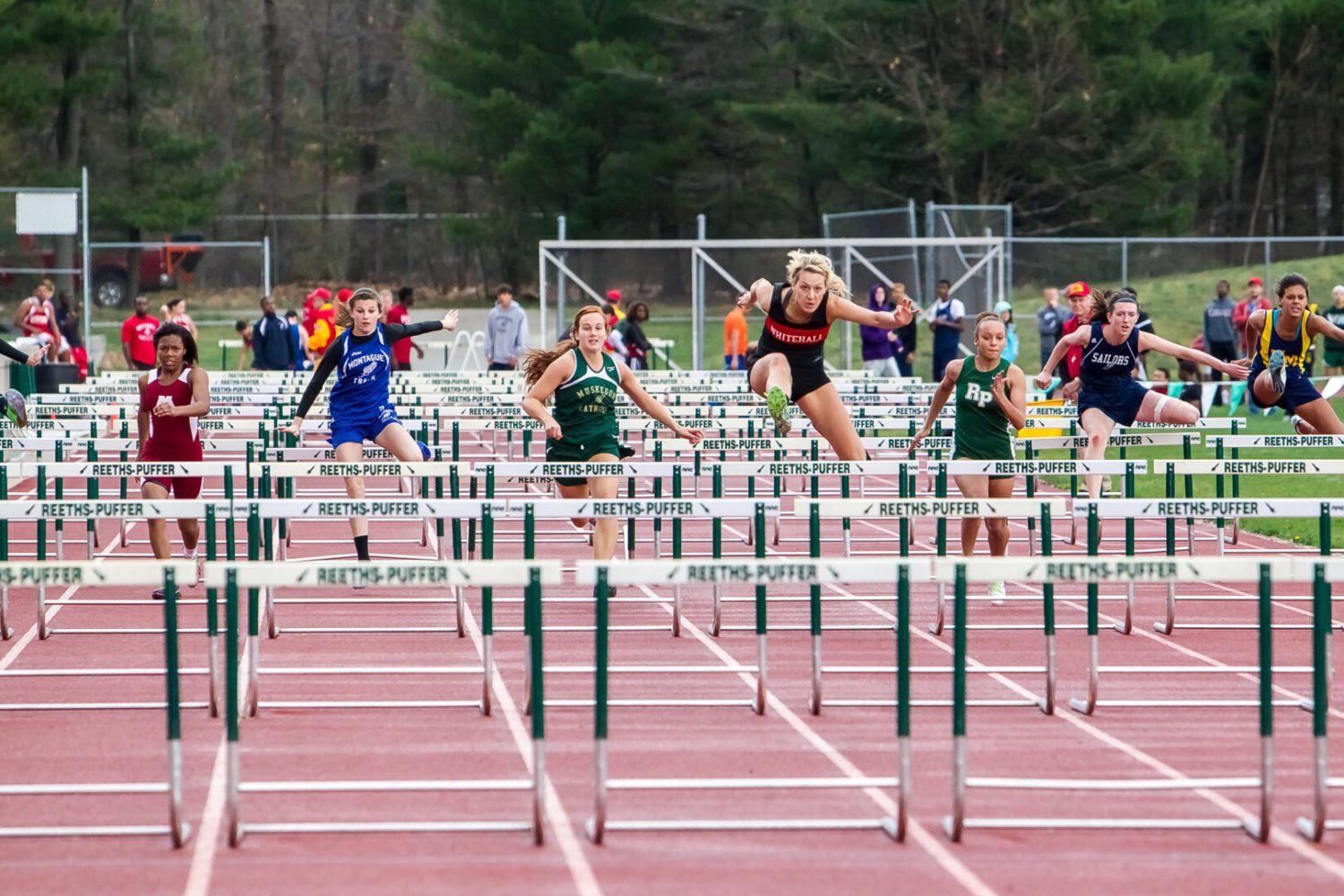