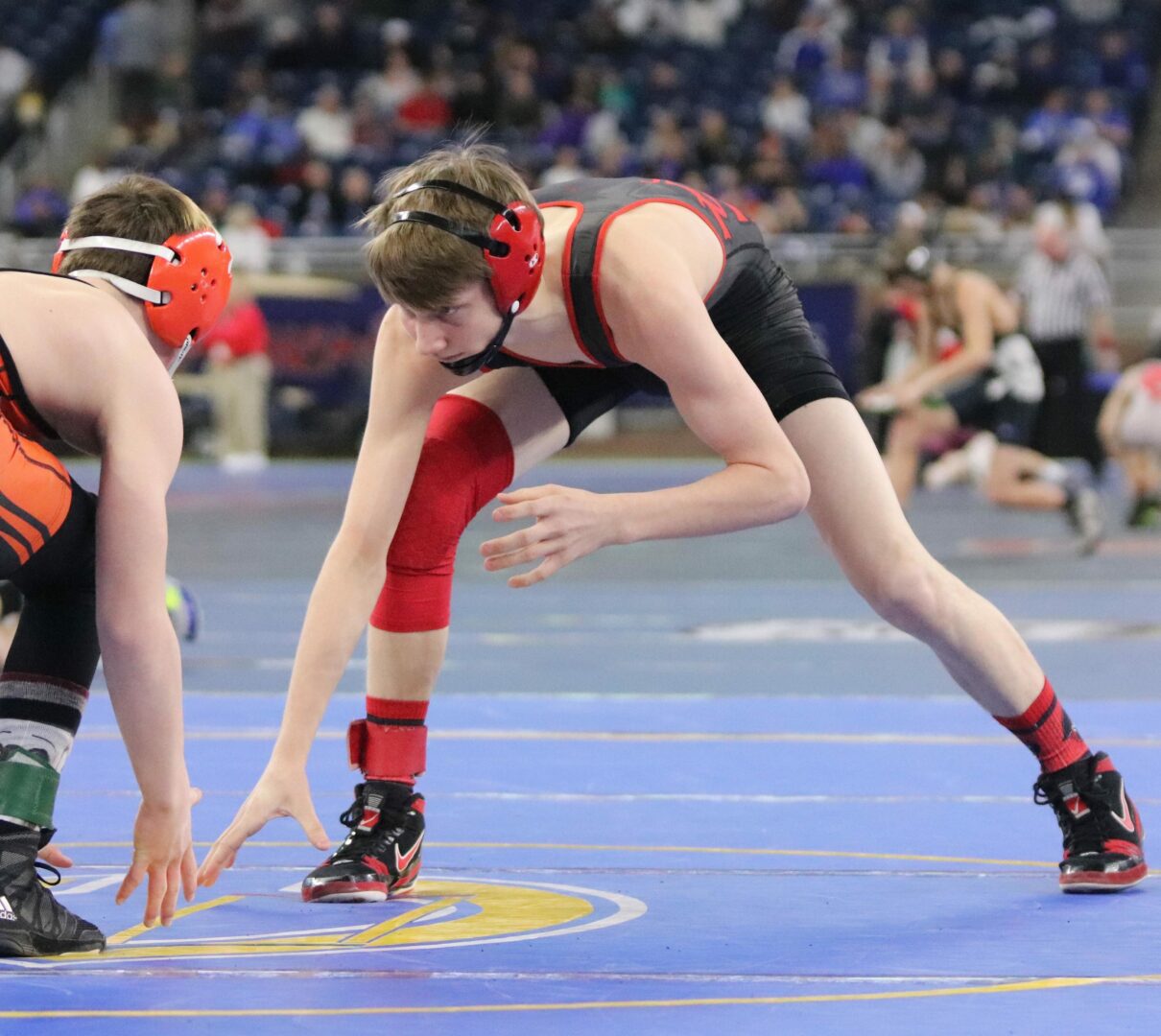 And he did it in the most dramatic fashion possible.

Altland won the Division 4 state championship in the 119-pound weight class at Detroit’s Ford Field by defeating Caden Natale of Hudson in the title match in an “ultimate tiebreaker.”

The special tiebreaker was needed because Altland and Natale were still tied after three regular two-minute periods and two overtime periods.

In the tiebreaker, Natale got to choose between starting on the top or bottom because he scored the first point in the match. Natale chose to be on top, and if  he stayed there for 30 seconds, he’d win the state title, but if Altland escaped at any point, he would win.

Altland ended up escaping Natale’s grasp and winning the championship, which his father, Hart wrestling Coach Brad Altland, was confident he would do.

“When they chose to put Robbie down I was happy,” Brad Altland said. “I wasn’t 100 percent sure, but I thought he’d get out just by watching him over the years, and the way the match was going. I was probably about 80 percent sure we were going to get out of that, because mindset is a huge part of it.”

For Altland, the state championship was a just reward for all the hard work he’s put in as a four-year state qualifier.

He finished seventh in the state finals as a freshman, third as a sophomore, and second as a junior.

“It’s been my journey since I was young,” Altland said. “It means everything to me because it’s what I’ve worked for my entire life.

“Wrestling has been my main sport and main thing since I was six or seven. I practice two or three times a week in the offseason and this whole experience is kind of motivational for me, because I know that I can do anything as long as I put in the work.”

Altland won four matches over the two-day state tournament to claim the championship. He pinned Travis O’Neil of Newberry in his first match in just 34 seconds. He beat Dylan Amm of Lawton 8-2, and then defeated Drew Gebhardt of Manchester 11-0 in the semifinal match.

While Robbie is happy to be a state champion, he knows that it’s more than just a personal accomplishment.

“I guess the majority of it is for my teammates and coaches,” he said. “They’ve put so much into me, and even if I wouldn’t have won it, I’d still feel pretty accomplished. But I needed them to get over that hurdle.”

Brad Altland said there couldn’t have been a better way for his son to close out his season and varsity career.

“It would be hard to write a story like that,” he said. “He’s a four-time All-Stater and achieved 200 wins, before winning a state title in his last match. He’s a pretty fortunate kid to accomplish what he did.

“It’s pretty impressive, and I’m extremely happy for him. He spent a lot of time getting where he was at, and it’s good to see it work out, because a lot of times it doesn’t.”

The following is a list of other area wrestlers who placed at the state finals and won All-State honors: