By Jim Moyes
Special to LocalSportsJournal.com

Although readers of LocalSportsJournal.com may find it difficult to believe that spring is near, One sure sign that balmier days lie ahead is the beginning of one of my favorite sports traditions – the state high school basketball tournament.

Last week marked an earlier start to the tournament, which traditionally began in early March, but even though mother nature is still playing a cool trick outside, local gymnasiums hosting the games will surely be hot with excitement.

I first became hooked as a fanatical follower of the MHSAA tournament more than 70 years ago, when I followed my uncle’s team all the way to the state championship game back in 1947. 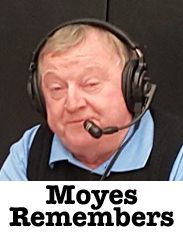 When my uncle’s Haslett High squad lost in the state Class D finals to Baroda, it began a tradition of making many a trip to these championships that only ended when I moved to the Sunshine State just a few years back.

We always have high hopes that our high school teams can make a long run and ultimately find their way to the state finals in East Lansing, but that surely was not the case during my childhood days at North Muskegon High School.

I had to follow other local teams as they advanced in the tournament, because my beloved Norseman went a full decade during my school years before they won even one tournament game.

The districts began at a number of area sites last week, but there is no question about my favorite tournament venue during my radio broadcasting days.

How I loved those doubleheaders, and even tripleheaders, that were contested at the spacious L.C. Walker Arena from the early 1960’s into the 1980s.

Crowds that often topped out at better than 5,000 fans would witness some epic battles at “The Walkaaa.”

Those Muskegon Heights-Muskegon boys matchups were always hotly contested, beginning with the first Class A tournament classic back in 1960. The Big Reds of Sam Moore, Dave Nelson and company upset the No. 1 state ranked Tigers to capture the inaugural tournament at the brand new arena.

The Tigers, featuring a towering front line of John Sanders, Paul Adams, and John Calloway, did bounce back the following year, when they made it all the way to the Class A state championship game, before falling to Detroit Catholic Central in the first state MHSAA championships that were televised statewide.

Those Muskegon-Grand Haven district championship games at the Walker were also memorable affairs.

I’ll not soon forget the 1985 Reeths-Puffer boys team, led by Mark Hughes, the future captain of the 1989 University of Michigan NCAA champions. The Rockets captured the district title at the L.C. Walker that would begin their longest run in school history, which ended in the semifinals at Crisler Arena in Ann Arbor.

My first fond memories of a local team making its way to a state title game go back to 1953, when Muskegon St. Mary and Muskegon St.Joseph both played in the championship game.

I was glued to the radio for both games. At first came a disappointment after St. Mary’s lost in its Class C title game. But I was thrilled when St. Joseph upset Detroit All Saints in Class D to win the first state championship for a Muskegon area team since World War II.

If one is a basketball junky, like this “‘ole announcer,” then one has to be thrilled with the present three-day format in the state finals.

One can take in a combined 12 semifinal games and four state final games over a three-day span, all at the 14,000-plus capacity Breslin Student Events Center at Michigan State University.

For a number of years, MSU’s old Jenson Fieldhouse hosted the semifinal games, but was limited to Class A and B games.  The Class C and D semis were scattered all over the Capitol City area, ranging from the Lansing Civic Center, Lansing Vocational School, and even the MSU IM building.

In the 1940s, there were also a few games that were played in an upstairs practice gymnasium at Jenison Fieldhouse, and not on the main arena floor.

There were a couple of occasions when me and my longtime radio partner, the late Gene Young, would broadcast an afternoon Class B game in Ann Arbor and then hurry back to East Lansing to broadcast a Western Michigan Christian Class D semifinal contest.

Thankfully, those mixed sites are a thing of the past.

Since my move to Florida nearly a decade ago, I have not attended any state tournament games in person, but I have stayed attentive as our local teams’ progress, through LocalSportsJournal.com, phone conversations with buddies still sequestered in the Port City, and of course, through the modern marvel of social media.

And when these great tournaments come to an end in a few weeks, maybe the snow will have finally melted and hopefully your favorite team has brought home a trophy. Good luck to all!