LSJ Gridiron Picks Week 1: Which writer will win the opening round for his “team?”

We love this time of year, when the greatest of all sports – high school football – played in Michigan’s prep f

Of course LocalSportsJournal.com will again be on hand with coverage of all the games this fall, starting Thursday and Friday when things get rolling with a big slate of matchups.

But this year we’re a little more excited than usual, because our annual LSJ Gridiron Picks involve more serious competition. The eight LSJ writers are not just competing against each other for bragging rights, as they did in the past. They are competing on behalf of everyone on their “teams.”

For the last few weeks, local prep football fans have been signing up for our new “Harbor Cinema/LSJ Gridiron Picks Contest.”

Contestants had to choose one of the eight LSJ writers who predict football winners. Those who chose the writer with the best win-loss record this week will go into a drawing for a free dinner at a local restaurant. The same will be true for Weeks 2-9 of the season.

Those who chose the writer who ends up with the best overall record at the end of the season will be in a drawing for the grand prize – a year’s worth of free movie passes at the Harbor Cinema (the former Plaza Theater) on Henry Street in Norton Shores.

So we will see which writer has the best record in Week 1, and we will draw from the contestants on his “team” this weekend to see who gets the free dinner. The winner will be announced early next week.

In the meantime, there are a bunch of good opening games to enjoy on Thursday and Friday night, including East Kentwood at Mona Shores, Reeths-Puffer at Grand Haven, Spring Lake at Orchard View and Reed City at Montague.

Perhaps the best matchup in the state, Muskegon vs. Warren De La Salle, will be played at the other end of I-96 at Wayne State University.

There is also a lot of good variety in the Week 1 picks, because at least a few writers disagree about quite a few games. Who are you picking? 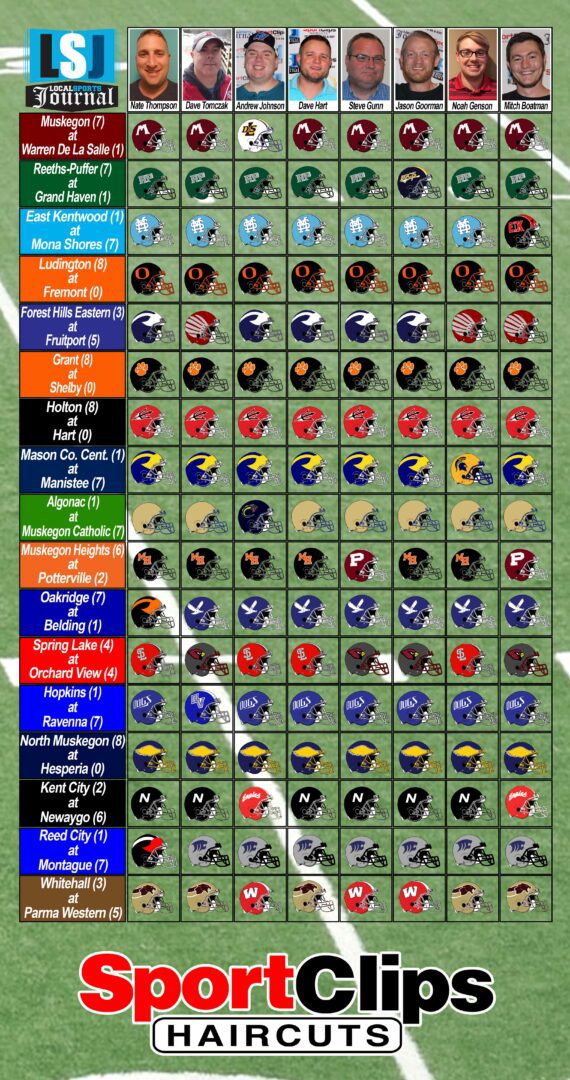