NORTH MUSKEGON – While many in attendance were expecting an offensive shootout between Ravenna and North Muskegon Friday night, it was the defenses that came to play.

In a classic, physical West Michigan Conference bout, the Bulldogs edged the Norse 14-13 to claim their first win of the season.

The winning score came with 6:34 left to play on a 3-yard touchdown run by Ravenna quarterback Connor Kilbourne. The senior started running inside before bouncing outside and going untouched for the score.

“It felt amazing,” he said of the go-ahead play. “It was supposed to be a run up the middle, actually. I saw room on the outside, our receivers did a great job blocking, and I pretty much walked in.”

Ravenna head coach Doug Samuels, whose team improved to 1-1, said he was proud of the team’s response to adversity, with three starters out and penalties hurting the team. 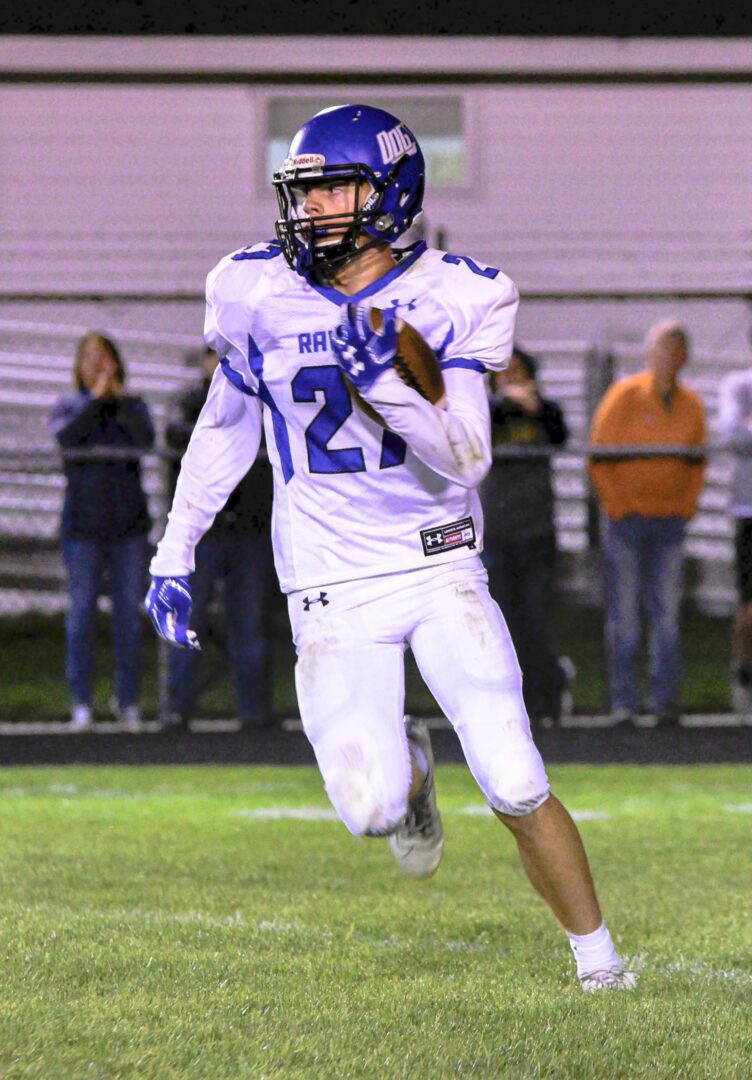 Thomas McCullough on the rush for Ravenna. Photo/Mitchel Dixon

“We had the chips stacked against us a number of times,” Samuels said. “Our guys just found a way to win, we kept battling. We had some key guys down.”

After the tough loss, North Muskegon coach Larry Witham said he liked the effort from his team.

“The kids played really hard on both sides of the ball,” he said. “Our kids played hard, we just came up one short. We certainly were expecting a very hard fought game. That’s a good high school football game that people saw tonight.”

Neither team scored in the first quarter, with North Muskegon dominating the time of possession. Ravenna ran just three plays in the opening quarter and the Norse held the ball for the final 8:15 of the quarter.

The Norse scored on the second play of the second quarter on a 6-yard touchdown run by Colin Schotts. The extra point put North Muskegon up 7-0 with 11:05 until halftime.

Ravenna broke into the scoring column with 1:29 to play in the first half on a 3-yard run by Grant Parker. The Bulldogs used some trickery to tack on two more points when holder Thomas McCullough took the snap, spun to his left and dove over the right pylon to make it 8-7 heading into the half.

The third quarter saw a lot of penalties and discussions by referees, but no points. The Norse were driving to open the fourth, and appeared to turn the ball over on downs at the Ravenna 31-yard-line. 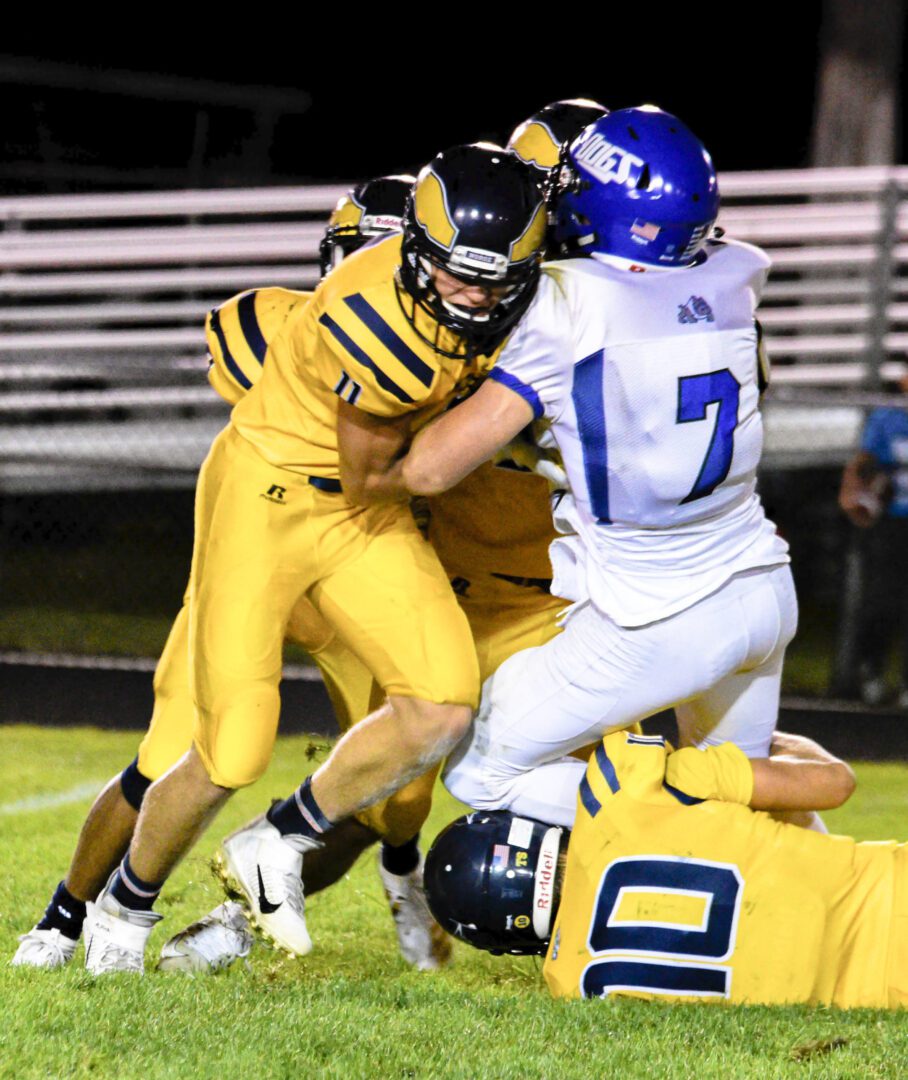 However, a facemask penalty was called on Ravenna, granting North Muskegon a first down. Samuels then threw his headset in frustration, resulting in another penalty. Tack on an offside call prior to the ensuing snap, and the Norse went from turnover to first and goal at the 4-yard-line with no time taken off the clock.

Two plays later, Schotts scored from two yards out to put North Muskegon up 13-8 with 10:15 to play. A two-point conversion catch was ruled incomplete when the Norse receiver came down out of bounds.

On the next possession, Ravenna marched downfield, converting a pair of critical third downs, leading to Kilbourne’s go-ahead score. A two-point conversion after the final touchdown failed, but as it turned out the Bulldogs didn’t need the points.

North Muskegon went three-and-out on its next drive, but forced a punt and took over at its own 25-yard-line with 57 seconds left. The Norse advanced into Bulldog territory with five seconds left, but a Hail Mary pass attempt fell incomplete to end the game.

Kilbourne was 6-for-11 for 62 yards in the air and ran for 30 yards for Ravenna. Tristan Witt led the Bulldogs’ rushing attack with 49 yards after replacing injured Dalton Hogan. Calvin Schullo was the leading receiver with three catches for 43 yards. Ravenna was without All-State wideout Josh Cox, who was injured.

“Those guys were disruptive and created problems for the quarterback,” he said.

Whitehall wrestling team back in the Division 3 state Final 8, with bigger goals in mind