MUSKEGON TOWNSHIP – The future could be pretty bright for the Orchard View football team, which has a lot of underclassmen who

spent this season learning the ropes at the varsity level.

But the Cardinals have a lot of work to do before they can hope to have a team like last year’s, when they went 9-0 and won a conference title. 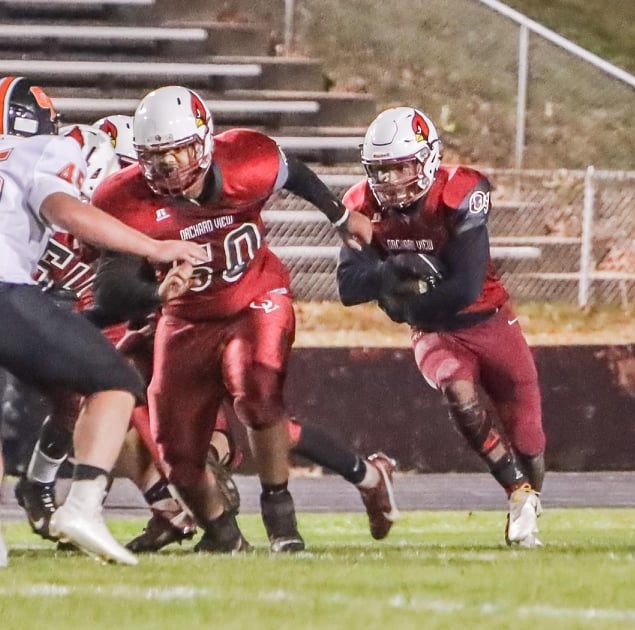 That was obvious on Friday when OV fell 49-16 to Grant in a first-round Division 5 playoff game. The Cardinals, who upset Kent City last week to earn the home field advantage, finished the season with a 2-5 record.

“They are a really good football team and they outplayed us today,” said OV coach Fred Rademacher, who suited up 19 freshmen and five sophomores on Friday. “It was a rough season, but we are happy that we got some football in.

“The future looks bright, and we had a lot of freshman that played a lot of football tonight. We are just going to keep working and see what happens. These freshmen don’t play or practice like freshmen.”

The Tigers opened the scoring on their second play from scrimmage on a four-yard touchdown run by quarterback Brendan Keelean.

OV quickly responded on the ensuing kickoff when speedster Darius Williams broke loose for an 80-yard kick return TD. Brendan Hyatt added a two-point conversion on a run to give the Cardinals an 8-7 advantage.

Grant scored two possessions later on a five-yard run by Keelean to give the Tigers a 14-8 lead late in the first quarter.

The Tigers outscored Orchard View 20-0 during the second quarter to take a 34-8 halftime lead. 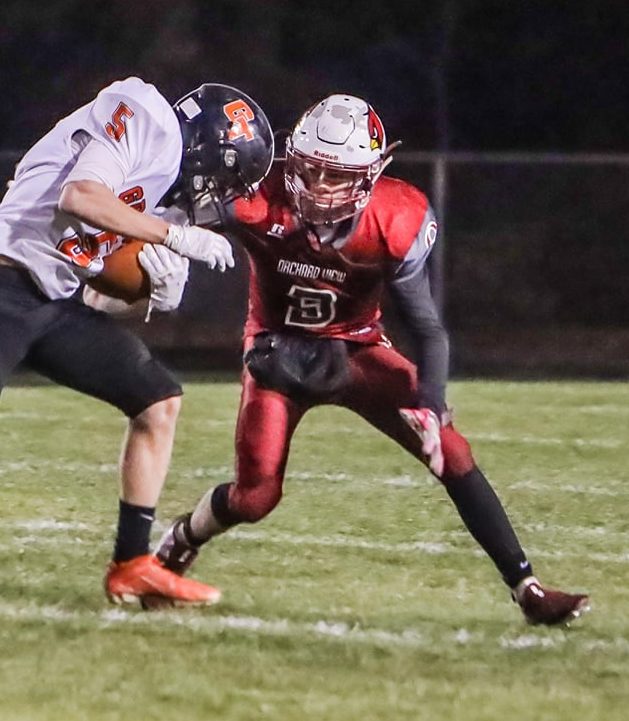 Tramon Spight gets ready to make a tackle for Orchard View. Photo/Joe Lane

Orion Evans scored twice in the second quarter (3- and 7-yard runs), while Keelean added his third touchdown of the contest (a 6-yard run).

Grant added another touchdown in the third quarter on a five-yard run by Trevor Lowry with 5:52 remaining to increase its advantage to 41-8.

The Cardinals responded two possessions later, scoring on a 75-yard run by Williams with 1:38 left in the third quarter to cut the deficit to 41-16.

The Tigers closed out the scoring in the fourth quarter on a five-yard touchdown run by Chase Kazemier.

Orchard View was led offensively by Williams, who ran for 110 yards on 12 carries.

“We played a lot better during the second half,” Williams said. “On the kick return I saw the play right in front of me with a lot of open grass ahead of me.”

The Tigers, who will face Howard City Tri-County next weekend in the district semifinals, were led by Lowry with 92 rushing yards on 14 carries.

Grant quarterback Keelean threw for 83 yards on 4-for-6 passing while rushing for 64 yards. Evans added 78 yards on 14 attempts.