The Vikings are in the playoffs for the fifth straight season, but it’s been seven years since they won a district championship. There also shouldn’t be any concerns with the pressure of the playoffs as several players have been down this road before.

Cadillac comes in with a four-game winning streak and an 8-2 record. The Vikings lost to Detroit Country Day, 13-0 in last year’s Division 4 state championship game, and have qualified for the playoffs each of the last three years.

Whitehall is also 8-2 on the season, but saw a six-game streak end with a 38-28 loss to Reed City in the regular-season finale. The Vikings have made the playoffs seven times out of the last eight years.

“Cadillac runs the veer in similar fashion to Army, Navy and the Air Force academies,” Whitehall coach Tony Sigmon said. “Defensively, they run a 4-3. They are very physical and return a lot of experience from last year’s team.”

What does Sigmon consider keys to the game for the Vikings? 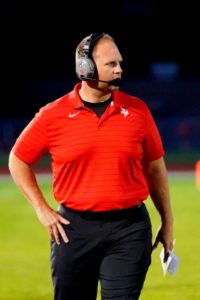 “It really starts with our defensive line of scrimmage. Our kids are going to have to win that battle of front.”(Whitehall head coach Tony Sigmon) Photo/Leo Valdez

“It really starts with our defensive line of scrimmage,” Sigmon said.. “Our kids are going to have to win that battle up front.

“Can Kyle (Stratton) build on last week’s success, and can we adjust to the style of play Cadillac likes to play? The advantage of winning on the road in the playoffs is we know we can do it.”

Whitehall rebounded from its Week 9 loss in with a convincing victory last week against Sparts in the first round. The Vikings rolled up 500 yards of offense, 383 on the ground in the 40-20 victory.

If they can come close to duplicating that effort against Cadillac, it would put Whitehall in a good position.

Whitehall only passed for 117 yards as Stratton completed 7-of-11 attempts, but two went for touchdowns.

Sigmon is not overly concerned with a road game in the post-season.

“We will have a longer trip this week,” Sigmon said. “Last week’s game was a confidence builder against an unfamiliar opponent on the road.

“We need to make sure our offense is on schedule and not falling behind the chains.”

Sigmon knows it’s taking one game at a time, and as cliché as it sounds, it’s true. That is especially true in the playoffs where it’s survive and advance.

Thursday boys hoops roundup: Whitehall gets a scare from North Muskegon before posting a 57-53 conference victory