IT TAKES A VILLAGE

It was late in the year when basketball coach Greg Gregwer suggested to his team that they take a road trip. Only a couple of weeks before, his girls squad had been abruptly eliminated from 1986 postseason play.

The Michigan High School Athletic Association girls state championship contests had started in the fall of 1973 and were in their early teenage years. Girls basketball was a fall sport back then, and for the third consecutive season, the title games were hosted at Grand Valley State University in Allendale, only about an hour away from the village of Walkerville.

Gregwer had been a sixth-grade teacher to many on his team. “He knew us pretty well,” recalled Debbie Claeys, a sophomore that season. As Debbie Bettys, she had been the leading scorer on the school’s JV team a year earlier.

“We’re watching the games and Debbie suddenly says, ‘We could play here next year,’” recalled Slowik, laughing at the memory. In 1985, as sophomore Angela Frick, Slowik had averaged 19.3 points per game for the Wildcats and had earned First Team All-West Michigan ‘D’ League honors. In 1986, she was an honorable mention all-state selection. “I was thinking, ‘Umm. Okay, Debbie, we’ll see about that.’” 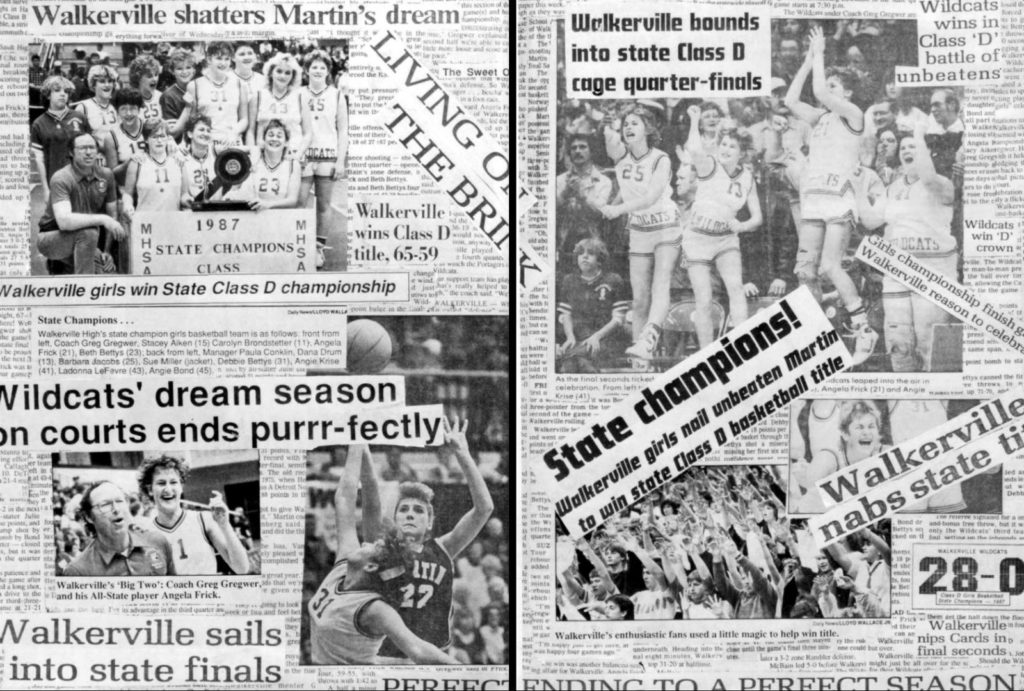 Some might call Bettys’ statement over-confidence from inexperience. “We had won the league, “It was a big deal!” she said, still able to relay the excitement of an accomplishment never previously experienced by the school’s basketball team. “Of course, it’s not unusual for a team to go watch the (championship) games. Lots of coaches do that.”

But that journey to GVSU over 30 years ago was a revelation. “It opened your eyes. You could see how good we could be,” relayed Claeys on the importance and true impact of that trip.

A 1961 graduate of Pentwater High School, and later, Aquinas College in Grand Rapids, Gregwer had been a record-setting prep basketball player before embarking on a teaching/coaching career in the late 1960s at Walkerville, located about 20 miles southeast of his hometown. Like many at small schools, over the years, Gregwer had worn many coaching hats, guiding baseball, softball, boys basketball, and girls softball. In 1984, he took on the role for both the varsity and JV girls basketball teams. He quickly recognized the size, speed, quickness and desire that were aligning across a cluster of grades at the local school. 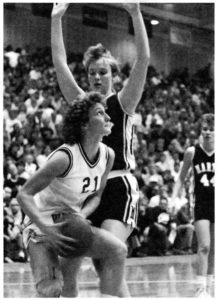 The Wildcats had finished the year with just four victories before Gregwer took the reins. Walkerville posted a 10-11 varsity mark in 1984, but the team’s record fell to 7-14 in his second year at the helm. Gregwer recognized a major issue that he planned to resolve.

“Ten of last year’s losses were by eight points or less, and we were the county’s worst free-throw shooting team,” the coach told the Oceana Herald-Journal for their annual prep preview before the 1986 season. “I’m looking to be in the double-figure win category this year.”

As hoped, the coach’s squad delivered, finishing the regular season with an impressive 15-3 record, winning the ‘D’ League title for the first time ever. The 1986 Wildcats set a school single-game scoring mark, notching 106 points early in the season. Frick scored 40 points in another contest, also a program record. A 43-39 triumph over state-ranked Saugatuck late in the year had illustrated the team’s potential to make a postseason run, however, their season ended sharply with an opening-round loss in the Class D district tournament.

The Wildcats had trailed North Muskegon 24-11 with 2:30 remaining in the opening half when Frick tore cartilage in her knee and was forced to the bench for the rest of the game. With Walkerville’s leading scorer out of action, the Norse girls quickly upped the margin to 20 points early in the third quarter. Behind the scoring of freshman point guard, Angie Bond, Bettys’ older sister, Beth, and Carolyn Brondstetter, who had been pulled up from JV for the tournament, the ‘Cats managed to cut the lead to seven with under a minute to play. But it wasn’t enough as Walkerville lost 56-43.

“It was a pleasing season but a disappointing end,” Gregwer told the Herald-Journal following the game. “I think that will carry over to next year and we’ll be gung-ho to do something in the tournaments. I’m looking forward to next season.”

The feeling was the same for the underclassmen.

“It wasn’t even a question that I was coming back for my senior year,” said Slowik, recalling her injury and the unsatisfactory conclusion. “I did every one of those exercises they give you to make sure.” 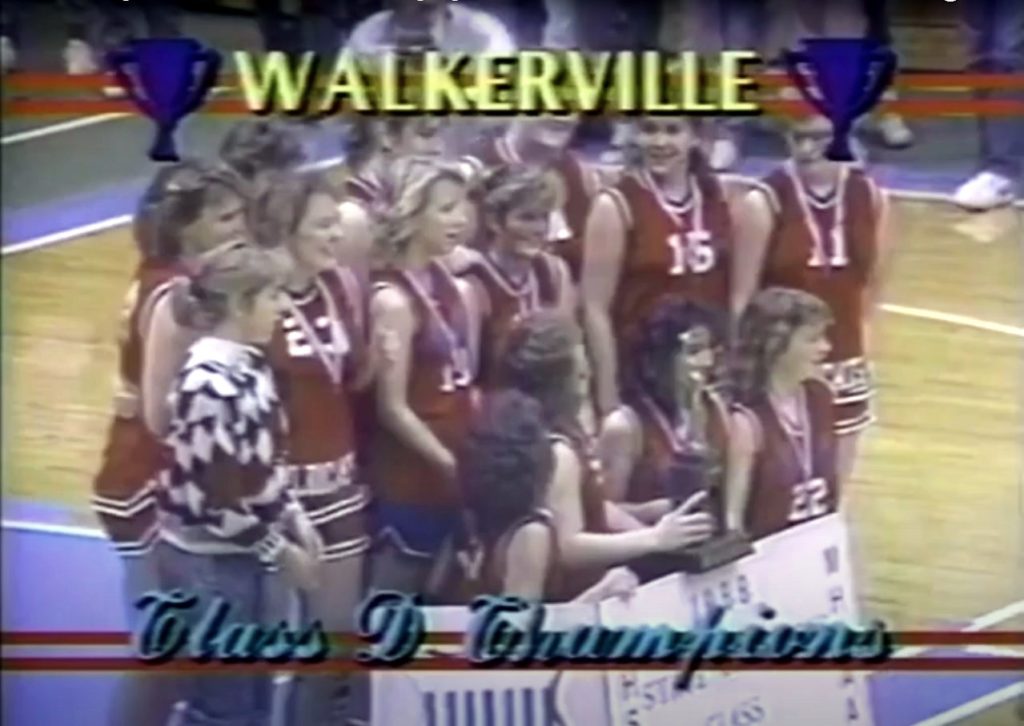 The 1987 season was, in a word, flawless. The Wildcats roared through the regular season, posting a perfect 20-0 record, outscoring their opponents by an average of more than 31 points per contest. In the team’s 19th game of the year, an 80-43 win over Freesoil, Frick grabbed 24 rebounds and dropped 44 points, both new school records.

“It just happened that she had one of those nice games where it all fell into place,” Gregwer told the Detroit Free Press. “Of her 19 baskets, 11 were from rebounding.”

In the three-game district tournament, the average margin increased to 35, partially due to overwhelming North Muskegon 88-34 in the postseason opener.

McBain and Onekama were dispatched in the regional round, however, the ride nearly ended at Wexford Civic Center in Cadillac against the Johannesburg-Lewiston Cardinals in the quarterfinals. Pressed and pressured, Walkerville saw a 49-34 late third quarter lead disintegrate. With 43 seconds remaining in the contest, the Cards were up by a point, 72-71.

“We had two fouls to give,” said Gregwer at the time. Walkerville needed to use them both. Following the first foul, Bond stepped in front of the Cardinals’ inbounds pass, stole the ball, then fed Frick, who was streaking down court for an easy lay-up and a 73-72 Wildcat lead. A second theft by the sophomore, this one with 12 seconds left, sealed the Walkerville win. Frick, the senior, poured in 38 points and grabbed 14 rebounds on the night, tops in both categories.

She added 28 points in the semifinals against DeTour, then 33 points in the team’s 65-59 title win over No. 1-ranked Martin. The total of 99 points scored over the final three rounds of tournament play remains an MHSAA record, matched by Peggy Evans of Detroit Country Day in 1989, but still not exceeded over 30 years later. The 5-foot-10 Frick was named to Associated Press 1st team Class D All-State at season’s end.

“The celebrating of Walkerville’s first-ever state championship may never end,” sang the Herald-Journal. “It started Saturday afternoon with a long parade of cars and buses from Allendale through Shelby and Hart and out to an escorted welcoming home at Walkerville. The team was further saluted Saturday evening between the two boys basketball games at Walkerville, and the accolades are still coming.”

With the graduation of Frick, the arrival of a new season, a loss by the Wildcats in their 1988 season opener against non-conference opponent, Kent City, and a second defeat – this one to league rival Mason County Eastern in late September – statewide media quickly lost sight of the little Oceana County town.

Even Debbie Bettys, now a senior, had her doubts. “After that (first loss),” she’d tell the Free Press at the end of the year, “I thought ‘This is going to be a long season.’”

“It just took a while to find our own identity,” said Claeys explaining her statement years later. “Then we were good to go.”

“That was tough,” said Angie Patton, recalling her junior year when she was known as Angie Bond. “Debbie picked it up a lot. Everyone stepped it up.”

As it turned out, those setbacks were the only blemishes on the regular-season slate. Still, they were enough to keep the team out of the media’s weekly rankings. Gregwer latched on to the snub and used the lack of notice as a motivational tool.

“That inspired me,” said Patton. “Scoring didn’t motivate me. I worked hard and wanted to show other teams that we were real; that we weren’t just some little hick town.”

Led by Bettys, who midway through the season joined Frick as the second in school history to notch over 1,000 points in her playing career, and Bond, the team again dominated opponents. In the rematch with unbeaten Mason County Eastern, ranked eighth in the polls, Walkerville forced turnovers and out-rebounded the Cardinals, 33-24, earning a hard-fought victory, 60-50. The team’s split the league crown.

Again, the Wildcats cruised through district tournament play, advancing to a third showdown with Eastern in the regionals. This time, Walkerville left no doubts.

“Bettys and Bond. They had 27 of Walkerville’s 32 points in the first half,” said Eastern coach Kristy Stark. “Debby was getting the baseline and driving it, or getting the rebound and putting it back up.” Bettys finished with 26 points and 16 rebounds, as the Wildcats grabbed a 51-31 advantage off the boards against the taller Cardinals.

“Walkerville’s good. I have no idea why they’re not ranked,” added Stark. “They should be in the Top 10 – especially with their reputation from last year.”

But as in ‘87, things nearly ended at Wexford in Cadillac, this time in the quarterfinal round against Maple City Glen Lake.

At a height disadvantage, Glen Lake relied on a game-long pressure defense, and it created problems for the Wildcats, taking them out of their offense.

“We just didn’t execute well because of the intensity of their defense,” said Gregwer to the Daily News.

Bond – an excellent three-point shooter and Walkerville’s quarterback – had fouled out for the first time in her career, with 2:33 remaining to play. Bettys had poured in 31 points, including 12 of the team’s 17 points in the fourth quarter, but the Wildcats saw a five-point margin disappear twice. With 19 seconds to play, the teams were knotted at 57-57 as Wildcat freshman, Missy Jacobs stepped to the line. She hit the first free throw of a one-and-one opportunity. But the second didn’t fall.

“After Jacobs’ second free throw missed the mark and bounced off the rim, Glen Lake rebounded the ball and had two more shots to win the game,” wrote Don Vanderveen for the Muskegon Chronicle, “but missed them both.”

“They had a player that hasn’t played much step up to the foul line, and I felt good about that. But then she canned it,” said Maple City coach Ted Swierad about the 58-57 defeat. “Let’s hand it to those girls from Walkerville. I can’t understand why they’re not rated.”

Bettys and Bond were held in check in the semifinal by Carney-Nedeau. Stacy Aiken stepped in, leading fast breaks to take scoring honors with 22 points as the Wildcats again advanced to the Class D championship game, this time downing the Wolves, 60-54.

A crowd of 3,500 had packed the gym at GVSU, with Red for the Wildcats and Green for the Shamrocks scattered everywhere.

“The better part of Walkerville’s student body, decked out entirely in red and white – including quite a number of painted faces – turned out to cheer on their classmates,” noted the Herald-Journal. Today, brief highlights from the title game can be found on YouTube.

“We were very fortunate,” said Slowik, thinking back. “It never gets old … you were playing for the community.”

“Starters and non-starters, all the supporting cast contributed,” added Patton. “No one cared who scored. Everyone had a role.” 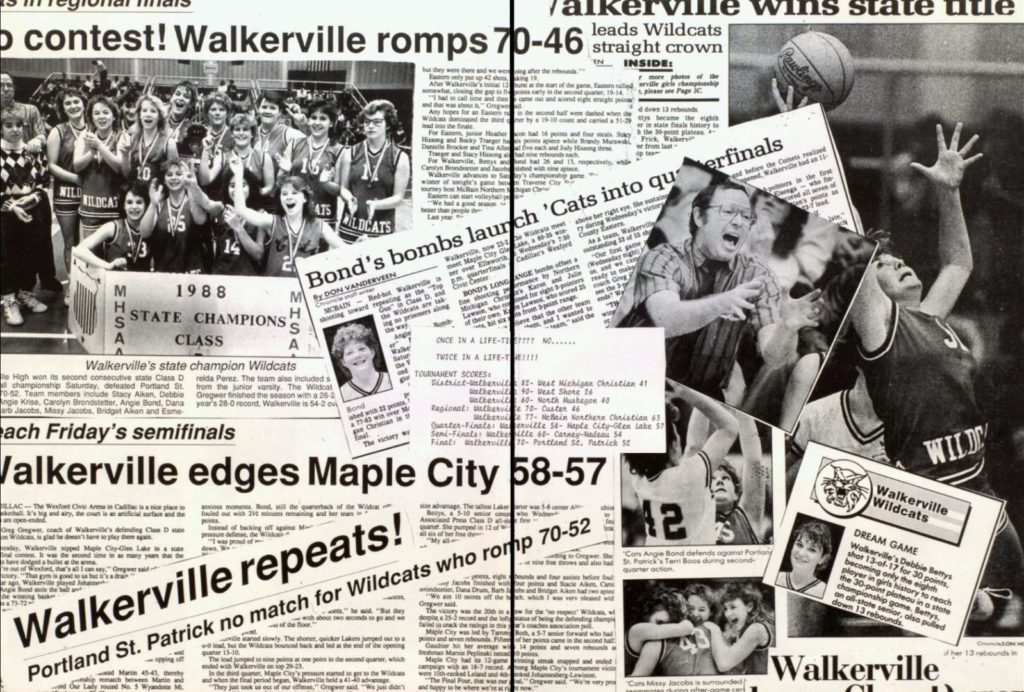 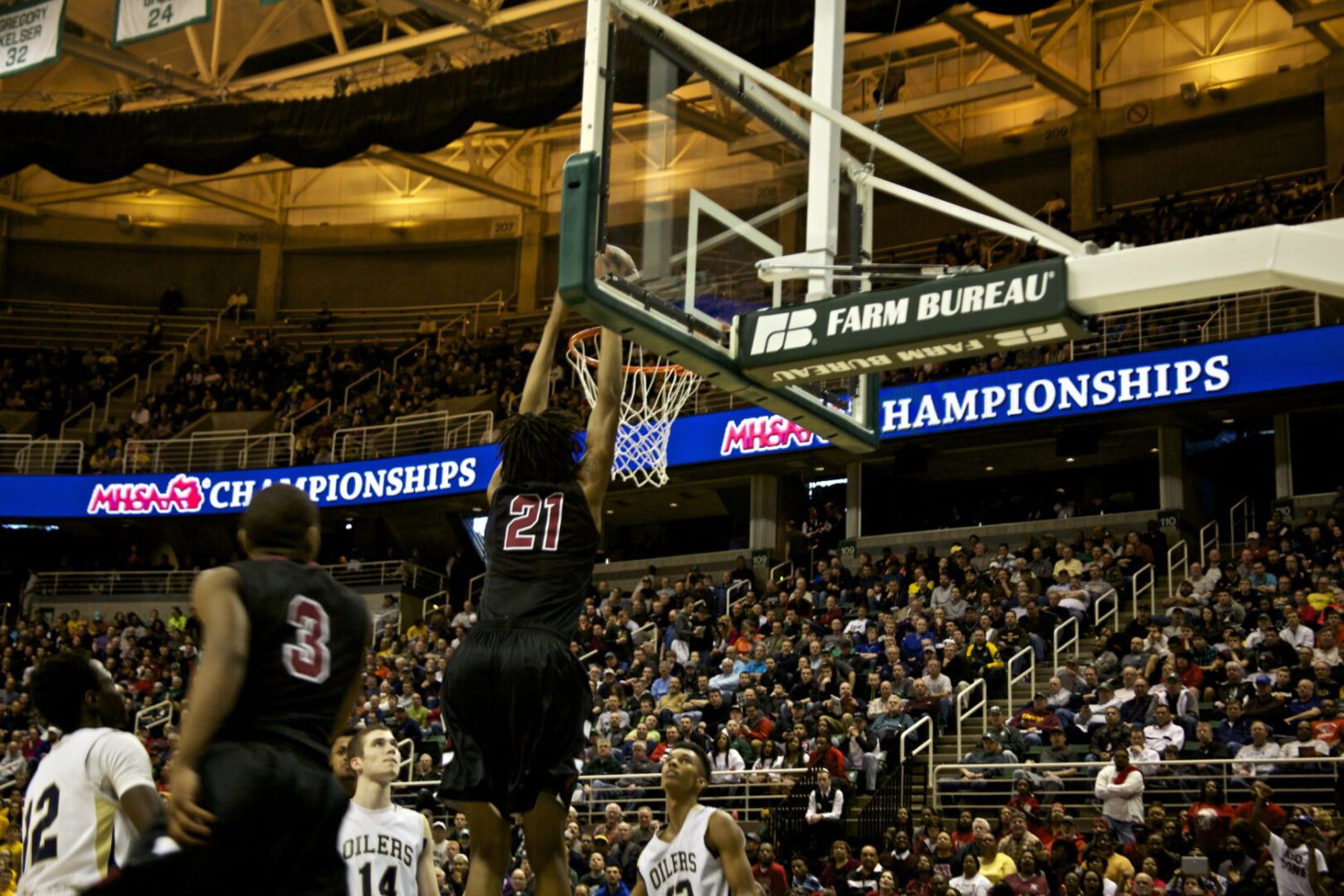