But a 14-0 spurt by the Red Devils opened up the fourth quarter to a 58-46 non-conference girls basketball win by Holton.

The visiting Tigers jumped out to a 18-15 lead after the first eight minutes of play. Davis and Robins didn’t disappoint any of the fans as they both led their respective teams with 10 first quarter points. Davis connected on three 3-point shots in the quarter.

The offensive pace slowed down in the second as the Red Devils outscored Heights 10-6 to take a slim, one point 25-24 halftime lead. Holton senior Gianna Reed scored five points in the quarter, while Davis and Robins netted four points each for their teams.

Holton opened up the final eight minutes of play going on a 14-0 run to take a commanding 52-38 lead before Davis would hit a 3-point shot at the 3:25 mark for the Tigers. She would score all eight fourth quarter points for Heights, meanwhile the Red Devils tallied 20 points in the final frame.

“It was good to close out a game even though we made a lot of errors,” reflected Holton head coach BJ Jordan.

Jordan talked about the matchup between Davis and Robins.

“We scouted her (Davis) earlier in the week. She is a great offensive weapon and a good shooter….thirty four points, wow,” said Jordan.

“She’s the cornerstone of our offense. Stat wise this was her best game of the year. We kind go as she goes from an offensive standpoint,” Jordan said. 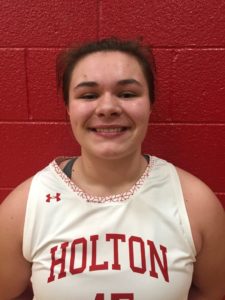 Robins was the lone Red Devil in double figures. Senior Alanna Cregg chipped in with 9 points.

Other then Davis no other Tiger reached double digits.

Holton improves to 4-2 overall and 1-1 in the CSAA-Silver. They will host conference foe Hesperia on Friday evening.

Muskegon Heights falls to 1-4 overall and 1-1 in the Lakes 8 Activities Conference. The Tigers will travel to Ludington on Friday evening to take on the Orioles.