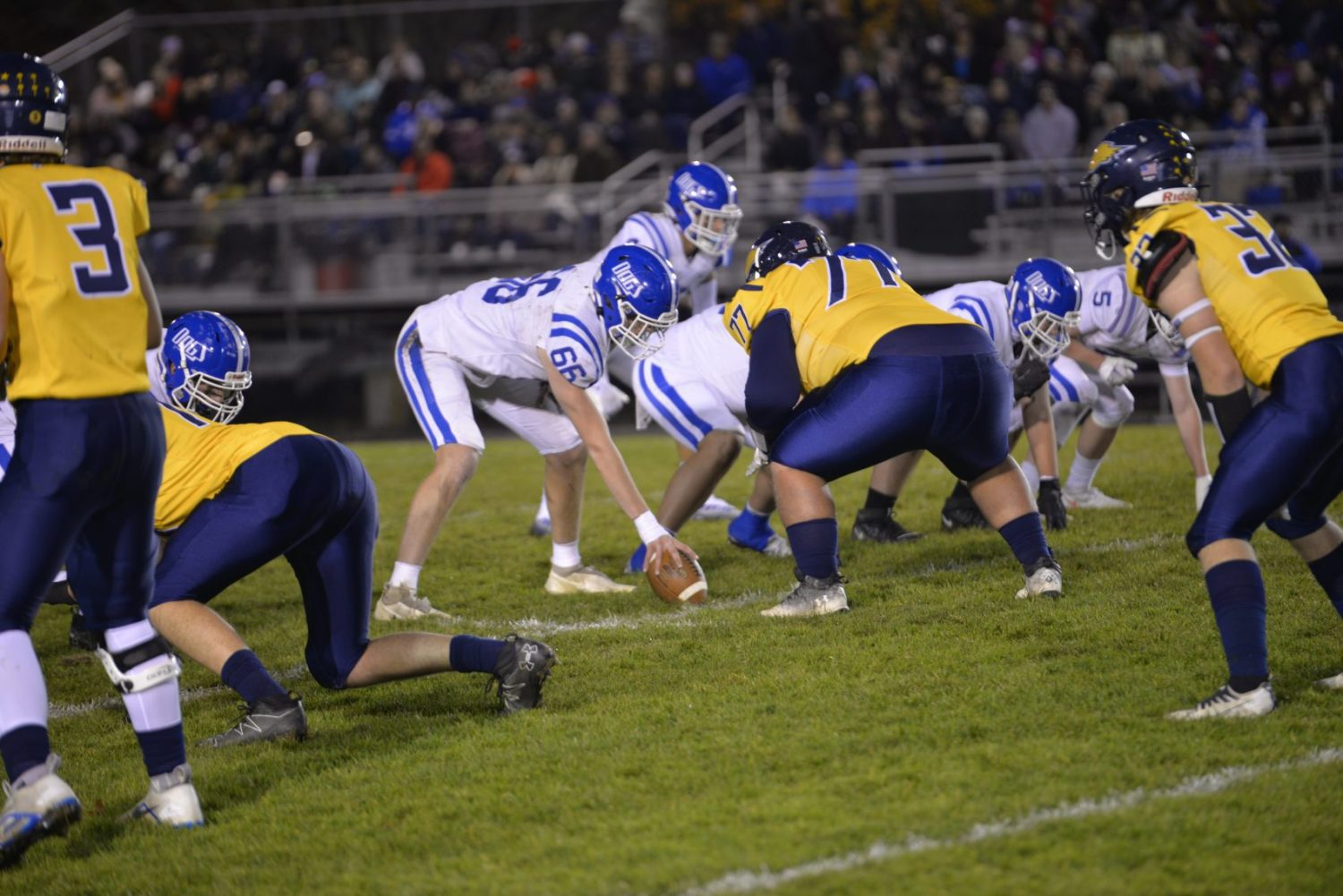 NORTH MUSKEGON–North Muskegon had everything in its favor on Friday night – the momentum of an eight-game winning streak, home-field advantage and perfect weather conditions for its passing offense.

But Ravenna had Hunter Hogan.

Inspired by Hogan’s super-human effort on offense, defense and special teams, the Bulldogs dug deep and pulled out a dramatic 10-7 victory to stun the hosts in the Division 7 pre-district game at Fred Jacks Field.

“I was just out there running around and playing like when I was a little kid,” explained Hogan, who rushed 29 times for 123 yards and a touchdown and completed 6-of-12 passes for 90 yards.

“We were underdogs, so we had nothing to lose and we could play loose. We were confident in ourselves.”

Ravenna (7-3), avenged a 28-7 loss to North Muskegon on Oct. 7 and advanced to next week’s district final against the winner of Saturday’s Lake City at Ithaca game.

North Muskegon (8-2) saw its winning streak and breakthrough season end in heartbreaking fashion, repeatedly driving deep into Ravenna territory late in the third quarter and the fourth quarter, only to come up empty-handed each time.

The Norse kept fighting and were not defeated until James Young’s fourth-down pass was intercepted by Caleb Forsythe with less than 30 seconds remaining.

“We challenged some of our defensive backs to disrupt their receivers and not just let them run free,” said third-year Ravenna coach Justin Ego, whose team knocked off NM in the playoffs for the second-straight year. “Our whole goal was not to let them get comfortable on offense and keep them out of rhythm.”

The plan worked to perfection, as a 12-yard run by junior Ben Meyers in the second quarter was the only points the Norse could muster – after averaging 40 points per game during the regular season.

Ravenna didn’t have much more offense. The Bulldogs scored first on a 30-yard run by Hogan in the first quarter, then Hogan’s 23-yard field goal with 1:08 remaining in the first half proved to be the game-winner.

No points were scored after halftime, but it was far from a boring second half.

Perhaps the most telling statistic of all was fourth-down conversions, as North Muskegon was 0-for-4 on fourth down, many times deep in Bulldogs’ territory, while Ravenna was 2-for-3 when the Norsemen were desperately trying to get them off the field.

One of those amazing 4th-down conversions came with 4:15 remaining, when Hogan appeared to be sacked by two NM defenders, but somehow broke away, kept his balance and fired a pass to Drew Mabrito for the first down on a 4th-and-10 play.

Hogan, who Ego describes as a “Swiss Army knife” for his ability to do a little bit of everything, is not just everywhere on the football field. He will graduate next year with 15 varsity letters – four in soccer, three each in football, basketball and track and two in baseball.

NM did get a stop on the next fourth down, when senior linebacker Kyle Huff batted down a Hogan pass – giving his team one final chance, with the ball at its own 13-yard line and 2:03 to play.

Young, who finished 9-of-18 through the air for 101 yards, connected with Talan Thompson for a big gain out to near midfield. But on fourth down, Young stepped up and threw toward his favorite target, fellow sophomore TJ Byard, but his pass was deflected and intercepted by Forsythe.

Ravenna, which had five turnovers in the loss to NM earlier in the month, had zero turnovers this time. NM finished with two turnovers, on interceptions by Chase Thomas and Forsythe,

The Bulldogs outgunned the hosts by a slight margin in both total yards (223-209) and rushing yards (133-108). Thomas finished with three receptions for 48 yards.

“Honestly, I thought our offensive line won the game for us,” said Ego, who was an assistant coach at Muskegon High for 11 years before taking the Ravenna job. “Those guys did just enough for Hogan. I told them before the game that it doesn’t have to be a 40-yard run; a 4-yard run is a good play.”

Hogan and his cousin, sophomore Derek Finlay, each made eight tackles. Defensive end Carter Schullo played a monster game with eight stops and Brayden Fry and Thomas each had four tackles.

Meyers led the Norse with 17 carries for 83 yards and Carsen Moat caught two passes for 44 yards.

Drew Bartos, a sophomore inside linebacker, was a force for NM with nine tackles, including three for loss. Sam Gallo made six tackles and AJ Larkin and Huff each had five stops. 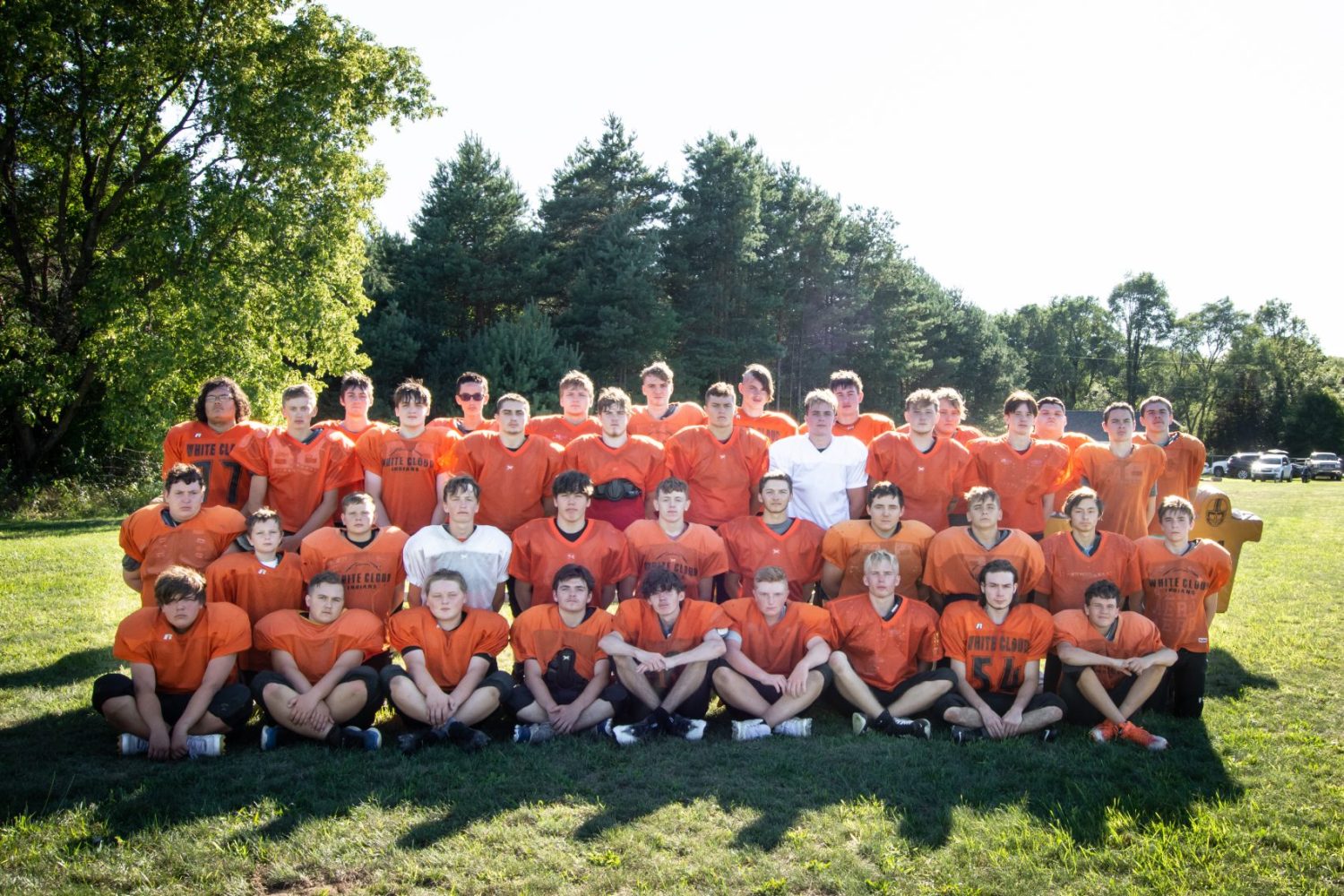