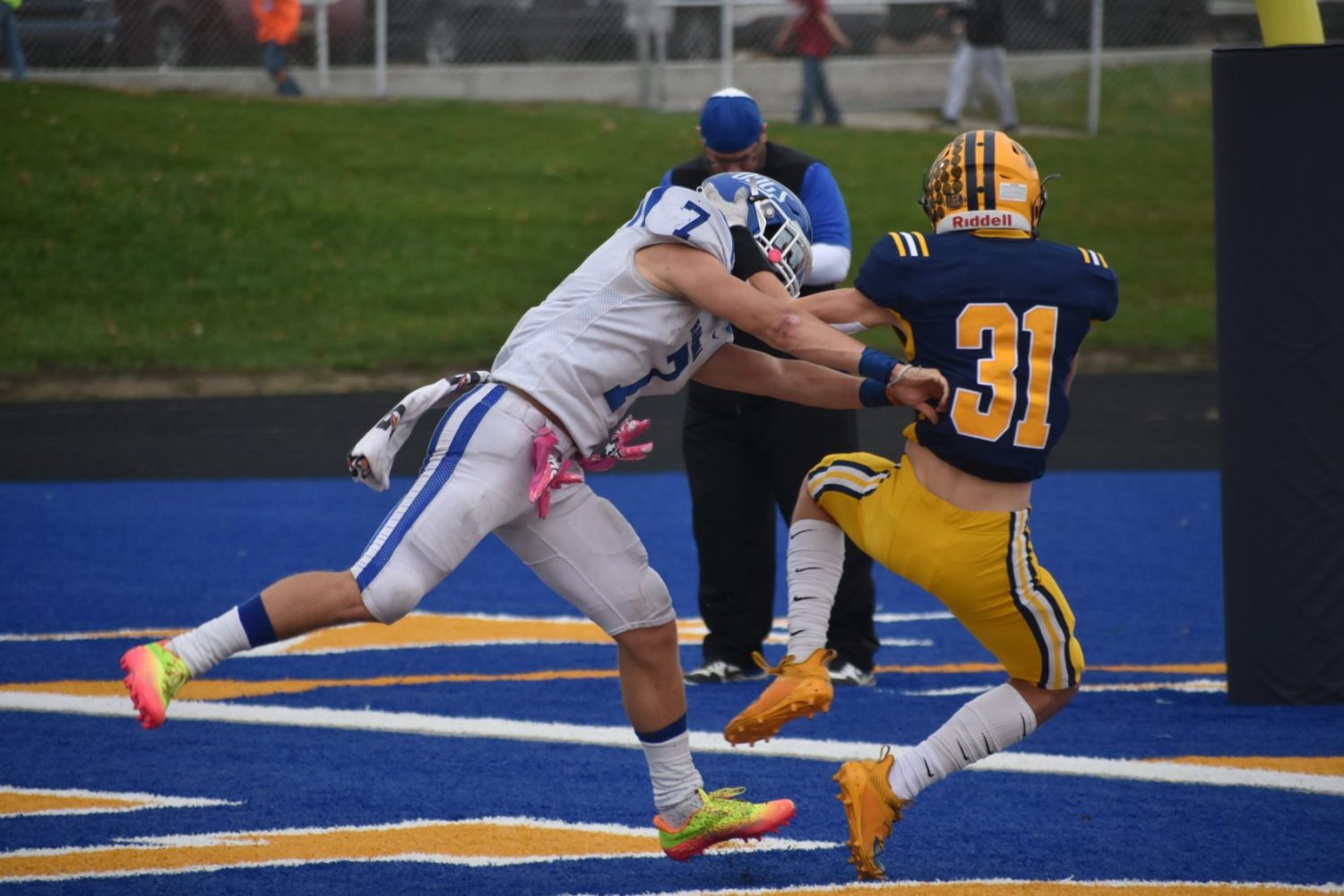 ITHACA — Ravenna hung with traditional football power Ithaca for one half in Saturday’s Division 7 district final in Ithaca.
The second half was a whole different story as the Bulldogs dropped a 63-27 decision
.
Ravenna, making its fourth straight appearance in the playoffs, hung with the Yellowjackets throughout the first half, matching them score for score and trailed by only eight points at halftime.
But the Yellowjackets, in the playoffs for the seventh straight year, shut out the Bulldogs 28-0 in the second half.
It is the Yellowjackets first district championship since 2017. They lost to Frankenmuth 28-20 in the state finals.
Ithaca took a 7-0 lead at the end of the first quarter a 28-yard pass with 7:49 left in the period.
“Other than that, I thought we held them in check,” Ravenna head coach Justin Ego said. “The second quarter a lot of points were scored and it kind of went back-and-forth. The ball started rolling the other way with some breaks, and we just couldn’t get back on track.”
Ravenna answered the Yellowjacket score with 10:59 remaining in the second quarter when Hunter Hogan kept the ball and scooted in from 7 yards out to cut the Ithaca lead to 7-6.
The Bulldogs would get no closer the rest of the way.
Ithaca returned the ensuing kickoff 80 yards to the house to make it 14-6 just 11 seconds later and increased it to 21-6 on an 80-yard scoring pass at the 8:37 mark of the second quarter.
Hogan took the Ithaca kickoff and ran it back 89 yards and added the extra point to make it a 21-13 game with 8:24 still to play in the first half.
The Yellowjackets came right back, scoring on a 21-yard touchdown pass which boosted their lead back to a two-score margin, 28-13 with 6:22 left before halftime.
Ravenna matched the Yellowjackets yet again, Hogan rolled out and hit the outside for a 10-yard run to make it a one-score deficit again, 28-20.
But the Yellowjackets just kept coming at the Bulldogs, scoring on a 5-yard run to increase their lead to 15 points, 35-20 still in the second quarter.
Hogan went to the air for the last Bulldog score, hooking up with Blake Homoly on a 25-yard strike that shaved the Yellowjacket lead to eight, 35-27 at the half.
Ravenna would not score again, while the Yellowjackets scored 14 points in each of the last two quarters.
“We had a bunch of seniors graduate off last year’s team and we knew we were going to be young and inexperienced,” Ego said. “You don’t know what to expect. I think we gelled and got better each game. After the Oakridge game, we kind of came together. But, today just wasn’t our day. I think this team came together and did some great things that looking back we’ll be proud of. Right now, it hurts.
“For the seniors, it was their final game and nothing you can say will take that pain away.”
Ithaca compiled 571 yards total offense while Ravenna finished with 249. Ithaca had 254 yards on the ground to Ravenna’s 103. The Yellowjackets had 317 yards passing to the Bulldogs’ 146.
Hogan completed 11-of-26 passes for 146 yards and a touchdown. He also led the Bulldogs in rushing with 82 yards and two touchdowns on 18 carries.
Ravenna’s leading receiver was Homoly with 7 catches for 96 yards and a touchdown. Drew Mabrito hauled in two passes for 34 yards.
Defensively, the Bulldogs were led by Hogan with 18 tackles, including one for loss. Derek Finlay was in on 11 tackles, Mabrito had 7 stops, one for loss, while Brayden Fry, Homoly and Caleb Forsythe each had 5 tackles.
The Bulldogs, who finished 7-4, graduate five seniors, but obviously Hogan’s absence will be felt the most.
Ithaca (10-1) faces Traverse City St. Francis (11-0), which turned back Benzie Central, 34-18. That regional game will be played in Traverse City.
All photos below are courtesy of the Gratiot County Herald 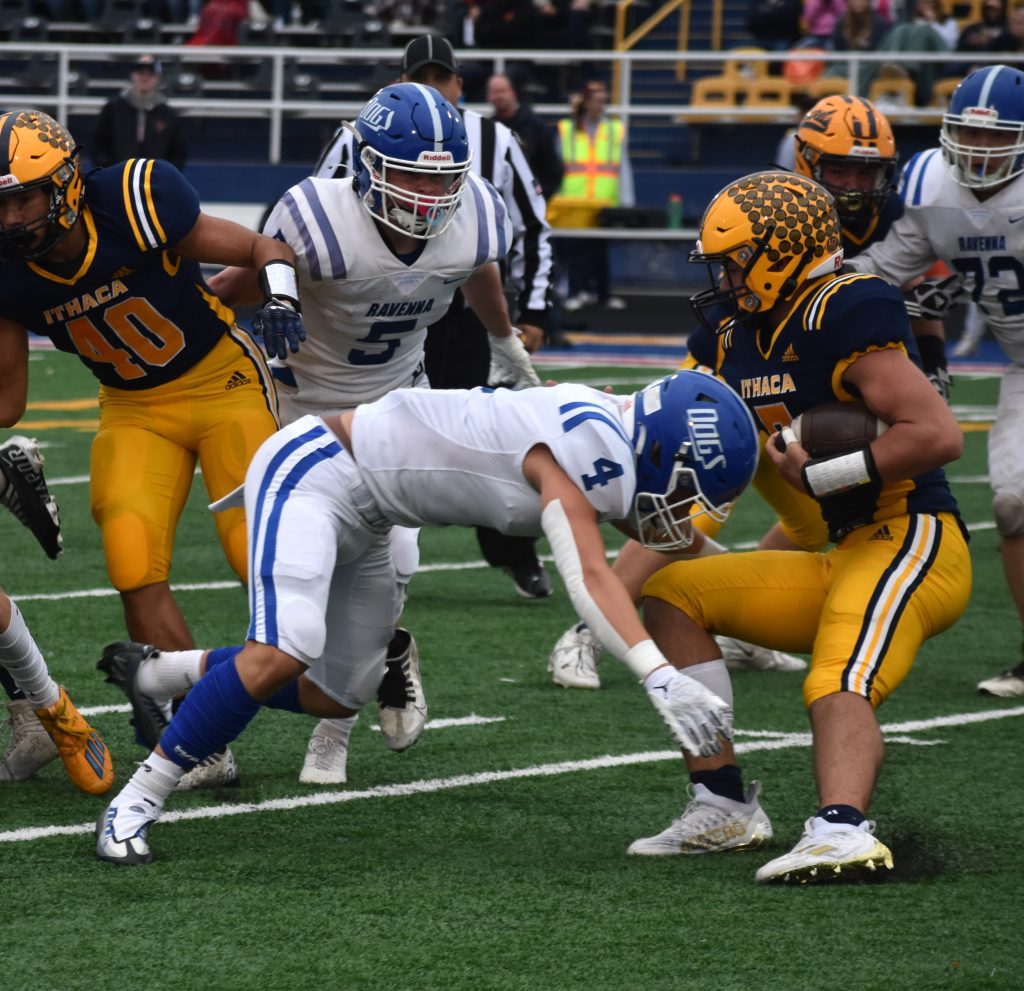 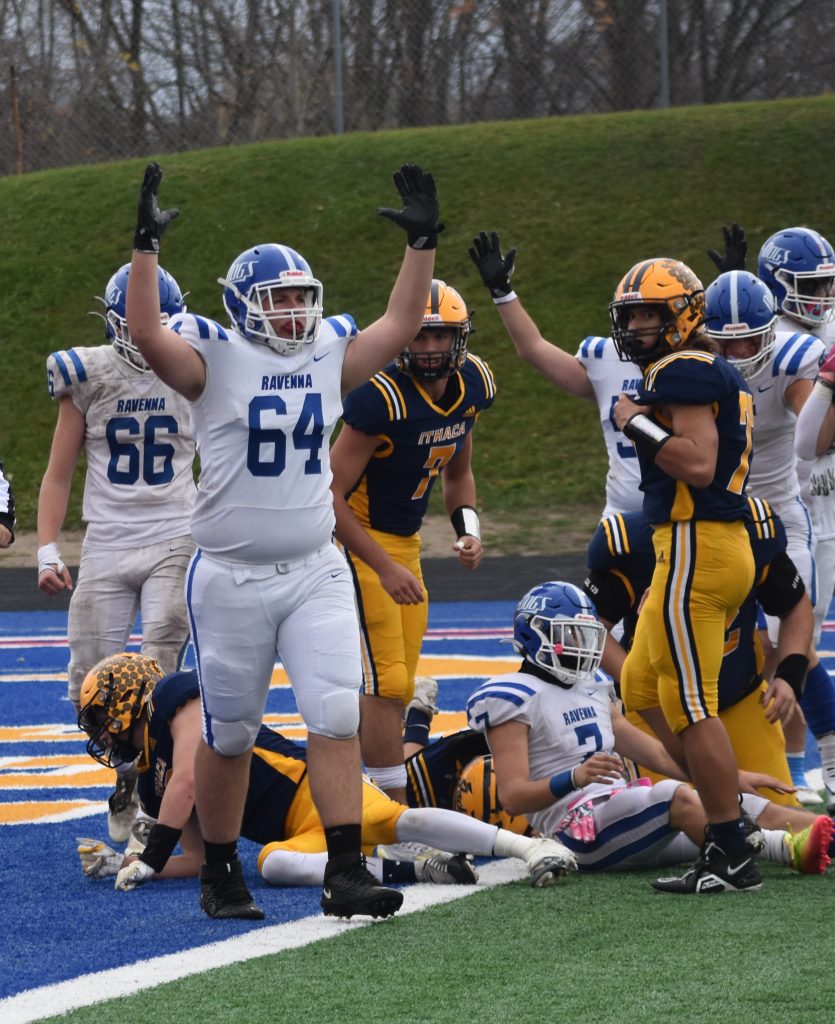 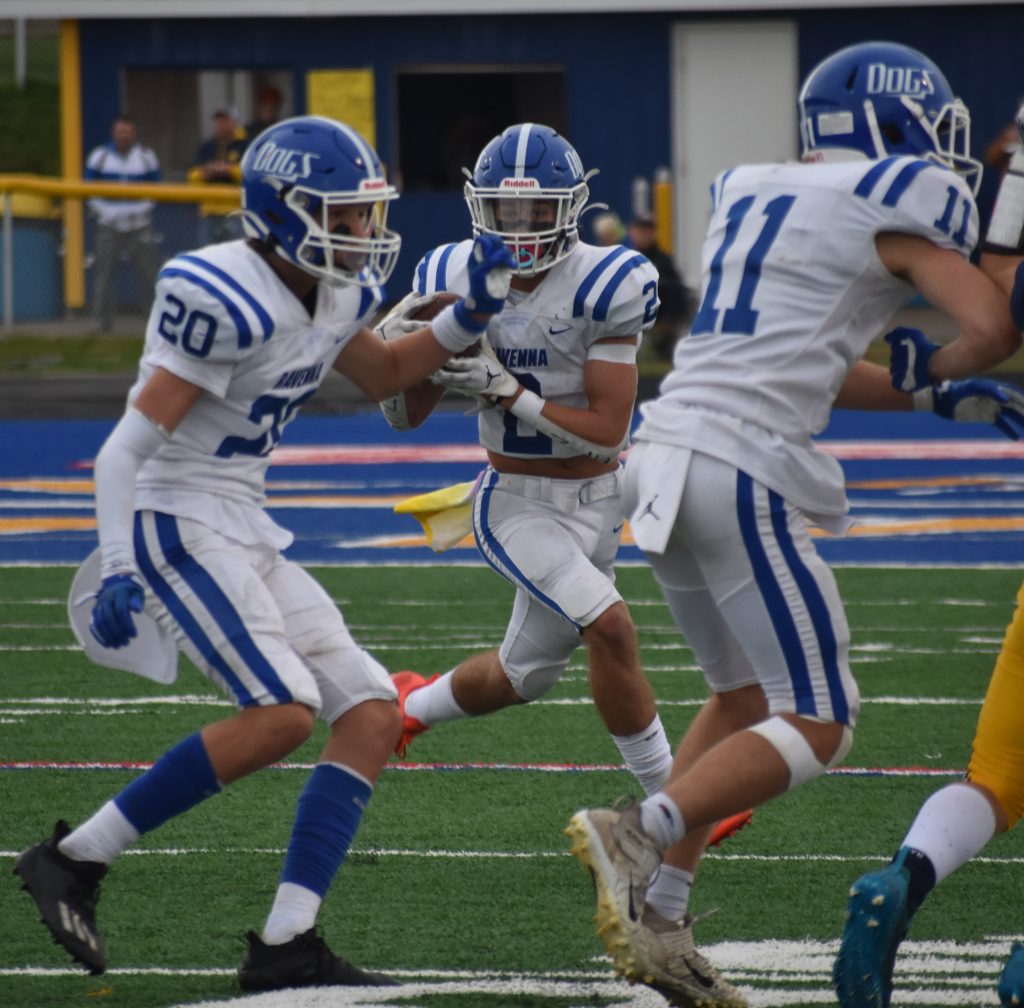 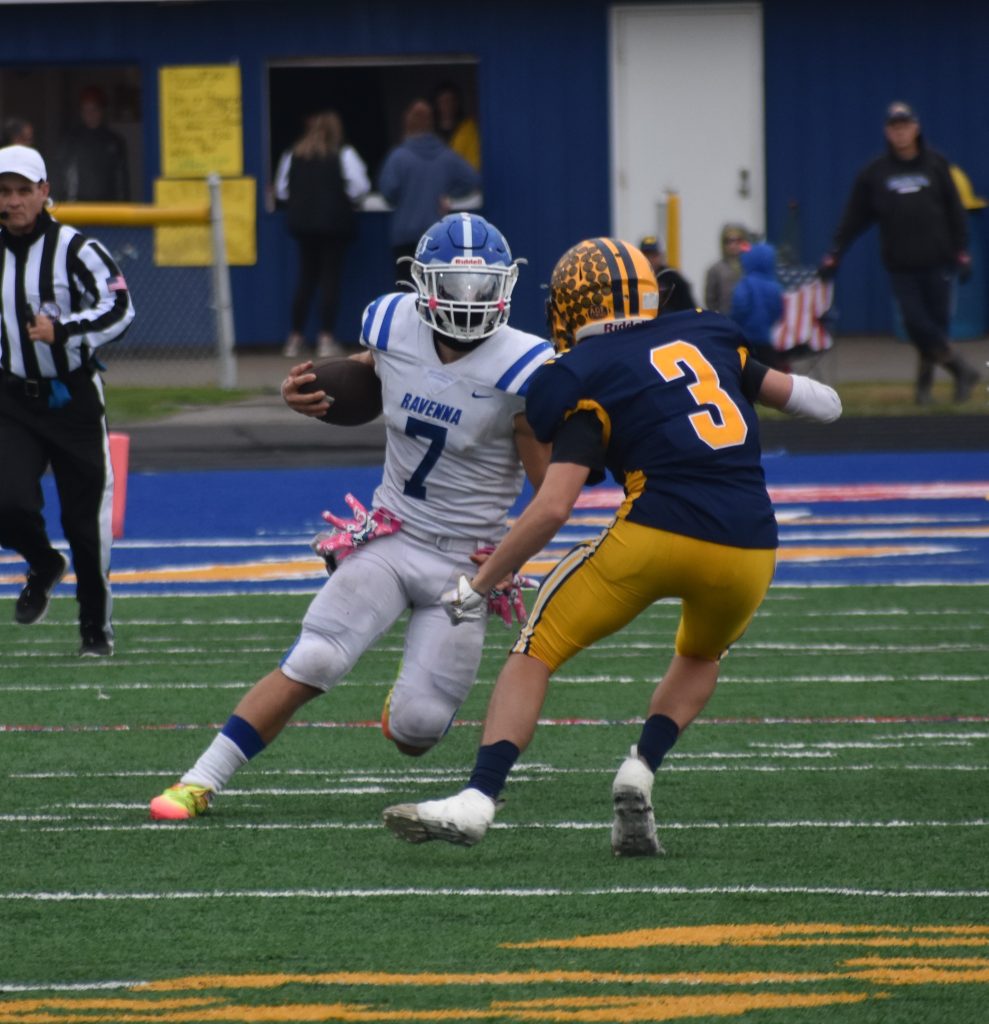 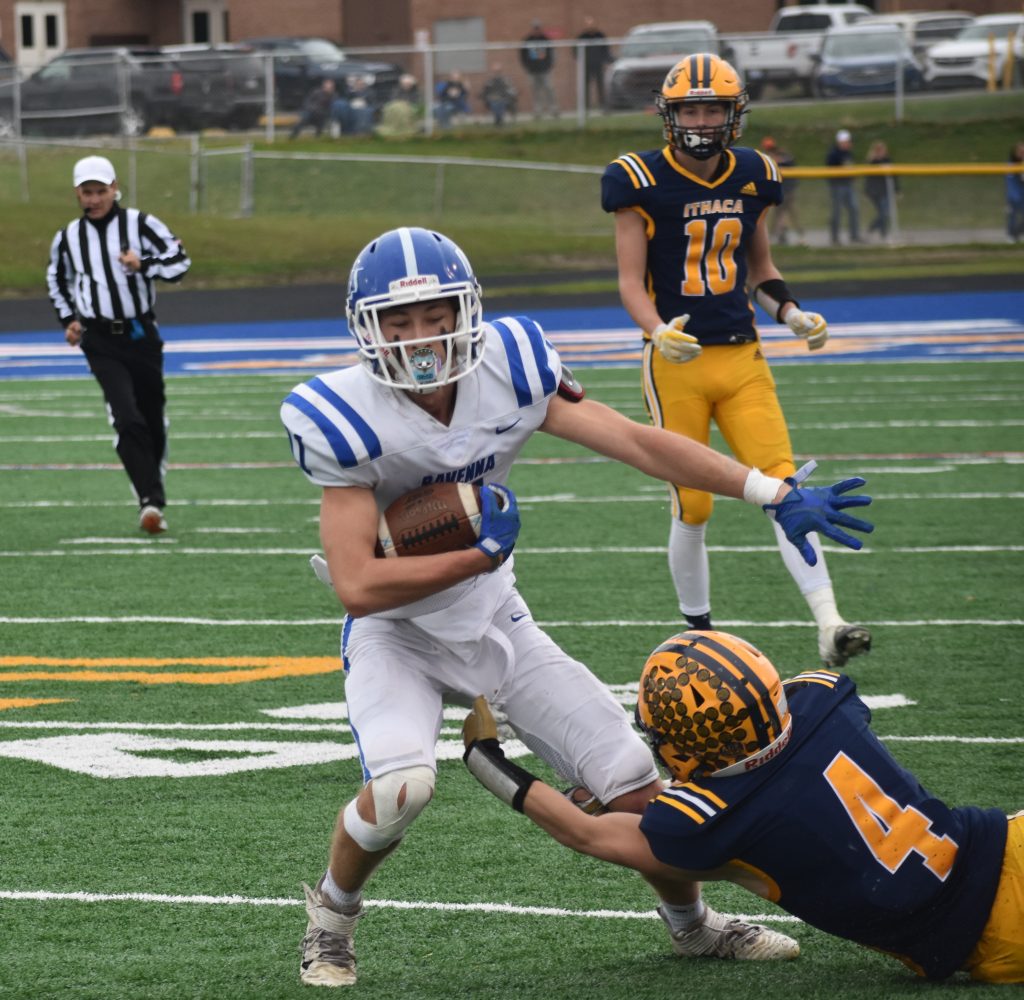 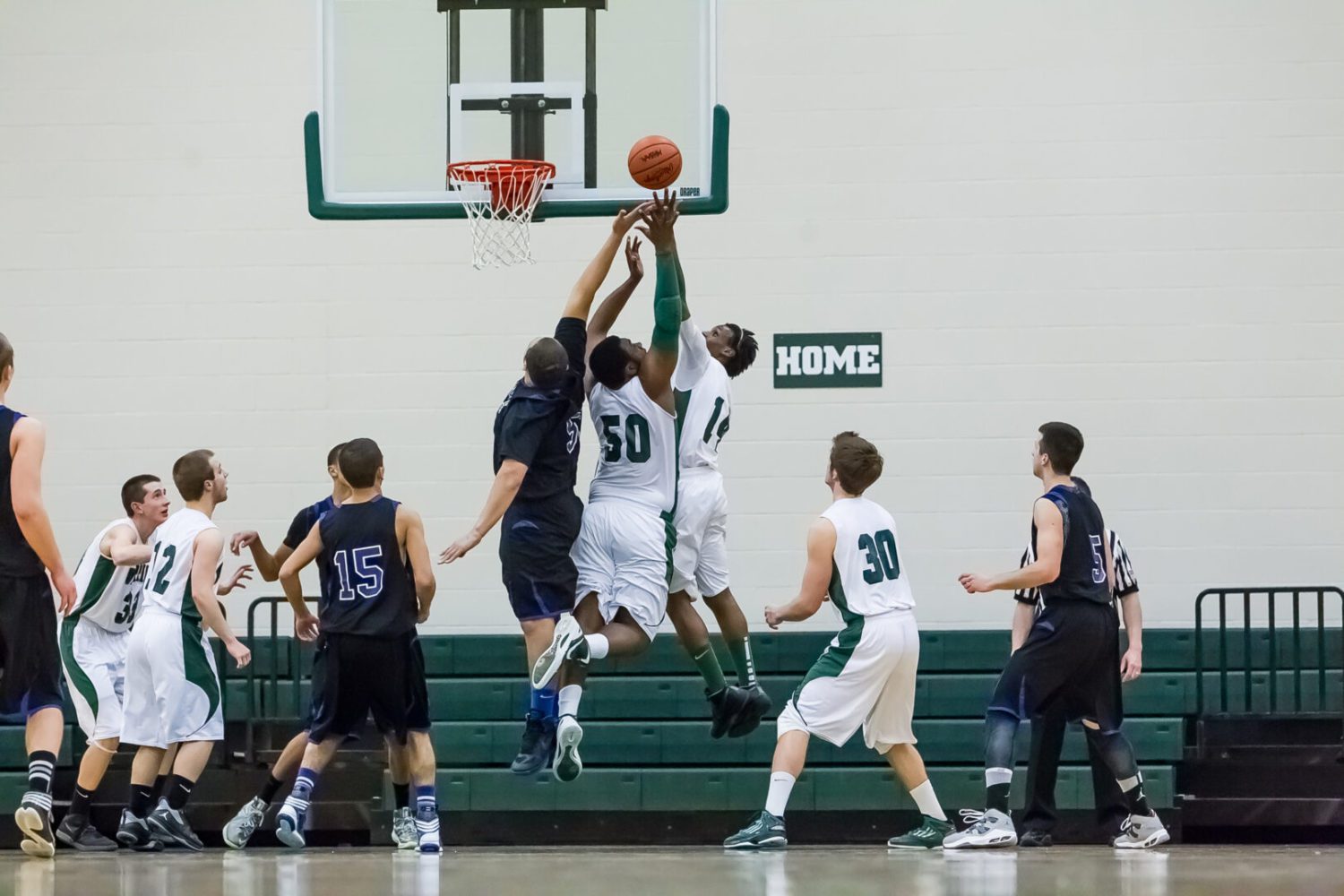