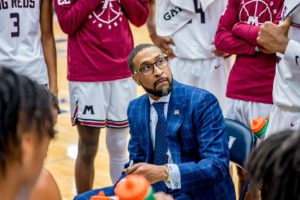 FERNDALE–The Muskegon Big Reds boy’s basketball team kept their perfect record intact on Saturday evening as they got by the Warren Lincoln Abes by a score of 50-45 at the Horatio Williams Foundation Freedom Classic played in Ferndale.

Once again the Big Reds rode the offensive backs of Jordan Briggs and Anthony Sydnor III. Briggs finished with a team high 17 points, which included nine points in the final eight minutes where he went 4-of-6 at the free throw line. Sydnor III tossed in 13 points and Terrence Davis chipped in with nine points.

Muskegon went 7-of-12 from the free throw line in the fourth quarter and 11-of-16 for the game. The Big Reds connected on seven three pointers during the contest.

The Big Reds held a slim 12-10 lead after the first eight minutes of action. Neither team found much offense during the second stanza as the Abes knotted things up at 17-17 by the halftime break outscoring Muskegon 7-5 in the period.

Muskegon put some distance between themselves and Warren Lincoln with a third quarter 17-10 scoring advantage, Sydnor III led the attack with eight points in the quarter and Briggs tossed in six points to give the Big Reds a 34-27 lead at the end of three quarters.

The Abes held the upper hand in the final eight minutes 18-16 but the Muskegon held on to secure their eighth straight win of the season.