GRAND HAVEN – After a season-ending loss to Reeths-Puffer in districts last season, the Grand Haven basketball team was eager for revenge.

They got in on Tuesday, riding a double-digit lead for most of the contest to a 42-33 victory over the Rockets in a battle between two of the best girls teams in the area. 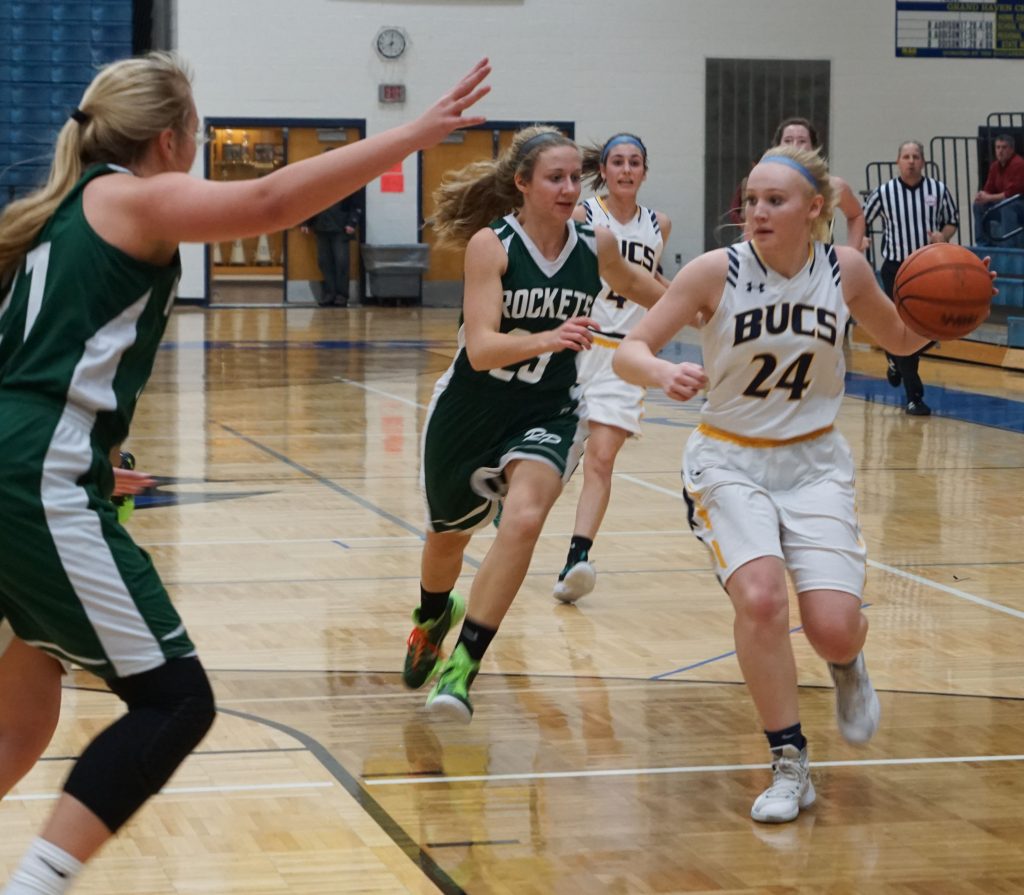 Grand Haven improved to 5-2 on the season while Reeths-Puffer fell to 4-2.

“We got that cushion and then we never let up,” said Grand Haven head coach Katie Kowalczyk-Fulmer. “I have a ton of respect for Reeths-Puffer and they have a great team. I think it was just our night tonight. Having been on the other end, I know it’s tough having to play catch-up all night long. We shot the lights out in the first half.”

Grand Haven’s defense was too much for R-P in the first half. The Rockets’ standout post players, Delaney Bolles and Brooke Larabee, were held to a combined six points during the first two quarters.

“We have more size this year and Esther really showed her length down low,” Kowalczyk-Fulmer said.

While the Buccaneer defense kept the Rockets from going on any big runs, the sharpshooting of junior Autumn Buikema allowed Grand Haven to establish an 18-point advantage early in the second quarter. Buikema scored all of her game-high 10 points in the first half. 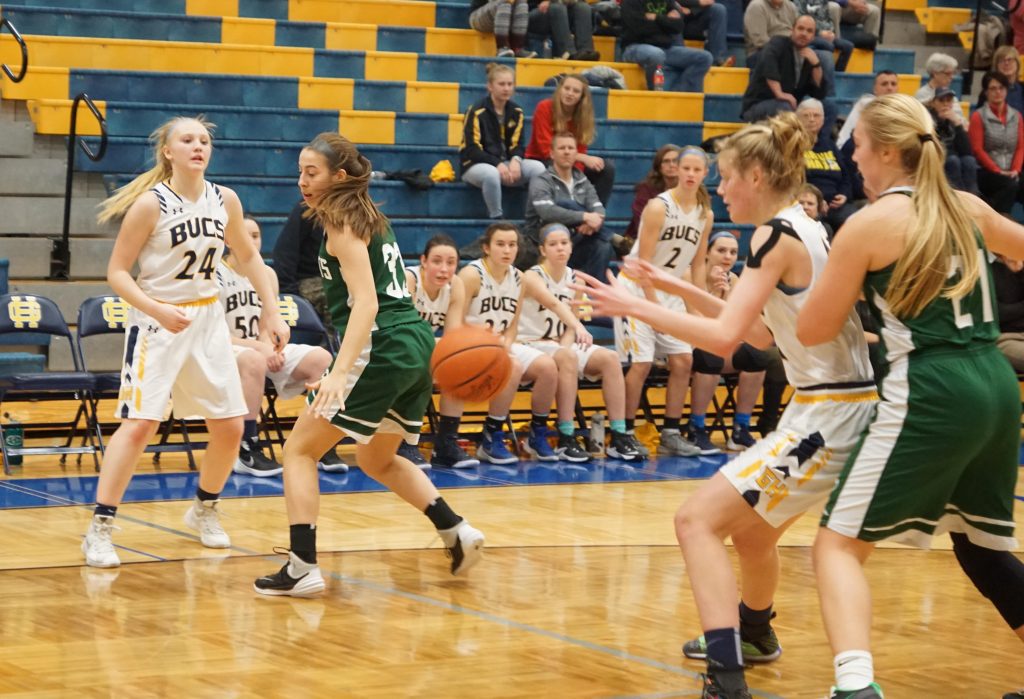 Grand Haven’s Esther Byington gets the ball in the post from 24 Anna Strom. Photo/Leo Valdez

“I’m just so happy for her,” Kowalczyk-Fulmer said. “She’s a kid that you know can take those shots, she just hasn’t had a lot of them.”

Leading 9-3 after the first quarter, the Bucs went on a 12-0 run to open the second and took a 21-3 lead. The outburst was capped with back-to-back three-pointers by Buikema and sophomore Alli Keyser, forcing the Rockets to call a time out.

Keyser’s passing was key for Grand Haven during the big second quarter. She set up every single basket during the quarter, with the exception of her own three-pointer. She finished with a game-high nine assists to go along with her nine points.

The Bucs entered halftime with a comfortable 25-11 lead, but the Reeths-Puffer offense got untracked in the second half to challenge Grand Haven.

The two teams traded blows during the third quarter, cancelling each other out with 11 points each. The Bolles/Larabee duo came to life and gave the Rockets a much-needed spark.

With just over two minutes remaining in the third quarter, a three-pointer from senior point guard Elysia Mattos cut the Rocket deficit to nine.

The energy seemed to be with the Rockets, but Keyser’s ball-handling got Grand Haven through the R-P press in the fourth quarter and the Rockets were forced to foul. The Bucs didn’t let their lead slip any further and cruised to the nine-point win.

Bolles led the way for R-P with nine points and Larabee chipped in seven.

The Rockets will host Spring Lake on Jan. 6 while the Bucs will head to Caledonia on the same day to begin O-K Red Conference play. 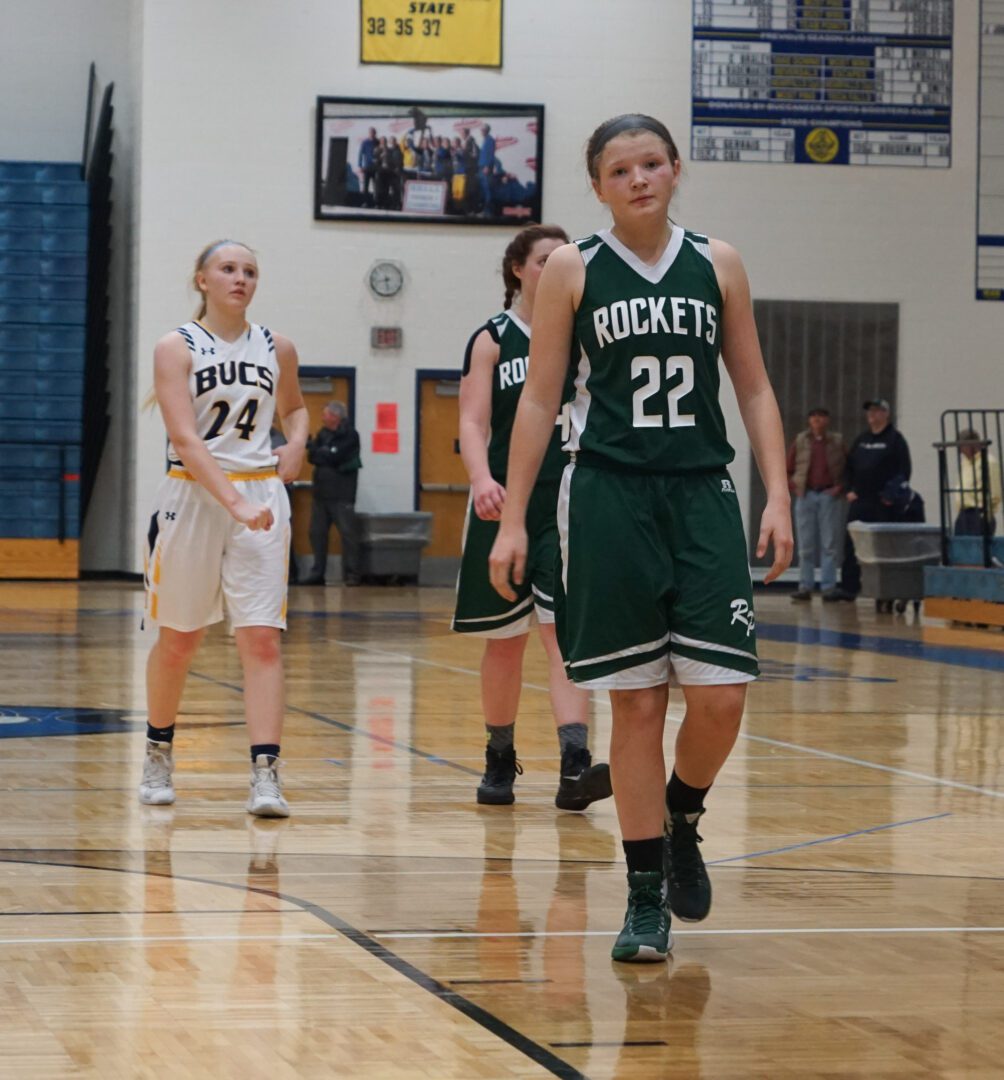 Reeths-Puffer freshman Lauren Ross tries to relax during a break in the action. Photo/Leo Valdez 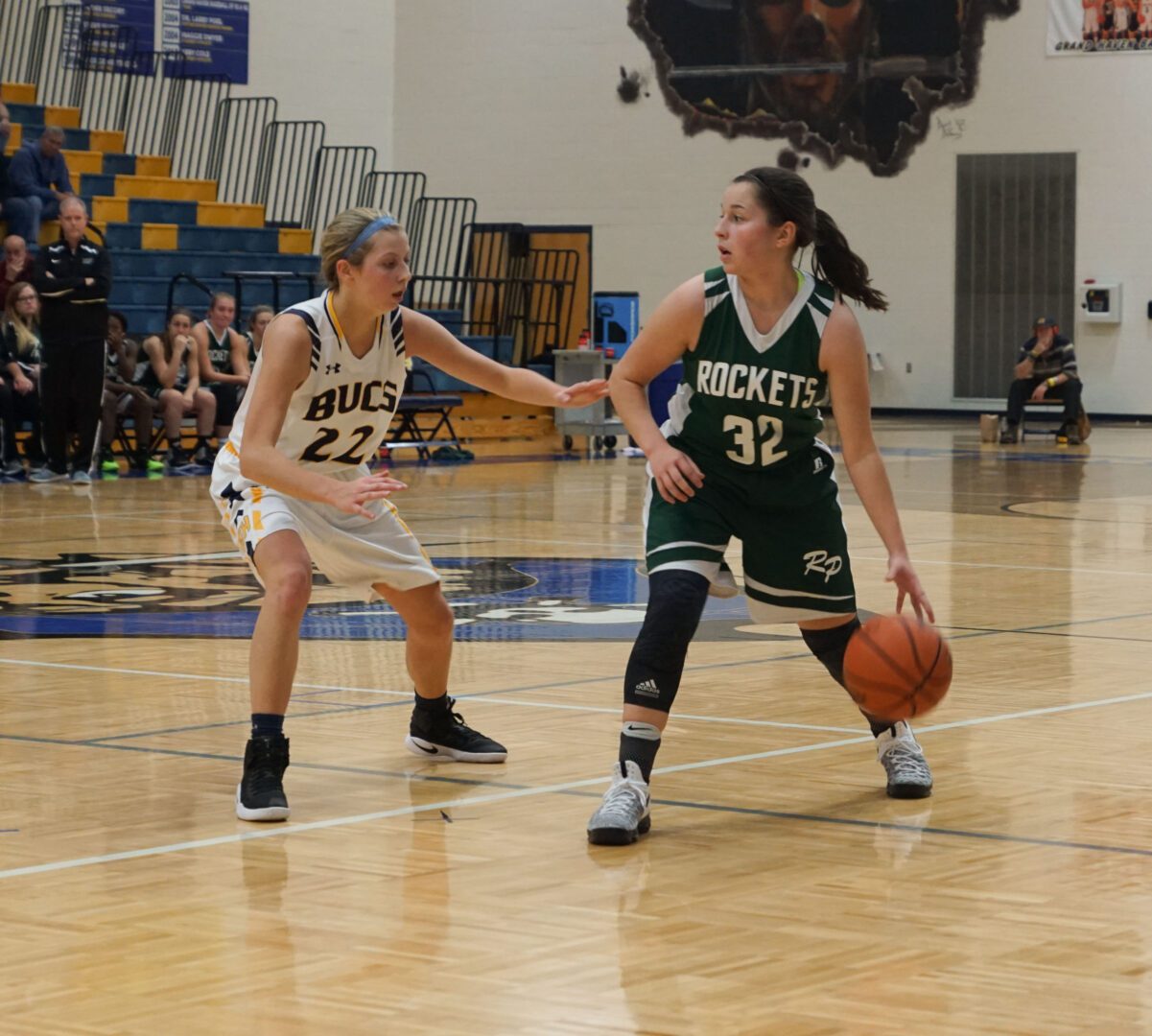 Rocket point guard Elysia Mattos controls the ball just past half court while being guarded by Autumn Buikema. Photo/Leo Valdez 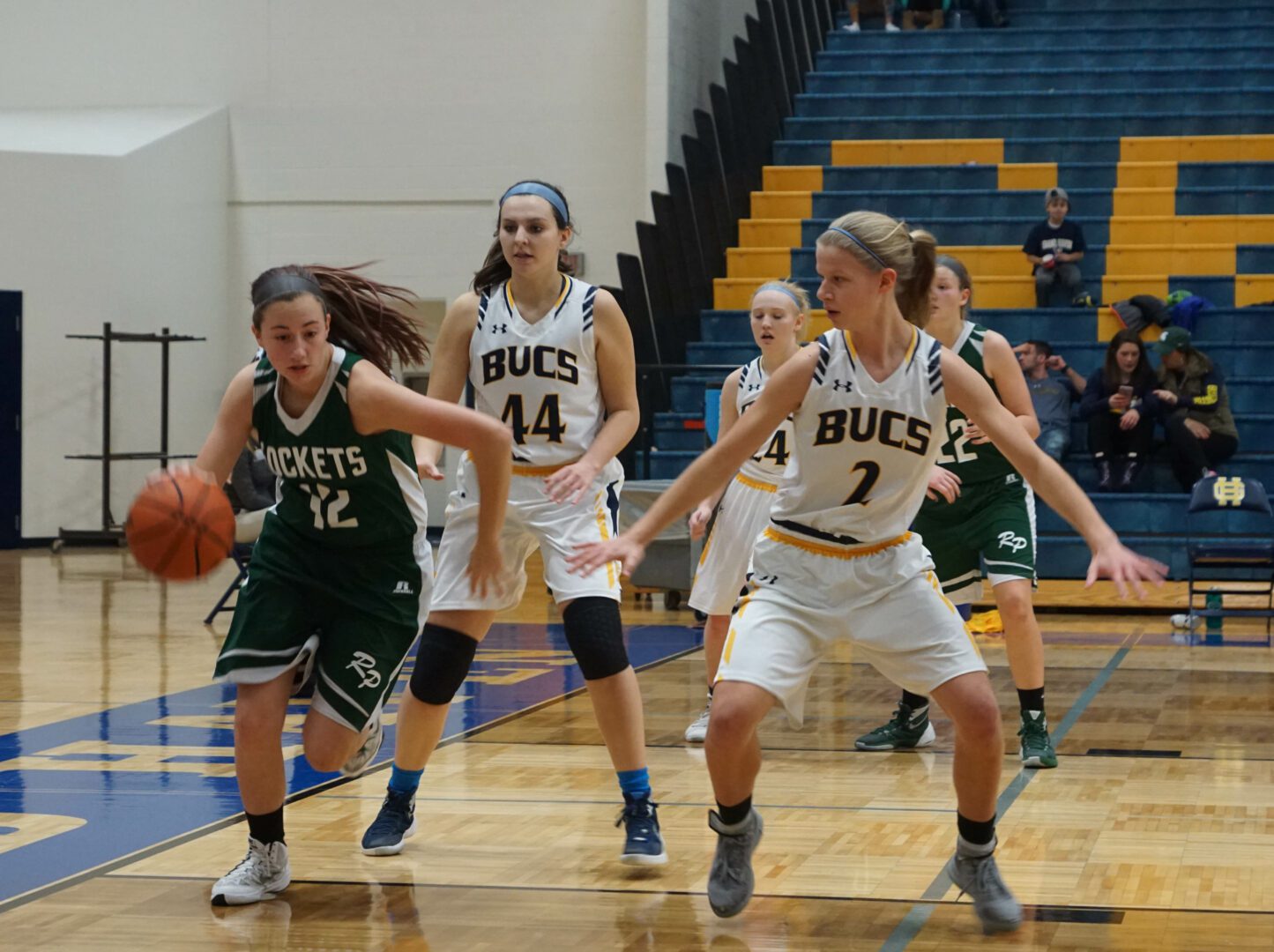 Shelby Springer brings the ball out of the pain for Reeths-Puffer with No. 2 Lucy Toppen and No. 44 Maggie Long blocking the paint. Photo/Leo Valdez 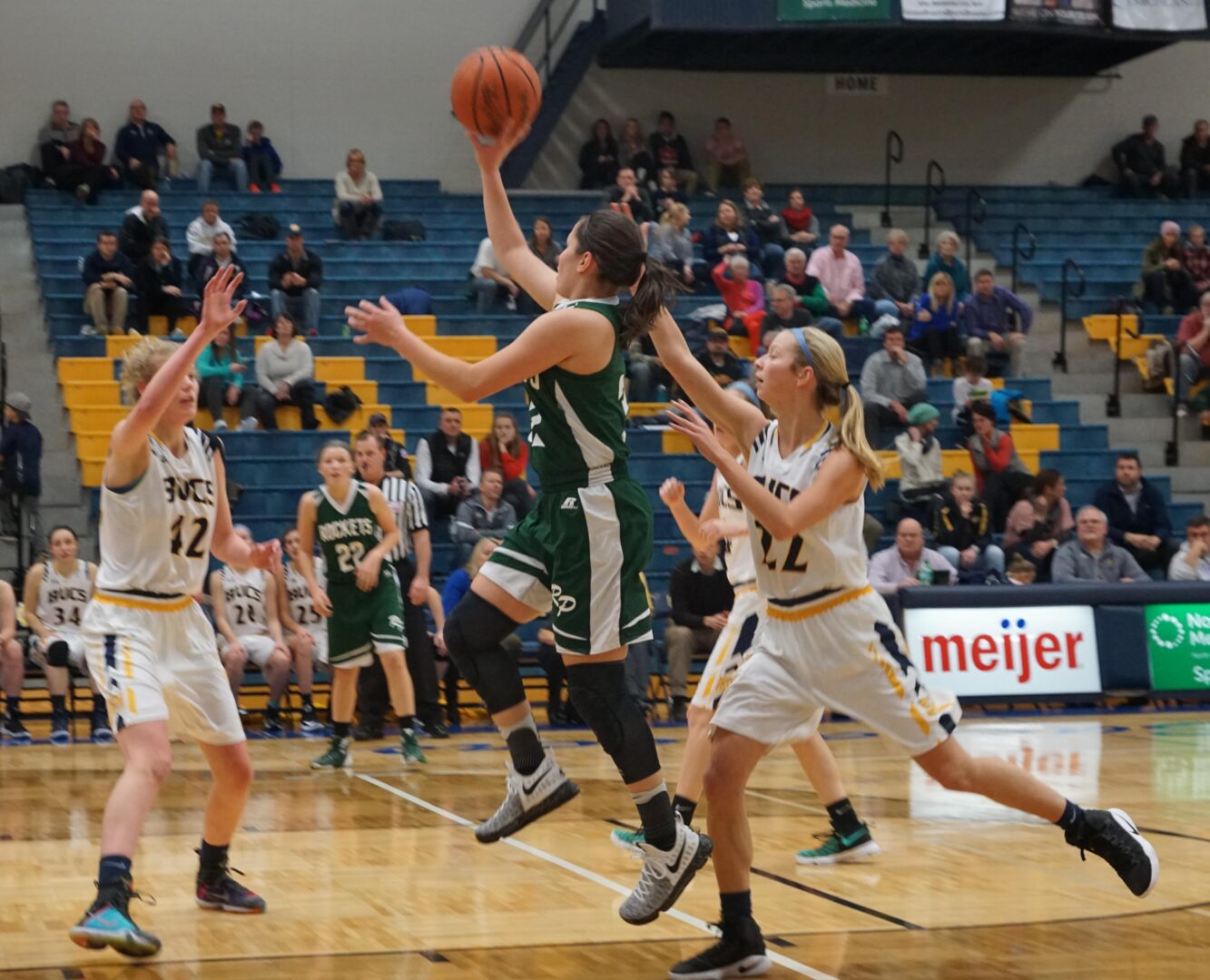 Elysia Mattos goes for the runner in the lane for RP while No. 22 Autumn Buikema tries to defend. Photo/Leo Valdez 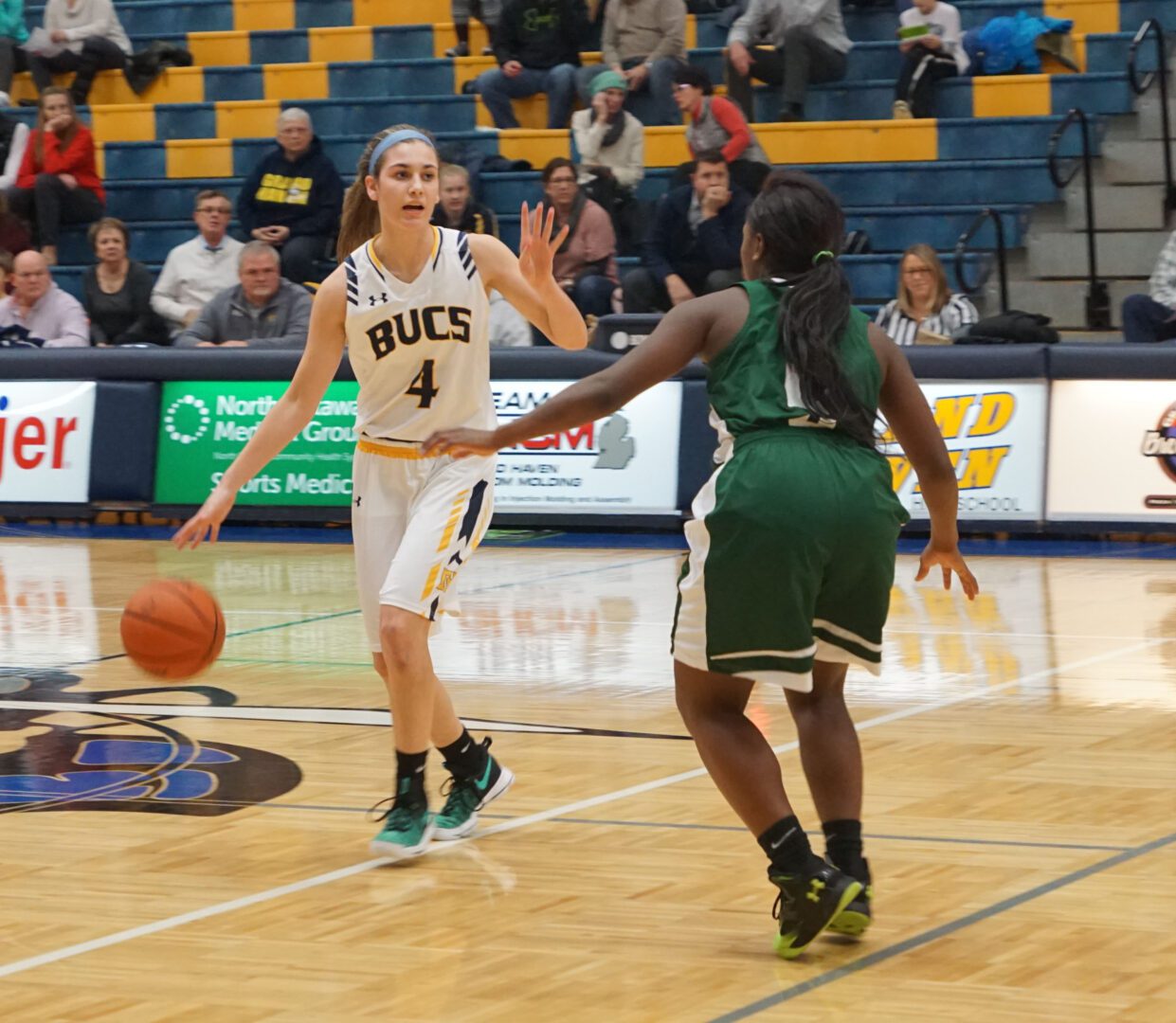 Alli Keyser dribbles the ball for Grand Haven while being guarded by Artrese Williams. Photo/Leo Valdez