ZEELAND – With just over five minutes remaining in the third quarter of Friday night’s showdown between Mona Shores and Zeeland West, the Sailors had their backs against the wall.

They trailed 20-14 and the Dux were driving toward another score.

On fourth down from the Sailor 38 yard-line, Mona Shores had one chance to get a stop and swing the momentum back in their favor.

Mona Shores halted Dux running back Aaron Sleeman with a hoard of tacklers just short of the first down marker, then regained possession and stormed down the field to take the lead for good. 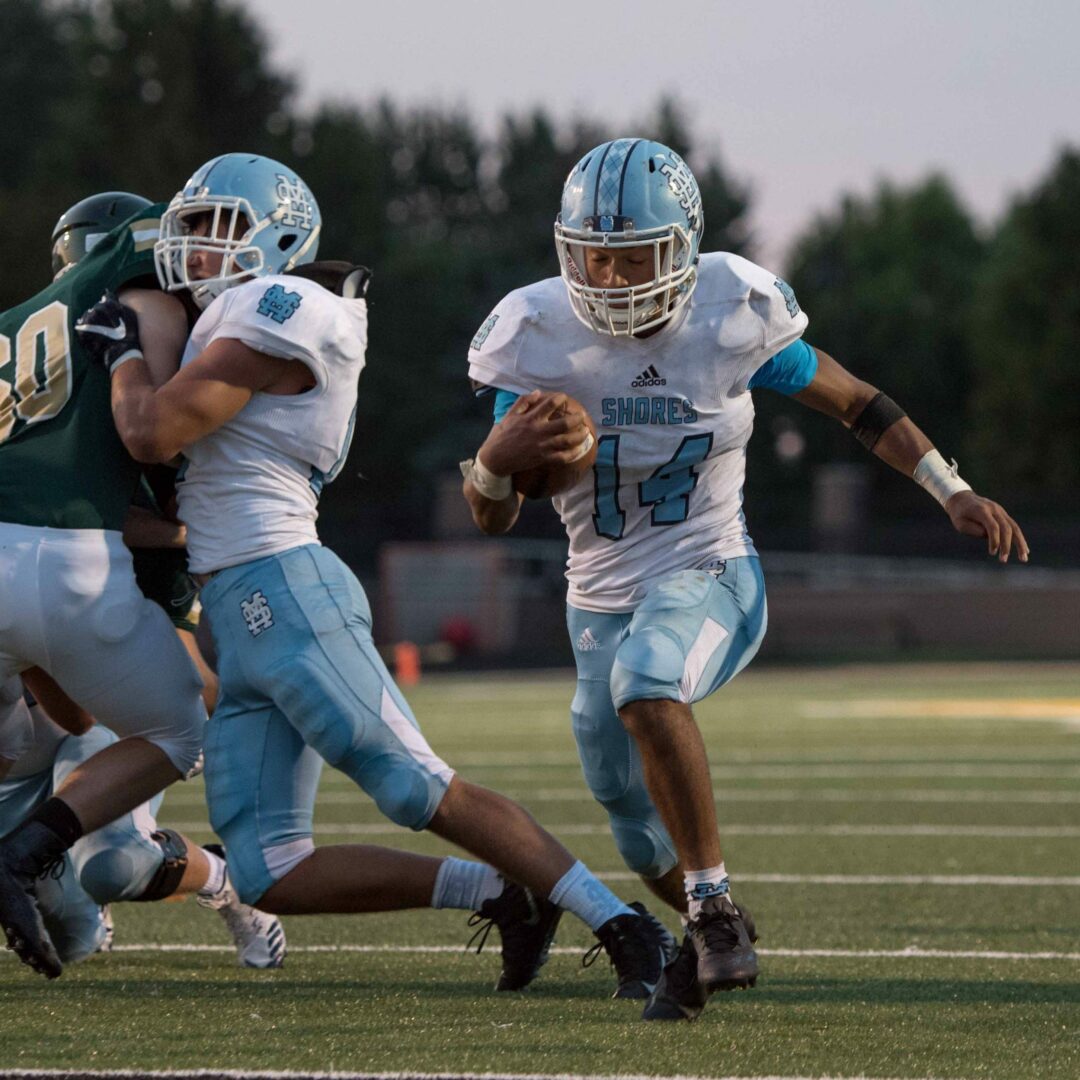 When it was all over, the Sailors emerged with a big 42-20 victory over a strong Zeeland West squad on its home field. They are now 2-0 in what is shaping up to be a very promising season.

“Our defense on that fourth down was big,” he said. “You saw our bench erupt. That energy is contagious. They just feed off each other.

“That’s the great thing about football; when your offense is struggling, your defense can pick you up and vice versa.”

The Sailors found themselves in a hole early after struggling to stop a relentless rushing attack from Zeeland West.

The Dux received the opening kickoff and embarked on a 19-play, 79-yard drive that spanned 10:27, nearly the entire first quarter. Jacob Houle found Zeke Buter for a 12-yard touchdown pass to finish the drive.

The Sailors responded quickly with a 58-yard screen pass from quarterback Tristan Robbins to Damari Roberson, which gave them a 7-6 lead at the end of the first quarter. 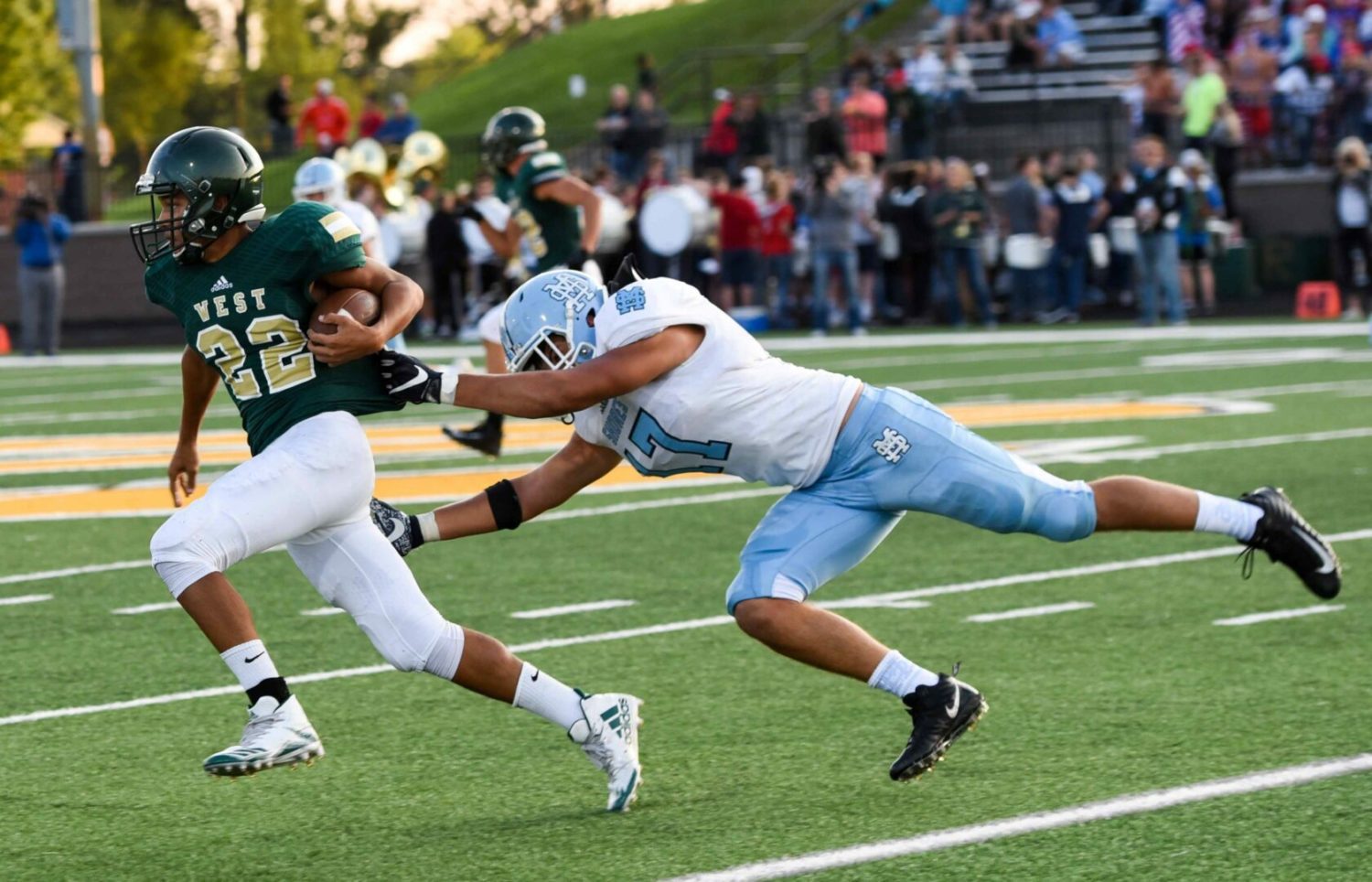 On the next play from scrimmage, Houle took off on an 84-yard run to put the Dux back on top. After a Shores turnover-on-downs, Sleeman scored from two yards out to make it 20-7 Zeeland West with 4:27 remaining in the first half.

Despite watching his Sailors fall behind early for the second time in two games, Koziak doesn’t see reason for concern.

“(Canton and Zeeland West) are good team” the coach said. “That’s the explanation for it. They’re not just going to roll over. They’re going to come to win the game.

“I didn’t like our locker room before (the game), but we blanked them in the second half and put up four touchdowns. I’m just so happy for our kids.”

The Mona Shores comeback started with a D’Anthony Davis touchdown run from three yards out, cutting the deficit to 20-14. After the big fourth down stop, Robbins connected on a 43-yard pass to a diving Keyshawn Summerville. That set up Davis for the go-ahead score, a six-yard run. 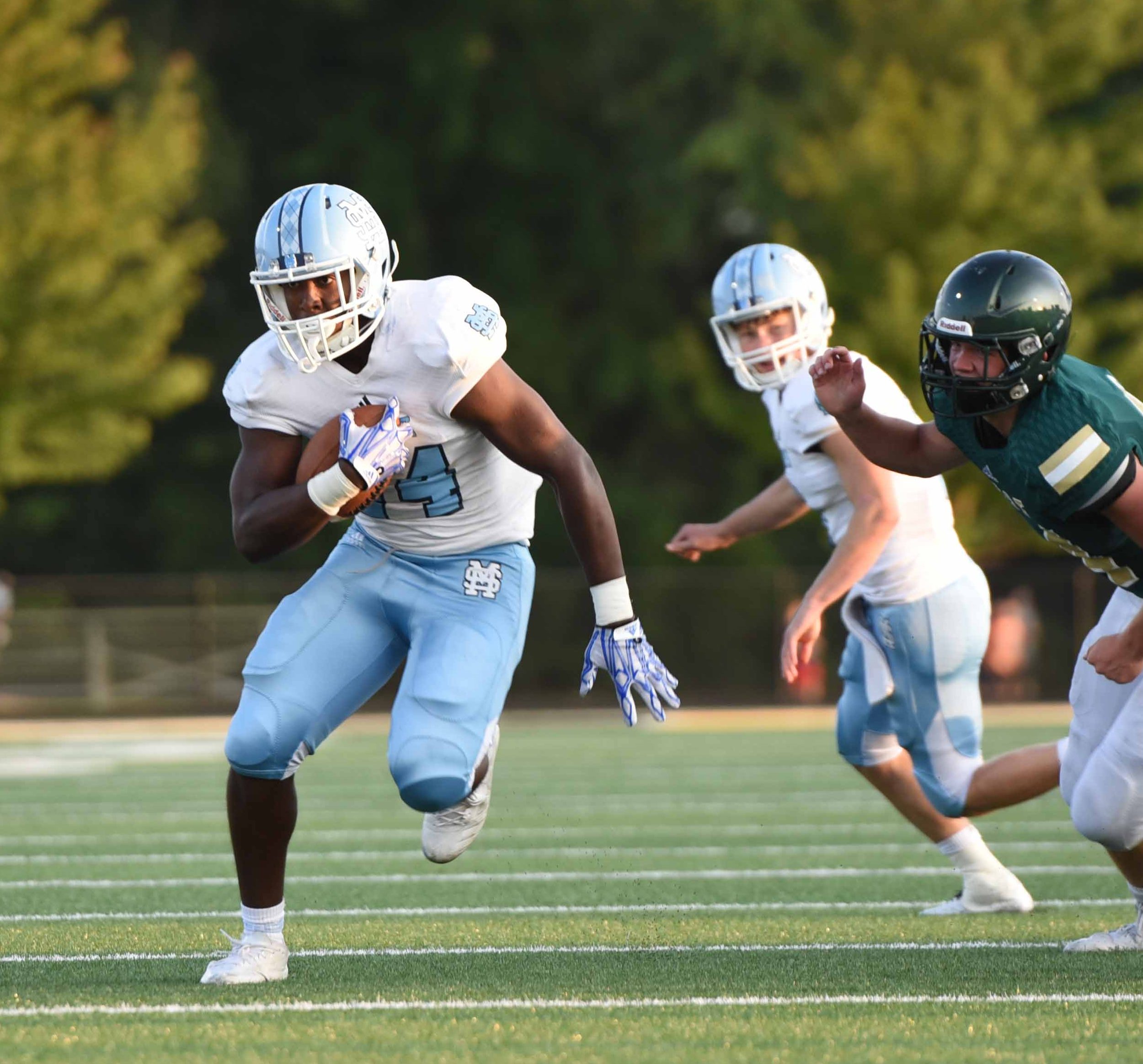 Mona Shores entered the fourth quarter with just a one-point lead, but ran through, around and over Dux defenders with the speed-power combo of running backs Davis and Sincere Dent. Dent ran for 72 yards in the fourth quarter alone.

Robbins (16 yards), Dent (five yards) and Davis (44 yards) all added touchdown runs in the final quarter to put the game away.

“We are blessed with some tremendous skill players,” Koziak said. “Sincere’s a big back. Then we have Davis, who’s a little scatty back, so it’s a nice combo.”

Robbins completed 7 of 11 passes for 137 yards and one score. He rushed for 47 rushing yards and another touchdown. Davis found the end zone three times in a 67-yard effort. Dent plowed his way to a team-high 115 yards on 10 carries. Roberson had three catches for 81 yards and a score, while Summerville snagged three balls for 57 yards.

Mona Shores will have its home opener against Rockford next Friday. 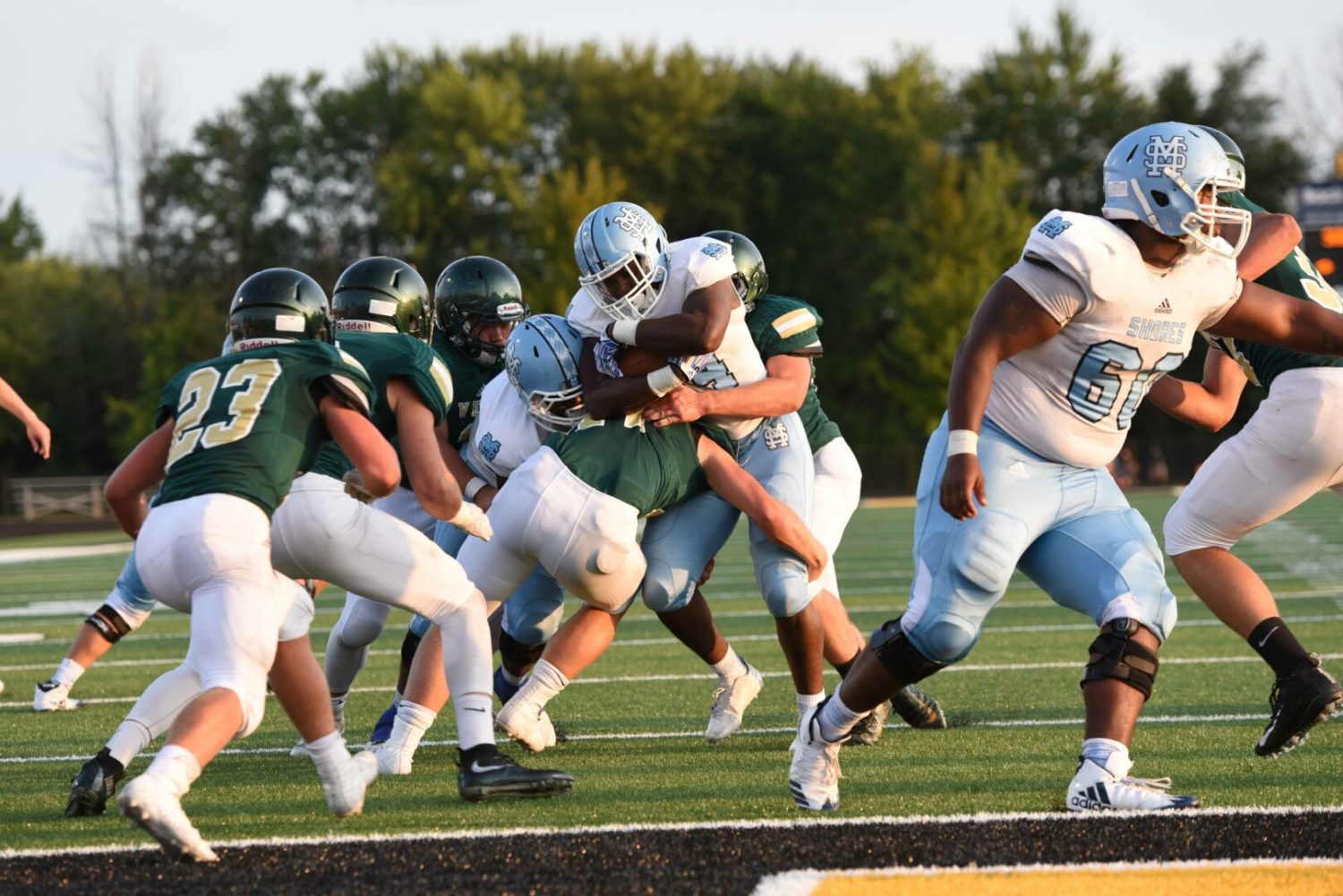 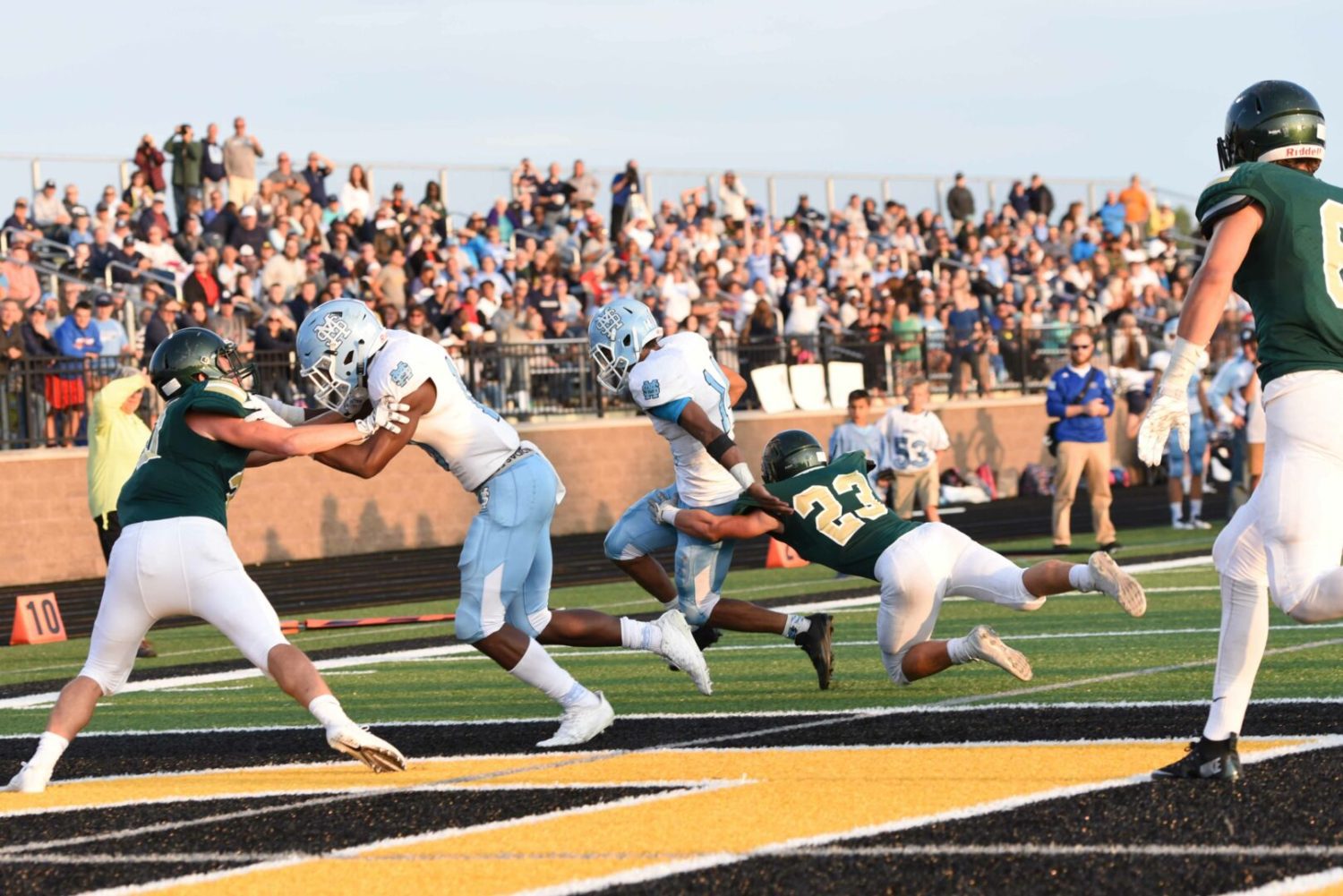 D’Anthony Davis (14) takes it in for the score to pull Mona Shores to within 6 points before half time. (photo/Eric Sturr) 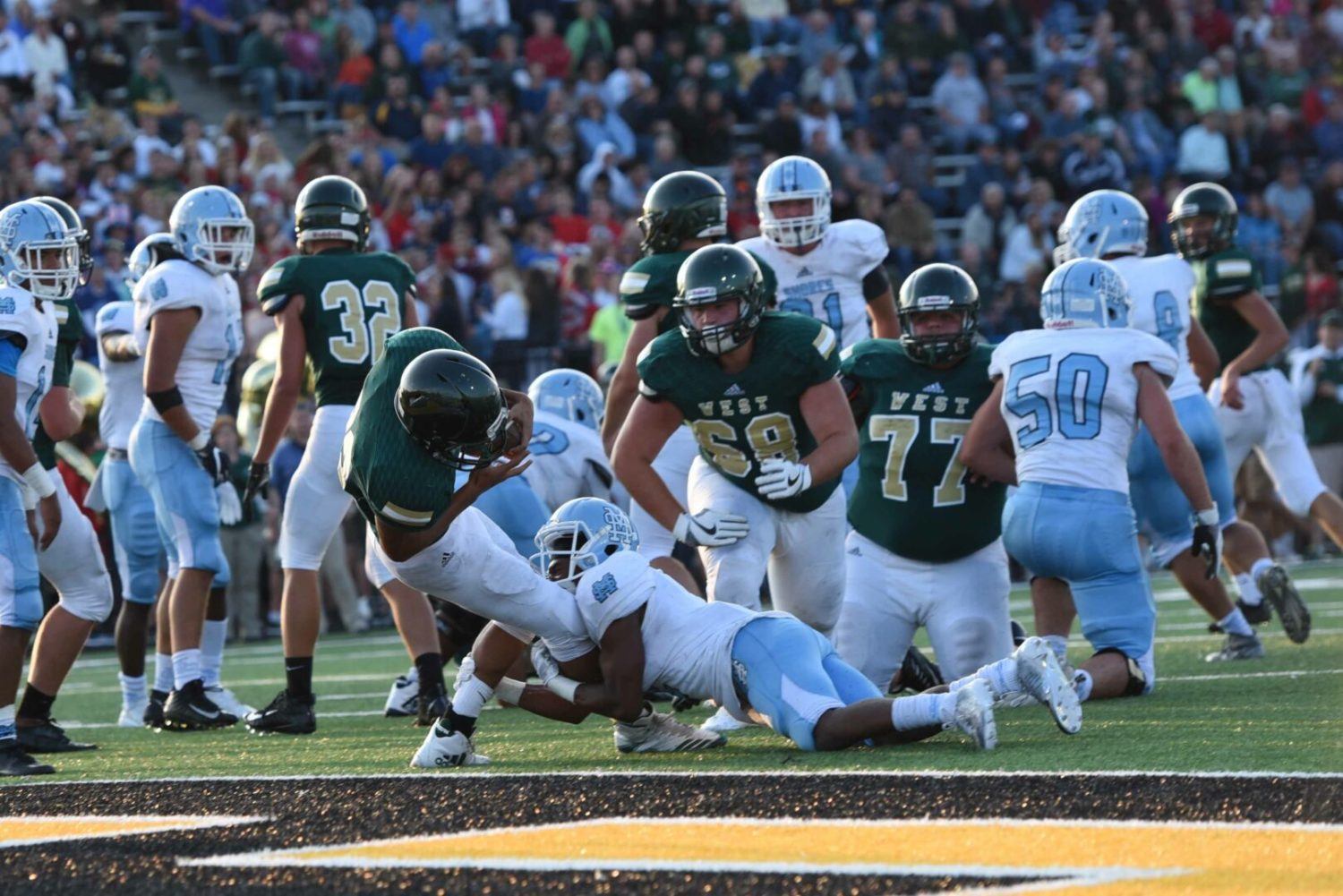 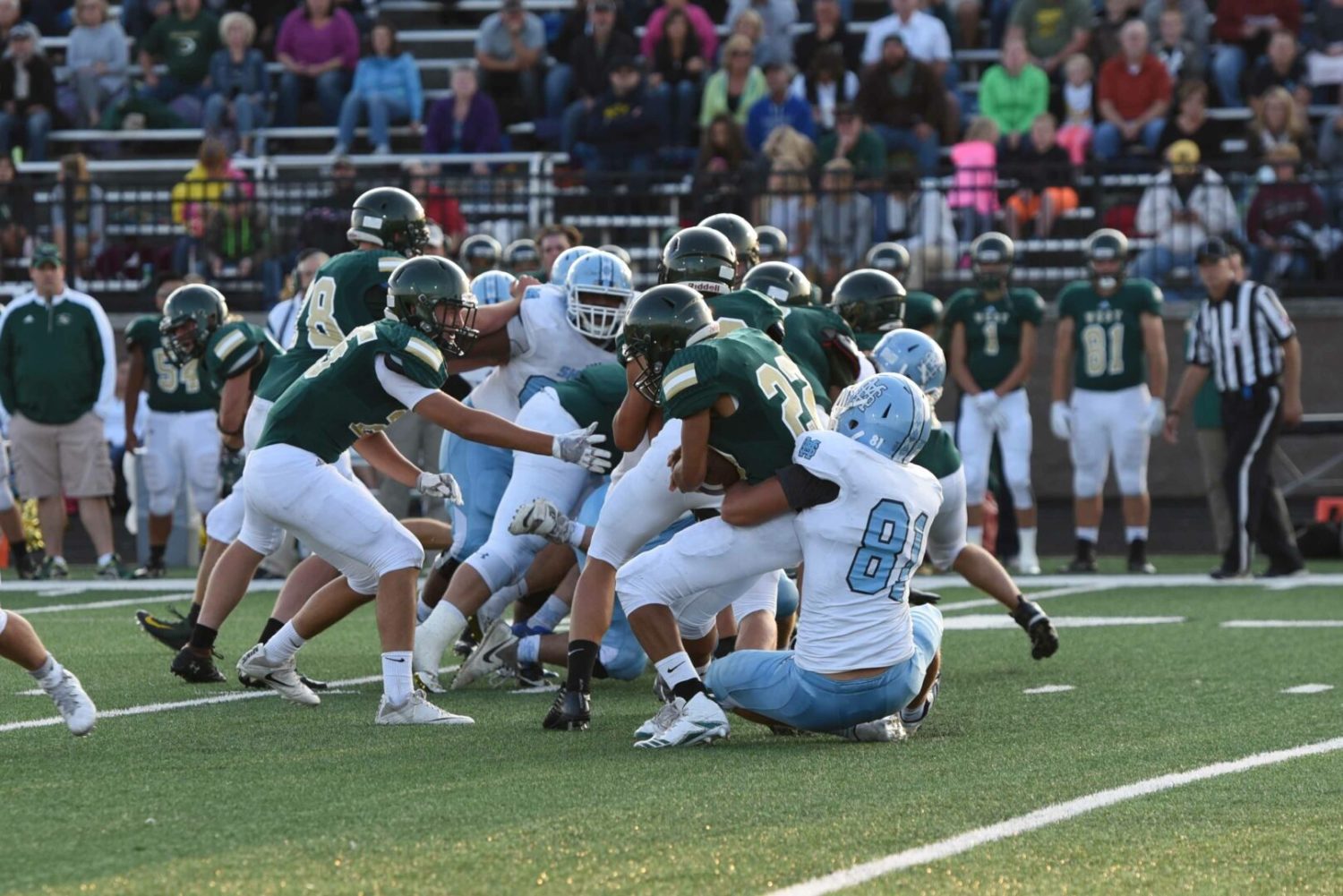 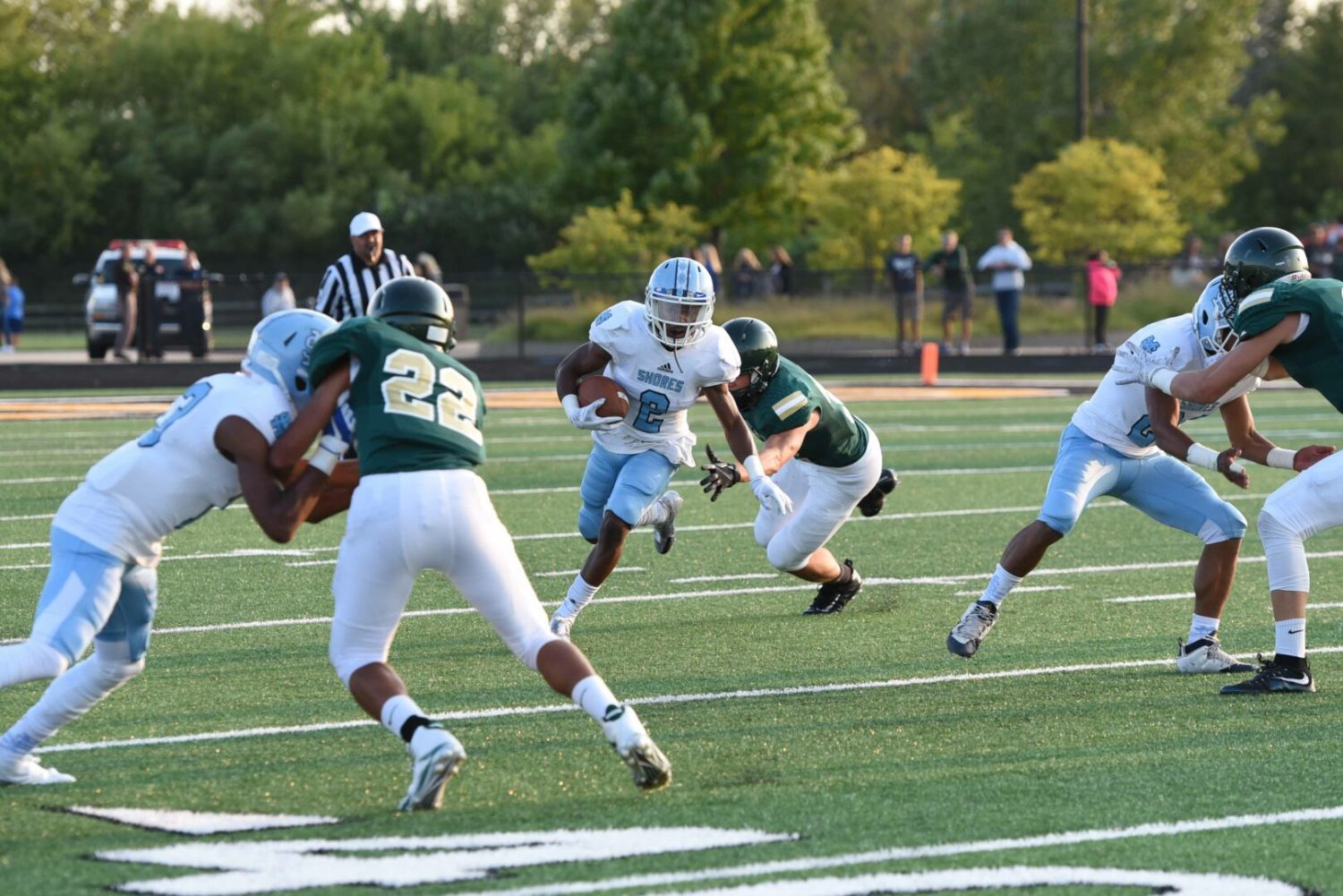 Mona Shores’ Ke’Sean Sandifer (2) looks for a seam as he returns a kickoff. (photo/Eric Sturr) 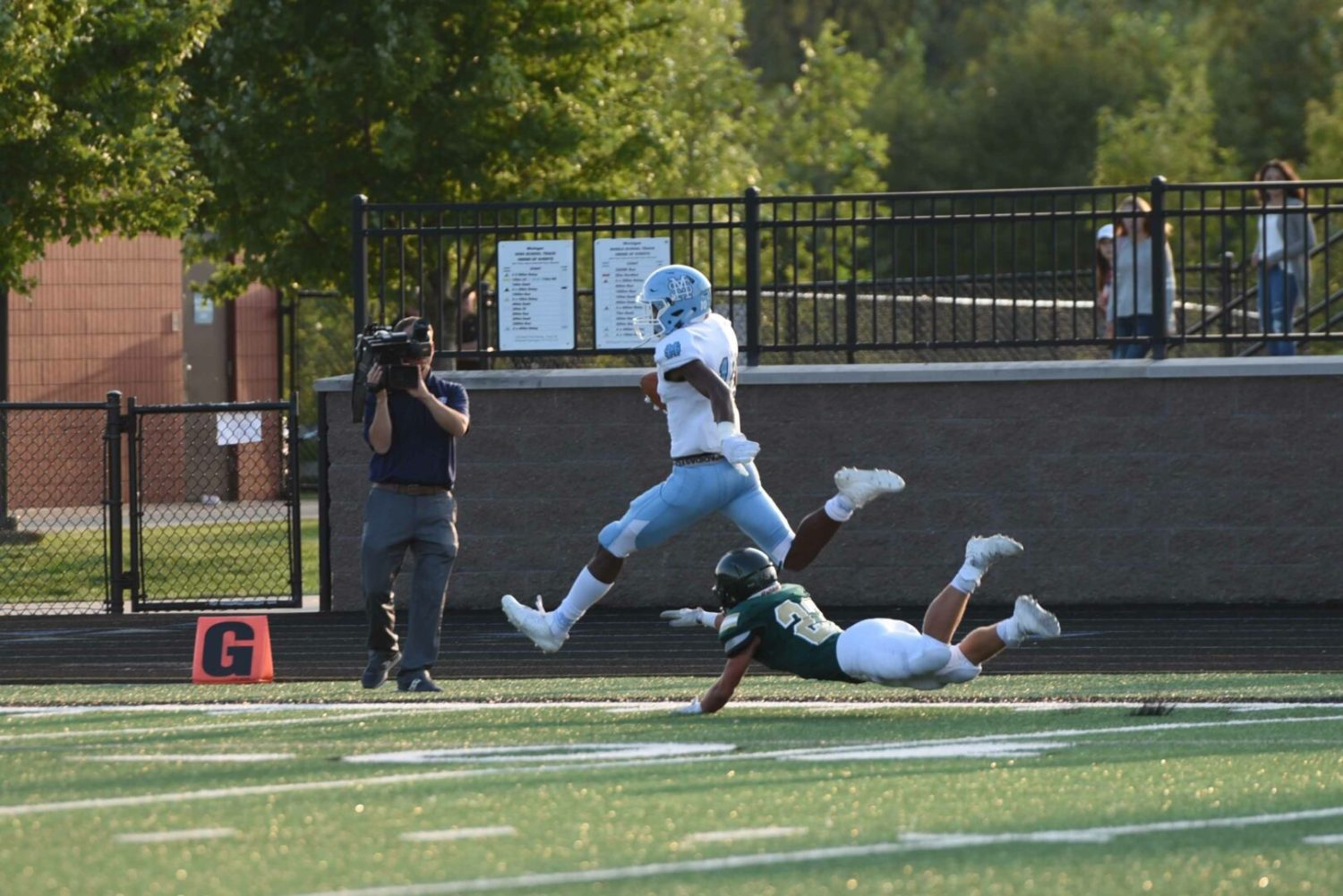 Mona Shores strikes back with a long pass play and Damari Roberson takes it to the house. (photo/Eric Sturr) 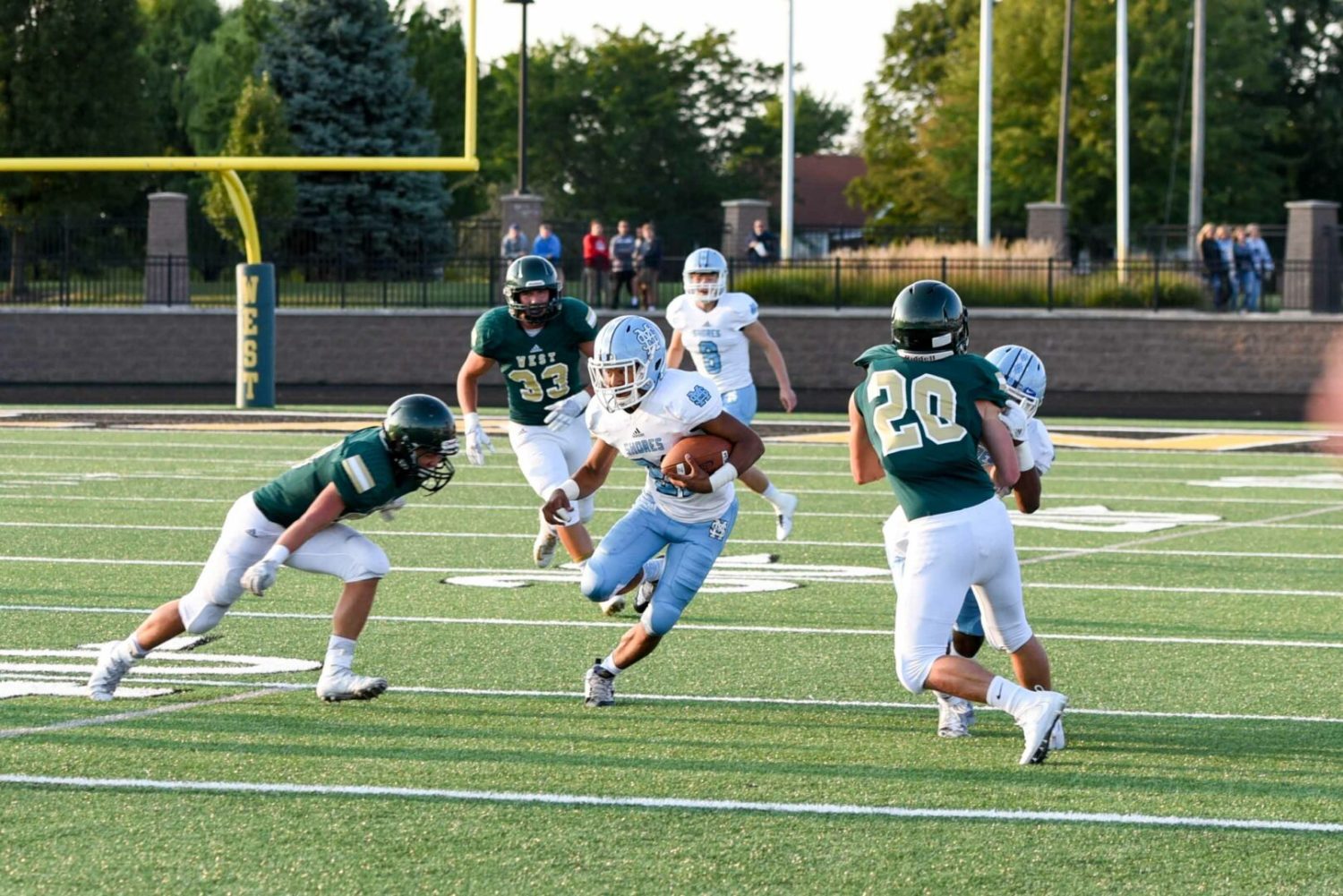 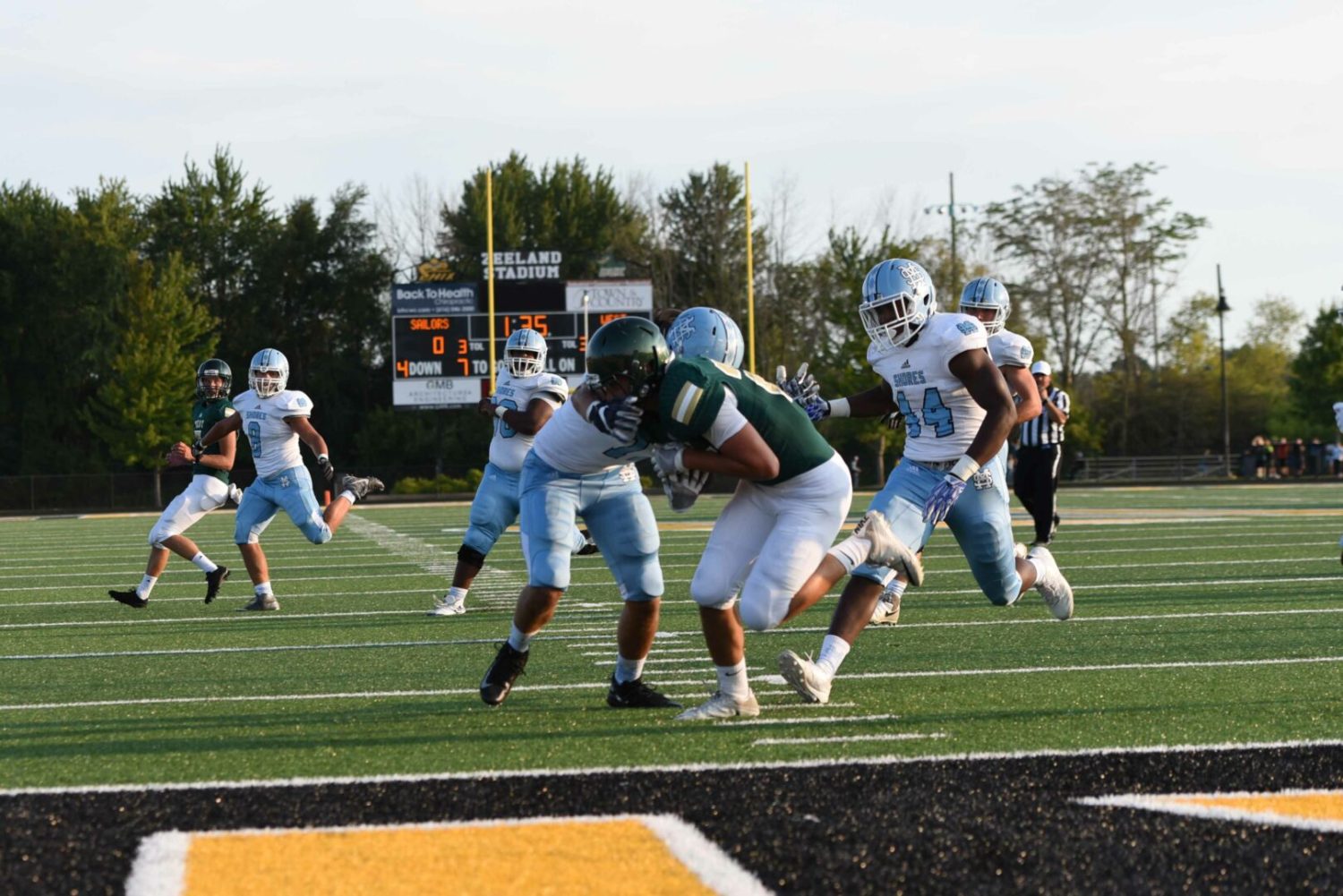 Zeeland West scores first as Zeke Buter makes the catch on the 2 yard line gets into the end zone. (photo/Eric Sturr)