MUSKEGON – The Muskegon Lumberjacks had a tough enough time catching up to the Dubuque Fighting Saints this weekend.

On Saturday they had to compete with a controversial call, as well.

The Jacks rallied from a two-goal deficit and led the Fighting Saints by one goal early in the third period.  Dubuque’s Chayse Primeu had the puck near the Muskegon net, getting ready to shoot, when the goal appeared to come off its moorings, which usually leads to a stop in play.

But the referee apparently never whistled the play dead, Primeau put the puck in the net from close range, and the game was tied 3-3.

The big crowd roared its disapproval, but the goal stood.

The Jacks could have folded up at that point, but they kept fighting. And about four minutes later, Muskegon’s Bobby Kaiser returned the favor with a close-range goal of his own, putting the Jacks back on top. 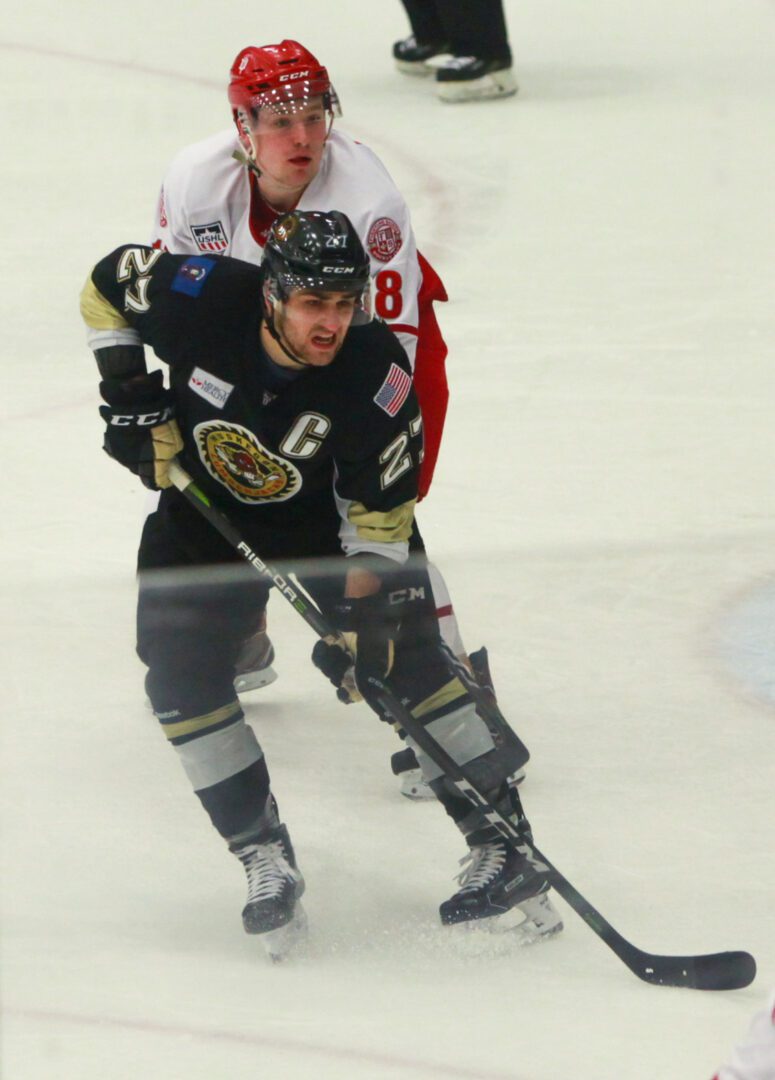 Anthony Del Gaizo looks for the puck with Dubuque’s Brendan Bushy on his back. Photo/Jason Goorman

Marc Del Gaizo added an empty-netter with 49 seconds left, sealing up an exciting 5-3 victory in front of 2.548 fans at L.C. Walker Arena.

The Lumberjacks improved to 24-20-2 on the season and remained in fourth place in the USHL’s Eastern Conference standings with 50 points. They are only three points behind Dubuque and Youngstown, who are now tied for second place.

The Jacks will resume play with a 2:05 p.m. game on Sunday in Plymouth, Michigan against Team USA.

“I thought the whistle was blown before the puck went in, and the replay looked like it wasn’t a goal,” said Kaiser about the disputed play. “It didn’t affect us. We kept the pressure on them. We were not giving up and we powered through it.”

The Jacks showed a lot of determination for the second straight night against Dubuque.

On Friday they fell behind 3-0 in the first period, came back and tied the game twice, but ended up falling 5-4 after surrendering a late shorthanded goal.

On Saturday they trailed 2-0 after one period, fought back and took the lead, and this time ended up with the victory.

While they got a win out of the two-game series, Muskegon Coach John LaFontaine was not pleased with having to come back so often. 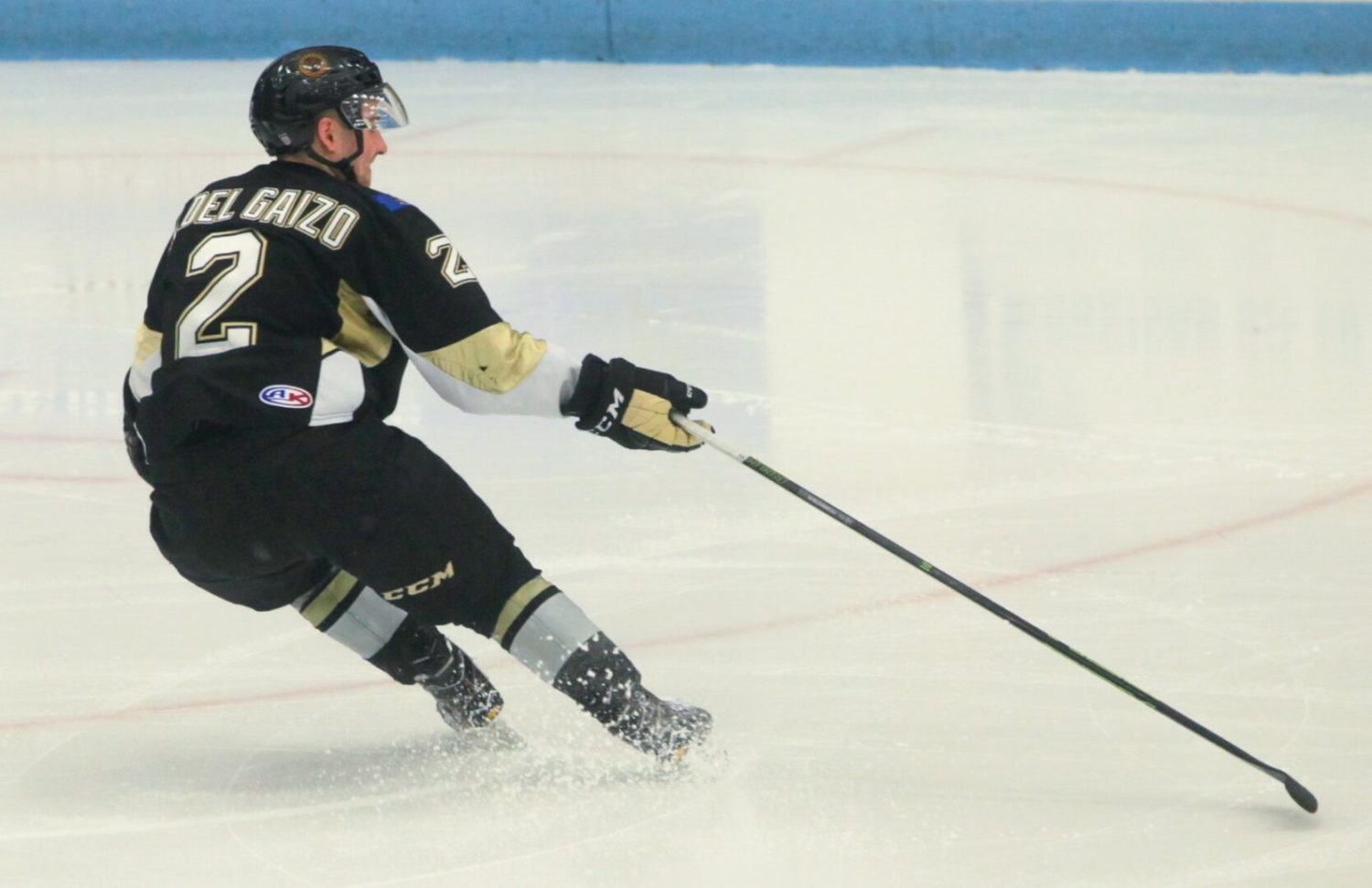 Muskegon’s Marc Del Gaizo gets back on defense. Photo/Jason Goorman

Dubuque collected first-period goals from Primeau and Dalton Hunter and led 2-0 at the first break.

The Jacks came alive in the second period, outshooting the Fighting Saints 14-5, and scoring three goals to take a 3-2 lead heading into the third.

Muskegon’s tallies came from Matej Pekar, who scored a power play goal at the 1:35 mark; Emilio Pettersen, who scored at 7:44; and Jachym Kondelik, who found the net at 11:58.

Pettersen’s goal came when he took a pretty spin-around pass from teammate Monte Graham, who was at the side of the net, and popped it in from the right faceoff circle.

Primeu’s disputed goal, which came on a power play, tied the game 4-4 just 36 seconds into the third  period.

While it was certainly a close call, the replay on the arena scoreboard clearly showed that the goal came off its moorings before the puck entered the net.

LaFontaine didn’t necessarily disagree with the call, due to his understanding of league rules.

“The rule is that if the shot is coming and it’s going to be in, and the net gets moved, then it can still be called a good goal,” the coach said.

Whatever the proper call was, Kaiser followed with his game-winner at the 4:38 mark of the third. He found himself alone with the puck in front of Dubuque goalie Cole Weaver and calmly poked it past him to give Muskegon a 4-3 edge.

“I finished a check in the neutral zone and caused a turnover and I found an opening,” Kaiser said.  “No one came with me in front, so I had a quick release and got it in.”

Dubuque pulled its goalie late for an extra attacker, but it backfired when Del Gaizo scored his empty-netter in the final minute, with an assist from Muskegon goalie Keegan Karki. 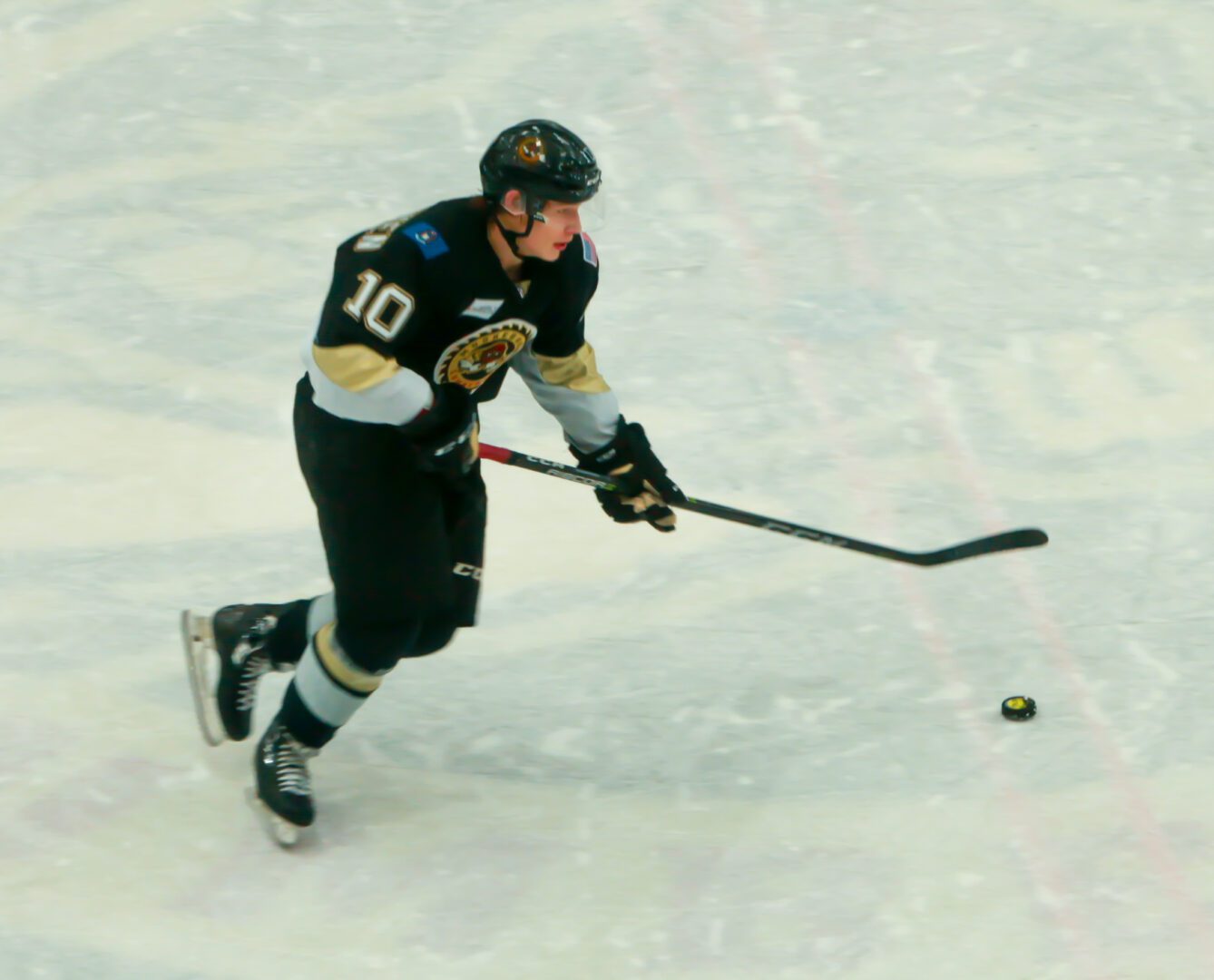 Mikael Hakkarainen pushes the puck up the ice for Muskegon. Photo/Jason Goorman 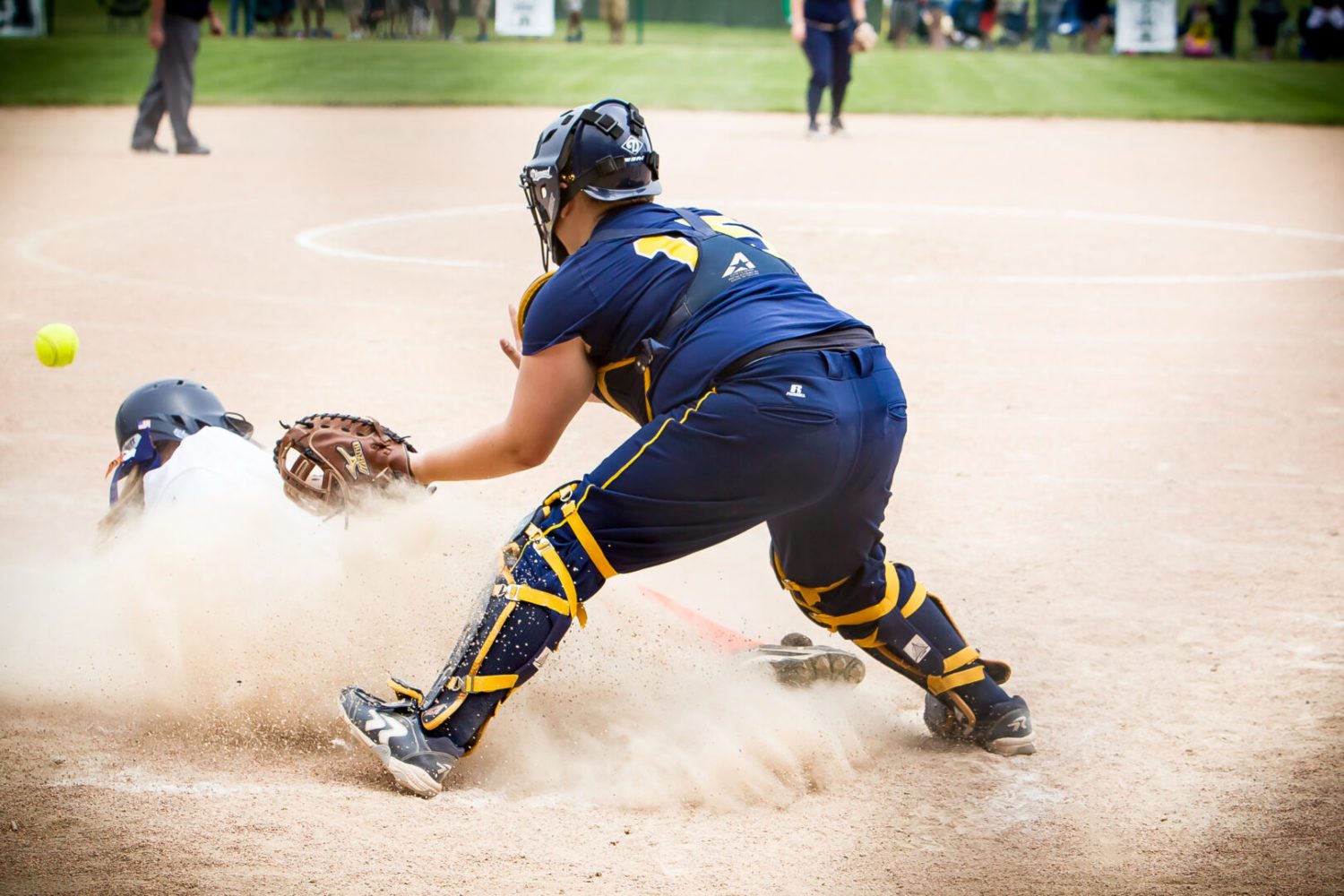 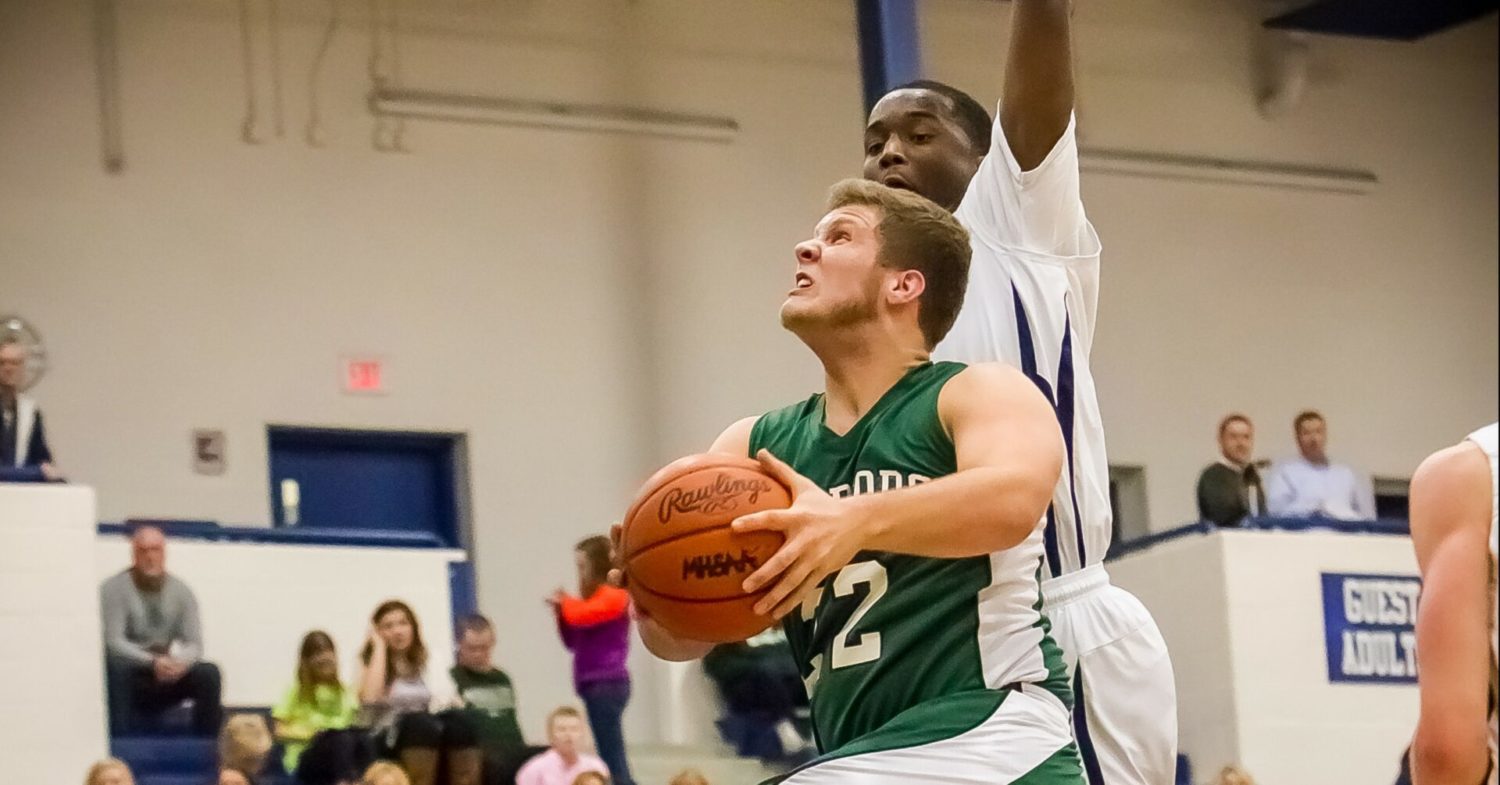