DEWITT – They say all good things must come to an end.

In high school basketball in Michigan, that’s true for all but eight teams,

and the Muskegon girls basketball team won’t be one of them this season.

The Big Reds’ historically good season came to an end on Tuesday night in a 63-45 loss to East Lansing in the MHSAA Class A state quarterfinals at DeWitt High School.

Muskegon finished the season 22-3. The Big Reds captured an O-K Black conference title, a district championship and the program’s first ever regional crown.

“We came up a little short,” Muskegon coach Rodney Walker said. “I thought our girls did a great job this season. They made some history. I liked the way they fought all the way.” 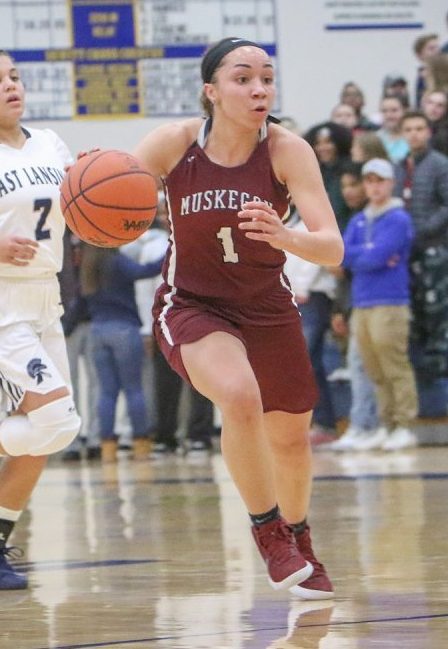 “It was amazing, we accomplished so much,” junior guard Alyza Winston said. “I’m not saying we’re satisfied, but we did good.”

The Big Reds expect the majority of their rotation to return next season, giving them high expectations.

Coach Walker was ejected from the game after receiving back-to-back technical fouls in the fourth quarter.

“I don’t know what it was from, she never really told me,” Walker said about the first technical called by the referee. “The second one, she tried to come talk to me, and I said ‘I don’t want to talk’ to her.”

East Lansing did most of its damage from the free-throw line. The Trojans shot 44 free throws, while Muskegon shot just 15.

“That kind of was a deciding factor of the game,” Walker said. “They won the game at the foul line. You can read into that however you want, but I thought we did a great job defensively tonight.”

Despite coming in with an impressive resume, Muskegon was the underdog facing undefeated East Lansing and Miss Basketball winner Jaida Hampton. 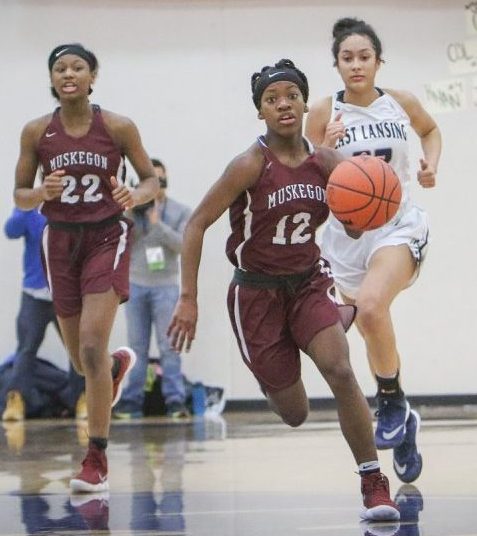 No. 12 Brianna Alexander pushes leads Muskegon up the floor while No. 22 Brionne Crews calls out the defender from behind. Photo/Joe Lane

But the Big Reds, behind a strong defensive effort from Brianna Alexander, held Hampton to just five points. The Trojans had other players step up, with three scoring in double-digits.

“Bri Alexander had great on-ball defense,” Walker said. “We felt like Bri could bother (Hampton’s) dribble and she couldn’t get to the basket.”

Muskegon was able to grab an early lead thanks to an 8-2 run in the first quarter. The Big Reds led 10-9 at the first buzzer.

East Lansing led 25-15 at halftime. The Big Reds hurt themselves with eight turnovers in the second quarter alone.

The Trojans grabbed a 15-12 advantage in the third to lead 40-27. That’s when the free-throw parade started.

East Lansing converted 21 of 25 from the line in the fourth quarter to keep Muskegon at bay and get the win. 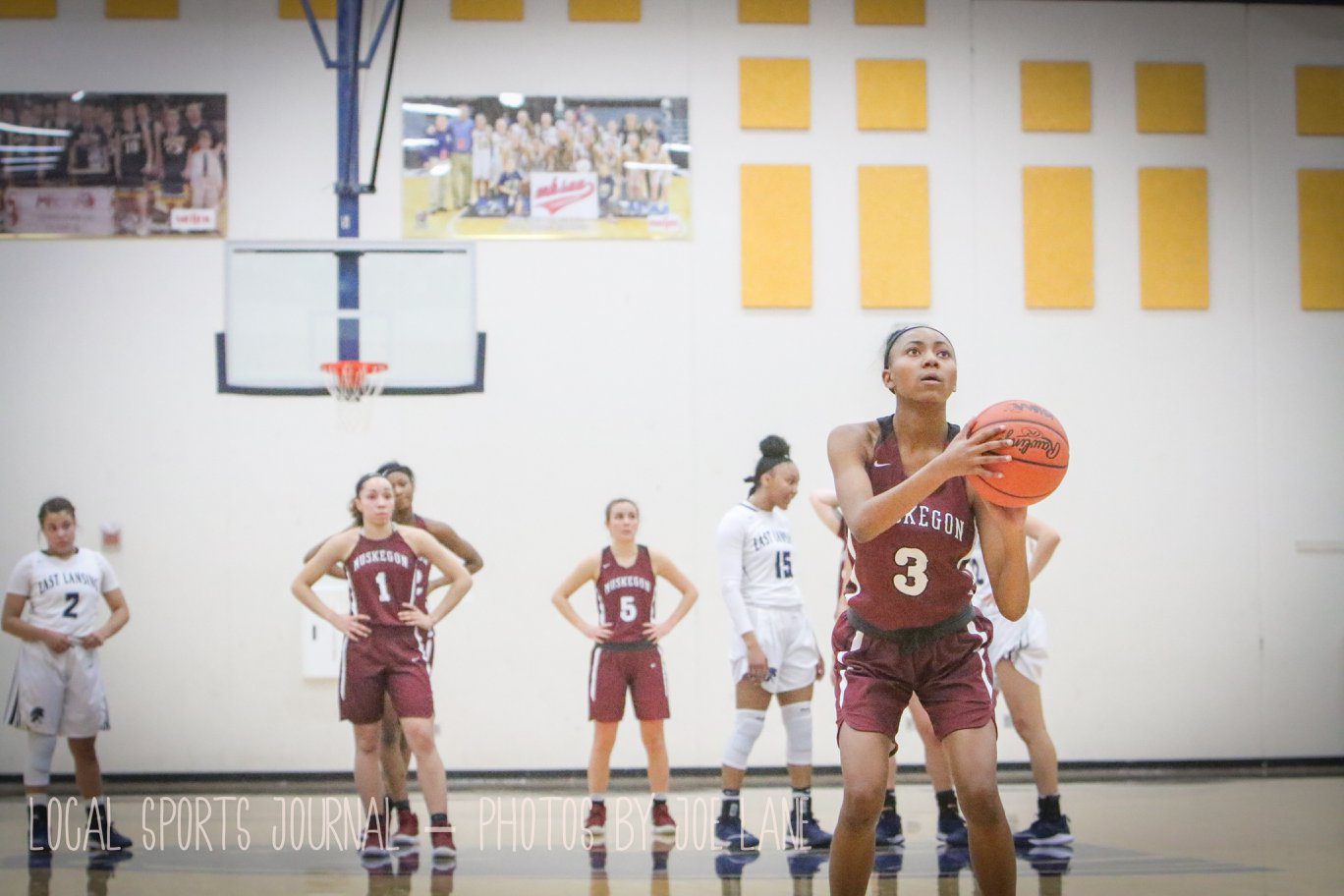 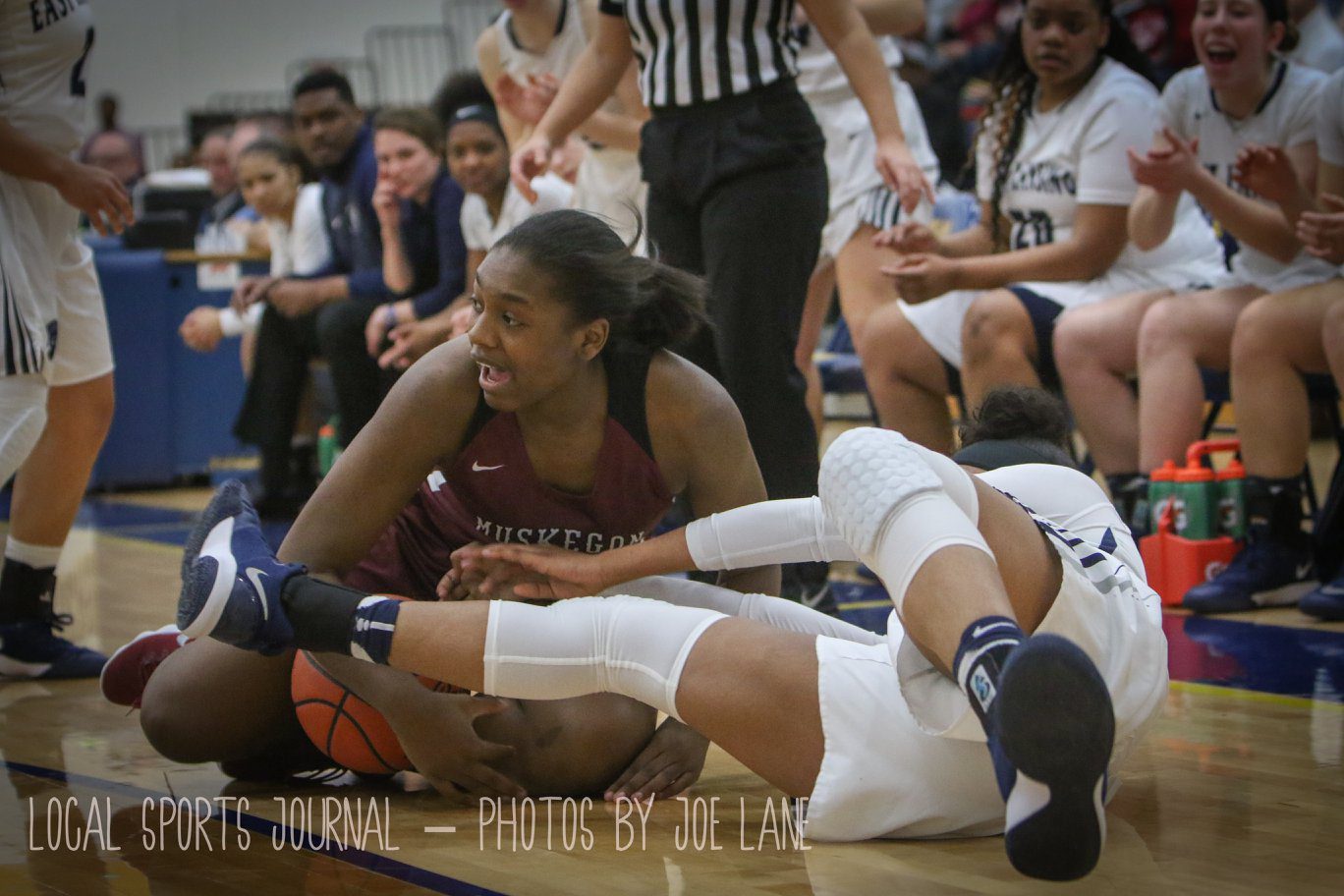 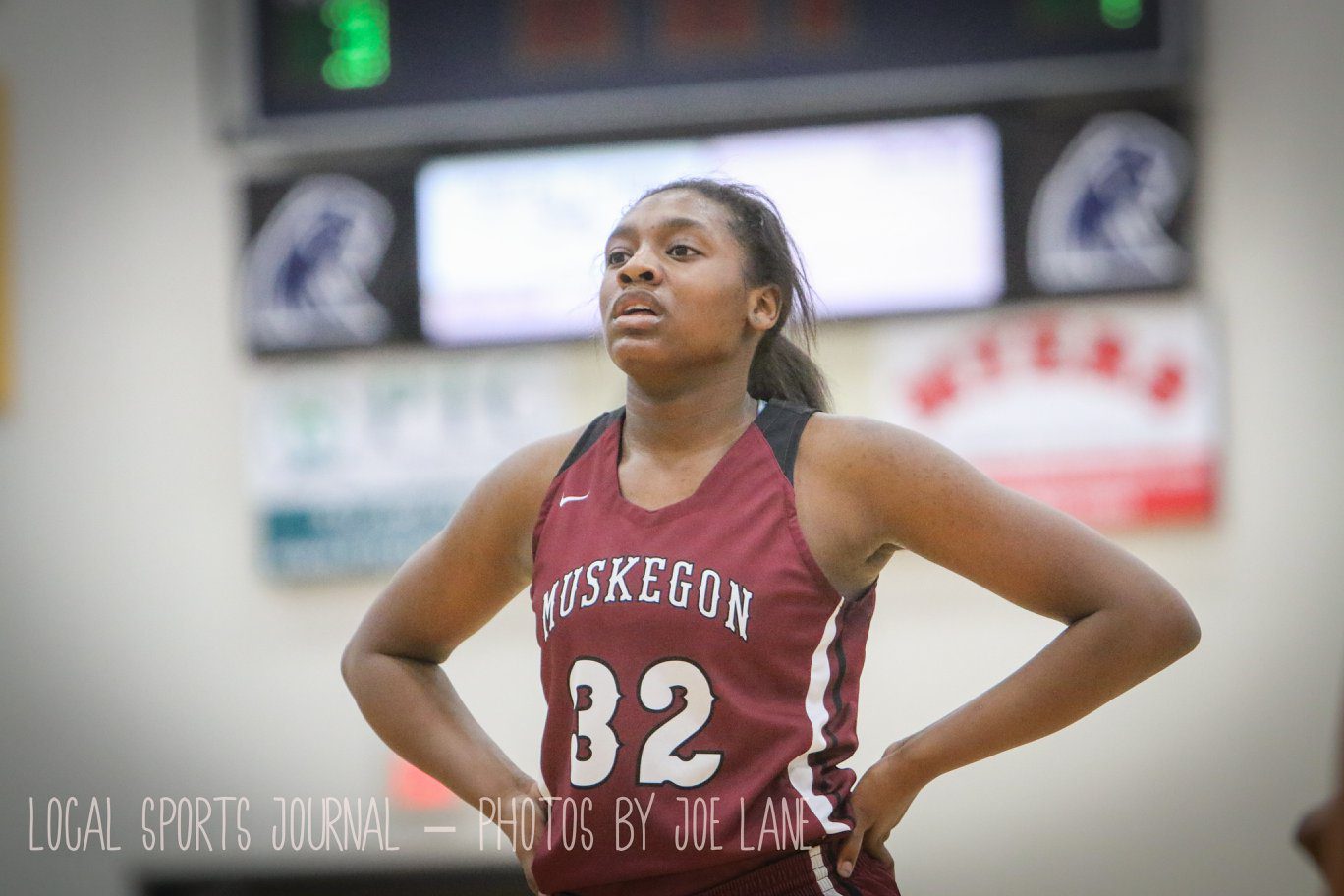 Diynasti Dowell rests during a break in play for Muskegon. Photo/Joe Lane 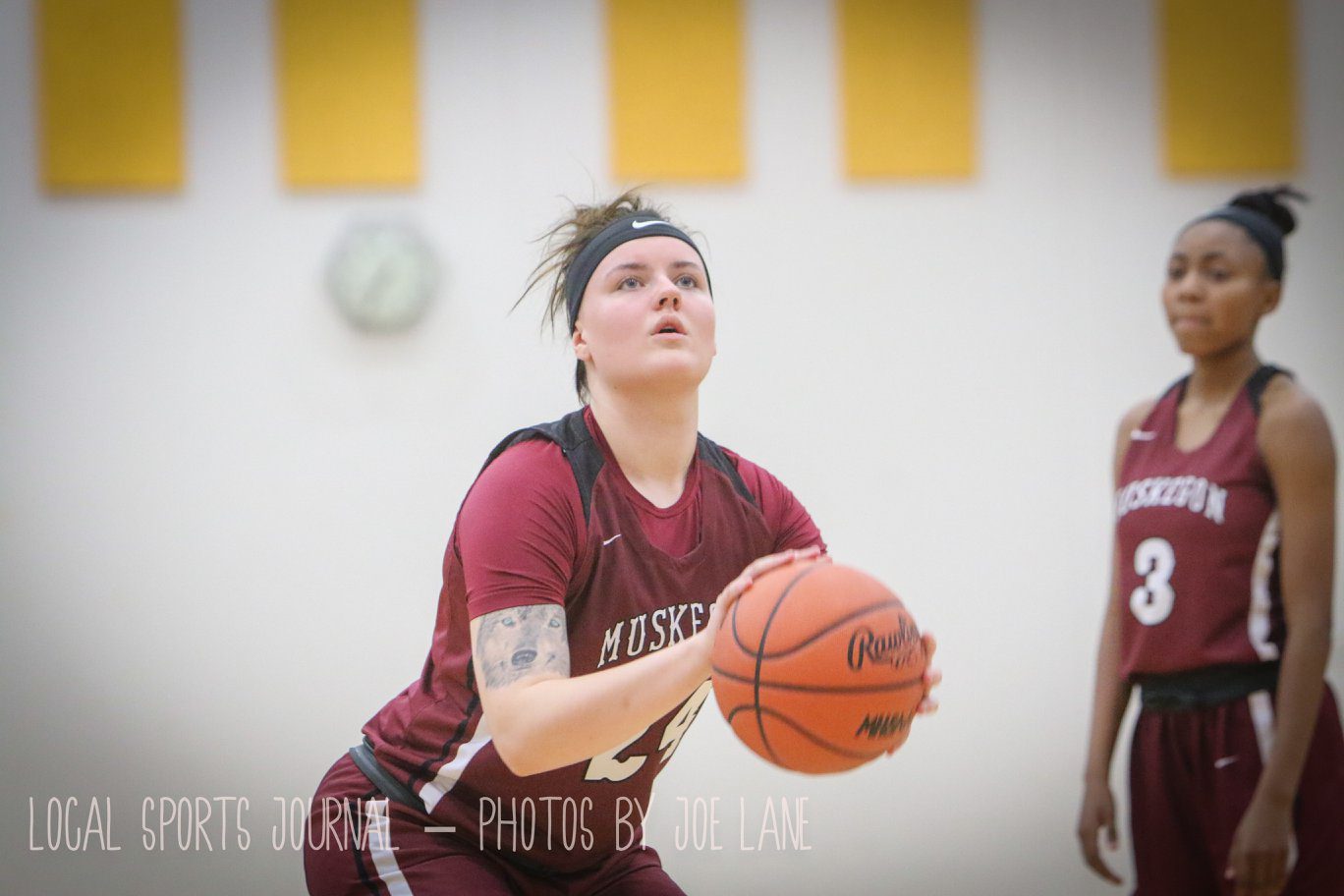 Raven Fairfield squares up at the free throw line for Muskegon. Photo/Joe Lane 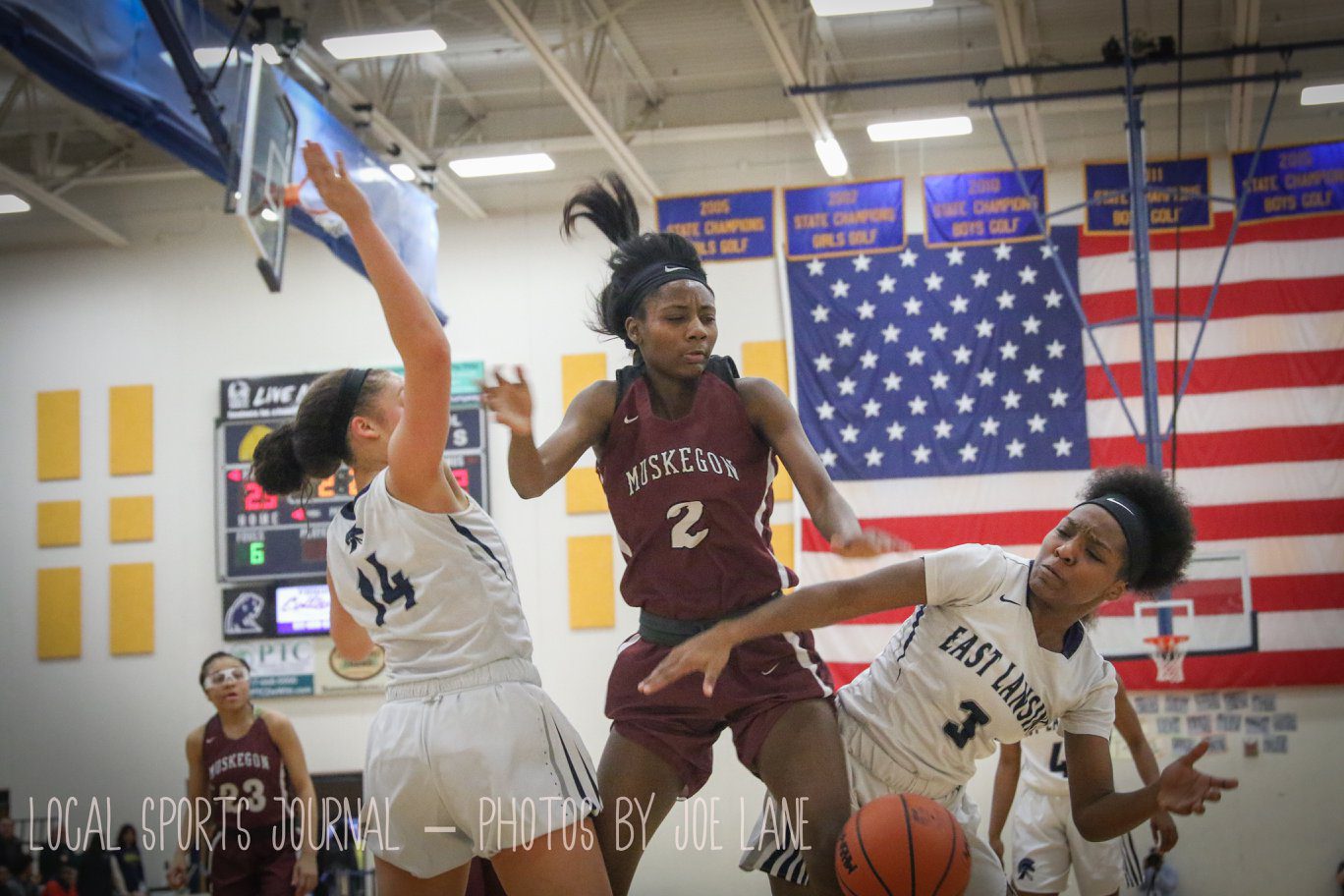 eshonna Day takes a hard hit at the basket for Muskegon. Photo/Joe Lane

Aliza Winston gets the ball knocked away on the Muskegon drive. Photo/Joe Lane 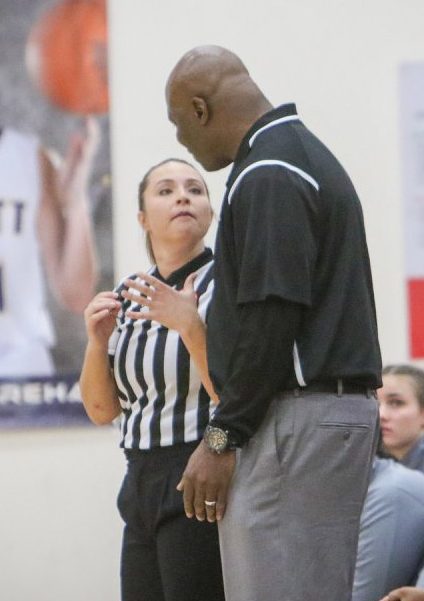 Muskegon Coach Rodney Walker speaks with a referee during a break in action. Photo/Joe Lane 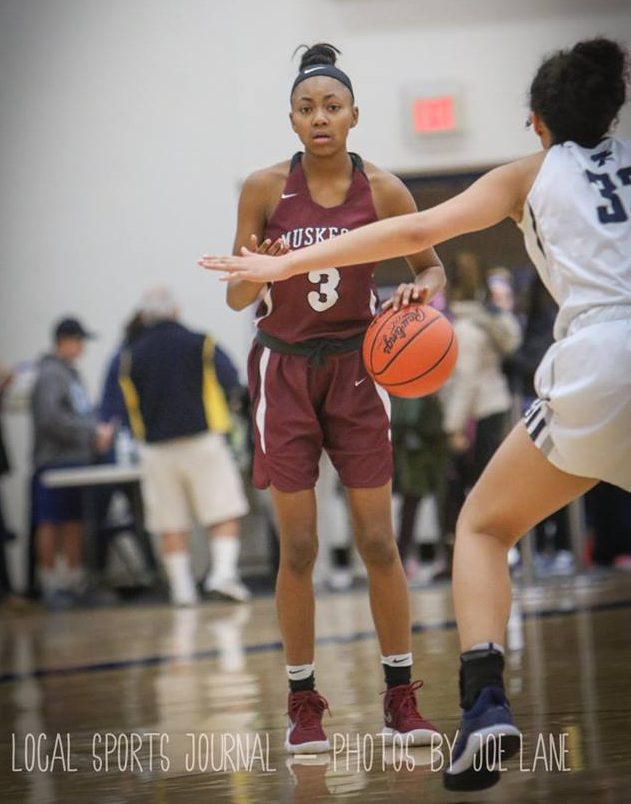 Daz’sha Day sets up the play for Muskegon. Photo/Joe Lane 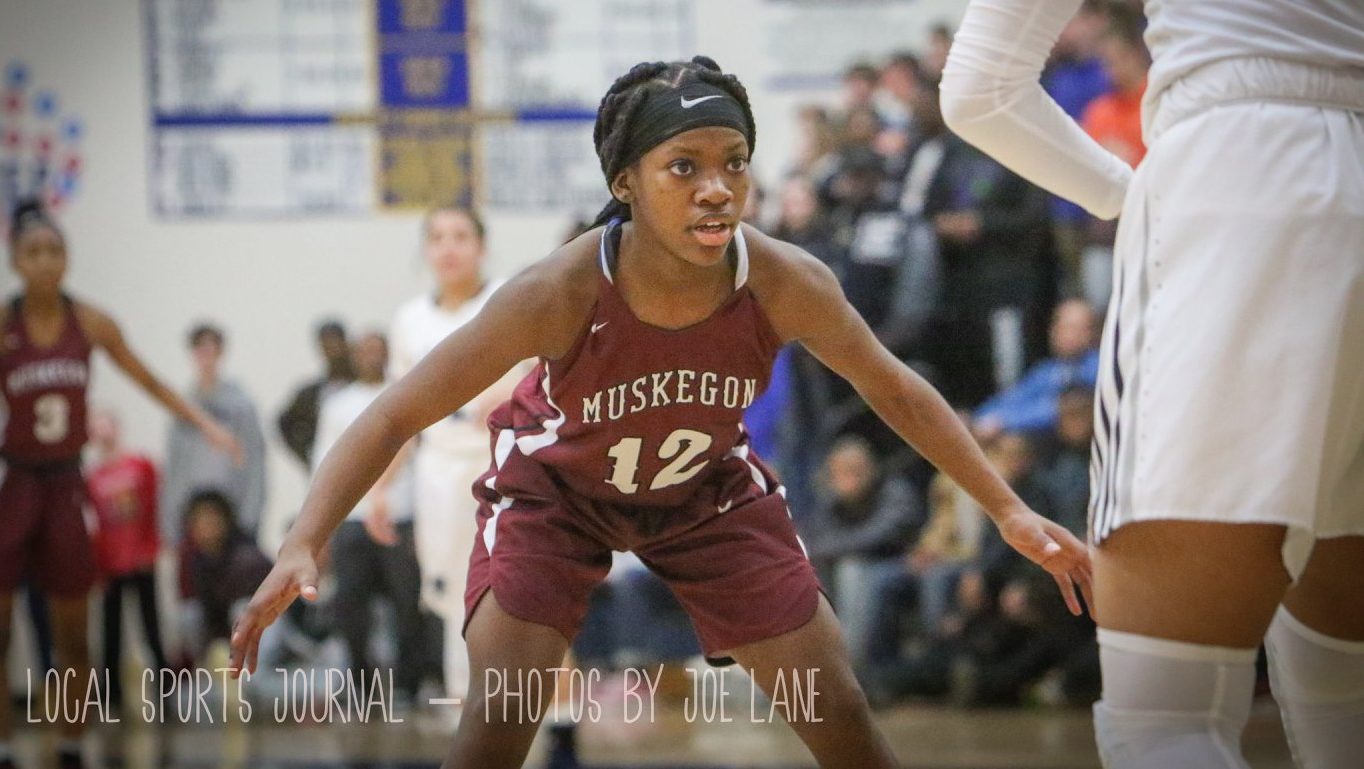 Brianna Alexander gets ready on defense for Muskegon. Photo/Joe Lane