GRAND HAVEN – Alyza Winston has now reminded everyone how she can completely dominate a big game.

If the Muskegon senior keeps playing the way she did on Monday, the other teams left in the

state tournament have something to be concerned about.

Winston, who will play at Michigan State University next season, had an uncharacteristically quiet three games in districts last week, scoring 9, 13 and 16 points. But her teammates picked up the slack and the Big Reds managed to win the title.

But Winston was definitely on her game in the Division 1 regional opener against East Kentwood on Monday, scoring 34 points, including 18 in the first half, as the Big Reds waltzed to a 67-46 victory at Grand Haven High School.

Muskegon now advances to play Hudsonville at 7 p.m. on Wednesday at Grand Haven in the regional championship game. The winner will earn a berth in the state quarterfinals. 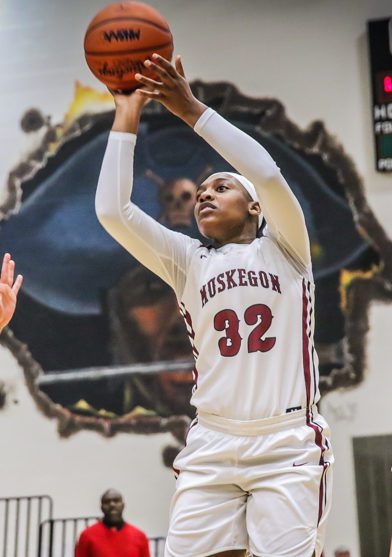 Winston showed off all her offensive skills that weren’t on display last week – her amazing speed, dazzling moves while driving the lane and weaving through traffic, and her outside shooting ability.

“I really don’t know, I just had an off week last week, I don’t know what it was, but I’m back,” said Winston, who had four 3-pointers in the game.

Muskegon Coach Rodney Walker admitted that Winston had a great performance, but thinks she can do even better.

“I think she has a whole other level, a whole other gear,” said Walker, whose team is now 19-4 on the season. “It’s really hard to stop her from getting down the floor with her speed, which is really the most unique part of her game.”

Muskegon started slowly against East Kentwood, missing its first five shots from the floor. But then Winston went to work, giving the Big Reds a big cushion in the early going.

She opened with a three-pointer, then tossed in eight more points in the first quarter, and the Big Reds led 18-4 at the first buzzer.

East Kentwood kicked up its heels early in the second quarter, going on an 8-0 run to pull within 23-17 with 4:35 left in the half.

But Winston quickly extinguished the fire, hitting a driving layup, a three-pointer and a jumper over the next 3 1/2 minutes and Muskegon went into halftime with a 35-21 lead. 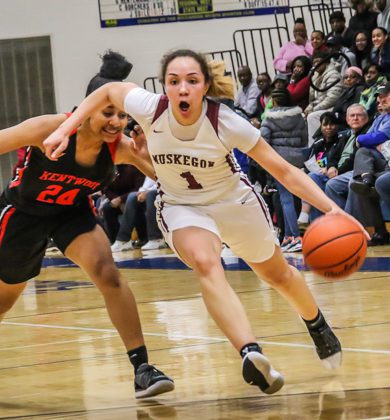 The game never got close in the second half, when Winston scored 16 points, including 11 in the fourth quarter. Dashonna Day also got hot, scoring all of her 11 points in the final two quarters.

Diynasti Dowell totaled 12 points for the Big Reds, which included a pair of first-half triples.

The victory avenged the Big Reds’ one-point loss to East Kentwood in their season opener. It also extended their winning streak to nine games, which is a very good sign at tournament time.

Muskegon advanced all the way to the state quarterfinals last year, and the way things are shaping up, the Big Reds may go even farther in the next two weeks.

“We’re really determined, we have the team to do it,” Winston said. “We can really do it this year, take it all the way.”

“The girls being here last year helps us out, and they are just seizing the moment right now,” Walker said. “And we have some seniors who don’t want the next game to be their last game.” 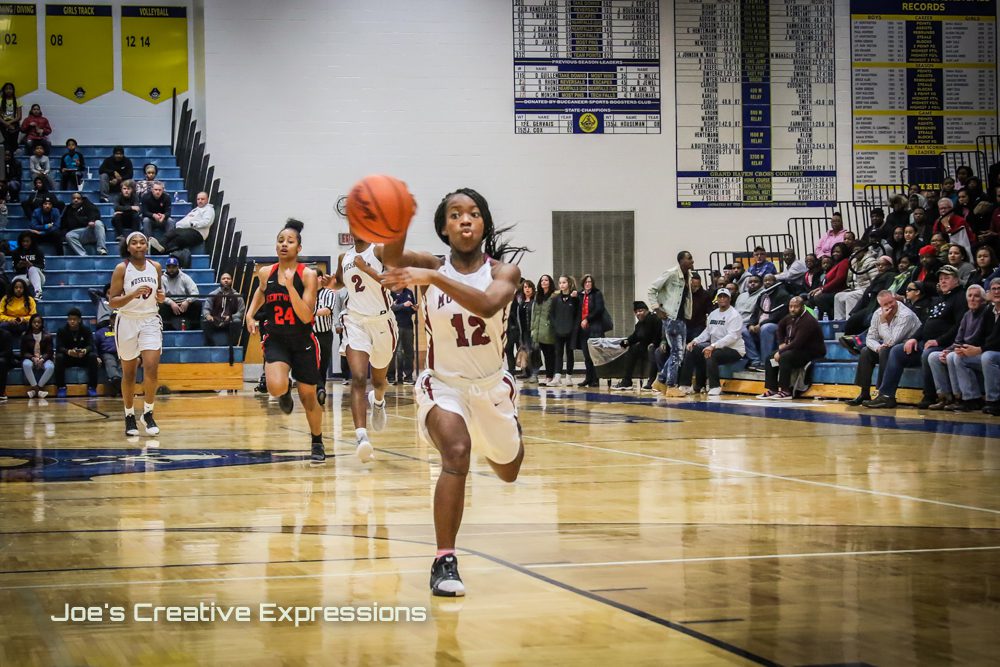 Brianna Alexander makes a pass to the corner for Muskegon. Photo/Joe Lane 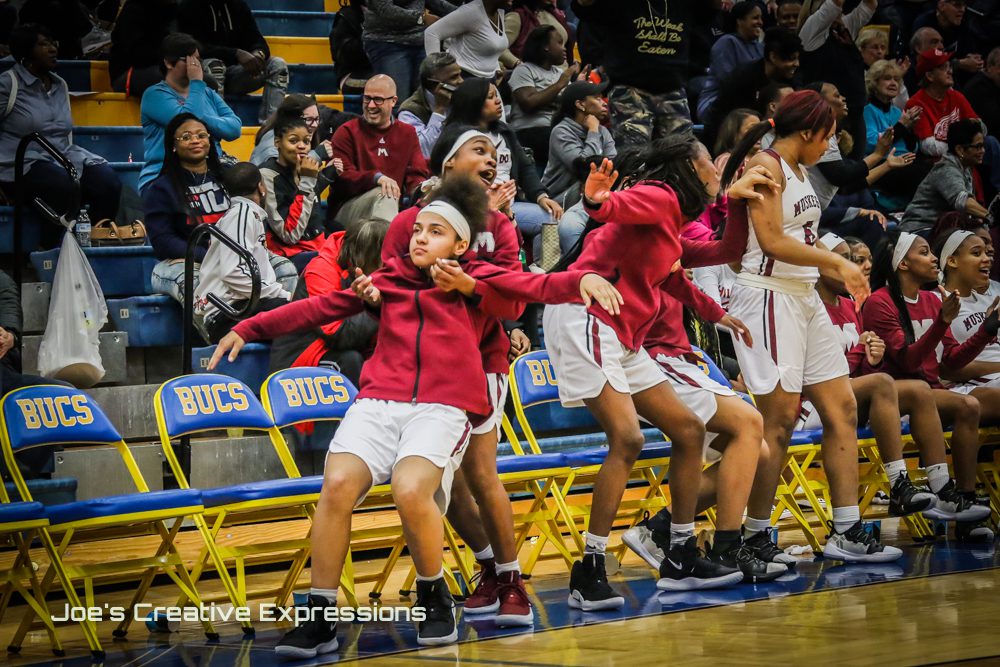 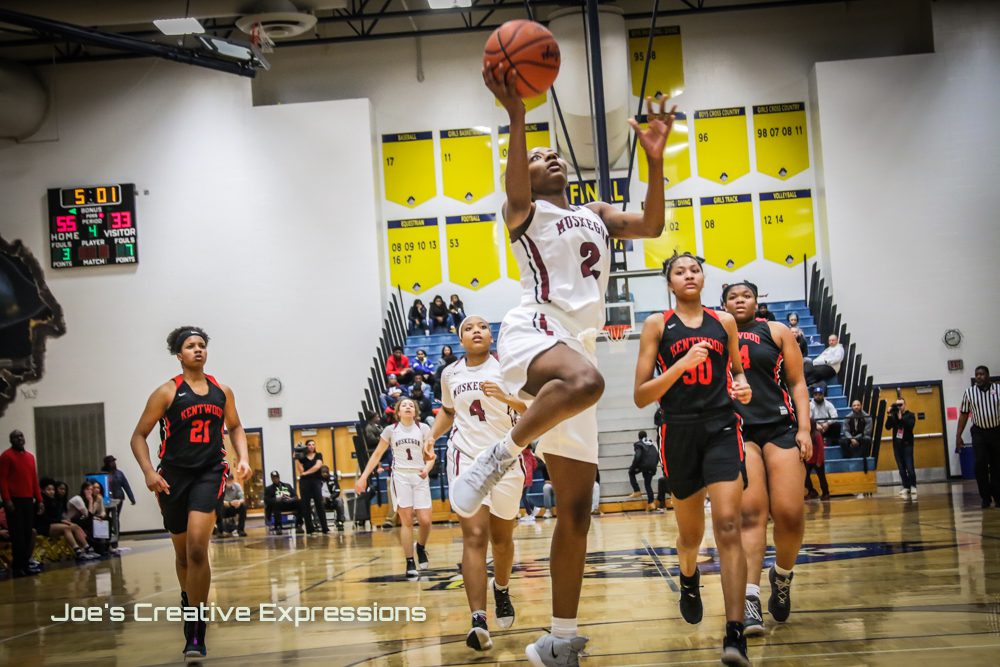 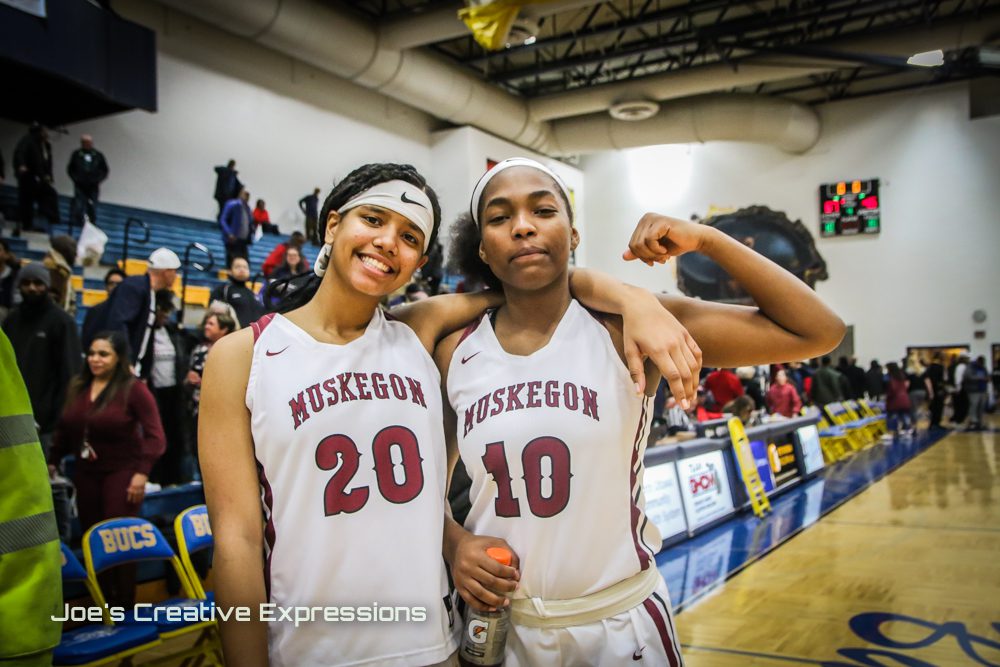 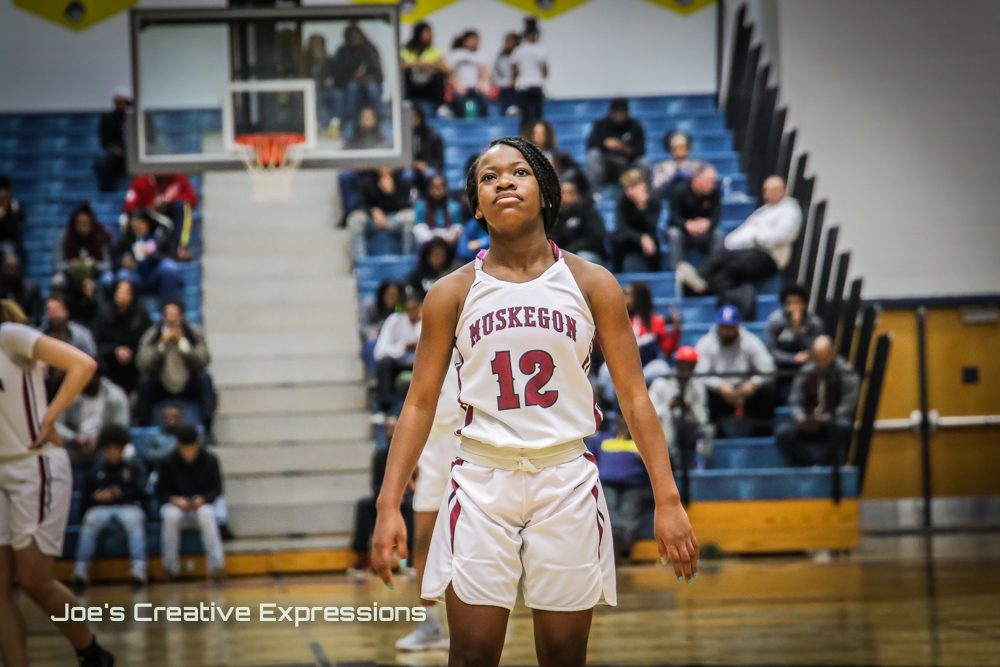 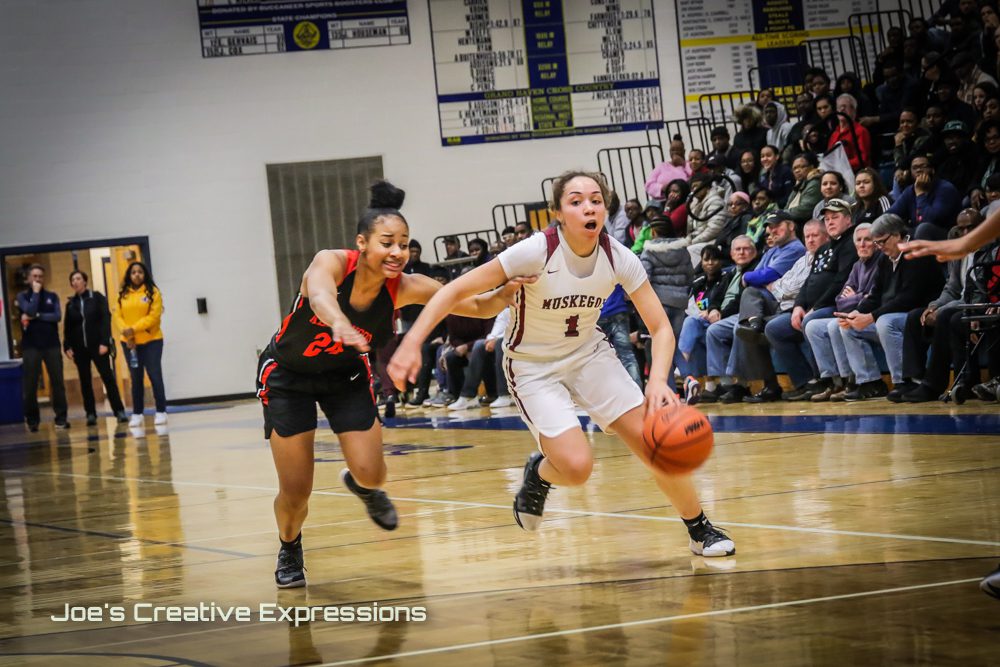 Alyza Winston on the drive for Muskegon. Photo/Joe Lane 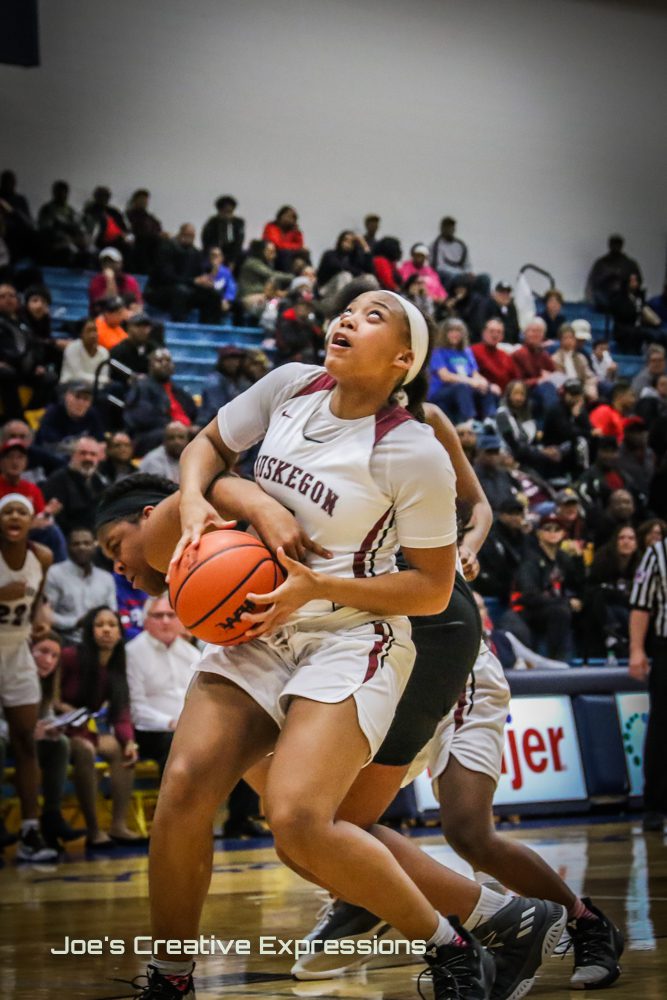 Nia MIskel tries to go up for the shot against the East Kentwood defense. Photo/Joe Lane 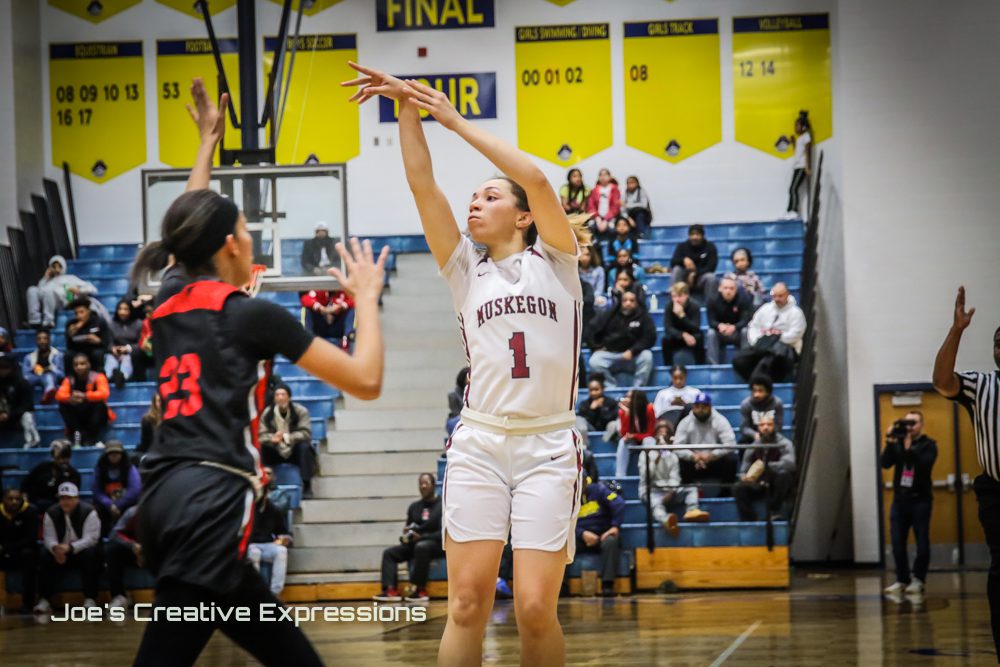 Alyza Winston follows through after the shot for Muskegon. Photo/Joe Lane 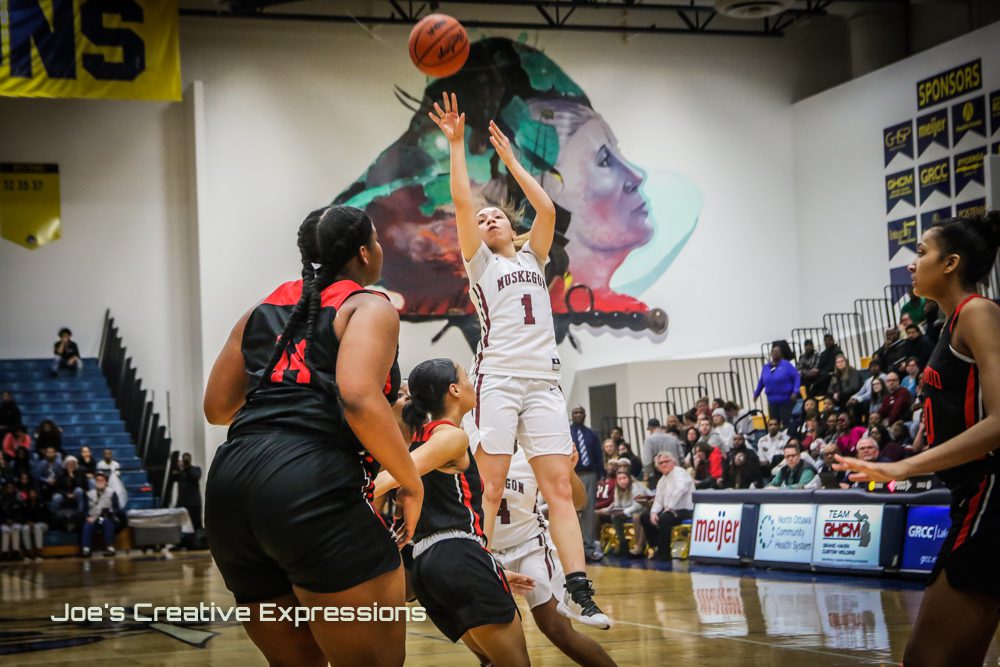 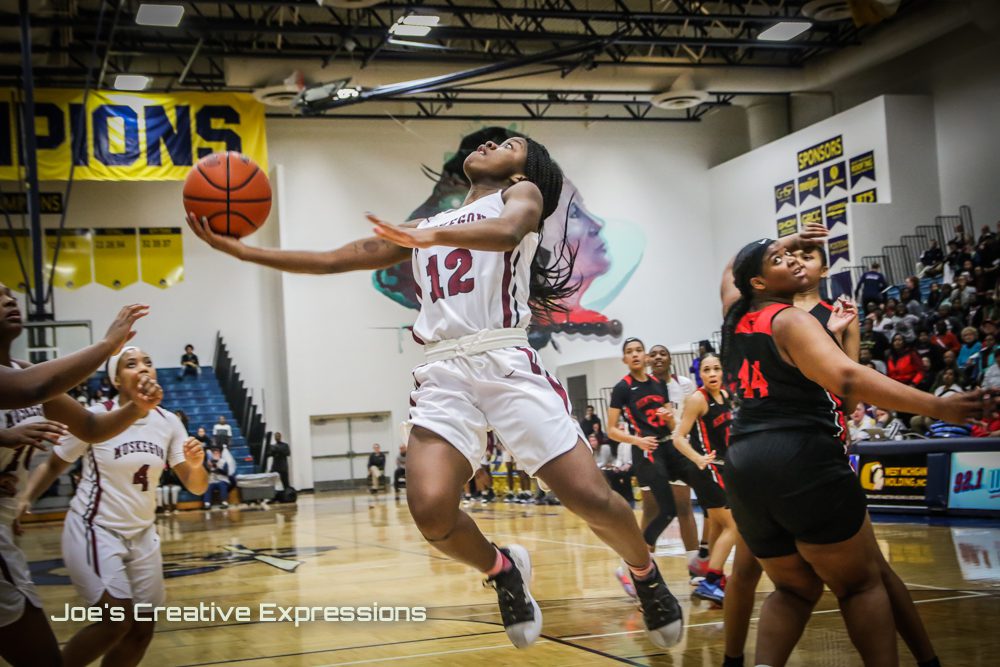 Brianna Alexander scoops under the hoop for Muskegon. Photo/Joe Lane 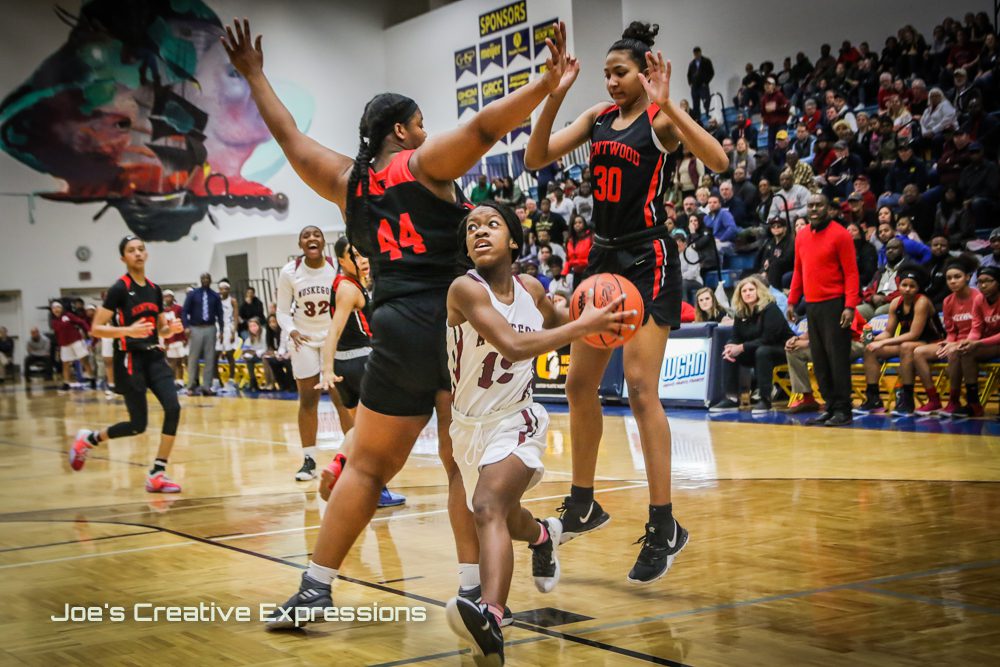 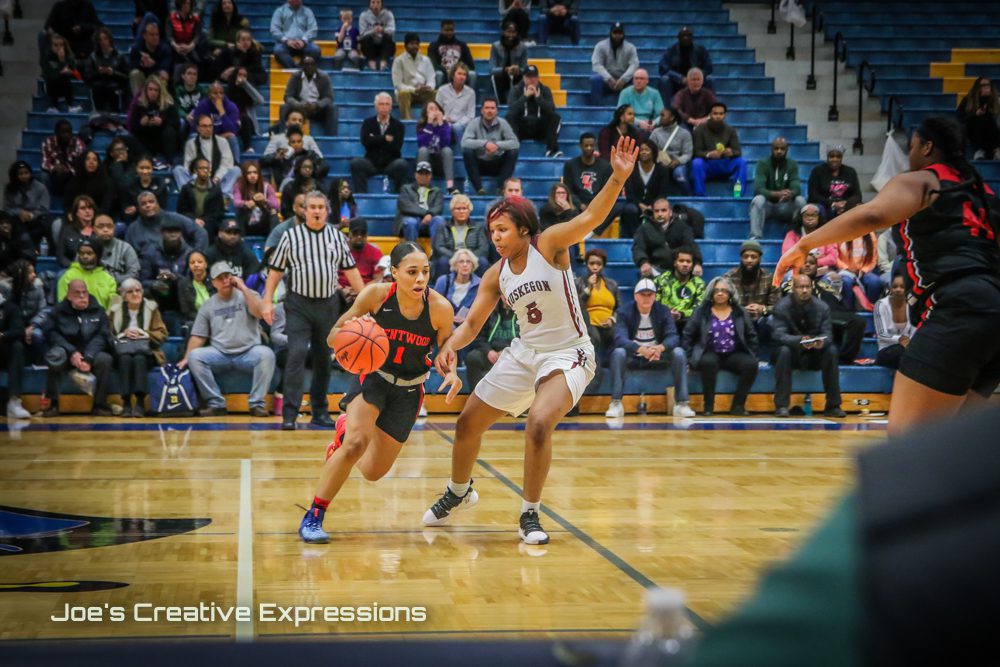 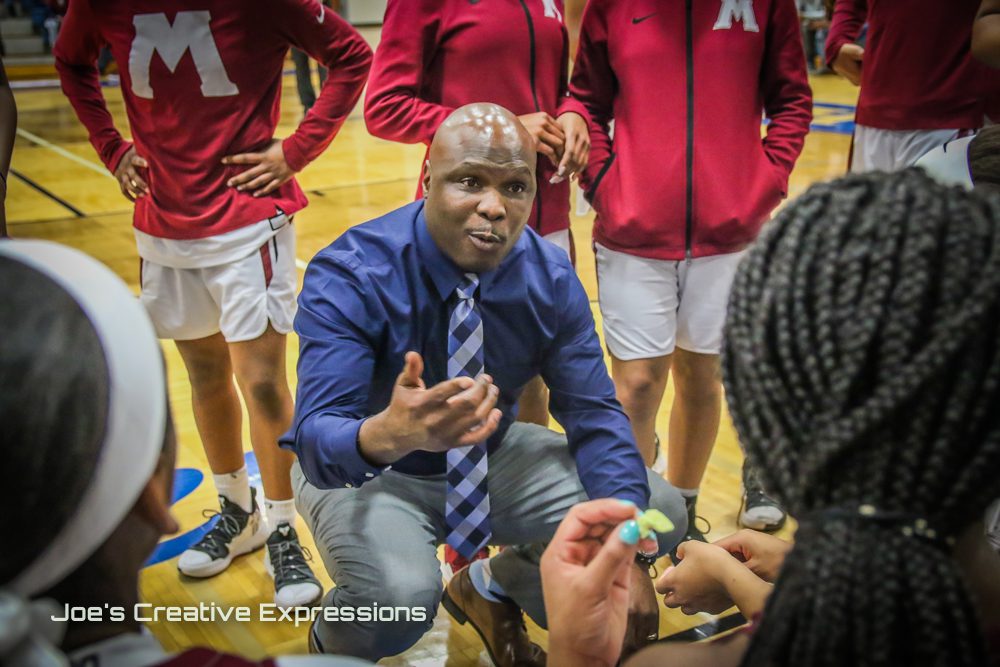 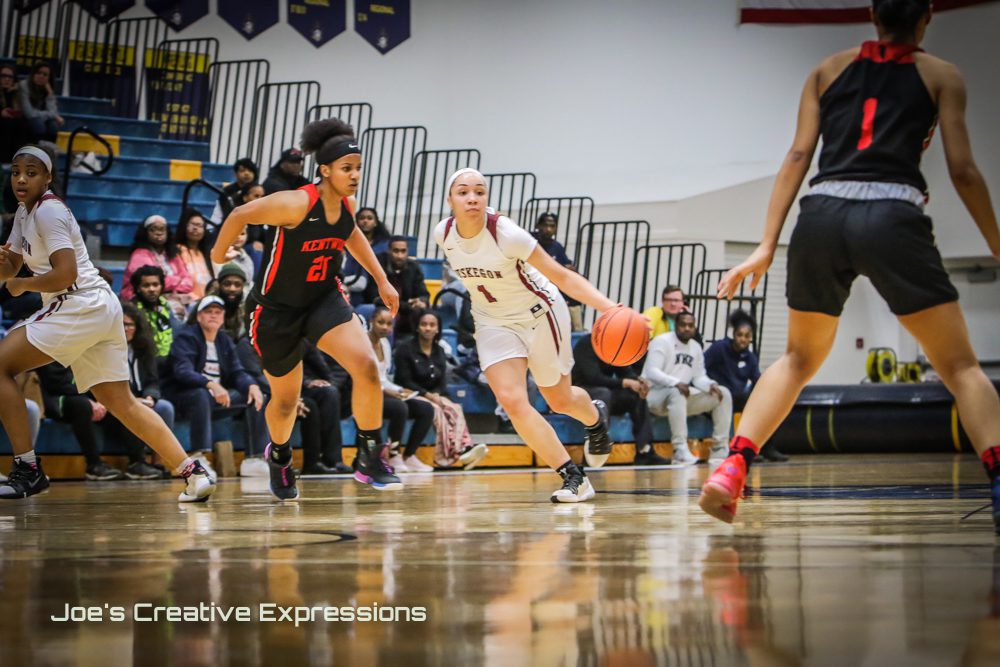 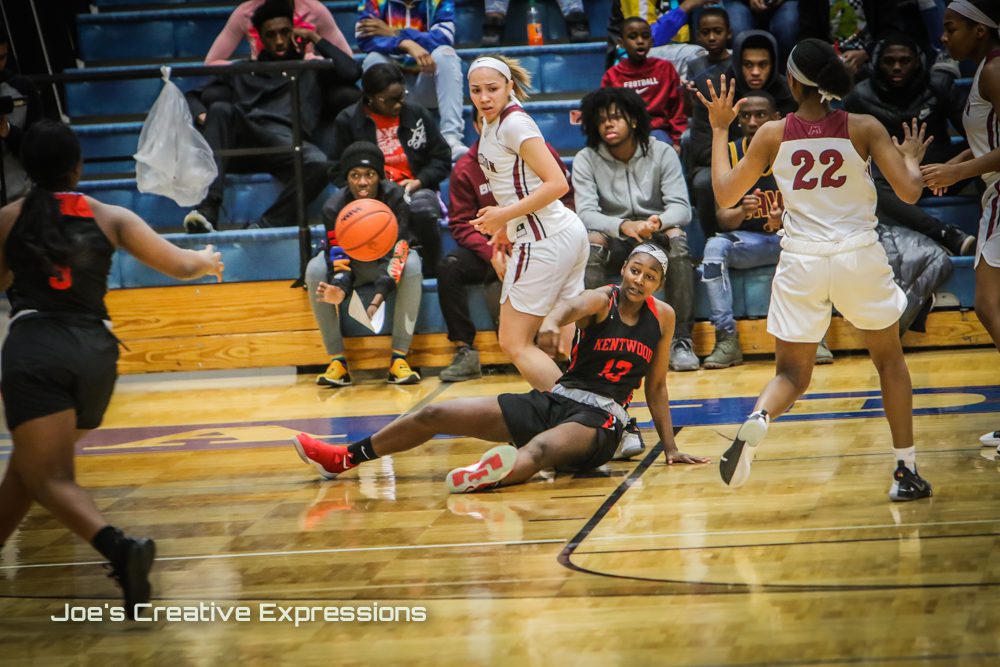 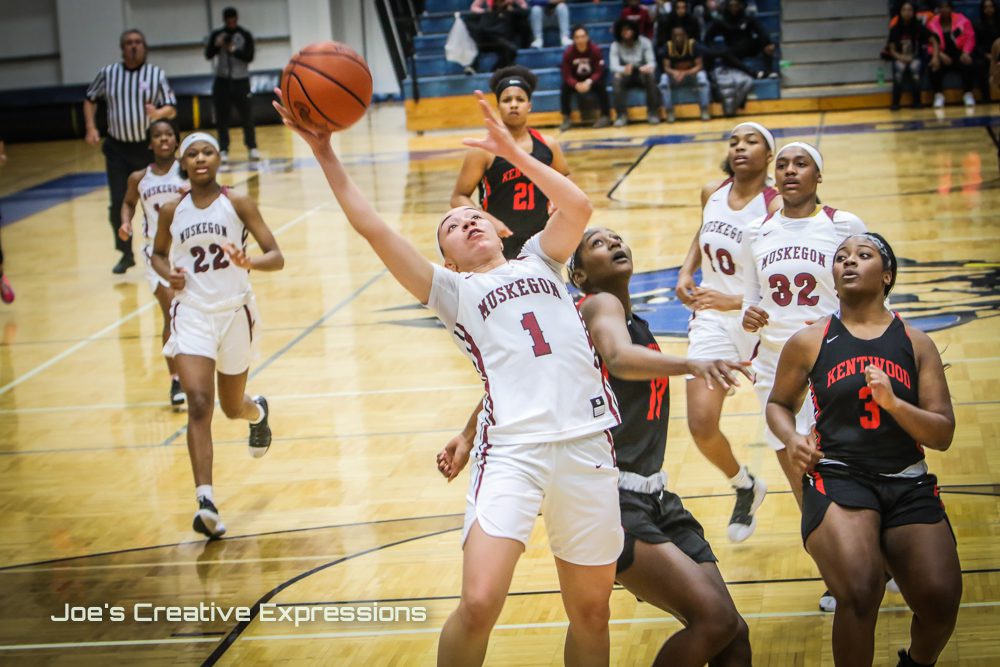 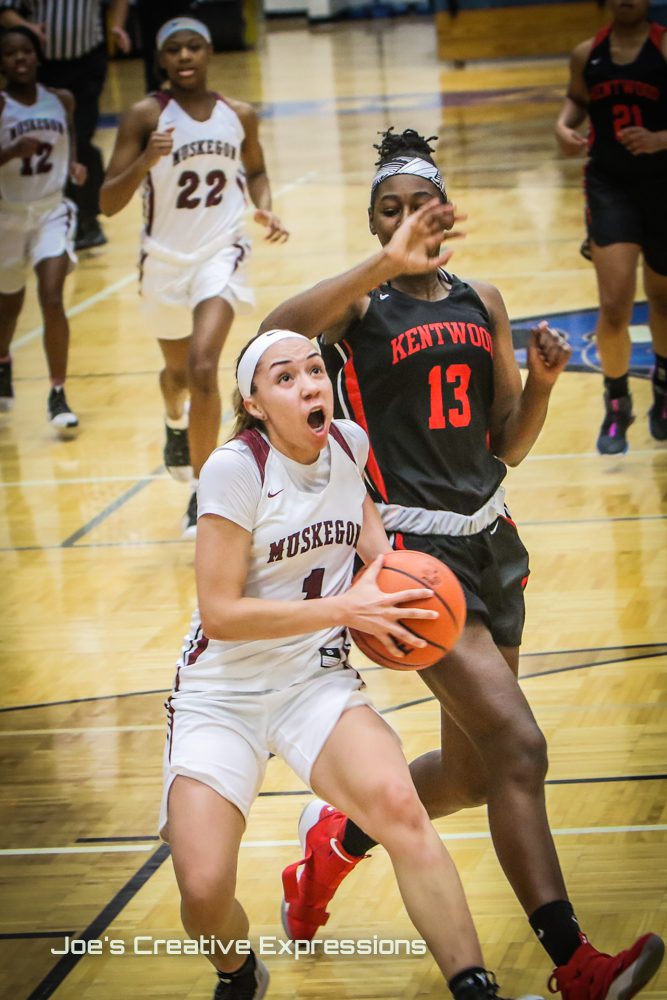 Alyza Winston takes the ball to the hoop for Muskegon. Photo/Joe Lane 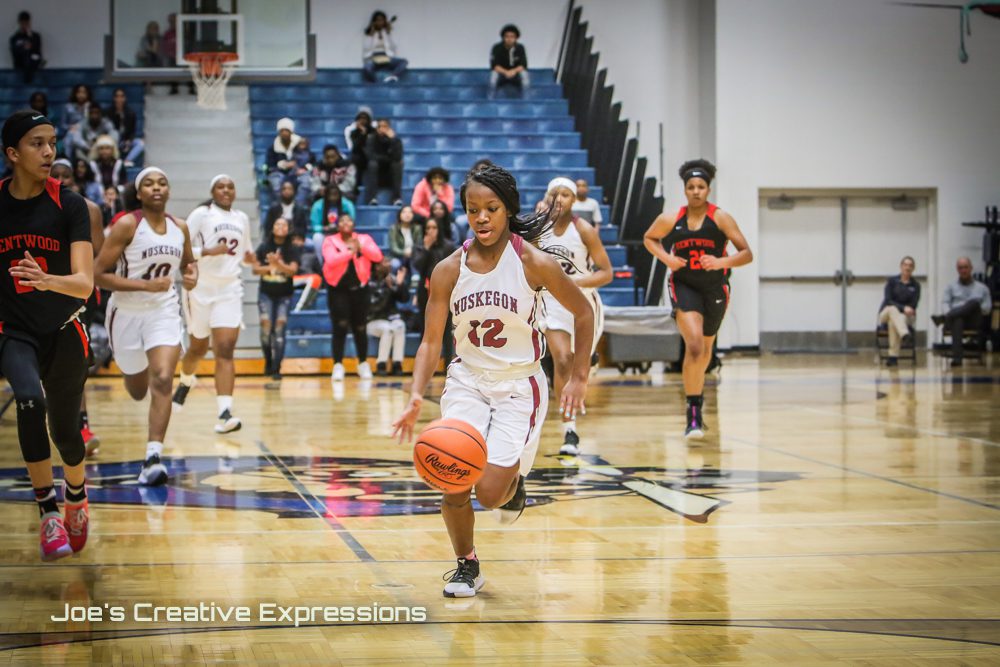 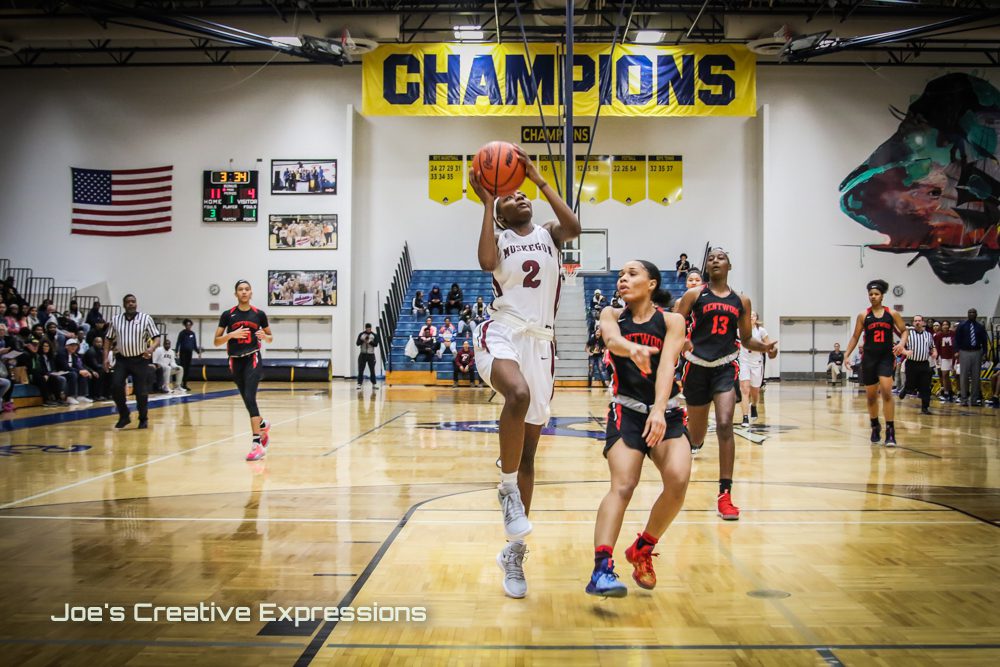 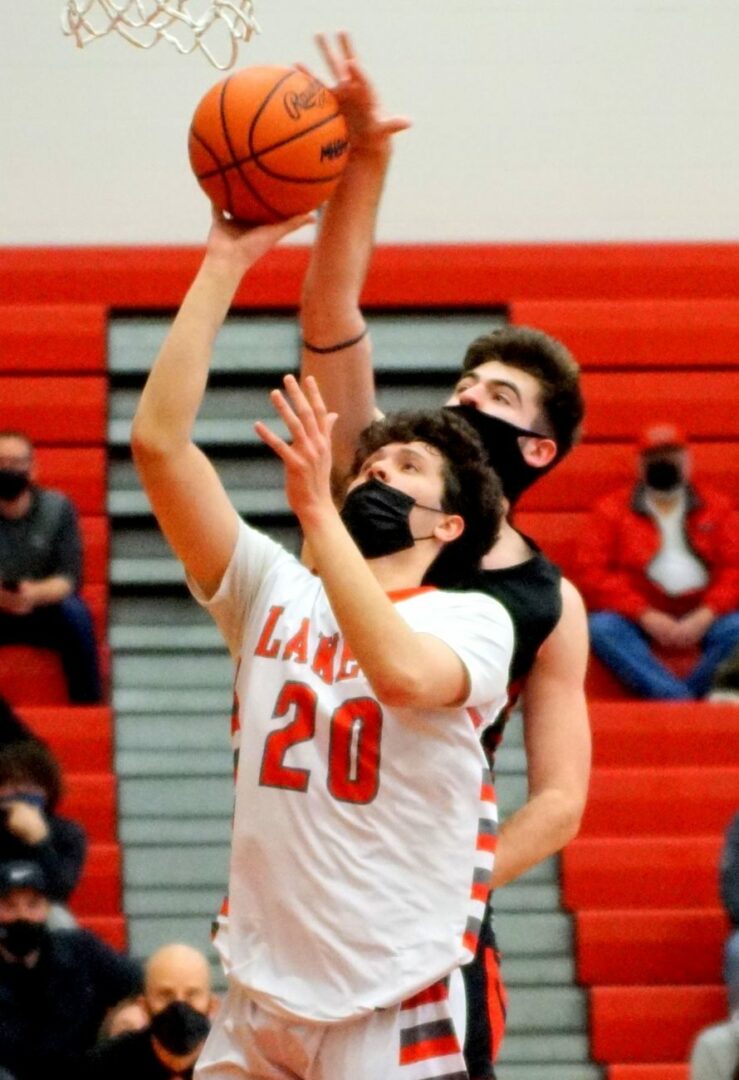