The Sailors almost always come away with a win, because they have a great mix of experienced players and talented youngsters who seem to rise to the occasion. 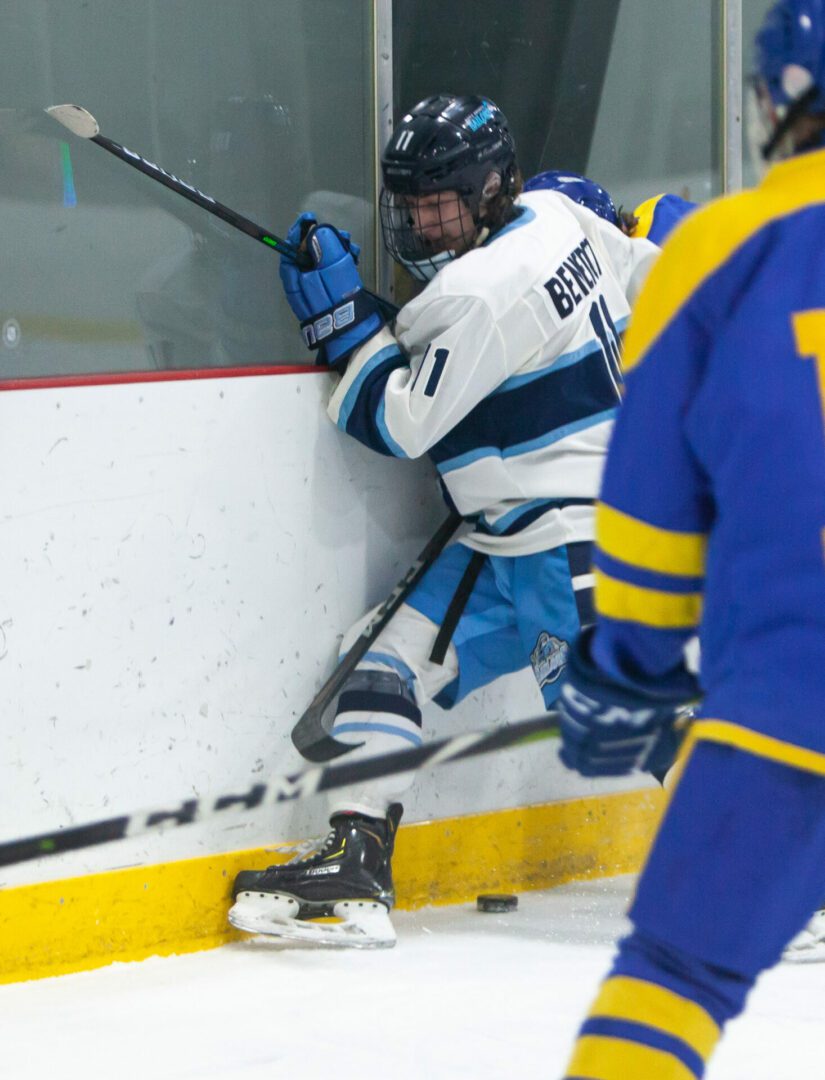 Trent Benedict fights for the puck along the boards for Mona Shores. Photo/Jason Goorman

On Saturday the hero was sophomore Trent Benedict, who exploded for five goals to lead the Sailors to an easy 7-2 victory over the Midland Chemics in the Stan Konrad Memorial Showcase at Muskegon’s Lakeshore Ice Centre.

Mona Shores was supposed to play Reeths-Puffer in the game, but the Rockets withdrew due to COVID issues, which led to the last-minute matchup with the Chemics.

The Sailors played most of the game in the offensive zone, which was evident from the shots on goal total, which favored Mona Shores 49-11.

“It’s been our focus that we have been working on a little bit more,”  said Mona Shores Chris Benedict, whose team improved to 11-1 on the season. “Just trying to make (opponents) uncomfortable and not give them an opportunity to make a clean exit out of their zone. The longer they are in there, the more tired they get and the more chances we get.”

Trent Benedict certainly made the most of his chances, with his five goals tying the school record previously set by his linemate Ty Langlois. Benedict now has 16 goals and 13 assists on the season, and is second on the team in scoring behind fellow sophomore Jake Nanna. 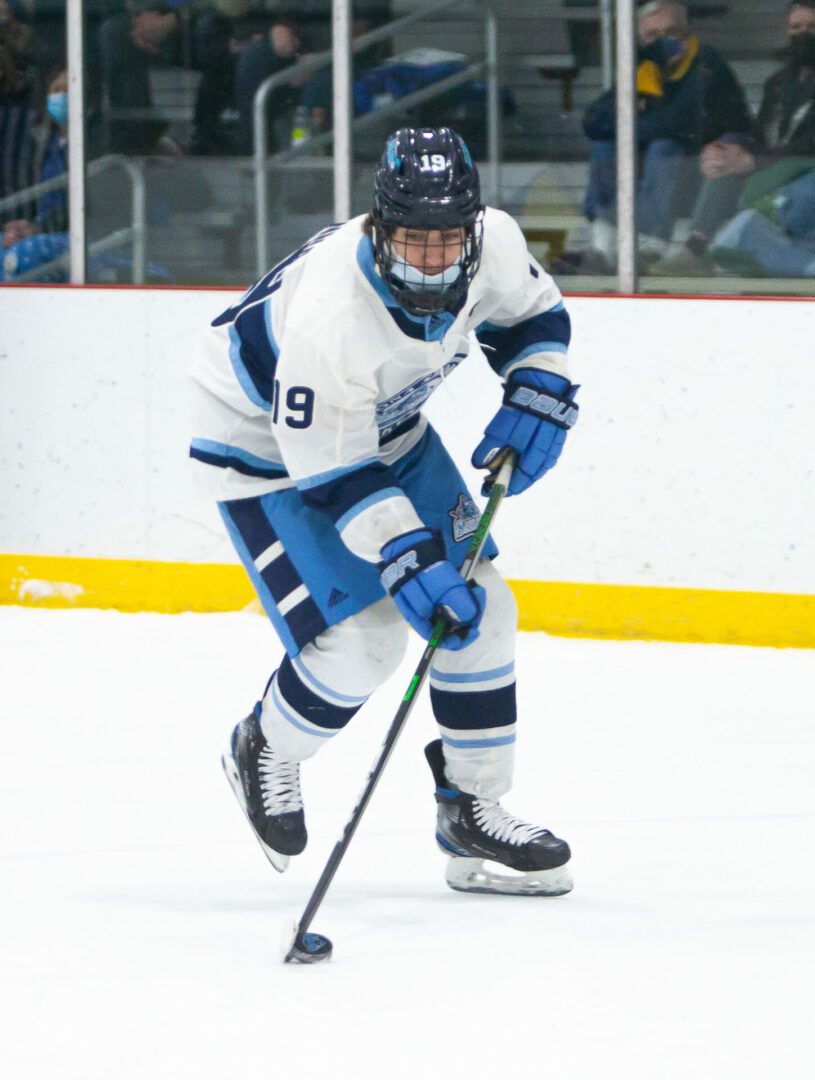 Jake Nanna moves the puck for the Sailors. Photo/Jason Goorman

“Trent has been playing well this season, and honestly all of these guys rely on each other to succeed,” said Coach Benedict, who is Trent’s father. “If Trent is having an off night, someone else is having a big night. These guys have each other’s backs and are always ready to pick up where someone leaves off.”

A key turning point in the game came in the second period. With the score 2-1 halfway through the period, the Sailors took two minor penalties less than four minutes apart. But the Sailors’ penalty-killing unit killed off both situations without allowing a goal, and less than two minutes later, Benedict’s third goal of the game extended the lead to 3-1.

“I was disappointed after Midland’s first power play (when the Chemics scored),” Coach Benedict said. “We got caught puck watching, and weren’t quite as aggressive as we like to be. We made an adjustment during the first intermission, and they did a nice job after that.”

Benedict opened the scoring just 46 seconds into the game when he threw puck on goal from about 50 feet away and it found its way into the Midland net.

“It was good to get the first one during the first shift,” Benedict said. “I was in the right spot at the right time. My linemates were feeding me and they were going in.”

With 10:40 left in the first period, Benedict struck again, this time on a power play, finishing off a feed from Nanna. Midland’s Cole Carpenter scored on the power play with 7:20 left in the period, making the score 2-1 at the first intermission.

The score stayed the same until Benedict deflected Tyler Snoddy’s shot from the point into the net in the second period, and the Sailors led 3-1 at the second break.

Benedict added two more goals in the third period, and Matthew St. Martin chipped in with the first two goals of his varsity career, as the Sailors pulled away down the stretch. 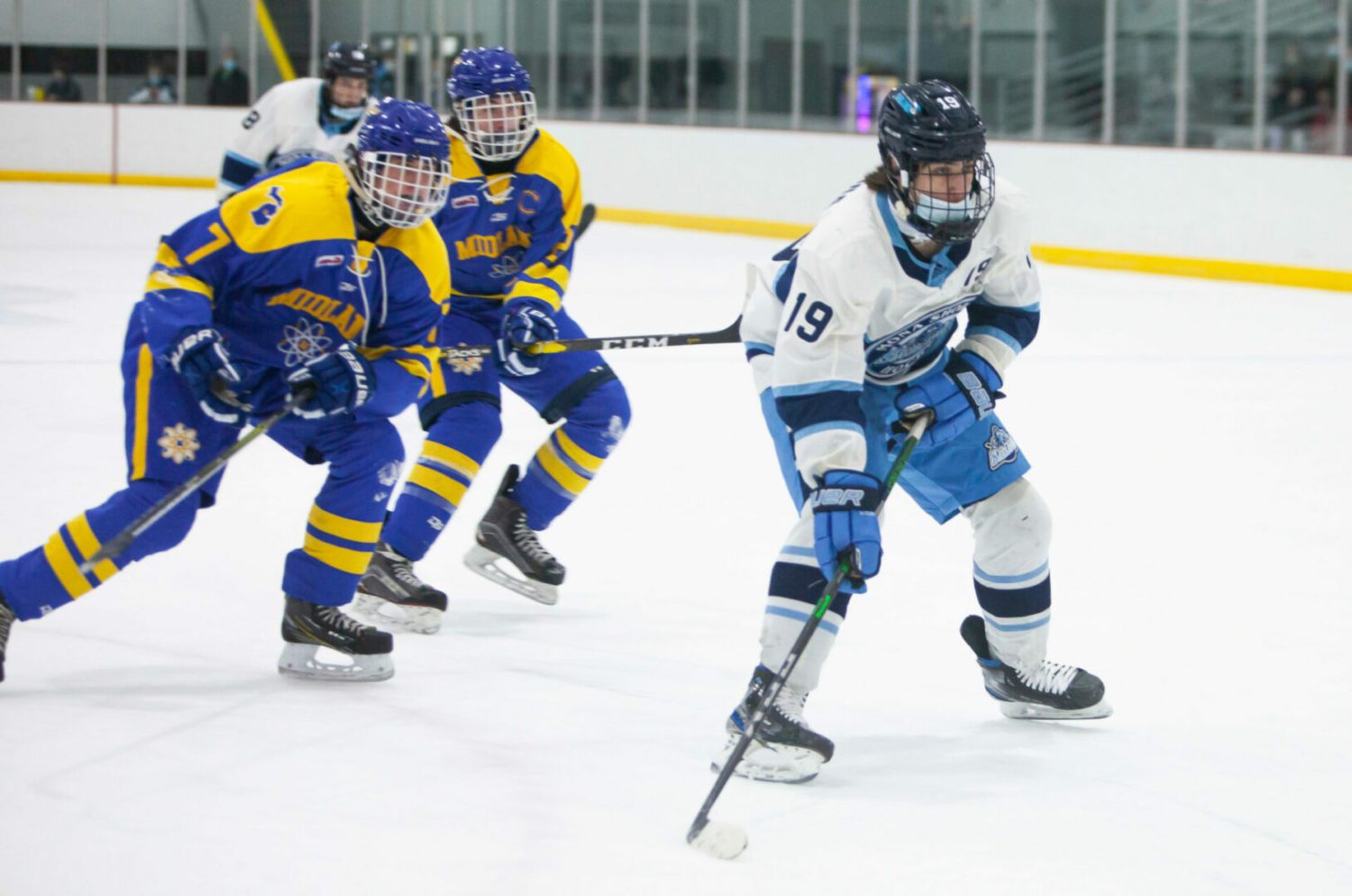 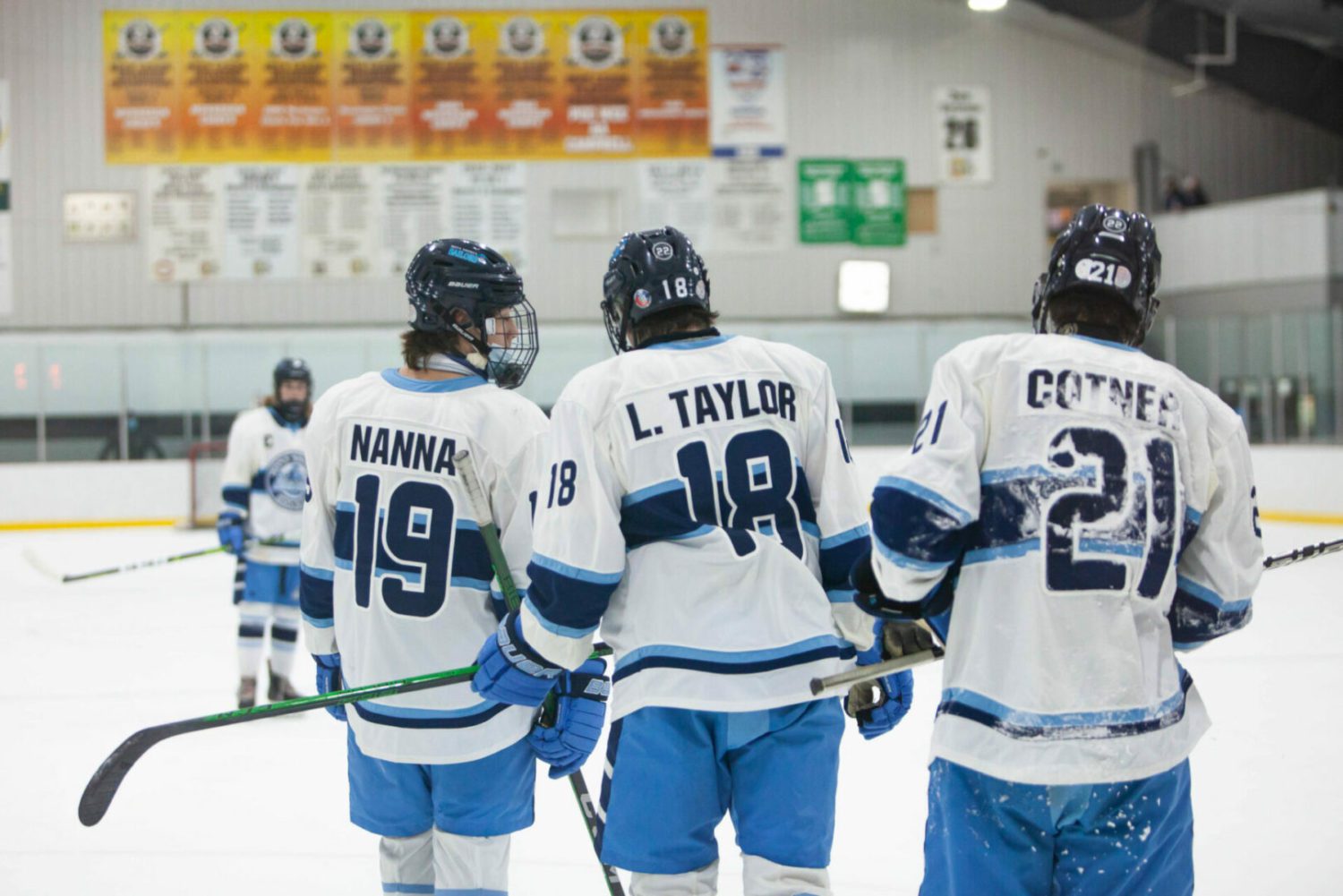 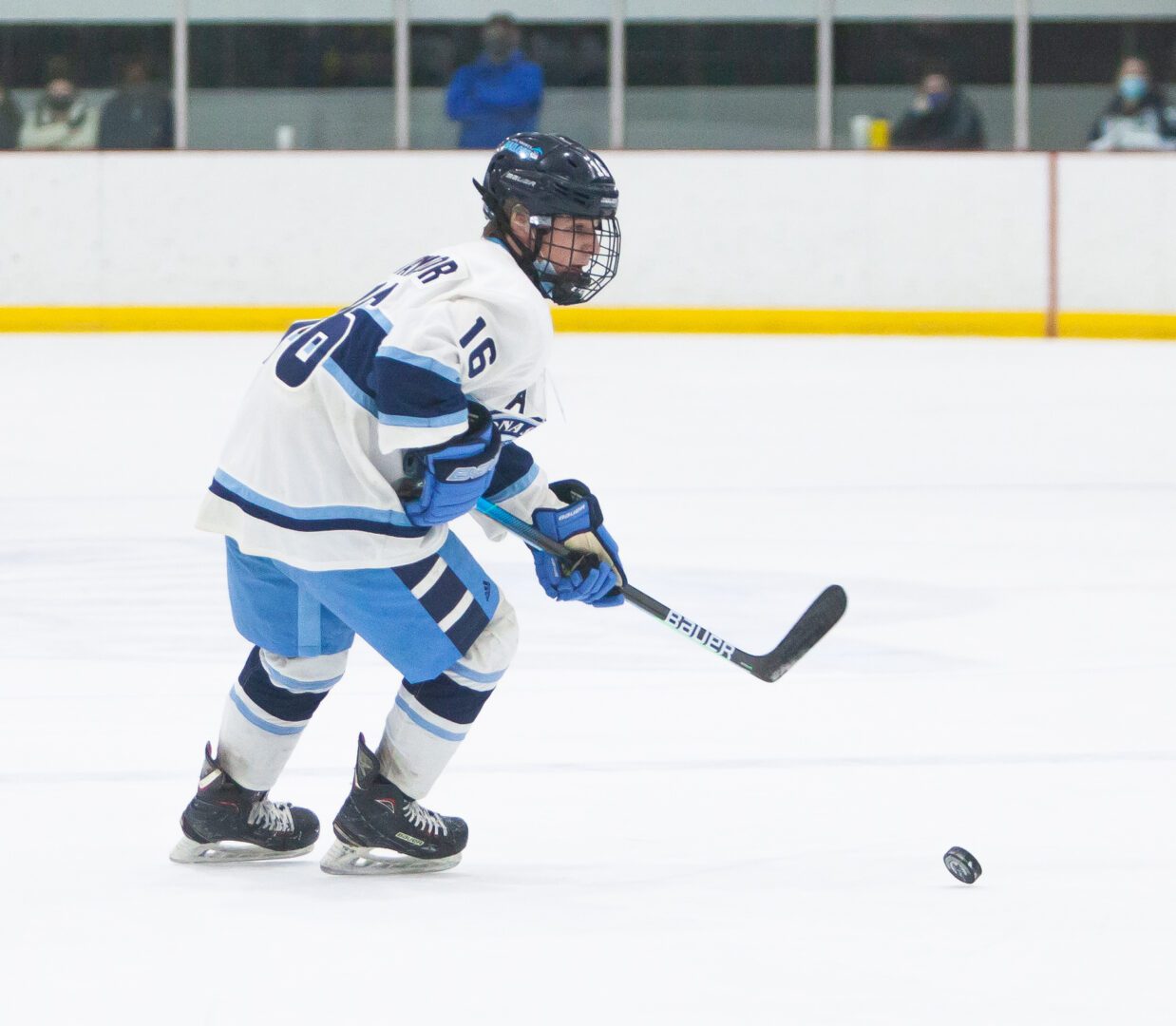 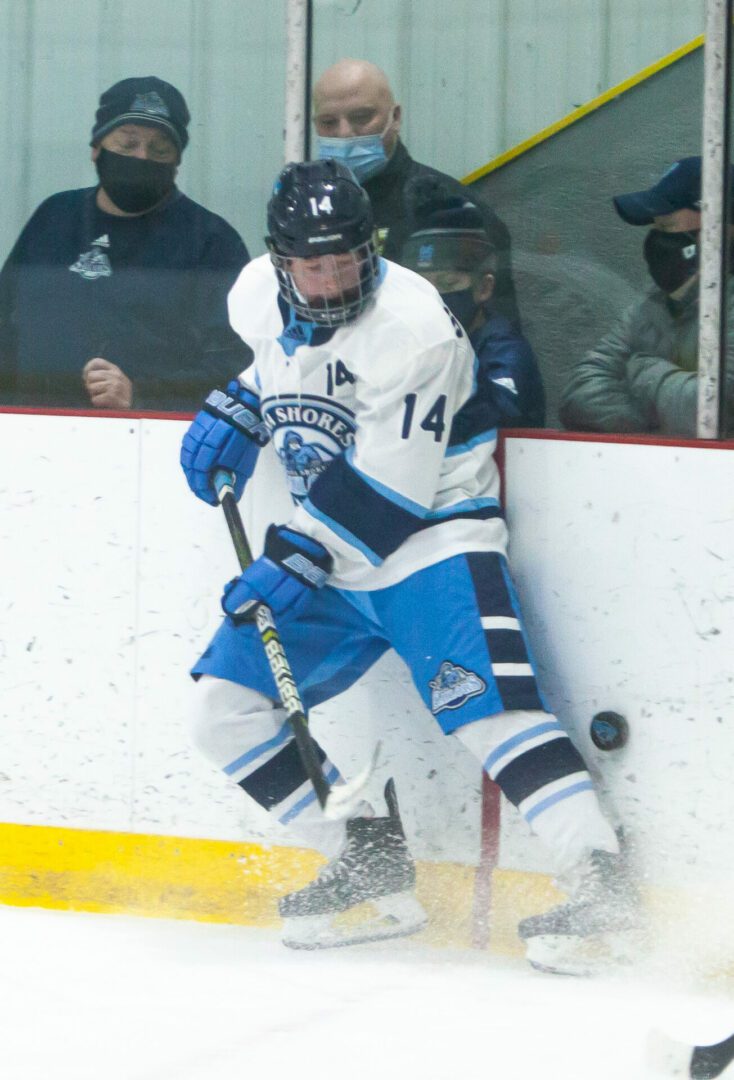 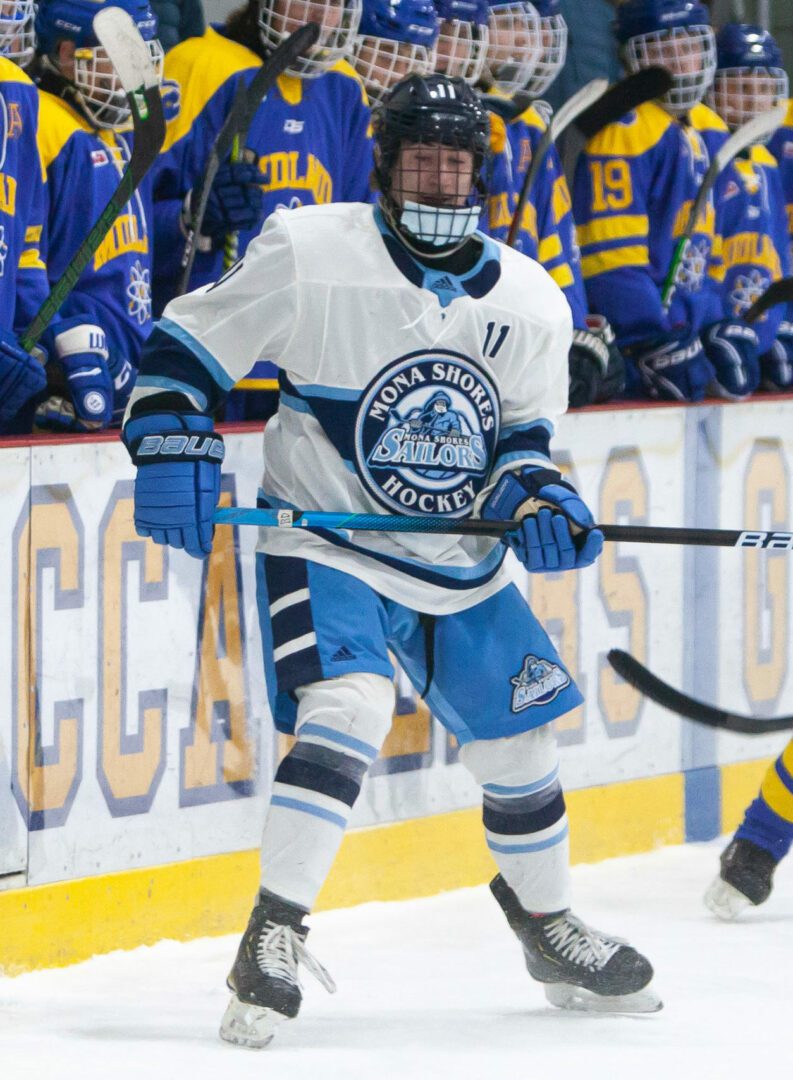 Mona Shores’ Trent Benedict watches the puck after sending it along the boards. Photo/Jason Goorman 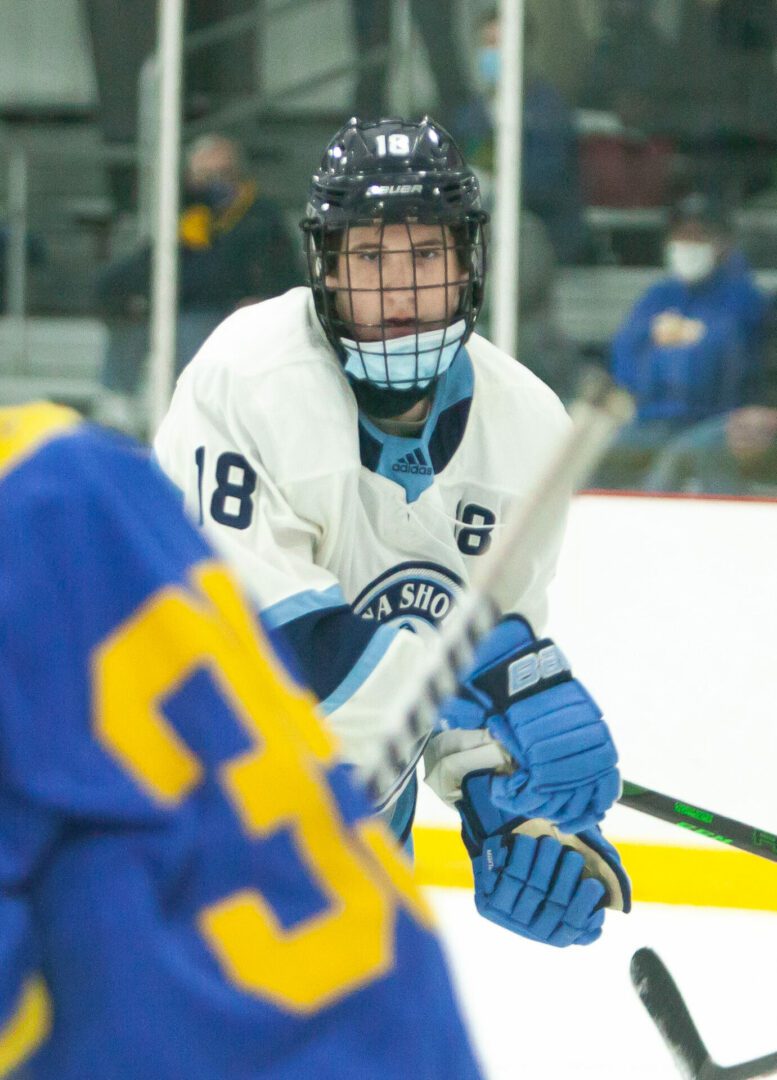